Wouldn’t it be great if we could play all major and minor chords with just three chord shapes? Fun fact: We absolutely can. In this blog post we’ll go through some smart tricks that help you decipher the fretboard.

It’s a rookie mistake to think that every chord has its corresponding unique shape on the fretboard. But it’s not strange at all to think this, because the first chords we learn are all situated at the top of the fretboard, and they all have idiosyncratic finger positions.

The E string as the musical measuring tape

Playing all the possible major and minor chords is easier than you think. Let’s enter the domain of barre chords. It’s times to leave the stringent austerity of the top of the neck and bounce around on the far reaches of the fretboard.

You can do this by learning the musical math of the E string. We call it math, but what we actually mean is that you drum a list into your head. Because the lower E string happens to contain all the root notes necessary for making chords.

At the top of the neck the nut catches all the strings and now your index finger will take over this function.

One of the first basic chords almost every guitarist learns is E major. Now think of the shape of the E. Do you see it? Now slide this shape up one fret. Which chord is this? Yes, it’s a potential F. There’s just one thing missing: Your index finger. At the top of the neck the nut catches all the strings and now your index finger will take over this function. 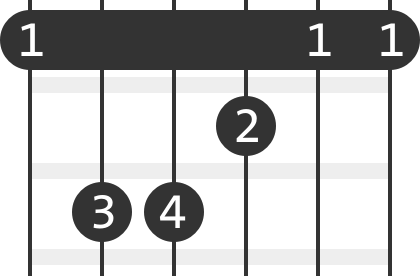 In this case it means that your index finger is placed from top to bottom over the strings on the first fret. Your ring finger and pinky are pressing down on the third fret A string and D string, while your middle finger firmly presses down on the second fret G string.

Let's use our trick again. Put your fingers in position for an Em, slide it all down one fret, and with your index finger press down every string on the first fret. Give that chord a ring. That’s the sound of an Fm. What if you slide this shape down the fretboard all the way to the ninth fret? Correct, you’ve got a C#m. 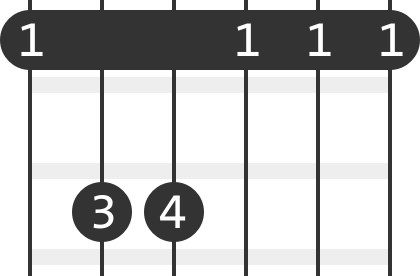 The A string as the musical measuring tape

Notes for the "A string" on the guitar neck.

First barre chord shape on the A string

This time we don’t start with a major chord, but with the Am. “Why start with a minor?” I hear you ask. That’s very simple. Check it out. Put your fingers in the E major position. Good. Now take this shape and move it up one string - not one fret but one string - so you hit the open A string first. Now strike this chord. 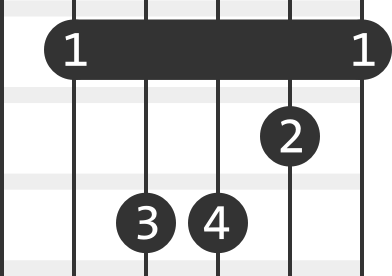 Minor chord shape with root on the fifth string.

Second barre chord shape on the A string

The key to unlocking the major chords on the A string lies in the A major shape. Can you play an A major? Slide this shape down one fret, and remember to place your index finger across the first fret. Hitting this chord gives you an A#. Now use the same shape with your index finger on the seventh fret and you hear an E. One fret higher, an F, and so the list goes on. 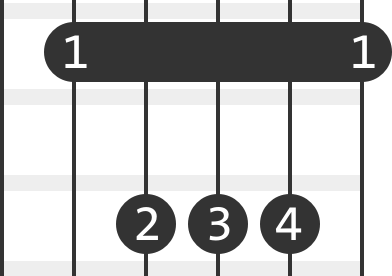 Mnemonic aid for better coordination I - the fifth fret

Now we have an overview of all the root notes and the corresponding chords on the E and A strings.

Yet, sometimes it can be hard to quickly connect note to fret.

That’s why we use three mnemonic devices. In standard tuning, pressing down a string on the fifth fret gives you the same tone as playing one string higher open. So pressing down on the E string fifth fret gives you an A, and the open string one higher is also an A. Doing the same from the A string gives you a D, and the open string one higher … also a D. The only exception is the G string. To get the note of one string higher (B) you have to press down the fourth fret.

When you arrive at the seventh fret you know that five of the six strings give you the tone of the lower sounding open string - which is the octave - (this time the exception is the B string, because the G is on the eight fret). It all becomes a lot easier when you know where you are right?

The final stop for your adventures on the fretboard is the twelfth fret. Should you ever get lost along the way, this is your North Star. The twelfth position - often indicated by two inlays on the neck - is the same note as the open string you are currently playing, only higher. It’s the octave of each open string.

Okay, that’s a lot of knowledge at once.

It makes sense that this doesn’t stick right away. And that doesn’t matter.

It’s a foundation upon which you can build, and you can use it anyway you like.

Feel free to drop questions and thoughts in the comments section below.

Teo Lazarov is a journalist, entrepreneur and musician. He writes for the Chordify blog and founded the online magazine DATmag. If he isn’t writing or interviewing, he plays bass in his band called Baa$. The result of a mad experiment in which the DNA of Pantera and Ice-T is crossed with that of Bruce Lee and The Predator.

Teo Lazarov is a journalist, entrepreneur and musician. He writes for the Chordify blog and founded the online magazine DATmag. If he isn’t writing or interviewing, he plays bass in his band called Baa$. The result of a mad experiment in which the DNA of Pantera and Ice-T is crossed with that of Bruce Lee and The Predator.