What is the best amp for a Gibson Les Paul Studio? (our top pick)

The Mesa/Boogie Mark V:25 is our top pick for pairing with a Gibson Les Paul Studio because, like the Les Paul Studio, the Mark V spans a wide range of styles. It can handle both classic and modern rock without sacrificing quality on either end. The Mark V series houses some of the best amps overall, regardless of the guitar pairing in question.

A lot of Gibson Les Pauls are paired with Marshall amps, and we've included a couple in the honorable mentions table below. But I wanted to recommend an amp that could put forward a distinctly modern tone flavor while also being able to handle the vintage, subtle tones of bluesy classic rock.

For years, Mesa Boogie has shown that they are particularly good when it comes to this balance. They're known for their modern edge and smooth, studio-quality distortion, but they can handle just about anything.

Here are a few specifics we like about the Mark V:

To be clear, the Les Paul Studio could be paired with a lot of other amps, and the Mark V could work with a ton of other guitars. But my two cents is that this guitar and amp make a particularly good pairing. If you disagree, we'll recommend some others in the comparison table below.

When answering a question like this we try to make sure our opinions are well-informed, well-researched, and based on personal experience. Musicians and guitar players are always writing this content first-hand. That said, it's still opinion and should be taken with a grain of salt. If you want to support us, you can use the orange buttons to buy gear yet at no extra cost to you. Either way, thanks for hanging out.

We've added the two Marshall amps I mentioned and the Diezel VH2 into the comparison table here. They're all fairly high-end amplifiers because I wanted to try and match the quality of the Gibson Les Paul Studio. If you're looking for some more affordable alternatives, we'll address that a few paragraphs down.

Note that ratings take into account pricing and value, not just overall quality.

We have a lot of amplifiers in our product database for easy comparing, and we add to that database regularly. Use this search tool to look at additional amps that might be good fits for the Gibson Les Paul Studio.

Launch the Gear Search Bar
Table of Contents (click to jump)
Compare the Mark V to honorable mentions
Pricing Tables and Resources for the Mark V (includes head and combo versions)
More on Marshalls
Is the Mark V too expensive?
What are the best features of the Mesa Mark V:25?
What are some cheaper brands that could be a good fit?
Conclusion 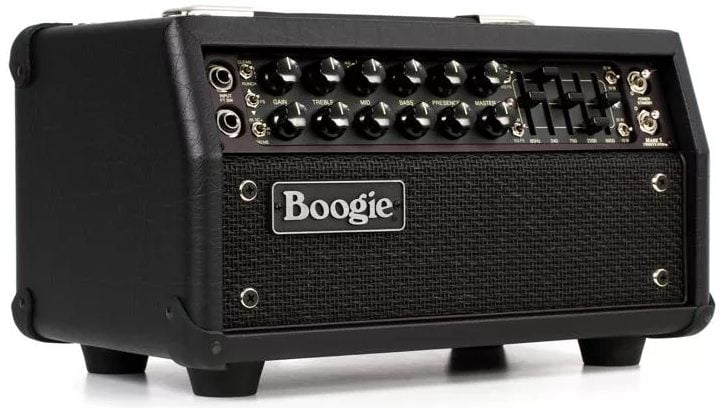 The Mesa Mark V:25 (or one of the larger, higher wattage versions) are one of the best amps for a Les Paul Studio.

The tables below update pricing for the Mark V in real time, from multiple vendors. Note that there are other vendors we haven't included, which is simply because we don't have agreements with them in place to pull pricing.

Guitar Center and Musician's Friend are two such places, and also good places to look for further price comparison - we just can't show it here.

Also note: We've included the combo versions of the Mark V:25 as well, which is a little more expensive.

I've recommended two Marshalls in the honorable mentions table, and I get why a lot of people might prefer some kind of Marshall to be paired with the Gibson Les Paul Studio.

Because Les Pauls and Marshall amps have been synonymous for a long time.

But I find a lot of Marshalls just a little too bright for my taste, and I've always liked the Mesa distortion channels a lot better. Plus the Mark V has a built-in attenuator, which means you can actually use it without a speaker cab.

You can even use headphones.

So it's not that I'm hating on Marshall. It's more so that the Mark V is just a great option. To be fair, among the full Marshall and Mesa tube amp rosters, there are a ton of amps that would be excellent fits for the Les Paul Studio.

Is the Mark V too expensive?

There are actually several different versions of the Mesa Mark V. The differences are the following:

The higher wattage and combo versions are more expensive. Though the Mark V:25 is one of the cheapest options and usually retails just a little higher than the Gibson Les Paul Studio itself.

I think that spending around the same price on your amp as you do on your guitar is a good move.

You don't want to get a great guitar and then cheap out on an amp.

Your amp has a lot to say about how good that guitar will sound.

I think the Mark V:25 is at a good price point.

What are the best features of the Mesa Mark V:25?

Here's a summary of the features we like about the Mark V:25 that have led us to recommend it for your Les Paul Studio:

What are some cheaper brands that could be a good fit?

But there a couple economical brands I'd recommend checking out:

I've been really impressed with Blackstar lately. They do a lot of good work without a lot of cost. They're your next stop if you don't want to spend too high.

I've always been partial to Mesa amps, so there's subjectivity involved with my recommendation.

That said, I do my research and have used these amps. Take my recommendation and the honorable mentions with a grain of salt. If the Mesa Mark V isn't your cup of tea, look around in similar price ranges with similar specs.

I'd at least recommend holding out for an amp with two channels and a decent onboard gain.

If you have questions, drop them in the comments section below and I'll help out as much as possible.

Best Amp for a Telecaster (our top pick)

Best Amp for a Telecaster (our top pick)