Elixirs are ideal for beginner electric players because the coating actually makes movement across the strings (fret to fret) easier and smoother. The added lifespan of the coating also saves beginners from having to change strings as often, which can be a time-consuming chore in the earlier playing stages.

Beginner guitar strings should be smaller, lighter and physically easy to play. The only real way to get strings like this is to buy sets that use a smaller gauge, preferably labeled as light or extra light. Since acoustic guitar strings are often wound with a phosphor bronze material, they're naturally bigger and more difficult to play than electric guitar strings. In contract, electric strings are wound with nickel, which is a little bit lighter and softer than the bronze acoustic strings.

This makes electric guitar - which isn't often thought of as a beginner instrument - an easier instrument to play from a string perspective.

Targeting electric guitar strings specifically for beginners should focus on these features:

All of the strings electric string we'll recommend for beginners will have one or more of these features. We'll avoid heavier, thicker gauges while including mostly lighter sets with a low E string at .042 or lower. If you want to browse some more string options for acoustic, electric, or bass, checkout our best guitar strings roundup article. Coated strings are generally faster and easier to play than non-coated strings, because it essentially levels out the nickel winding. Elixir actually makes several different types of coating, where the POLYWEB version produces a warmer tone and is - in our estimation - easier on the fingers and hands. Their "super light" set goes from 09 to 42, making it their lightest electric string set that we know of.

Coated strings will provide a noticeably smoother playing experience and a better overall tone. The only issue with the coated Elixir string is that they're expensive, partly because they also last a lot longer than the traditional non-coated string.

As a beginner electric player, you might not want to buy them in bulk and instead try a set to see if you like them and want to stick with them.

They're our favorite string to recommend in most situations. 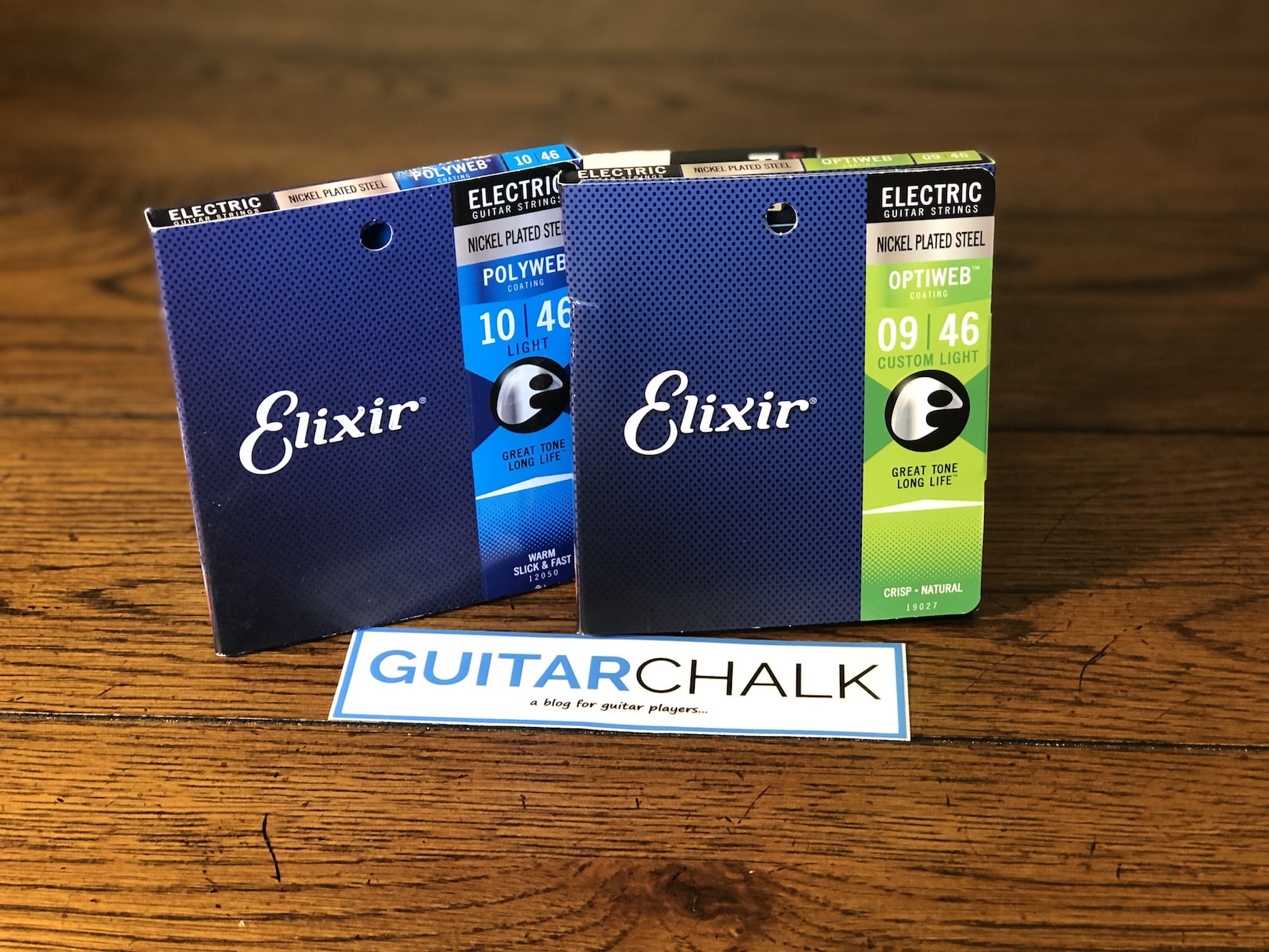 Elixirs are pricey, but well worth it.

IDEAL FOR: Clean tones, quick movement, and all styles The Classic Rock N Roll version of Ernie Ball's Extra Slinky strings are light and easy to bend, perfect for beginners who are trying to break in their fretboard. At .038 on the low E string it's one of Ernie Ball's thinnest available gauges, though still produces a warm vintage tone that pairs really well with a tube amp.

Despite being a smaller gauge, chords sound full and well-sustained, while single notes and melodies ring clear with lots of definition and character. There's also plenty of emphasis on pick scrapes and subtle right hand movement.

A lot of jazz and blues artists like these string sets for their warmth and ease of play, though they can work in just about any musical style. The winding on the larger strings is pure nickel around a high carbon steel core and a fairly common recipe for electric strings.

IDEAL FOR: Beginners who want a smaller string that's easier to play The main attraction these strings put forward for beginners is the extremely slim gauge, coming in slightly smaller than even the Ernie Ball set we looked at earlier. Ranging from 07 to 38 they're the smallest set on this list. Here's a quick look at the gauge of each string, light to heavy:

While Dunlop strings aren't nearly as popular as Ernie Balls, this Billy Gibbons set does come in as the smallest gauge we recommend.

It'll make learning chords and short melodies much less of a physical issue, allowing you to focus on memorization and fretboard-related head knowledge.

Like the first two sets, these strings are nickel wound, though give off a slightly "hotter" more twangy resonance, especially when played through a clean tube amp.

IDEAL FOR: Lead electric guitar and beginners who want an easy string to learn on The Super Slinky is from Ernie Ball's "main" electric string line and is a little heavier than the Rock N Roll string set we recommend earlier. At 09 to 42 they're essentially an un-coated version of the Elixir set, and a much cheaper alternative. We'd recommend these if you're a beginner who wants a thicker, more chord-friendly tone and you plan to dabble less in lead guitar. Even 42 is still a fairly small string set, which means they'll still be easy to play.

IDEAL FOR: All skill levels and situations D'Addario's take on a super light electric string set boasts a uniquely magnetic type of steel, which is supposed to produce a brighter, more aggressive sound. We do find the Pro Steels to be a more intense and bright-sounding string, similar to the Dunlop Billy Gibbons set. At the same time, this is a common characteristic of lighter gauges, so it's hard for us to tell if that's due to the claim of a unique type of steel or just the natural resonance of the strings.

There's definitely a richness and brilliance to their clean tone, so we're content to recommend them as a good alternative for beginners who want a string focused on lead guitar and melody.

While these sets are slightly more expensive, they do advertise being "corrosion resistant" though are not coated.

IDEAL FOR: All skill levels and situations

The Best Electric Guitar Strings for Beginners: How We Picked

If you have these three things, you've solved a large portion of the equation. But in addition to these factors, we also rely heavily on our first-hand experience with each string set we recommend. So yes: We actually play guitar and use these strings.

We're not writing about something we just looked up and read a review or two on.

These are actual recommendations of items we've had in our hands.

We draw on actual, first-hand experience with these guitar strings.

At the same time there are some more general features and quality indicators we can look at when it comes to reviewing electric guitar strings. Namely, we're considering the following aspects:

What are common electric guitar string features to watch for?

What do guitar players need from a good set of strings?

There are a handful of commonly asked questions which we'll cover in this section. If you have additional questions, feel free to drop them in the comments section below.

Are coated electric strings a must-have?

There's no denying the fact that coated strings, whether you're dealing in electric or acoustic guitars, have a much longer lifespan and tend to sound better than their uncoated counterparts.

At the same time, there are plenty of pros that don't use coated strings and even prefer the grittier sound and feel you get with uncoated roundwound guitar strings.

So no, they're not a must but there are some significant benefits that are hard to ignore.

In short, it's a question of whether or not you want to pay the extra cost for the additional lifespan.

While it's somewhat contingent on the gauge and size of the string, coated strings are less likely to break than uncoated strings. This is simply because they have more reinforcement and less space between each winding.

How long do electric guitar strings last? How often do they need to be changed?

For uncoated electric guitar strings, you're looking at an average lifespan of two to three months.

Coated electric guitar strings, like Elixirs, can last much longer. Six to eight months is typical.

Obviously this depends a lot on several variables.

The main issue is how much time you spend playing.

I would say yes, especially for electric guitar.

Since electric guitar involves more lead technique like bending , thereby requiring a greater degree of string manipulation, the best electric guitar strings for beginners should always be a lighter gauge.

Do you need tools to change electric guitar strings?

We'd recommend using a peg winder to change your electric guitar strings, though you can do it by hand if need be. This article shows you the process in pictures.

This three-in-one winder and string cutter is what we use.

Why are the smaller electric strings unwound?

You'll notice that on most electric string sets, the G, B and E are unwound, left to only the steel core in its varying size. This is a normal aspect of steel string construction which winds the low E, A and D strings, but leaves the other three unwound to more easily achieve the balance of size and tone between the six strings.

What are some signs that my electric strings need changed?

Electric guitar string age tends to be a little tougher to diagnose than acoustic guitar strings, just because they don't discolor quite as much. Still, you might notice a darkening or staining, especially on the thicker wound strings above the fret separators.

You should also be able to hear a distinct drop in tone quality or loss of sustain.

Particularly if you hear a lack of thickness or weight in your tone, it could mean your electric strings need switched out.

Almost every electric guitar player will develop a bond with a certain set of strings as they learn the instrument.

Yet, beginners often go into string buying without knowing where to start or what to look for.

This list is simply a recommendation of where to start, made by people who have actually gone before you and used these strings sets. It'll at least give you baseline to work with and get you familiar with the more popular and common options.

Once again, if you have questions about the strings we've mentioned or even sets we didn't list here, feel free to leave them in the comments section below.

Written by GC Editorial on Strings and Roundups

Written by Bobby on Strings and Roundups