While the PRS Holcomb and Custom 24 (SE series) rate a little higher, we like the Gibson Les Paul Studio most since it fits better in our allotted price range (around $1500-$1700 in most markets). It gets you the Gibson brand name and tone for a fraction of what more expensive versions like the Classic and Custom will run you.

For those that don't want to take my word for it, I'll talk some about how we came to these specific picks.

How We Chose the Best Electric Guitars Under $2000

At Guitar Chalk we only recommend guitars we've actually held, used, tested, and researched thoroughly. As a result, we'll recommend many guitars for multiple scenarios.

Take the Fender Stratocaster, for example:

That guitar can work in a ton of different situations, and between myself and the handful of folks that help with this site, we've owned/played several versions of them.

This means we regularly write about the Fender American Stratocaster, which runs between $1500 and $1800 - perfect for our under $2000 article.

The main point is that we use and test guitars before recommending them.

What features do we look at?

For electric guitars under $2000, we have a set list of features that we want to see before we make a recommendation. They include the following:

All of these are features we like to see in a guitar in this price range. What this doesn't mean is that each guitar has all of these features. Just be aware that this is a rough list of priorities we use to recommend electric guitars under $2000. When you're paying that kind of money, we want to see at least some of these features included.

Note that we partner with Sweetwater (via the orange buttons) to provide links to gear we mention, yet at no extra cost to you. It's a simple, non-intrusive way to support our site. If you like to shop at Sweetwater, consider doing so through our orange button links below and we'll keep the content flowing.

In this chart we've listed all six of the electric guitars that we'll highlight. If you want specific pricing and info, click on the "Compare" button to add it to a compare chart. You can compare up to four electric guitars at a time. If you have questions, drop them in the comments section below.

The PRS Custom 24 is normally a $3000+ dollar guitar, but the SE version gets it down in the $1200 range and still keeps the PRS brand, right down to the birds on the fretboard. A second version of the SE Custom called the "Floyd" comes with a Floyd Rose locking tremolo system that improves functionality, tuning stability, and just looks awesome.

We like this version of the SE Custom 24 for lead-focused players who will take advantage of the whammy bar and locking tremolo system. It's also a versatile instrument that can handle both lead and rhythm duties

A lot of people swap out the pickups in the upper-tier PRS SE guitars because they're stock PRS. While that's certainly an option, I've tested these pickups on several guitars and they don't sound bad.

They're stock, yes - but they aren't as much of a downgrade as you would deal with on something like a cheap Epiphone or Squier Strat.

This particular set is workable and doesn't need to be replaced if you want to keep them for awhile.

Mark Holcomb developed several versions of his signature PRS, including the non-SE (more expensive) rendition and the seven string version. We're highlighting the cheaper SE in the six-string version, which is one of the more popular SE model electric guitars, and one of our favorites because of its versatility.

Per Holcomb's playing style, his signature SE can handle a wide range of both lead and rhythm styles.

It even ships with Holcomb's signature Alpha and Omega Seymour Duncan pickups, giving it a leg up over the SE Custom 24 "Floyd" in the pickup column.

We'd like to see the Floyd Rose and locking tuners here as well, but in a world where we had to choose between the Floyd and the pickups, we'd take the pickups.

We like this model for speedsters that also dabble in a lot of rhythm guitar. Also, if the pickups were an issue for you in the previous SE, go with this one instead and you won't have to worry about an upgrade.

IDEAL FOR: Speedsters that also play a lot of rhythm

The American version of the Telecaster is one of the nicer models, made for professional players in a wide range of styles. Sometimes they can get noisy (even the nicer models), but it's still comfortably under the $2000 price range at $1600, which gives us room for a new set of pickups.

We'd recommend going with something like the Fender Noiseless Telecaster pickup set from the Custom Shop.

Look for the "Noiseless" tag on Pickup replacements for the Telecaster.

Otherwise, the American Telecasters are fantastic, all-around electric guitars, that can hang in almost any musical style. I've always liked them more with a clean tone, which leads me to recommend them especially for styles or players that play clean more often.

A little bit of tube amp breakup sounds great with the Telecaster twang as well. In the $1500 to $2000 price range, they're tough to beat.

IDEAL FOR: Country, clean tones, and anyone who needs a versatile electric guitar

Just like the Telecaster, the American Stratocaster has a wide range of appeal to a lot of different musical styles.

The Stratocasters tend to be a little brighter, with a more brisk response, especially on the higher register. As a result, I typically recommend them more for guitar players and styles that are more strictly lead focused.

You'll have less noise issues to worry about, and you still get the versatility we like about the Telecaster.

The Les Paul JR is one of the cheapest ways to get your hands on an actual Gibson, without spending over two-grand. It's usually going to be configured with one or two P90 pickups (the dog ear design), which is par for all the junior series LPs. We like the JR series for classic rock and hybrid lead/rhythm styles.

It's also just a great way to get your hands on the Gibson brand, if that's your goal, without spending too much. The mahogany body is also a bit smaller and lighter, perhaps a better fit for smaller players or those who prefer a less bulky electric.

If the JR still doesn't feel like a "real Les Paul" to you, the Les Paul Studio almost certainly will. It's a real-deal Les Paul design that is just basic enough to get you into the $1600 price territory.

Just like the JR, it can handle a wide range of styles along with both lead and rhythm duties.

The pickups don't need replaced unless you want to go for a specific style, and everything else on this guitar is top quality. It's comfortable to play with modern weight relief and sounds fantastic both clean and with heavy distortion.

For our price range, you can't go wrong with the Les Paul Studio series.

Most of the Gibson guitars use a Mahogany tonewood as the base for their bodies, which is what we see in the Les Paul JR and the Studio. In this price range, we like to see added features like a gloss polyurethane finish and some careful body carving.

If that's your priority, we'd say the carving and finish on the Mahogany base from the Les Paul Studio is your best bet.

Fender typically uses a solid piece of Alder, which is also good for the lighter playing styles and more airy sounds.

If you're prioritizing pickups, we always recommend going with one of the following third party builders:

The Fluence Modern humbucker by Fishman

I trust these companies and recommend them for pickup production.

And if you don't get a guitar that comes with them, consider doing a pickup upgrade and adding them later. As for this list, the best pickups would have to be on the Mark Holcomb PRS with the Seymour Duncan Alpha and Omega set.

If you're prioritizing pickups, go with that guitar.

Spending this amount of money guarantees you're getting a reputable brand name, and avoiding the "eco brands" like Squier and Sterling. Everything we've recommended comes from brands with well known and respected reputations. 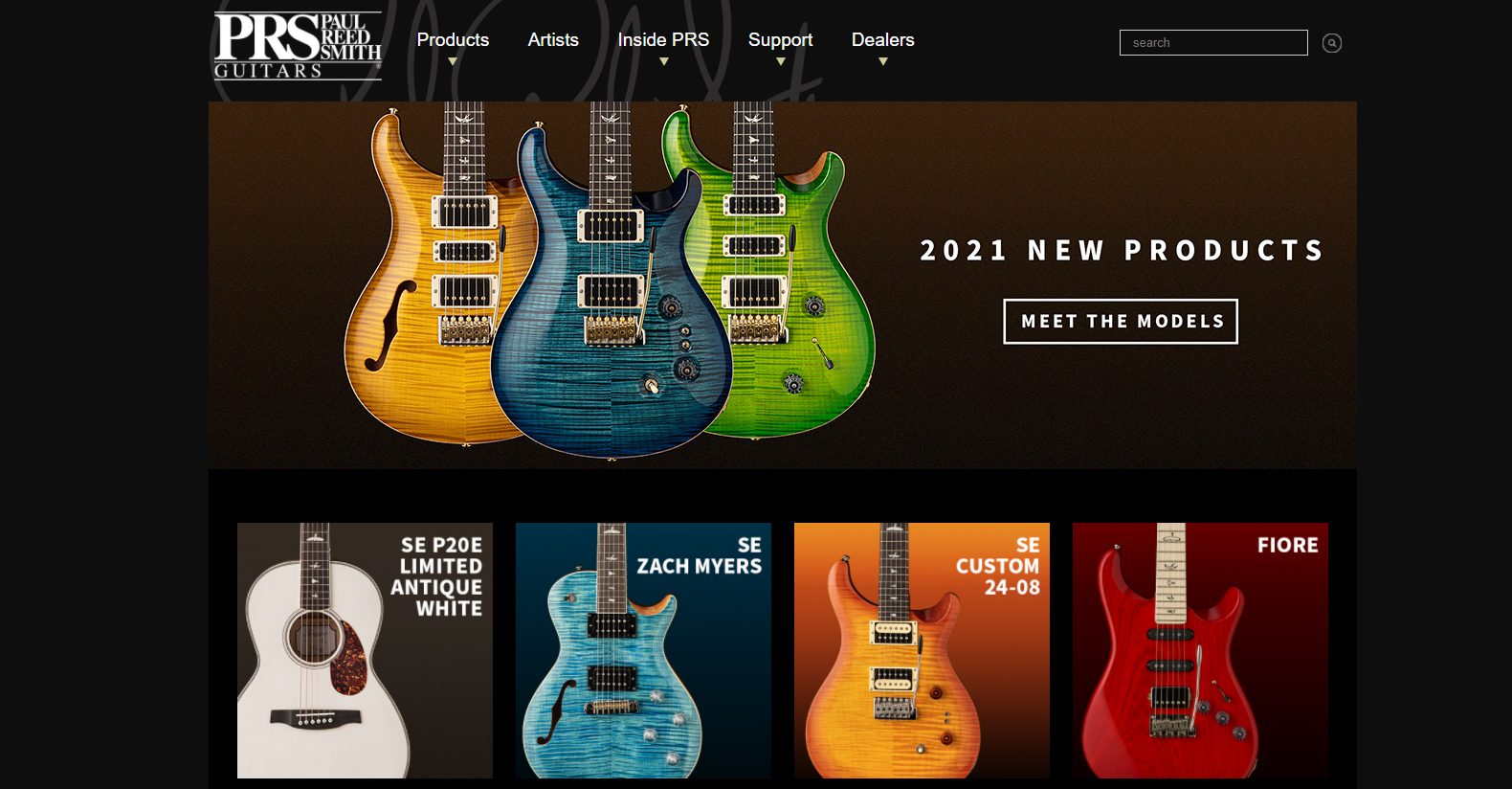 Once you cross into $1000 guitars, tone quality can get pretty subjective.

What sounds good or "ideal" to someone might be perceived differently by someone else. That makes it hard to define the "best" tone in this price range.

However, we can recommend different guitars for different styles, which we've done a lot of already in the product highlight. However, we'll do some summarizing here to clarify our recommendations.

For the blues player that leans towards more of a lead playing style, we'd say the American Stratocaster is your best option for accommodating.

For faster rock and percussive playing styles, we'd recommend the PRS SE Mark Holcomb, based on Mark's own playing style and the Seymour Duncan pickups.

For classic rock, we'd go with the Fender Stratocaster for more lead styles and the Les Paul JR for rhythm styles.

Versatility score is a metric we give to guitars to indicate how well they can cross over into other styles. In our grading system, the PRS SE Custom 24 and Fender American Telecaster are the two most versatile options from this list. They can both handle a wide range of style application.

Looking primarily at a cost to quality ratio, it's almost impossible to beat the value of the PRS series, though we're pretty happy with the Studio's price point as well. If your goal is solely to get the best bang for your buck, the PRS SE Custom 24 - the Floyd or non-Floyd version - is your best bet.

In the following chart you can see how each guitar in this list stacks up against the others with our overall rating and subsequent price tag. While certain aspects of this are subjective, you can see that the two PRS guitars are your best bets by a fairly wide margin. 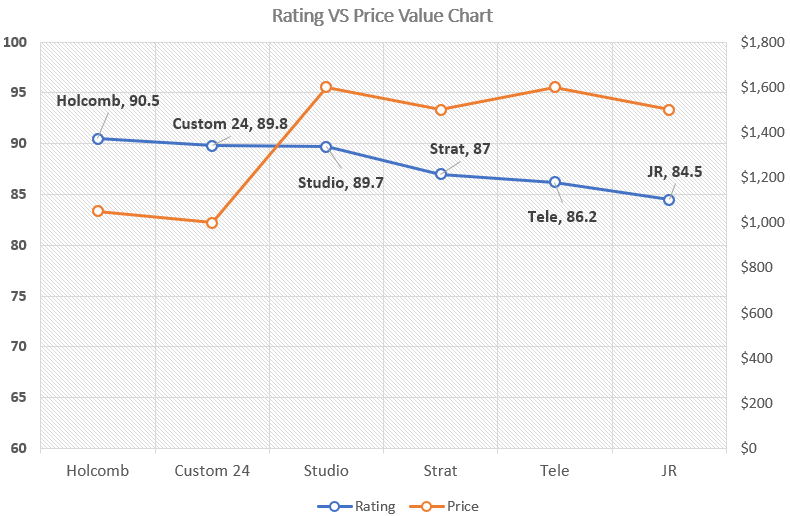 Value chart that plots overall rating of each guitar against price. High blue and low orange is better.

Do you have questions about our roundup or how we put together area reviews? Based on guitars we've used, tested, and worked with, these are the best electric guitars under $2000 that we can recommend.

If you have additional questions, drop them in the comments section below and we'll chat about it.