This is a roundup of electric guitars we recommend for playing lead-focused styles, which includes soloing and the more melodic side of playing guitar. As such, these guitars play fast, and have features that have made them popular with professional and amateur lead players over the years.

They're ideal for playing fast and for focusing on single notes more than rhythm and chord progressions.

For those interested, here's our roundup of electric guitars for rhythm.

We'll recommend six guitars in this list that we've used and have direct experience with, that have also been popular over the years with lead guitar players.

If you're a lead guitarist, or you want to get into the lead playing style, these guitars are great options.

These recommendations can at least get your hunt started, and help you get searching in the right directions.

This is a section where we setup a comparison table for the guitars we've recommended. Keep in mind, we use Sweetwater links to support Guitar Chalk, but at no extra cost to you. Please consider buying through our orange Sweetwater buttons to help us continue producing content.

Curation of reviews from Sweetwater, Guitar Center, and Amazon

The Fender Player Stratocaster is the baseline Strat model with Alnico single coil pickups and a history of being a preferred, lead-focused electric guitar. A more brisk and brighter tone profile - because of the Alnico single coil pickups - and a C-shaped neck (that's designed to play fast) make it one of the most ideal electric guitars in the business.

Tons of well-known lead guitarists, including Jimi Hendrix, Eric Clapton, Yngwie Malmsteen, and countless others have made the Fender Stratocaster their primary instrument.

It's the "most obvious" lead electric guitar choice for good reason.

The pickup design, bridge setup, neck design, and even the body shape were all set up to play fast.

IDEAL FOR: Speedsters, melodic playing styles, and lots of soloing

Curation of reviews from Sweetwater, Amazon, and American Musical Supply.

Can the Les Paul handle lead?

Yes, it's a dual humbucker setup, but that doesn't take away the fact it has been trusted - at a degree similar to the Stratocaster - by plenty of professional speedsters and lead guitar players over the years.

Between the two guitars (the Les Paul and the Strat) the Les Paul is the more versatile option, able to pull its weight in both the rhythm and lead sections.

But the Mahogany and heavier body design give it that searing, signature Les Paul "wail" on the higher register.

As for the Epiphone designation, it's a great economy option, if you don't want to go the full nine yards and get the Gibson Les Paul Studio (more on that one later).

Curation of reviews from Sweetwater, Musicians Friend, and AMS.

Of 58 total reviews, 0 were negative and 58 were positive.

The Studio is one of the most affordable of the Gibson Les Paul lines, getting you out of the Epiphone economy tier and into the real deal Gibson brand. Lead guitar players from all styles and playing types have used Les Pauls, including Joe Bonamassa, Slash, Joe Perry of Aerosmith, and Zakk Wyle - just to name a few.

It's neck design is quick and easy to play, while the tone it gives off from a heavier body cut is brisk and searing, pairing well with Marshall amplifiers.

Though the Les Paul - particularly the Gibson models - can also hang pretty easily in the rhythm department, capable of some heavier, percussive tones and sounds. Perhaps lead guitarists who want some versatility and the ability to play heavier, would do well with the Les Paul Studio.

IDEAL FOR: Professional recording, session musicians, bridging between lead/rhythm, and just about everything else

Of 74 total reviews, 2 were negative and 72 were positive.

The Telecasters are great for lead guitar because of their trademark "twang" or what some players describe as a "quack" that comes from the right hand picking movement. Contact with the pick or fingers is more pronounced, providing a deeper scrape and more intense strumming sounds.

This creates a desirable tone, especially on the higher end notes which has become especially popular in country music circles.

For lead players that are more into blues, country, or softer styles where more clean tones are used, the Player Telecaster is a great option.

It's also liked more for clean tone styles in general.

The recommended Telecaster is from the Player series - which is Fender's midrange guitar line. However, you can go higher and get more expensive/nicer Telecaster models.

IDEAL FOR: Country, blues, and those who use softer gain levels.

It's hard to identify an electric guitar specifically for lead players.

We're more likely to make generalizations and broader recommendations based on what tends to work well for other lead guitarists. However, it should all be taken with a grain of salt.

Here are some of those broad recommendations about what to look for in a good lead guitar:

Lead players tend to prefer single coil pickups, like the Stratocaster or Telecaster arrangement. Dual humbuckers are typically heavier and warmer, though they're not excluded from lead guitar work at all (Les Paul and PRS examples).

Lead guitar highlights the tone and capability of the electric guitar, which means having more ways to tweak your tone is better for the style you play. For example, a five-way selector switch and/or coil-splitting (if you have humbuckers) is a great feature to have when you play lead.

Stick with Fender, Gibson, and Epiphone

For lead guitarists who are electric guitar shopping, limiting your brand search to Fender, Gibson, and Epiphone is probably a safe bet. Combined, they make most of the best lead electric guitars in the business.

Features to Look For

Now that we've covered some broader aspects to keep an eye on, what about some of the specific features? There will be some redundancy here, but it'll help you narrow down a little bit more in terms of what should matter to you as a lead guitarist.

In most cases, lead guitar players will prefer a tremolo-style bridge with a whammy bar, or even a Floyd Rose locking tremolo system.

Again, we should mention single coil pickups as a specific feature to look for. They're not a requirement, but when you have them you should pay attention to the brand and type. Some can be pretty cheap, so getting a branded single coil pickup from one of the following companies is a good idea: 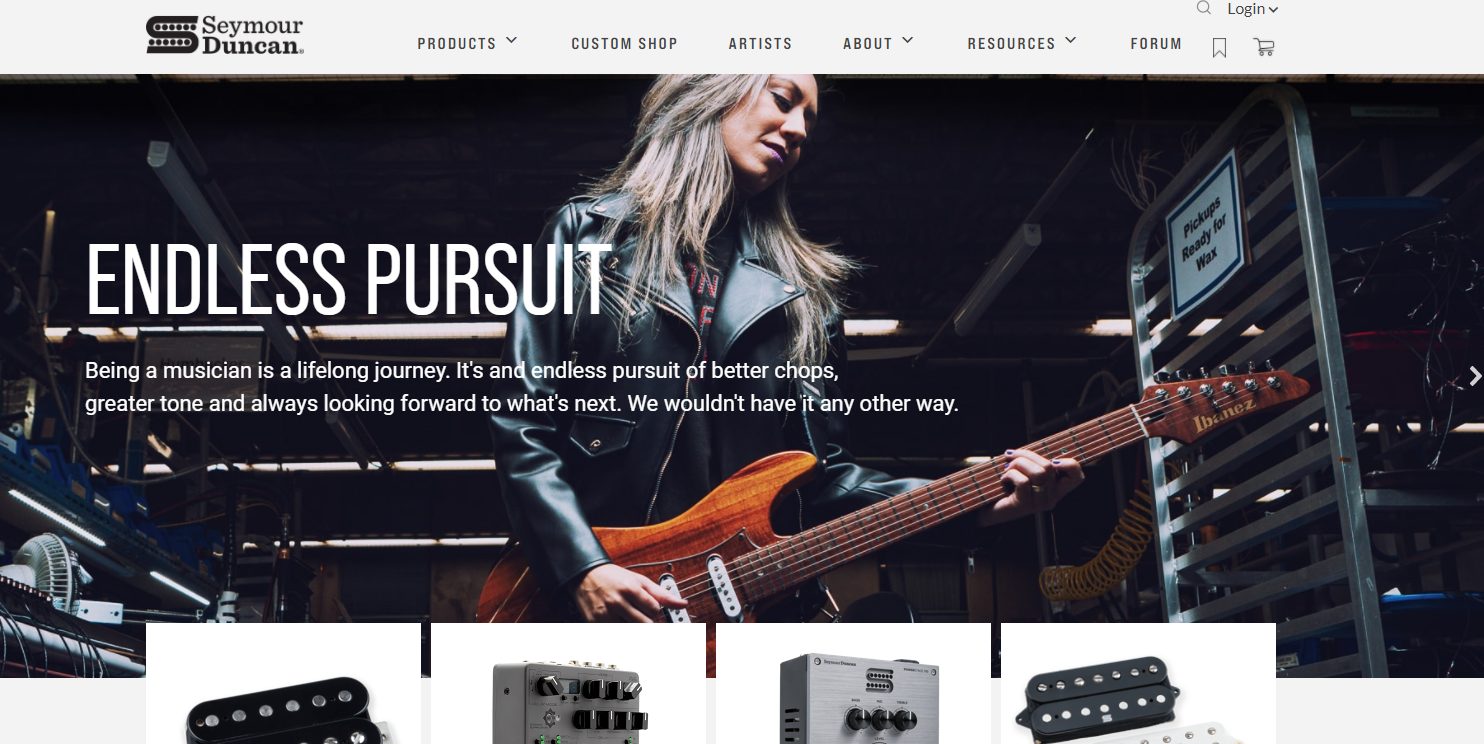 For lead guitarists, the way your guitar's neck feels and plays is extremely important. Look for thinner necks, with a c-shaped profile that will allow you to get fingers further in front of the fretboard. With smaller necks you should have a little more reach and finger length to work with.

Since we partner with Sweetwater, we recommend buying from them. However, here are some additional places we recommend for buying guitar gear in general. 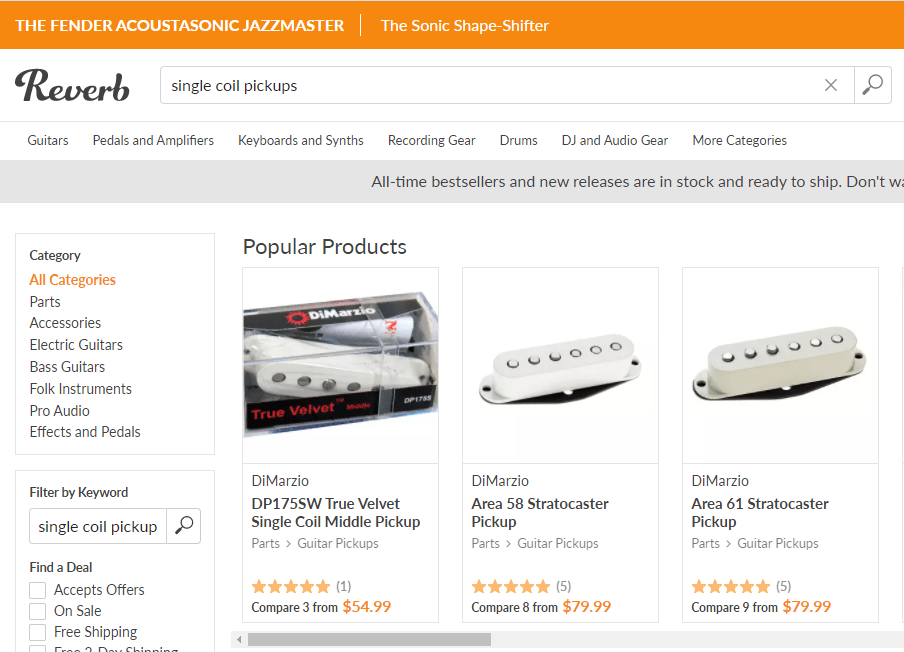 Should I use lighter strings?

Lead guitar involves a lot of melodic picking, single note lines, and soloing, which is easier to do with a thinner gauge string. Aim for .46 or even lower for the low E string. I've seen as low at .42, though going too much lower will cause your chords and rhythm work to sound thin.

There's a balance to be struck here, but if you're a true lead guitar player, the balance of string thickness should definitely be on the higher and thinner end.

What tone qualities do I look for in a lead electric guitar?

The easiest way to describe lead guitar tone is to list some qualities that you should hear when you get a good lead guitar. Here are a few to keep in mind:

All of these are tone qualities that we like to see in lead electric guitars, where some are stronger in certain guitar than they are in others. For example, we like the Stratocaster for bluesy tone while the Telecaster is better for that right hand emphasis.

We also like the Les Paul for higher gain tones and high midrange.

It's not that other guitars can't do the same job, but some are just known for certain qualities and features, which is helpful for you to be aware of as you shop.

Do you have questions about the lead electric guitars we've recommended here?

Remember, we're making suggestions based on personal experience, intended to give you a direction to go in. That doesn't mean we're going to be able to pin point exactly what you need.

Take what we've talked about here, the suggestions we've made, and put them into your context to find the lead electric guitar that's right for you.

We'll be here if you need help or have any additional questions.

Good luck out there.

Best Guitars for Metal: 5 That aren’t Cheap or Gimmicky

Best Guitars for Metal: 5 That aren’t Cheap or Gimmicky