The internet continues to change the way we shop and function in our daily lives. Buying guitars - and music gear in general - is not exempt from those changes. Guitar Center, which is one of the last large-scale music gear retailers with physical locations (brick and mortar) declared bankruptcy in 2021.

As a result, less and less people are buying guitars - acoustic or electric - in physical stores (remember when we used to go into malls?).

So you might ask: Where should I buy a guitar now?

And you probably know about buying a guitar online, but this article will help guide you through some of the retailers we trust, and a few that we don't.

Table of Contents (click to jump)
Where to Buy a Guitar Online (best, maybe, and avoid)
The Best Options
Maybe, but stay frosty.
The No-Go Zone
Conclusion
Related Articles 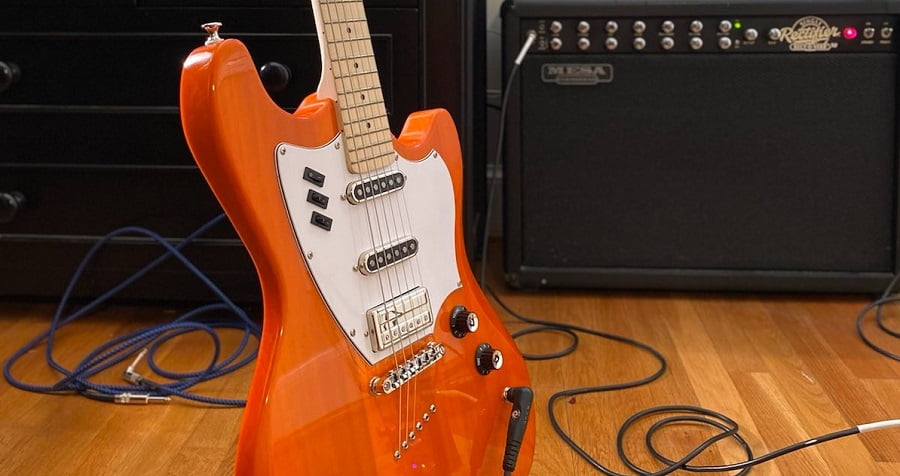 What are some of the best places to buy an electric guitar online?

Where to Buy a Guitar Online (best, maybe, and avoid)

Some of these retailers (not all) are Guitar Chalk partners. That simply means that when you buy through our links, we might earn a commission at no extra cost to you. Please note that this does not impact our objectivity or review policy when making suggestions. We don't recommend or promote anything we wouldn't use ourselves.

Note that all these retailers are entirely online, which has freed them from the expense of keeping physical locations, outside of offices and warehouses. Many of them also have sales engineers to help you with your guitar purchase. Here are our two favorites.

While Sweetwater is particularly well-known for providing a lot of pro audio and live sound gear, they're overall one of the most popular online music retailers with a full sales team, and lots of content-producing partners (Guitar Chalk included). They're also a retailer that works mostly in new gear, and seem to consistently strike a market-neutral price point.

Reverb is your top option when it comes to used electric and acoustic guitars, and pretty much any kind of musical gear you can think of. It uses third party retailers - other musicians, shops, and enthusiasts - to sell gear at some of the lowest discounts available on the market.

We have a Reverb store there as well.

Sticking with the used market, eBay is our second choice behind Reverb. It comes in second because they don't specialize in music gear like Reverb does, but you can still get great deals if you know how to work the auction angle.

There are some retailers that carry a lot of gear and might even have a semblance of a used market. But for a variety of reasons, we just don't totally trust them when it comes to our guitar purchases.

Amazon has a lot of electric and acoustic guitars in stock, from a fairly wide variety of brands. Though some companies keep their guitars off Amazon, notably Rickenbacker and Gibson. Amazon also tends to stock a lot of brands that are really "out there" which gets really noticeable when you're browsing around guitar pedals.

Off-brands that we've never heard of before that are also really cheap seem to litter their search results.

I'll give you one guess where (which country) those come from.

Amazon can be helpful and have some good deals, but we keep them at arms length when it comes to buying something as significant as a guitar.

I mentioned Guitar Center's bankruptcy filing earlier, which is not to say that you should avoid them entirely. For the physical locations that are left, they can be helpful. However, I would still recommend that you use their website, which gives you far more inventory to choose from and more tools to look at pricing and make a more informed decision.

While the culture of Guitar Center has gotten very "corporate" and salesy over the past few years, they're still a solid resource for buying guitars.

What might surprise you is that almost all big box retailers carry a lot of guitars and guitar gear.

It's almost always online, primarily in an effort to compete with Amazon, where the biggest culprits are places like Walmart and Target. No, you're not going to see a Fender Stratocaster at a physical Walmart location, but you very well might find it on their website.

Instead of giving a number and reasoning for each place, we'll just list them in succession.

These are the places where we would recommend not buying a guitar:

Again, I'm not saying that these places can't provide value. It's valid to look at them for price comparison, especially for lower-priced items.

It can work, but I'd look at better retailers first - namely number 1 and number 2 on this list.

The same buying advice applies to acoustic guitars (nylon string in this image) as well as electrics.

Sure, in a store you can't test it out with your hands. But there are so many resources - including demo videos - available to you that makes an informed decision easy, before you even touch the guitar.

We'd recommend sticking with Sweetwater, Reverb, and maybe throw in some Amazon or Guitar Center if you're having trouble finding what you want.

If you have questions about where to buy guitars in an online world, drop them in the comments section below.

Written by Sadie on Acoustics and Info

Danielle graduated from James Madison University with a degree in public health education after spending two years doing competitive show choir in high school. She and Bobby got married in 2011. These days, when not wrangling their four kids, Danielle does product/market research and page formatting for Guitar Chalk.

Danielle graduated from James Madison University with a degree in public health education after spending two years doing competitive show choir in high school. She and Bobby got married in 2011. These days, when not wrangling their four kids, Danielle does product/market research and page formatting for Guitar Chalk.