QUICK HIT: A lesson on how to quickly change from G to C on the guitar's fretboard.

In this guitar lesson I'm going to focus on a single chord change: Going from G to C or C to G. The idea is to learn how to make this change quicker and smoother without missing notes or hitting the wrong strings.

In order to make this work, we need to establish two different ways of playing the G and C chord that deviate from the formal versions we might already know. If you want to explore more content like this, check out our full rundown of how to play guitar, with proper topical ordering.

For example, a formal G and C chord look like this: 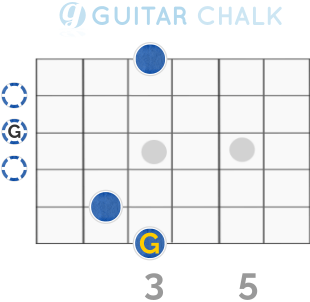 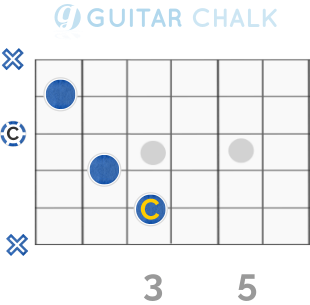 Changing between these two voicings of G and C is problematic for a few reasons, but primarily because of how it requires your fingers to move. With the G chord, your fingers are positioned so that the middle finger is leading, fretting the lowest (root) note in the chord.

To get to the C chord from that position, you've got to move to a position where you ring finger is now leading, with your other two fingers curled underneath. In other words, all four fingers have to come up off the fretboard and then get back on before you can actually start strumming your second chord.

These are two completely different positions for the muscles in your hand to figure out.

While you should learn how to manage the formal versions of G and C, I would argue that they shouldn't be your go-to. To correct the difficult and unnatural movement between the two chords, we need to re-write them so that the same finger can lead both chords and to minimize the movement between them. Here are the G and C chord voicings I'd recommend using: 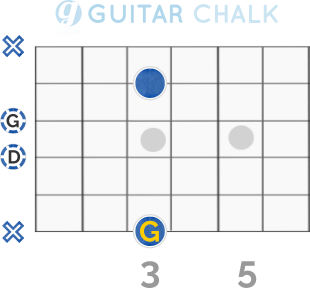 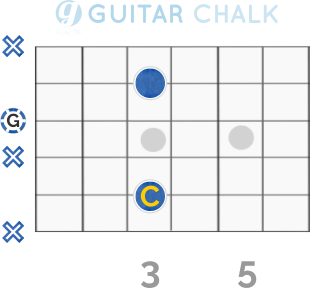 The beauty of these two chords is their open sound and the easy transition they create. We've stripped down some of the guitar intervals leaving you with basically an open G5 and open C5 chord voicing. It's easier to transition between the chords because you're only moving the root note. To do this you only need to move one finger. For example, assume the following number system for your fingers:

Then, play the two chords like this (note the yellow numbers now on each chord): 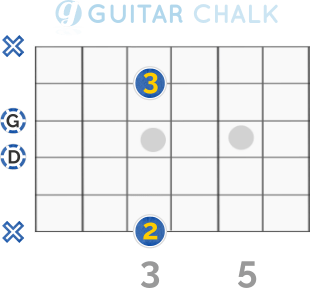 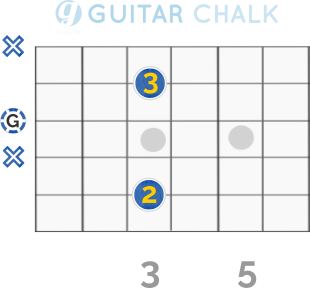 As you can see, the movement is very simple and easy to execute. You play the low root with your middle finger while your ring finger anchors the note at the third fret on the second string, and open notes take care of the rest. From there, simply move your middle finger from the sixth to the fifth string on the same fret to execute a speedy chord change.

You can hear there's some slight differences in these chord voicings, which means there might be occasion where you'd prefer the sound of the original, full open form of the chord. That's more likely to be true of the C5 since the open G5 does not sound dramatically different from the full (original) open G.

Overall, I think it's a more complimentary and subtle voicing of the two chords, which you can hear in the audio. For those interested, here's a tab of the chord change working through four bars:

Practicing the Change with Arpeggios

To start practicing the change - perhaps if you're a beginner - you could pick through a simple two-note arpeggio for each chord that allows you to make the change. Try starting with this tab:

Once you're comfortable with this pattern, add a third interval to each chord:

Even if you're a beginner, I wouldn't expect you'll need to practice this chord change a lot. It's just very easy and more accommodating of how we naturally move our hands and fingers. Just make sure that - as you play the chords and work through the arpeggios - all your notes are coming out clear without unwanted muting or scraping.

Extending the Change to Other Chords

As you might have already noticed, it's equally simple to extend this movement to incorporate other chord changes. For example, you could move your pointer finger down to an interval on the second fret to form a D chord: 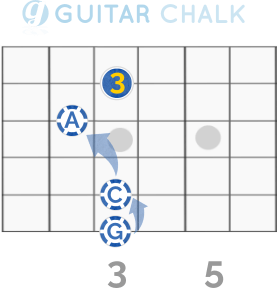 We can easily jump from note to note to change chords.

All we're doing is moving our middle finger (or using our pointer finger) to change the root and/or interval of the chord. We can use this process to easily reach forms of the B, A and Em chords as well.

For guitar players, it can often be beneficial to disregard the "tradition" of chord shapes. Because in their educational form they're often not as helpful as they might be if and when you were able to pair them down to a more basic voicing. Especially in the case of changing from G to C, it's much easier to have them in the open 5 forms where they can be traversed by displacing one finger instead of all four.

When it comes to changing chords, the less finger displacement, the better. The less you can move, the easier and smoother those changes will be.

Do you have questions about this lesson, the G to C chord change or perhaps something I failed to mention here? If so, leave them in the comments section below and I'll do my best to help out.