Checked product links for accuracy and availability. No products were added or removed and all links are up to date.

There are a handful of cheap metal amps that can do a great job with the metal tone and save you from the ungodly price tags of more expensive amplifiers like the Mesa Boogie Triple rectifier and Marshall JCM800.

If you can afford those amps, they're the top dogs.

For most of us, we're looking for more of a happy medium, somewhere between the absolute best quality guitar amp and the lowest price tag.

What makes an amp metal?

While we're painting in broad strokes, it's fair to say getting cheap metal amps generally means you're looking for the following features:

We want to avoid the super cheap practice amps and models with a more vintage sound, since those amps are simply not equipped to handle the thickness and heavy tone of modern metal.

While most amps are versatile, and can handle a wide range of musical styles, we should target amps that are specifically built for metal.

Why are we avoiding tube amps?

When you're dealing with cheap tube amps, you're getting full and warm tones, but it's also a more vintage sound. For example, blues, jazz and light rock guitarists will lean towards smaller tube amps because they're great for those styles.

You've got to get into the higher price ranges before tube amps are good with metal.

Again these are broad strokes we're painting in, though generally true. The Mesa Boogie Triple Rectifiers and Marshall JCM800s of the world are both fantastic metal amps and tube-powered, but they're also really expensive.

If you're going cheap, the solid state amplifiers of our day are generally better-voiced for modern tones and metal riffing.

How are we defining "cheap?"

We'd consider any amp under $300 to be cheap or on the "low end" of the pricing pool.

While it's not necessary to spend thousands of dollars to get a good metal amp, spending next to nothing isn't enough. Both of the amplifiers recommended in this list retail around $200, which is ballpark for cheap metal amps. 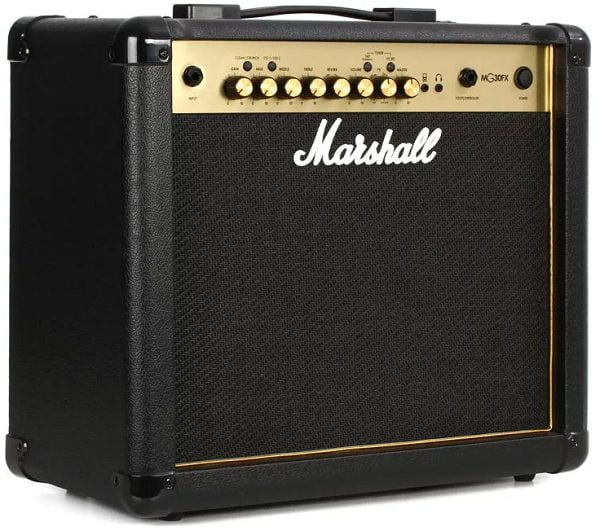 If you want something louder, a 50 watt version﻿﻿ is also available.

The MG series is Marshall's economy amp line and uses solid state technology, unlike many of their more expensive models.

However, their tone profile is fantastic for metal and modern rock fans because it's distinctly low and bass-friendly, which gives you a lot of bottom in your EQ, even on clean settings.

Within the MG30CFX, you have three different channels or "modes" to choose from:

Overdrive II is the heaviest of the three settings, though even the clean channel feels thick and heavy as well.

Whether you use the onboard distortion or pair the clean channel with a heavy distortion pedal, you won't have to dig much to get a distinct metal tone out of this amp.

At $199 it's one of our favorite cheap metal amps to recommend.

Other features of the Marshall MG30CFX

Onboard digital effects are also included, giving you basic modulation and delay.

Marshall throws in a tap tempo button (for effects timing) and an onboard tuner as well. There are four different storable channels which can be controlled by a footswitch that is, unfortunately, sold separately.

The amp has decent volume at 30 watts which is enough for small gigs, bedroom jamming and even small studio recording sessions. 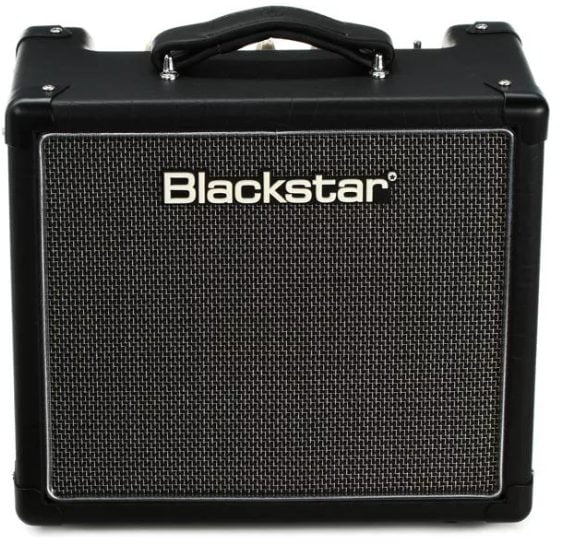 Blackstar amps put a heavy emphasis on distortion and the HT1R is no exception, giving you the following processor options:

Here's a closer look at everything on the control panel:

A closeup look at the controls of the Blackstar HT1.

The strength of this amplifier is its dirtier overdrive selection mode, which sounds really thick and modern. In fact, calling it "overdrive" is a bit misleading, because it's a much heavier distortion that competes with amps far larger.

For fans of distortion and heavy, modern rock tones, the HT1 is one of the best budget metal amps on the market.

The lack of control limits its usefulness, but for pure gain and distortion, it's tough to beat.

At only one watt it's certainly not the loudest amp on this list, but it does mic well, and comes with an emulated output. I think it sounds a lot louder than it is, certainly enough for indoor practice sessions or even small gigging venues.

The tube power, at both the preamp and power amp levels, help to give it a lot more power and intensity behind the sound, even if it's not tremendously loud.

Blackstar's HT1 is one of my favorite amps in this price range.

IDEAL FOR: Metal and modern rock fans of all persuasions

There are other amps that fit the bill we've established and are worth consideration if the aforementioned options don't work for you.

These amps all fall under the $300 cap limit we set earlier. 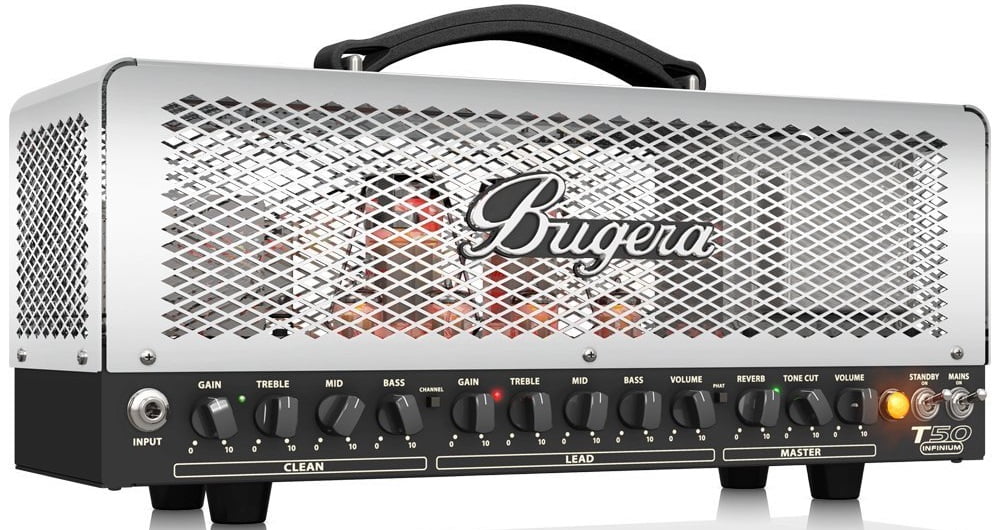 The Bugera T50 is one of the few tube amps we like for metal in the sub-$300 price range.

The Bugera T50 is an amp head, which means you'll need to pair it with a speaker cab. It's also a tube amp, and one of the few cheap tube amps we like for metal tones.

You get four 12AX7s and two EL34s that can handle anything from the light vintage tones to heavy, modern distortion.

If you don't mind adding the cab, the T50 is a great metal amp

Tube amps are generally better than solid state amps in terms of pure tone quality. However, that does not mean all tube amps are automatically better for metal. For example, the Fender tube combos are great amplifiers, but they're not good fits for modern metal or high-gain settings.

In other words, tubes can sound really good, but you need the style and voicing of the amp to fit the style of music you want to play.

In this case, metal and/or modern rock.

This means brand plays a big role in the process.

What amp brands are best for metal?

Here are some of the brands that produce tube-driven amps that have a good onboard distortion and are made for metal or modern rock styles:

What about pairing a different amp with a distortion pedal?

The tube amp factor is why professional guitarists often rely on amp-based distortion and not a distortion pedal. Distortion produced by a tube circuit generally sounds better than what you can get out of a distortion pedal. That's why fans of metal should give careful consideration to an amp's onboard "dirty" channels before buying.

If you want to go with a cleaner and more vintage amp, you can always pair it with a heavier distortion pedal.

If you can get an amp that produces a somewhat thick or at least well-balanced clean tone, you can add a heavy distortion pedal and still get a great metal sound.

Our recommendation is to use the amp as your base, but it's not always necessary to do it that way.

That's also based on the somewhat unfair assumption that metal is contingent upon brand. To an extent, that's true, since brands like Line 6 and Blackstar are traditionally considered more "modern" and metal is a modernized style of guitar.

But, it's not to say that you can't piece a metal rig together using a Fender or Vox amp.

If you're creative enough, there are plenty of ways to make it work.

Your Thoughts and Feedback

Do you own or have you used either of these amps?

Maybe you have some insider info to share on it?

Let us know in the comments section below and if it's noteworthy, we'll add it to the piece and cite you as a source.