What is the difference between reverb and delay?

Reverb in ‘guitar’ terms is generally used to fill out the sound of your guitar. It can be molded into any sound to enhance your instrument or vocal. Without it, you can sound very muddy, ordinary, and dry.

Delay is a time-based effect that recreates a sound. It repeats itself a certain number of times after the initial signal has been sent. The length and speed of the after effect are usually set by the user.

My name is Lee and I'm a singer and guitarist of 25 years. Music would be in a pretty sorry state without Reverb and Delay.

You can dig very deep into this subject as it's literally a science. But for us everyday musicians we just want the quick answers in plain English. We're going to look at some simple explanations of how reverb and delay are different from one another, giving you a better understanding of the two.

Table of Contents (click to jump)
What Is Reverb?
Parameters of Reverb
6 Types of Reverb You Need To Know
What Is Delay?
Parameters Of Delay
7 Common Types Of Delay
Bottom Line

Reverb recreates the sound of an empty room. It enables you to create depth and space, like if you were in a Small Studio or a Church. The larger the room, the greater the length of decay or reverberation.

Reverberation is a process where the sound created bounces off surfaces until it finally decays.

The length of reflection is programmed by the user. So when you shout in a large hall, the sound you'll hear is Reverberation.

Reverb is also essential to creating a wetter or warmer tone.

This gives the sound texture and an ambient layer, rather than a dry sticky tone.

There are many ways to tweak reverb, but I've narrowed this list down to the most common parameters.

Think of size as ‘room size’. Depending on what effect you’d like to achieve with your reverb.

You can choose from a small room where the reflections will decay quickly, to an amphitheater where your sound will last longer and echo over and over. 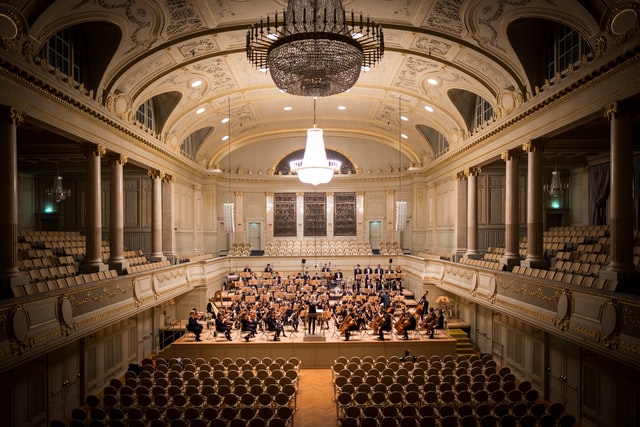 The size and shape of a room will impact the type and sound of your reverb trail.

Decay can be thought of as ‘time’ or' Reverb time’. This period is the length of time it takes for the reverb to repeat and decay (end).

Is the time between the original dry source sound to the first reverb reflection.

The volume in which you receive your initial reflection. This gives you an idea of the space you're in. Walking across a stage would give you a pretty ‘early reflection’ as the sound is under your feet. The louder the reflections, the smaller the room.

This parameter controls the echo density. Think of diffusion as shape.

Increasing the diffusion control makes the shape thicker and thus leaving less space. Depending on what sound you require, clearer or thicker, diffusion is a handy tool to have at your disposal.

6 Types of Reverb You Need To Know

Let’s look at the most common types of reverb used today:

The Chamber room effect sounds like something from a horror movie.

If you're looking for ample reverberant sounds on very reflective surfaces (and you don't own a giant hall) then Chamber Reverb is your go-to sound. A lively, distinct type of reverb, the sound bounces off many surfaces that are close together.

A Room sound is one of natural color and a real intimate feel. Almost like the person is playing guitar right in front of you. This would suit the solo acoustic performer looking for a ‘real life’ live kind of feel.

Stage Reverb does exactly what it says. It's a reverb that offers the listener a ‘live’ energetic on-stage feel. It does a great job of bonding individual instruments together like a band scenario. For a fiery, lively mix choose stage or live reverb.

This type of reverb suits rock and pop music.

This is my favorite reverberation effect. The Church Reverb has energy due to the sound reflecting off stone walls and vast ceiling space. The large, full echoing sound makes this a unique reverb choice.

Church reverb adds a dramatic side to your music.

Gated reverb is unique in that you can limit the amount of reverberations and stop them at a certain point, unlike the other options that naturally decay.

It is mostly used on drums, particularly snare drums in the 80s. Phil Collins was a big fan of gated reverb but this sound has since become a bit dated.

The Gated process is also extremely useful for suppressing background noise, such as hum and feedback (on guitar).

In simple terms, delay is a signal that duplicates at certain periods depending on the initial sound. It then decays with every repetition.

If you were to pick through a guitar chord once, the sound would then playback to you at a specified time. The volume of that chord would gradually get quieter until it disappeared entirely.

In essence, the original dry sound is stored and played back over and over into the output creating a loop. Some loops decay and some are filtered before being sent to the output. This filtering process can create different tones and sounds.

Unlike Reverb, you have to be semi-skilled in laying down a decent delay track. If you’re not too sure what you're doing with delay, you can end up with a mess of looping guitar parts that are way out of time. Your drummer will hate you!

Let's look at the main Parameters of Delay and explain them in a simplified manner:

This is the time it takes the first signal to repeat.

If you have a delay guitar pedal with a tap tempo, you can dial in or tap the time signature you require to play along with a song. Although this is not 100% reliable when playing live, as you’ll never really be in ‘perfect time’.

When utilizing delay in a studio environment, the engineer can program the delay to match the bpm of the drums.

This feature option is very useful when using Delay. It synchronizes you in time with the beat of the music you're playing along with.

When utilizing the Low or High cut EQ, you're adding a filter and allowing either lower frequencies or higher frequencies through.

You may want some lower EQ from your microphone, or some higher frequency on a certain instrument in your mix.

Feedback delay is when the original signal has been sent out and feeds back into the original source creating echoes. The more feedback you allow to return to the source, the greater the amount of repetition.

As with Reverb, there are a variety of delay types to choose from. These are the most common:

The closest sound you’ll get to a natural echo. Fast and punchy, creating a much larger sound than the source is actually creating. It's popular with vocals.

Doubling Delay is unique because it sends the signal back very quickly, which gives the listener a doubled sound. It's the same as stacking two identical takes on top of each other. This gives the instrument or vocal a thicker sound.

Loop back does the same as an ordinary delay, but will repeat your signal without decaying. If you don't stop it, it will continue forever.

The ping pong delay jumps from left to right giving the listener a stereo effect. It's used pretty successfully by Pink Floyd on ‘Dark Side Of The Moon’.

It's real treat for a listener with headphones.

I hope you’ve learned something useful in our ‘What’s The Difference Between Reverb & Delay?’ article.

As always, the best way to learn is to get someone (who knows what they're doing) to teach you or get your hands on some cheap guitar pedals and dial in some tones yourself.

There is no limit to what you can achieve with reverb and delay so grab a few pedals and try them out for yourself.

If you have questions, feel free to drop them in the comments section below.

14 Delay Pedals with a Built-In Looper

14 Delay Pedals with a Built-In Looper

Through my 25 years of playing experience, I am keen to assist you in any way I can. Over the years I've spent thousands of hours messing around with gear and guitars. I still play guitar almost every day and couldn't be without it. Lee-Authority Guitar