Learning the guitar E string notes will make your life as a guitar player far easier.

It’s foundational knowledge that you need to then learn the rest of the fretboard and and start building a chord vocabulary. Because if you don’t know the guitar fretboard notes, you’ll be at a significant disadvantage when compared to the musicians who do and you’ll have a developmental handicap when moving onto more difficult and dynamic guitar playing.

Yes, it’s boring. But if you don’t learn it now, you’re going to have a harder time learning the more interesting things, moving forward. However, I can show you a few techniques that will shorten the amount of time that you have to spend on it and get you through the memorization process a lot quick.

And the tactic is to simply start with the low A and E string notes.

Start With the Low A and E String Notes

So, why the A and E string notes?

Because those two strings are often going to be where your root note will fall, which is how you’ll tell what chord, scale and key you’re playing in.

That’s not to say they can’t fall on other strings, but a grasp of the fretboard starts with an understanding of the notes on the sixth and fifth strings.

If you’ve learned the sixth and fifth string, you’re halfway there.

Keep in mind that the sixth string and the first string are both tuned to E. Therefore, the notes on those two strings will be the same.

If you’ve learned the sixth and fifth strings, you’re halfway there.

You can then use octaves to identify notes on the fourth and third strings. But we’ll delve into that more later.

For now, let’s focus on the A and E string notes. 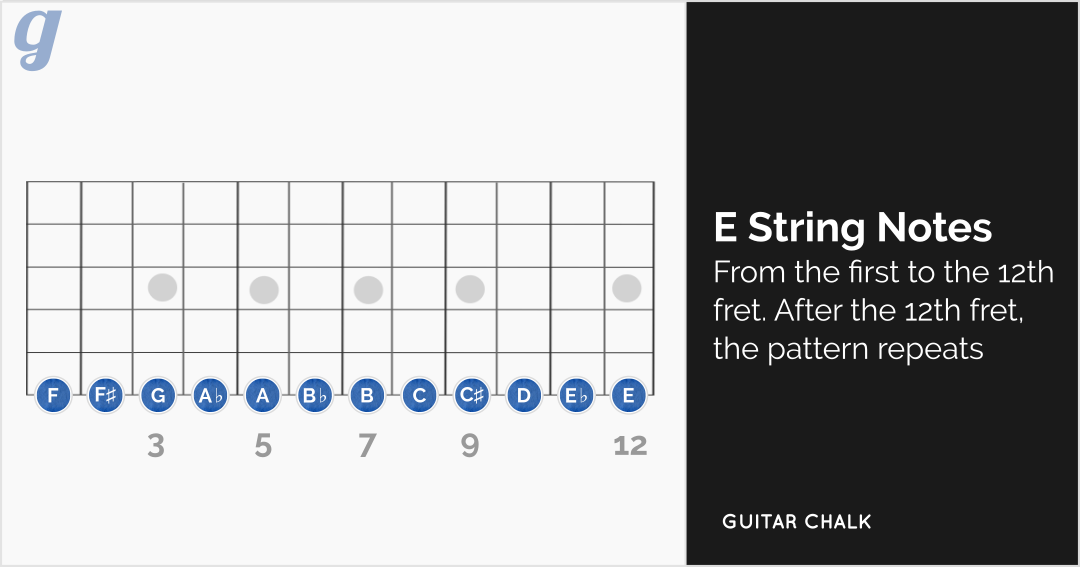 Notes on the E string (the thickest) on the guitar

As far as memorizing this pattern, I started from the F at the bottom and worked my way up to the E at the 12th fret. It can also help to only memorize the letter notes by themselves and then work on the flats and sharps.

At the 12th fret, the notes simply start over again.

These natural notes are the most important to be able to readily recognize, as you can find your sharps and flats based on their location.

Now for the A string notes. 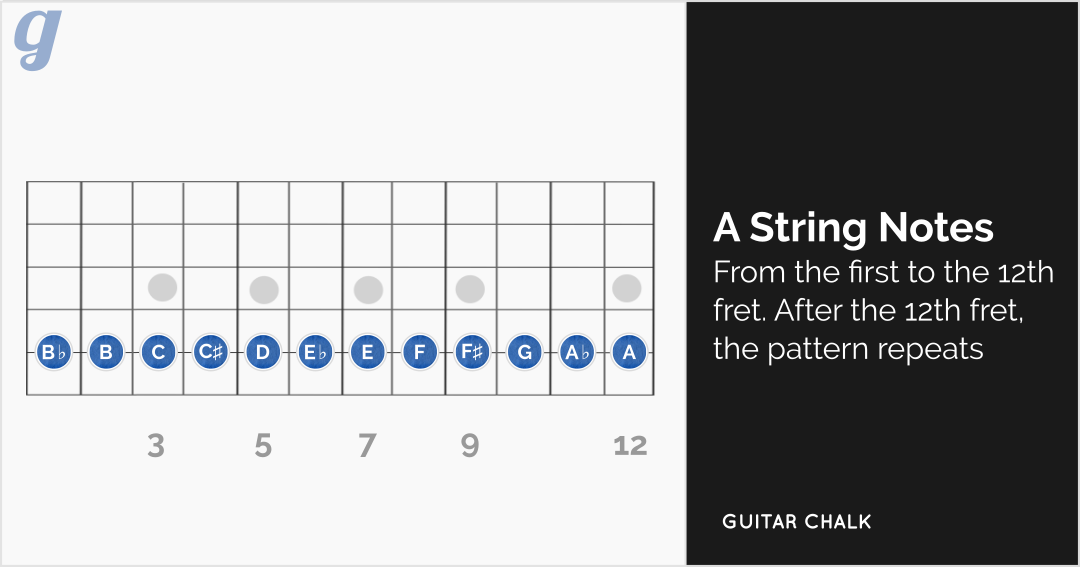 Notes on the A string, all the way to the 12th fret, at which point it simply repeats the same pattern.

In this case, the open note is an A since we’re in standard tuning. You can see that it follows the exact same pattern as before, starting at A instead of E.

Let’s look at some octaves so we can identify the notes on the fourth and third string as well.

Short of just memorizing the notes for the fourth and third strings, you can use octaves to quickly determine those notes provided you’ve already taken the time to memorize the notes on the fifth and sixth strings.

Justine Sandercoe provides a solid explanation in this video:

Here’s a link to the full guitar lesson if you’re interested.

If you skip to the 1:30 point in the video he covers a basic octave shape, which is essentially the following tab:

These two notes are both the same since the interval between them is 12 semitones (frets). That means they are exactly one octave apart. Thus the note on the third fret, a G, corresponds to the note on the fifth fret which is also a G.

As Justin goes on to explain, the same thing is true of the root notes on the fifth string, where the octave equivalent can be found on the third string.

In the above example, each note is a C.

The Rest of the Strings

I’ve created graphics for the fourth, third and second strings, if you prefer to memorize them that way. Just keep in mind that the sequence of notes will be the same, and different strings will only dictate that you’re starting with a different open note. 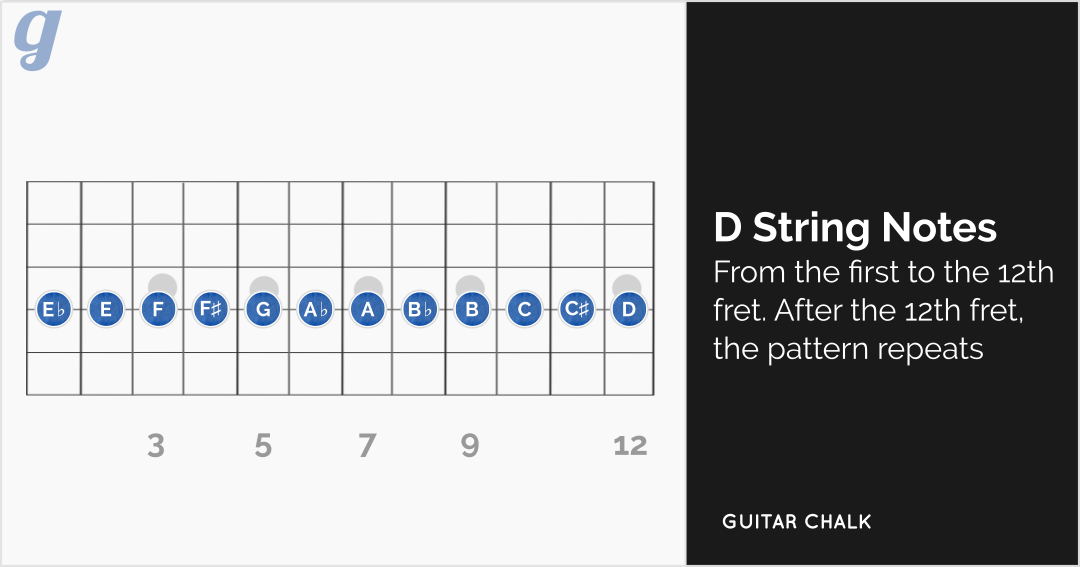 Notes on the D string of a guitar. 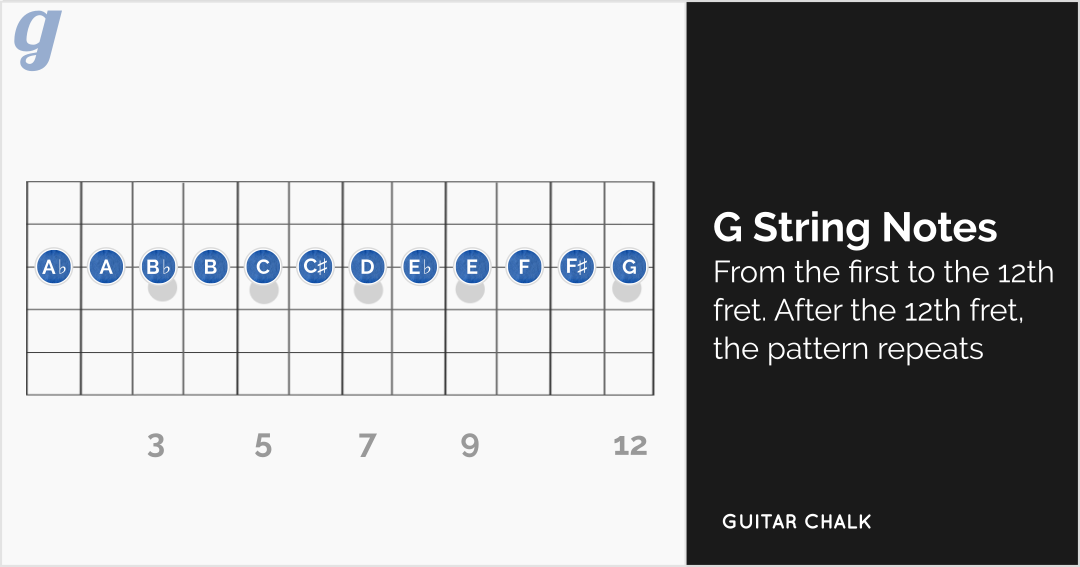 Notes on the G string of an electric guitar. 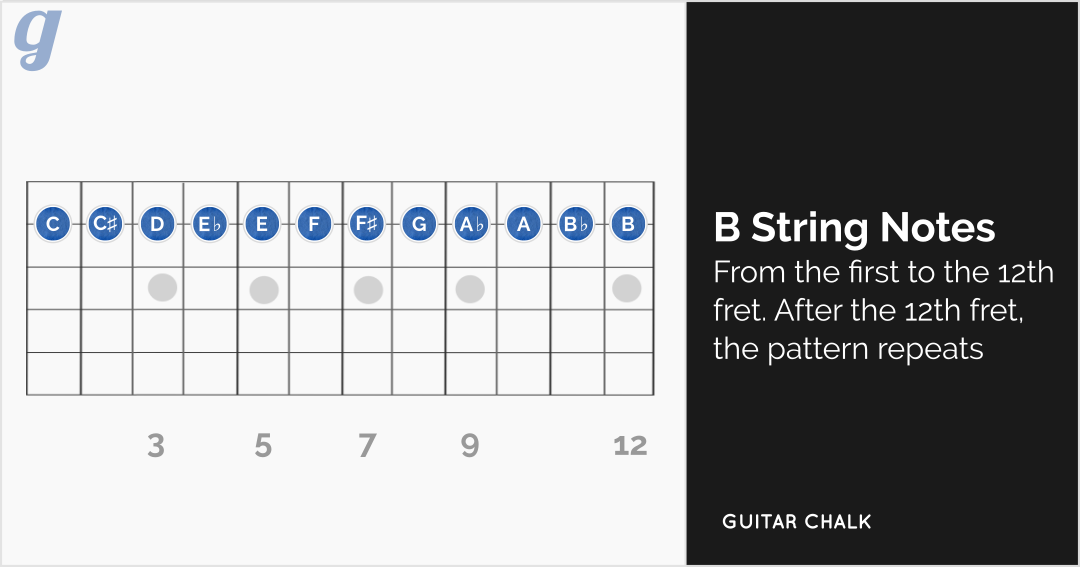 Notes on the B string of a guitar.

Most people combine the octave method with some raw memorization. If you decide to go this route, wait until you’re really comfortable with the A and E string notes before you move on.

Once you’re ready, you can start on the fourth string by counting from the first fret up to the 12th and naming each note as you go. If you get stuck, use the octave method to get yourself going again and go through each string several times.

Remember that the sixth and first strings are both going to be the same since they’re both an open E.

Klaus Crow of Guitarhabits outlines a 16-day method for learning the entire fretboard, while Joe Walker of DeftDigits takes you through it in nine days.

Both articles are worth checking out, as they can each be done in less time if you want to move quicker.

I’d also recommend this fretboard memorization guide by Erik Buljan. In addition to memorization techniques, Buljan outlines a number of different exercises that will help you retain the information.

Do you have ideas, memorization techniques or exercises to share about this topic?

Get in touch with us over at Twitter or the comments section below.

Written by Bobby on Lessons and Notes

Written by Bobby on Lessons and Scales