A fun and unique take on the Delay/Reverb combo with an emphasis on warm, analog-modeled ambient sounds.

For this review we tested, photographed, and recorded The Wave. All of it is a first-hand account of the product. To support our site, you can shop via the orange Amazon button above at no extra cost to you.

The Wave by Foxpedal is a dual delay, modulation, and reverb pedal all-in-one unit. Though with three different delay modes to choose from, the pedal is more delay-focused, while the reverb and modulation seem to take on a background role.

Both reverb and delay have their own bypass switch, allowing you to use one effect at a time or both. 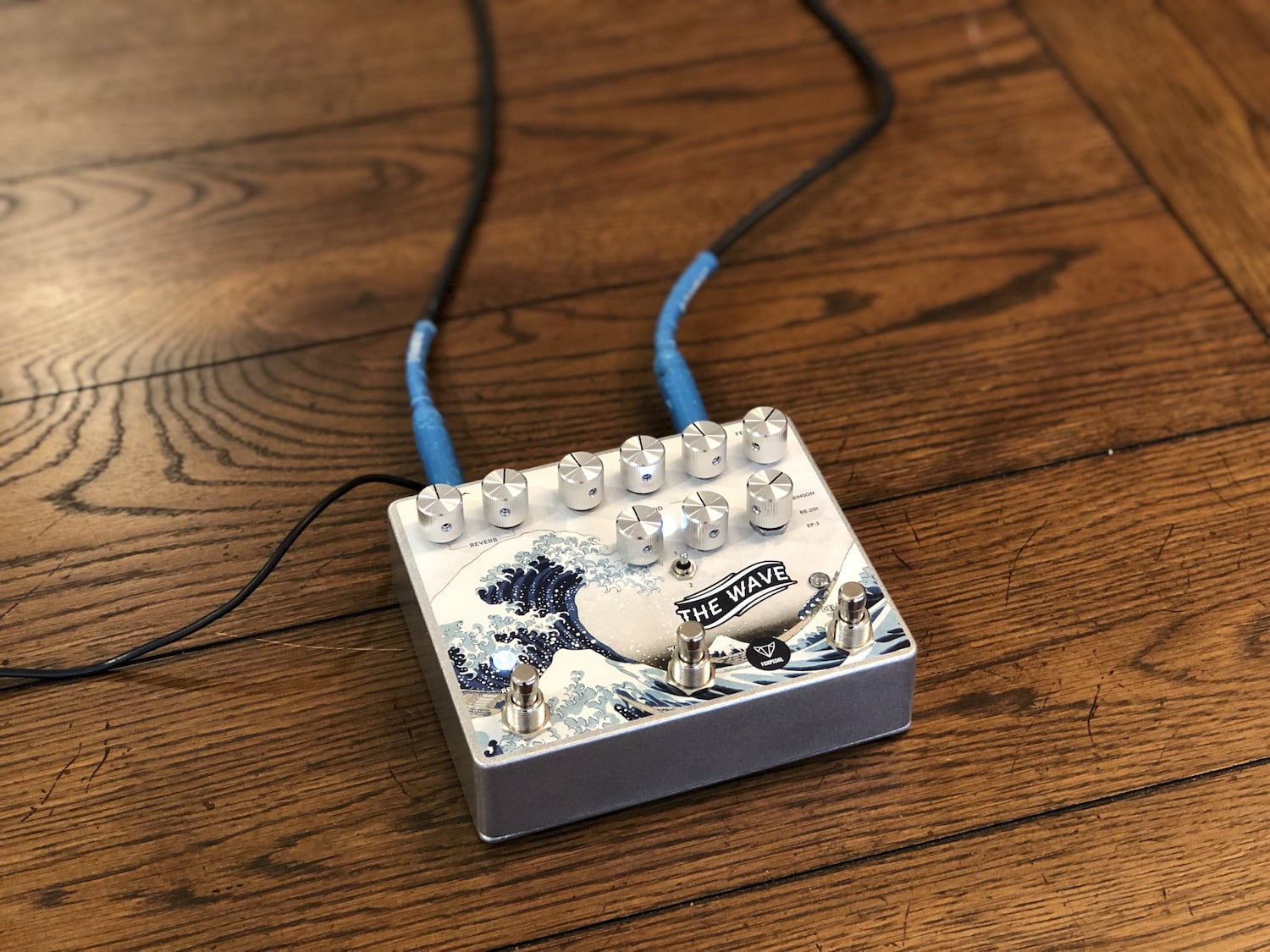 The Wave didn't strike me as a multi-effects pedal as much as a delay with lots of complimentary functionality. Most of its functionality centers around the three delay modes, with far less attention given to the reverb and modulation sides.

Here's my demo of the The Wave:

Table of Contents (click to jump)
Tone and Sound Quality
Best Fit and Context
How do I power The Wave?
Is The Wave true bypass?
Is The Wave a good fit for bass guitar rigs?
Manuals
What are some good alternatives to The Wave?
Is it compatible with an expression pedal?
Other Foxpedal Wave Articles & Resources
Your Questions and Comments

The reverb effect isn't particularly memorable and seems far more subtle and less intense than what the delay knobs were able to produce. When I first turned on the reverb, it didn't seem like I could really hear it without pushing the mix knob up past 60 percent.

Though what I could hear sounded good and the decay control extended the ambient trail quite a bit, which melded really well with the delay once I kicked that on. 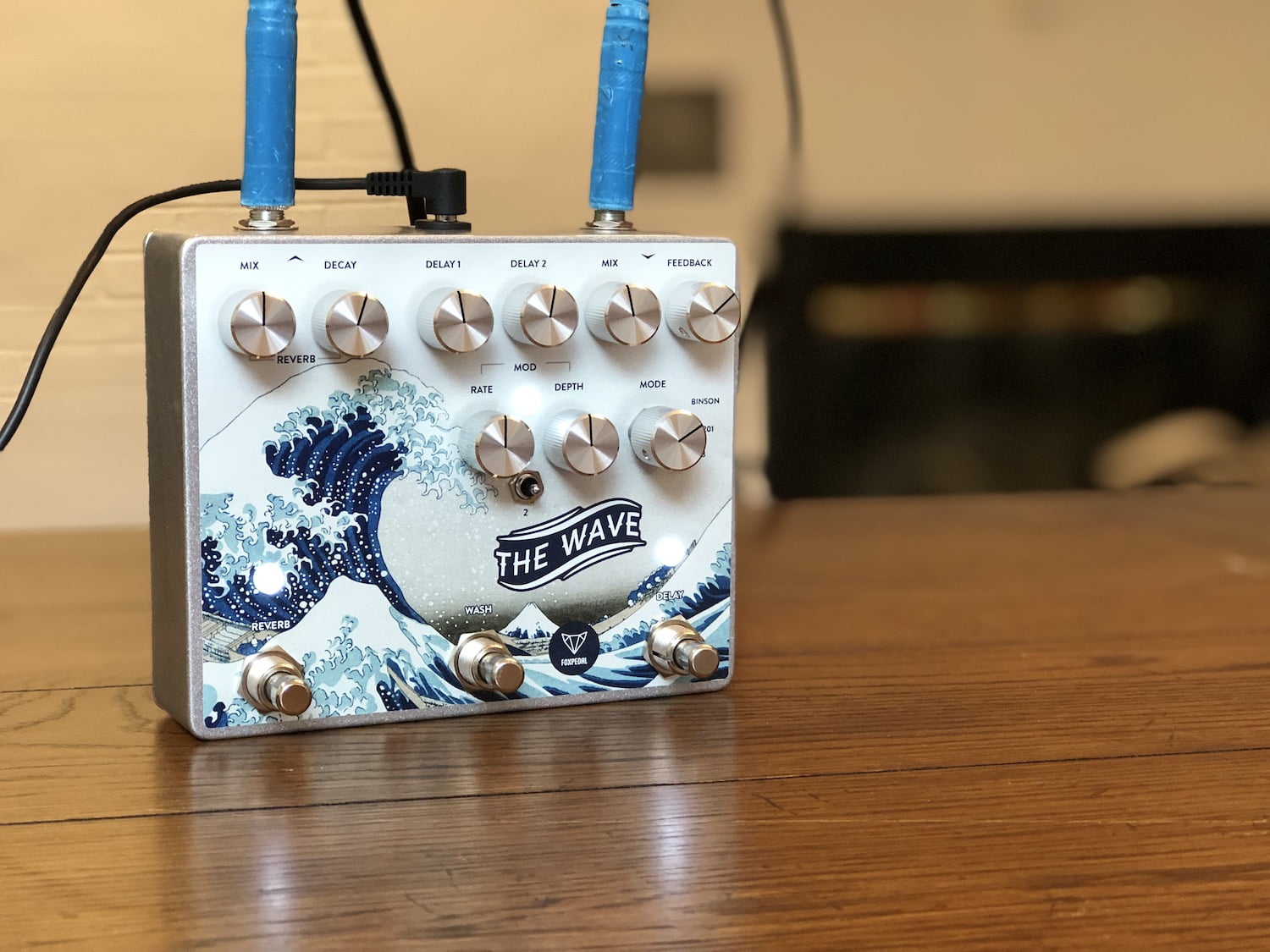 Reverb is easily a less-emphasized aspect of The Wave's functionality.

While I'm not sure exactly how Foxpedal has parsed out the analog and digital responsibilities in this pedal, the delay modes definitely have a distinct warmth to them, which do a good job of capturing the thicker, vintage-style tape delay tones.

My impression of the tone, overall, was that everything at least sounded analog, and I was totally impressed with the quality.

The Wave's retail price is high, hovering around $320 in most markets. This is because of the analog and digital combination, as well as the boutique appeal of a smaller company like Foxpedal.

Though it could be worth the investment for someone who wants an expansive, ethereal delay pedal that can do more than just delay. Of the pedals I've used up to this point (and I've used a lot), it's easily one of my favorite delay options. (though hasn't been included in the linked article, as of yet).

For those who don't mind the expense, it's a fantastic pedal for a wide variety of styles, both in the studio and onstage.

How do I power The Wave?

Though it's a bit of a large pedal, The Wave can be powered using a standard 9V battery or power supply with a 9V outlet. As usual, I used my Voodoo Lab ISO 5 to run my tests on The Wave. 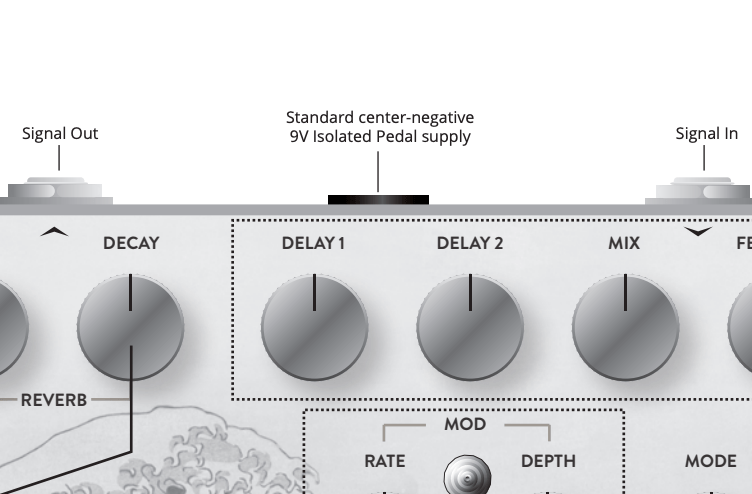 The Wave can run off a 9V power source.

Does it include a power supply?

When unboxing The Wave, it did not include a power supply.

Is The Wave true bypass?

Yes. Both the reverb and delay switches are soft-touch with true bypass. 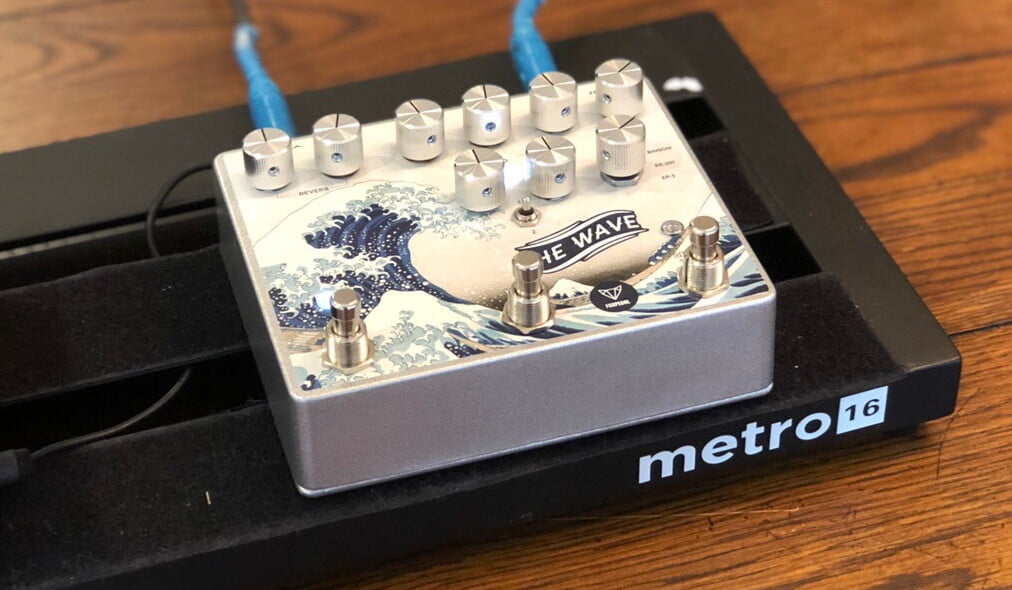 The Wave on my Metro 16 pedalboard

Is The Wave a good fit for bass guitar rigs?

Delay pedals are not typically utilized by bass players, unless you're Justin Chancellor. Even if you're a bassist that's looking for a delay, my impression here is that The Wave would be overkill, given the added modulation and reverb that you probably wouldn't use with bass.

What are some good alternatives to The Wave?

The issue with finding an alternative to The Wave is whether or not the extra functionality is something you want to hang on to. For example, it's pretty simple to find alternative delay pedals, but delay pedals with modulation and/or reverb is a little trickier. A couple I could recommend that would both save you a lot of money would be the following:

Is it compatible with an expression pedal?

The Wave does not support an expression pedal connection.

While any scoring system is somewhat subjective, The Wave's 92.6 percent is one of the higher grades for a delay pedal I've ever gotten out of that system with it's particular weight.

It's strong on tone quality and versatility, despite not providing a ton of control mechanisms.

The Wave is just really good at what it does and, in some cases, worth the price of a high-end admission.