With a number of improvements, Guitar Center makes our list for 2023 with improved web design and customer service. Flagship options like Sweetwater and Reverb still dominate the ranks. Enjoy the list!

These are our official recommendations of where to buy guitars and guitar gear in 2023, addressing online options exclusively. We've put together this list based on several factors we believe are important when it comes to buying guitars, amps, pedals, and even bass guitars.

They include, but are not limited to, the following:

For example, one company I would not recommend would be Amazon. Not only do they not focus on musical instruments, but their company culture isn't one that we'd be willing to endorse.

But again, instead of telling you what we don't like, we'll go through our list of winners, starting with our own full list of the best places to buy guitar gear in 2023.

These are our top overall picks for best places to buy guitars and guitar gear in 2023, focused entirely toward online retail. This particular table includes companies we've mentioned in this article along with Stewmac, which we didn't highlight specifically for a category. 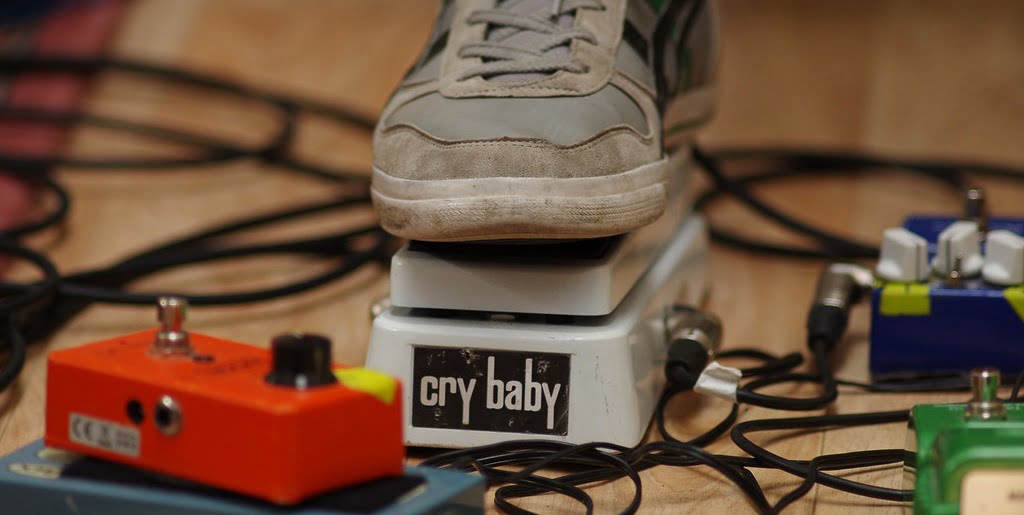 Where are the best places to buy electric guitars online? Flickr Commons image via Spaztacular

With most guitar gear, our primary concern is that the company be focused specifically on musical instruments. We do not recommend companies like Amazon or Target, aside from occasions where Amazon carries brands that some music retailers don't carry.

For electric guitars we want to see either a lot of used options or a high-degree of customer services and expertise for answering questions. 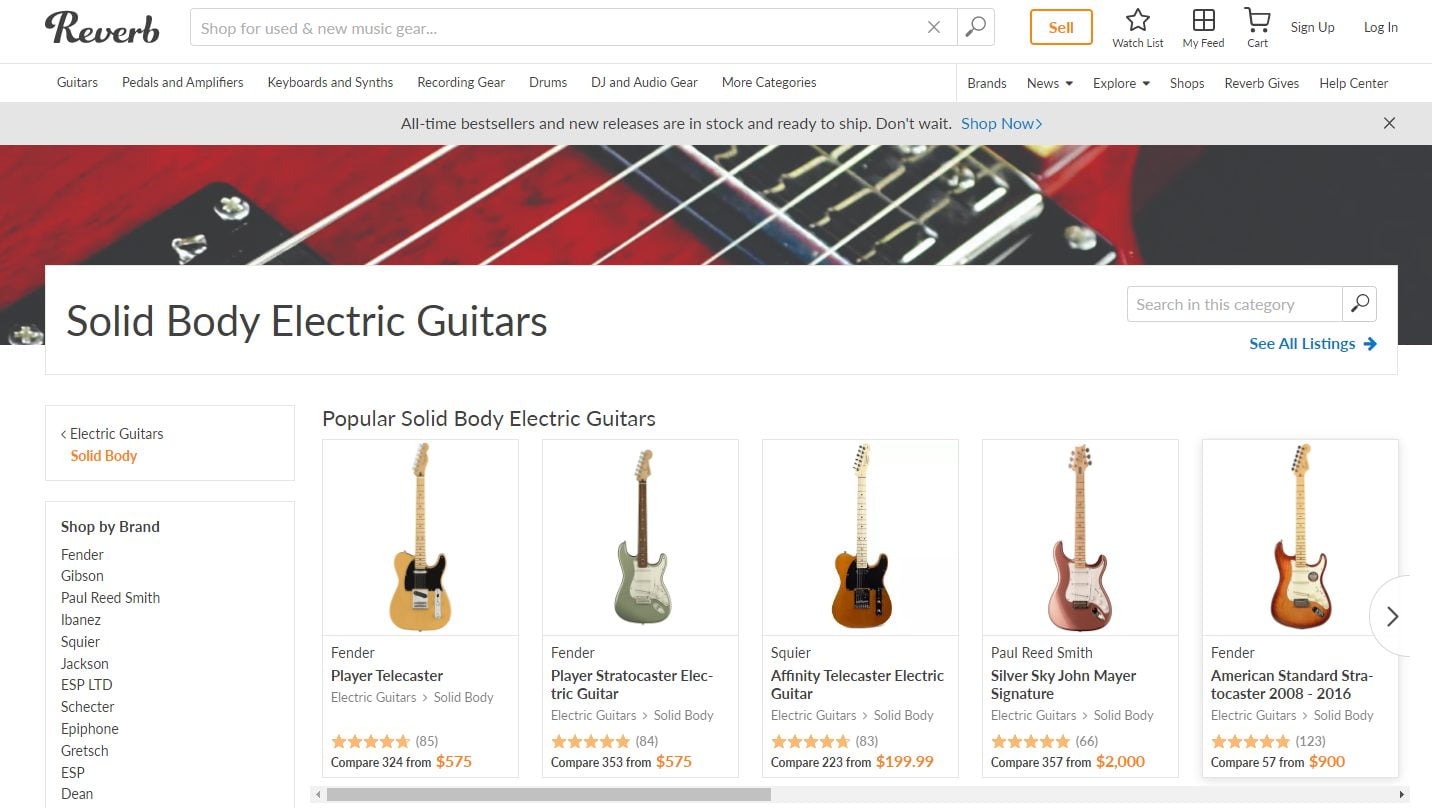 We recommend buying electric guitars from Reverb, particularly if you're buying used. 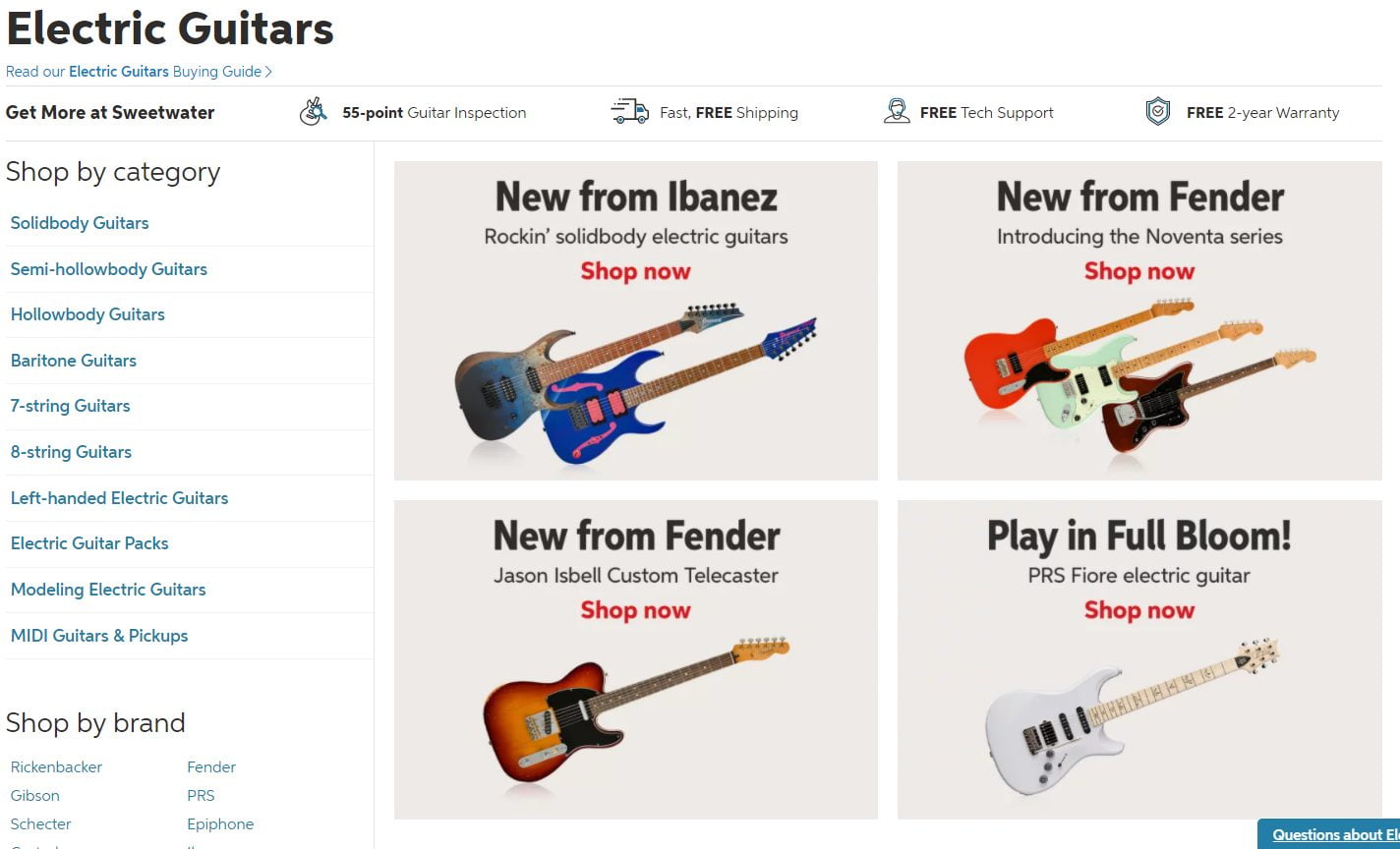 Sweetwater does a fantastic job with their new electric guitar options, as they're especially good about getting up-to-date models of everything they carry.

Sweetwater only establishes relationships with certain brands, and they have a fantastic sales team. While they don't have much in the way of used gear, those that want to buy new are better off on Sweetwater because of their inspection process, warranties, and customer service.

Best places to buy an acoustic guitar in 2023?

We tend to shy away from acoustic guitars in the used market, putting Reverb at a disadvantage. However, that's not to say you can't go that route - it's just a little more likely to have wear and damage that will diminish playing quality.

Again, Sweetwater picks up the top spot here with Musician's Friend getting the runner up slot in the acoustic guitar category. 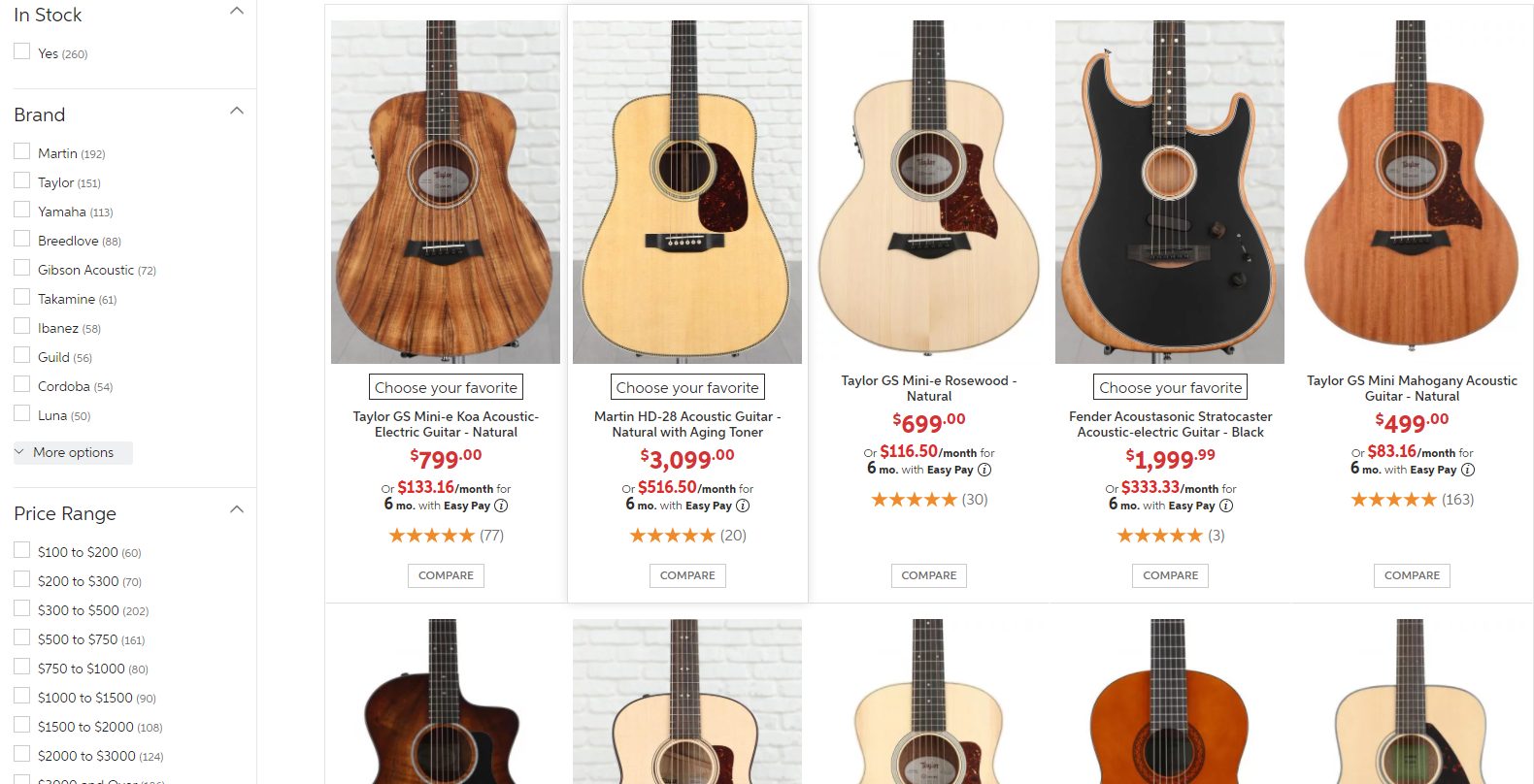 There are a ton of acoustic guitars on Sweetwater .

We have Sweetwater as our top pick for acoustic guitars because they have a ton of them, and once again the expertise/inspection process is important to us here. There's also a wide range of quality levels and plenty for every skill level and budget. Sweetwater does a great all around job with displaying their inventory and serving their customers - both current and potential - in the acoustic guitar space. 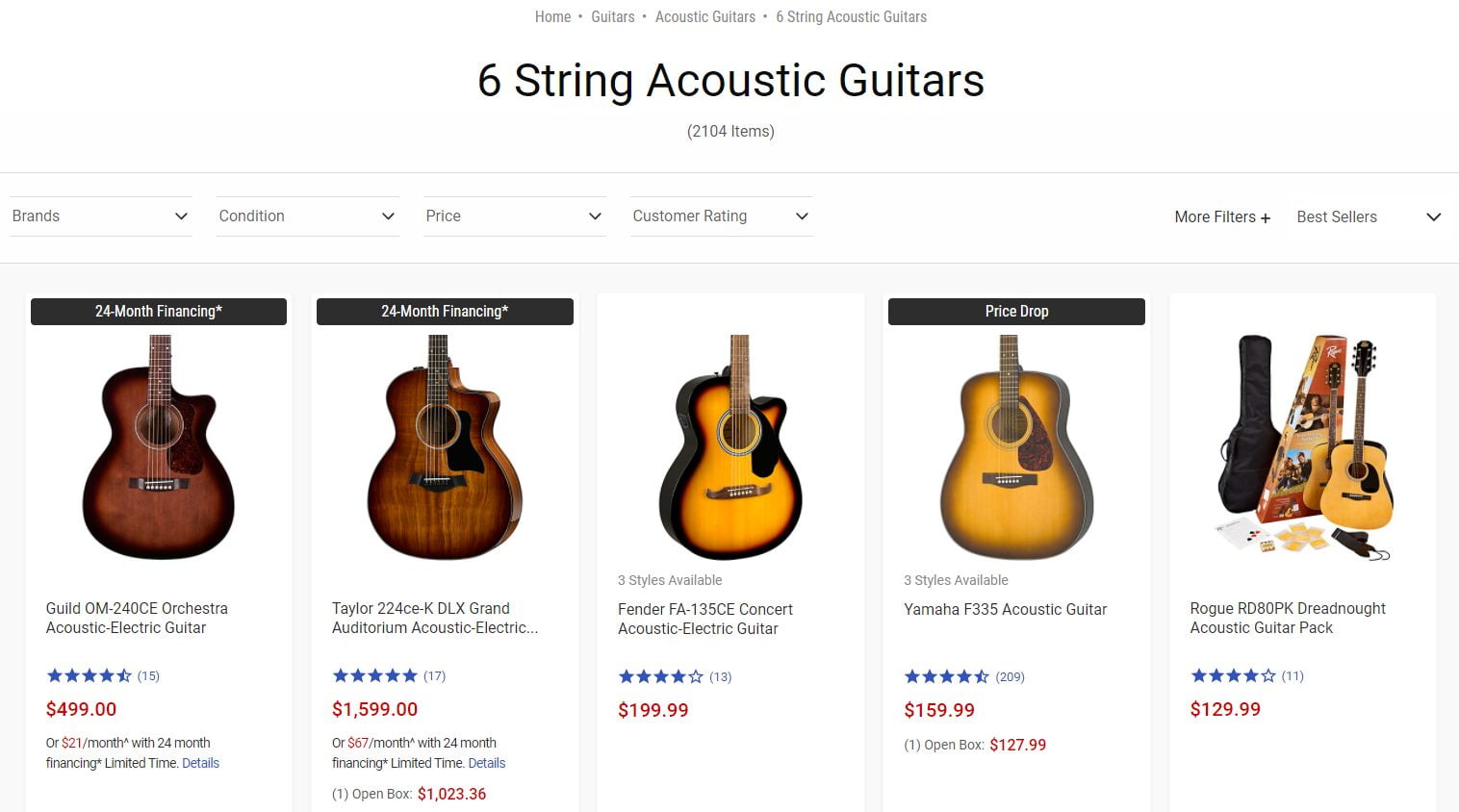 Musician's Friend stocks a wide range of acoustic guitars that cater to a lot of different skill levels. You can get the $1600 acoustic, but you can also get the $130 starter pack.

Musician's Friend has a similar system to Sweetwater with their acoustic inventory, which is similarly quite large and varied.

Guitar Center still has physical stores, making it easy to go in and play acoustic guitars. It's more of a pain to hook up amps and electrics, but we like Guitar Center for most gear, acoustics in particular. Improved customer service and solid site design have sweetened the deal. 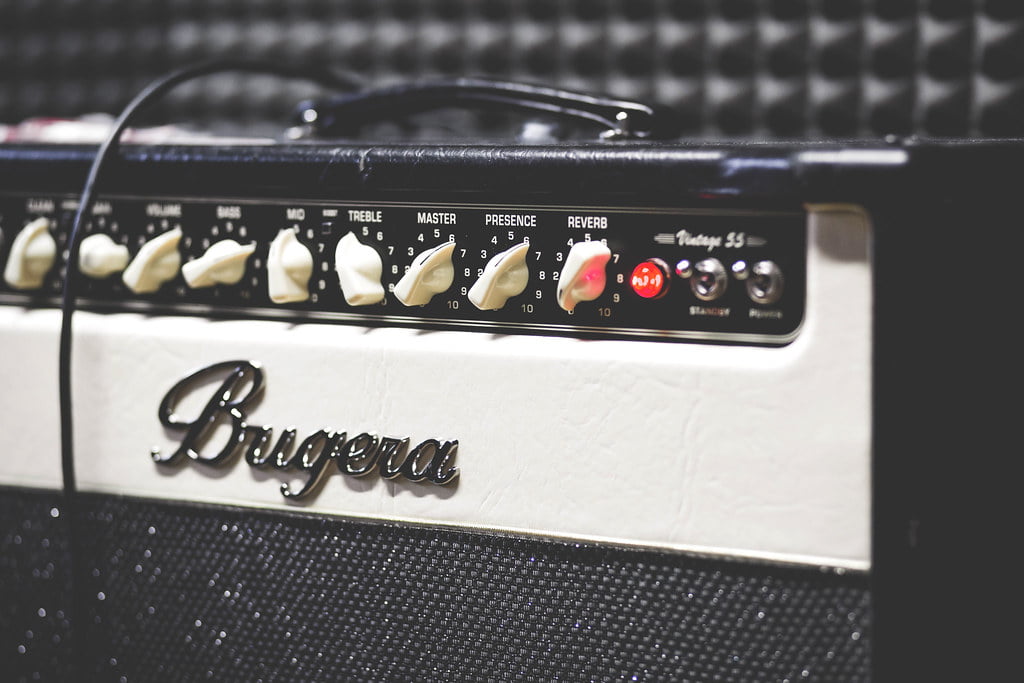 Where do we recommend buying an amplifier in 2023?

For amplifiers we have two entries including Reverb to make room for used options. Some people prefer to avoid used amps because of the potential for a blown speaker, yet you can save so much money on amps by going used that it's worth the risk, especially when sites like Reverb will list any potential defects.

Here's our list, with Sweetwater taking the top spot yet again. 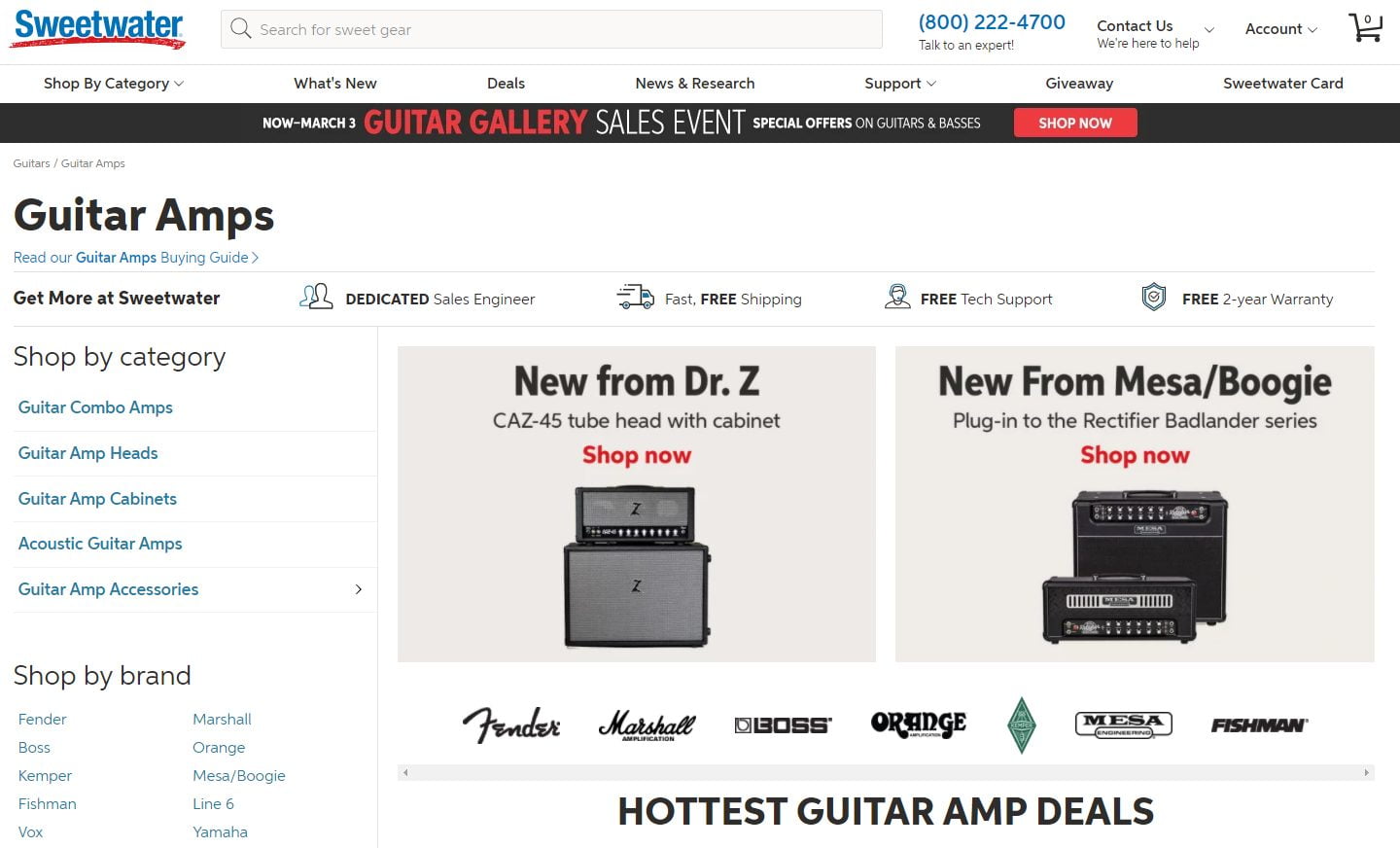 Sweetwater has established relationships with all the major amp manufacturers, including some of our favorite boutique companies. They're one of the few that carry Diezel and Mesa amps, especially at such a wide range of inventory. Again, customer service comes in handy here for new buyers or those with technical questions. 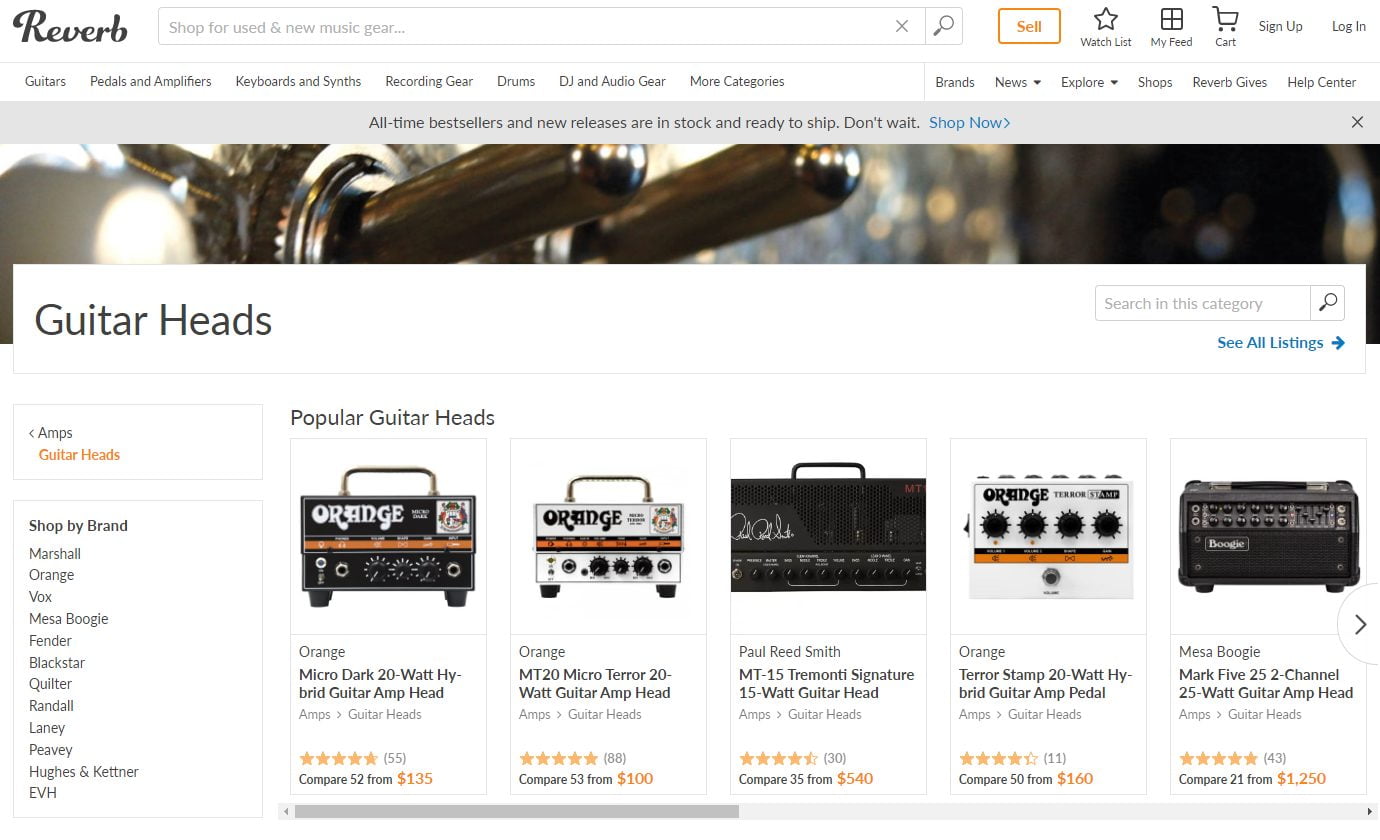 The used amplifier market on Reverb has the potential to save you a lot of money.

Again, Reverb steps up because of their used options and third party retailers. They're also - by far - my top choice for finding older amps and models that have been discontinued. 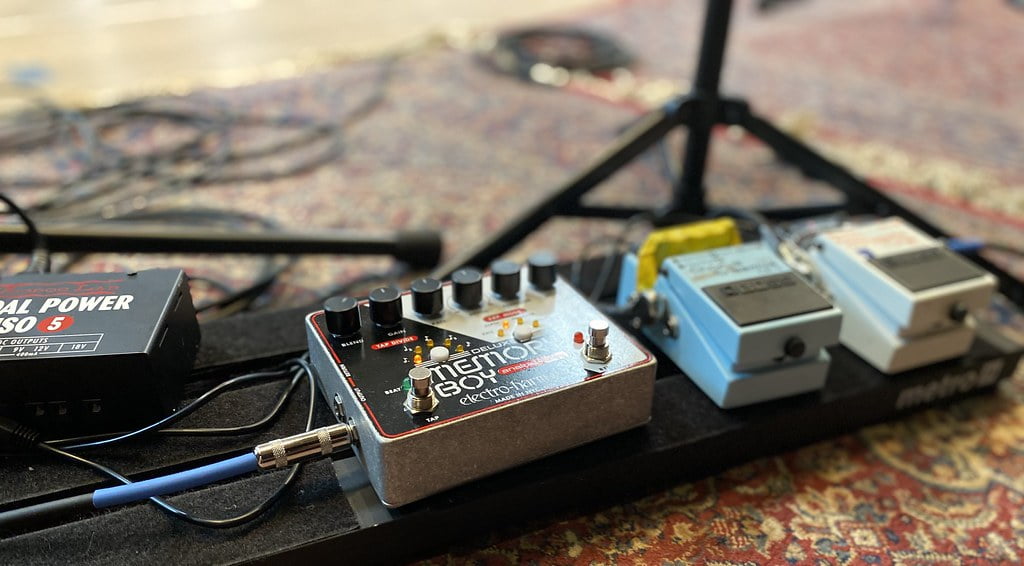 Where are the best places to buy guitar pedals in 2023?

In this section, we're giving out our awards (our picks) for the best place to buy guitar pedals in 2023. Keep in mind, we base this off personal experience, referencing companies that we actually use ourselves.

For pedals, we're looking for inventory, brand options, vintage/used options, and a generally wide range of mainline and boutique brands. 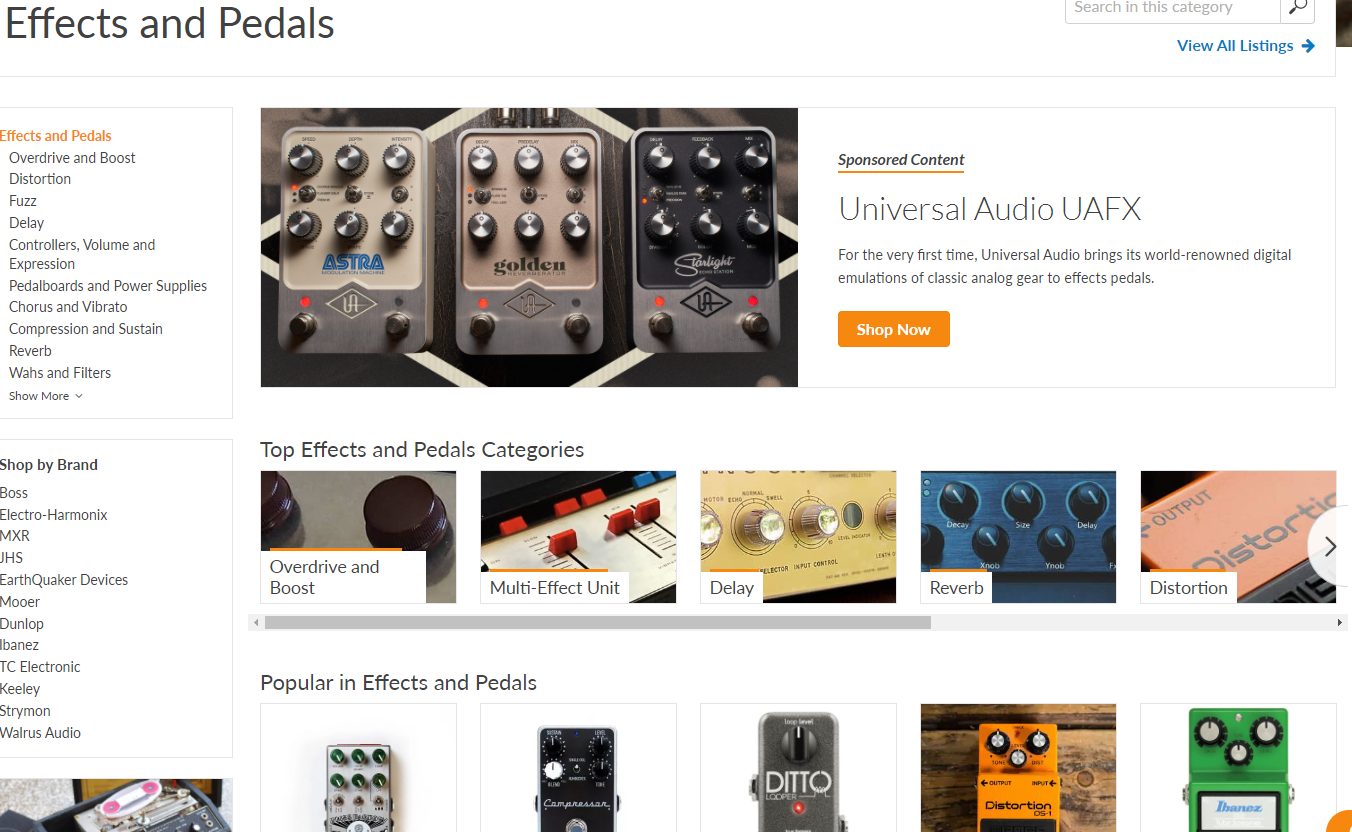 The used options on Reverb make them one of the single best places to buy guitar pedals.

Again, Reverb takes the top spot here because they're the best place to find the vintage pedals and boutique pedal brands that you can't get from mainline retailers. Old DOD pedals, the old VOX wahs, and any other stompbox you can think of is going to be available on Reverb. It's basically eBay for guitar pedals. 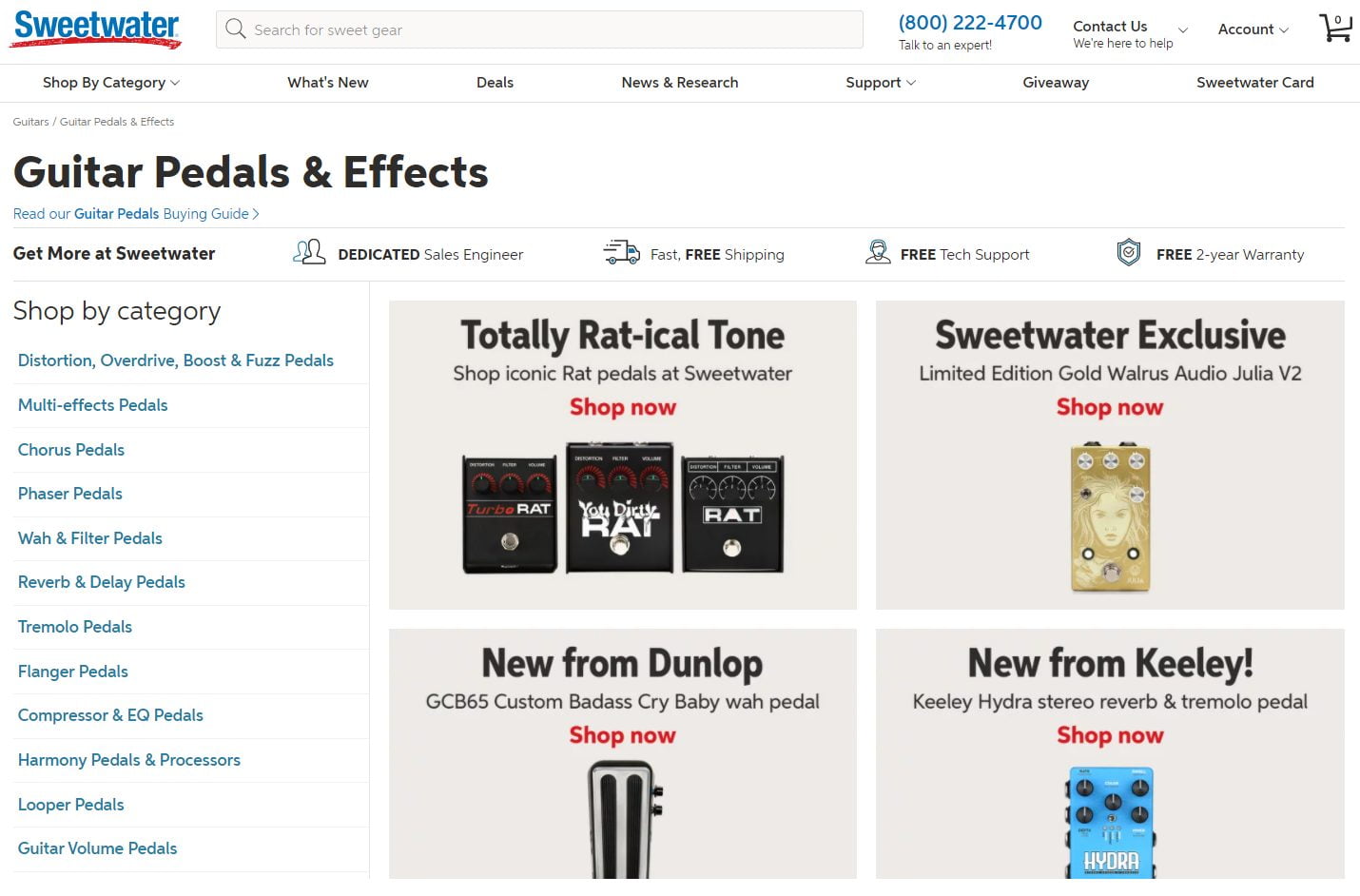 Sweetwater's selection of pedals and brands is excellent and our go-to place if you want to buy new.

Though it lacks the same wide range of vintage and used options, Sweetwater has a solid relationship with a handful of guitar pedal creators that they support and sell exclusively. If you're buying new and looking for the most popular pedal brands, Sweetwater is where we'd recommend going first.

Some used options, on-par pricing, and improved customer service gives Guitar Center clout in a number of categories, but we like them particularly for effects purchases.

Guitar Center has improved their customer service and will throw some used options into their newer retail options. We like them a lot in the effects department.

Where do we recommend buying bass guitars? Flickr Commons image via Morty More

For bass guitars, we use the same rationale we used with electric guitars. We're looking for the main brands, good relationships with boutique vendors, customer service, good variation in price, and plenty of new/used options. Once again, Sweetwater is an easy top pick.

For buying new bass guitars, Sweetwater is an easy first choice as they have reliably low price points, plenty of brand inventory, and all the same features we like for electric guitars.

If you don't want to buy new, Reverb is the next stop you should make and scour through the vast number of used options there. Remember, Reverb is comprised of third-party sellers, making it easier to get in touch with sellers if you have questions or problems with the bass you buy.

You might think there isn't a lot of difference between one reseller to another. But we've found that the culture surrounding these companies, and the way they do business does vary and change. While we partner with some of them - Sweetwater primarily - they're not all partners.

But we have definitely used all of them ourselves.

Otherwise, we wouldn't recommend them to you.

These are the resellers and retail companies that we use and trust most when it comes to guitars, pedals, amps, and music gear in general.

If you have thoughts, questions, or just want to share your own experience, drop them in the comments section below and we'll chat. See you then.