We're going to answer the question: How do guitar pedals get power?

It's a simple question, but with a surprisingly complex answer with some important considerations. When I got my first guitar pedal - a Danelectro Milkshake chorus - I didn't even think about how I would power it.

I honestly just thought it would work.

But guitar pedals run off little electrical circuits, which means each one needs its own power source.

The good news is, you have options. 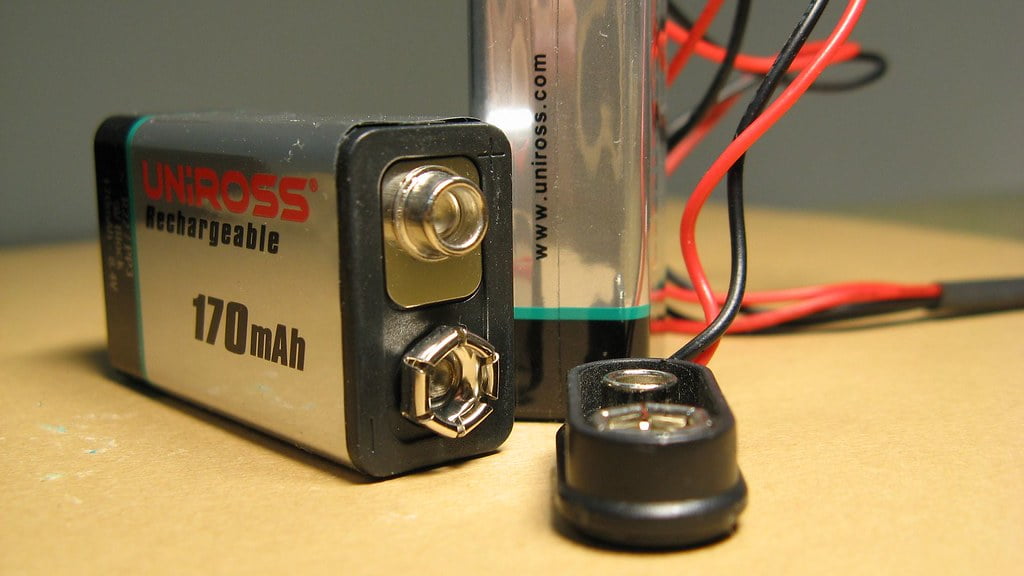 A single 9V battery can be used to power most guitar pedals. Flickr Commons image via Cujan

Most guitar pedals require nine volts of power to operate and have a compartment for a 9V battery. This is the most immediate power solution, but it's not particularly efficient, just because 9V batteries or expensive - for the amount of power they provide - and guitar pedals tend to eat up battery power very quickly. 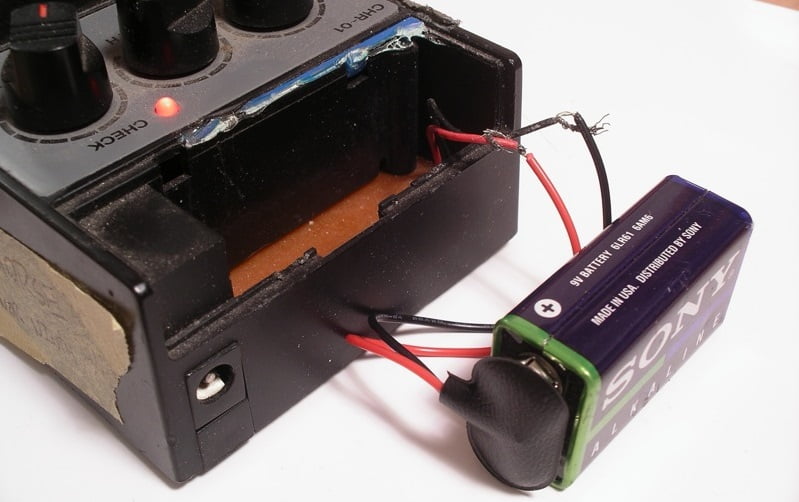 Note that pedals - even when they are bypassed - will actively drain power if the battery is connected and a guitar cable is plugged into the input of the pedal (usually the right pedal jack).

We need some alternatives.

For those who want to run only one or two pedals, a single 9V power adapter is usually the best solution. These are adapters that plug into the wall and then plug directly into your pedal, which means you no longer need a battery. They're cheap, easy to use, and provide isolated power when connected to one pedal.

There are forms of 9V power connectors that connect to one another and to your guitar pedals.

These are usually called "daisy chains."

When you have a string of adapters connected to one another, this allows multiple guitar pedals to share power from a singular power source.

This type of guitar pedal power supply is commonly called a daisy chain because it chains together multiple power lines for your pedals. 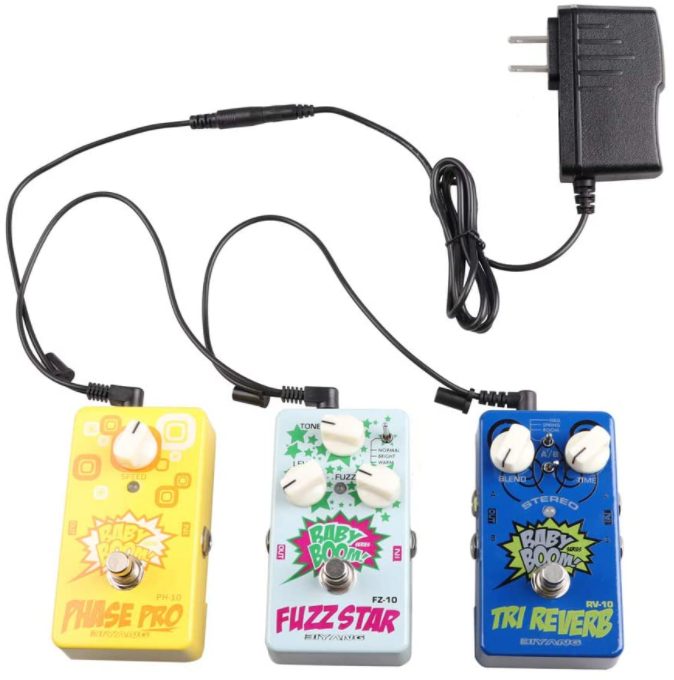 Example of a daisy chain used to power three pedals at once.

For example, you plug into a single wall socket, then you have several 9V connectors branching off that single plug. These are also usually quite cheap, though they have some problems that you don't get with the single adaptor or even the 9V battery.

The single biggest issue is with daisy chains is that they can cause noise in your signal.

This is because of the concept of "sharing" power. It's convenient and cheap, but multiple electrical devices sharing a circuit can cause noise coming out of your guitar amp. It ends up being a lot of signal interference and can be extremely disruptive.

I've also seen them get worse over time, becoming more noisy as they're used. 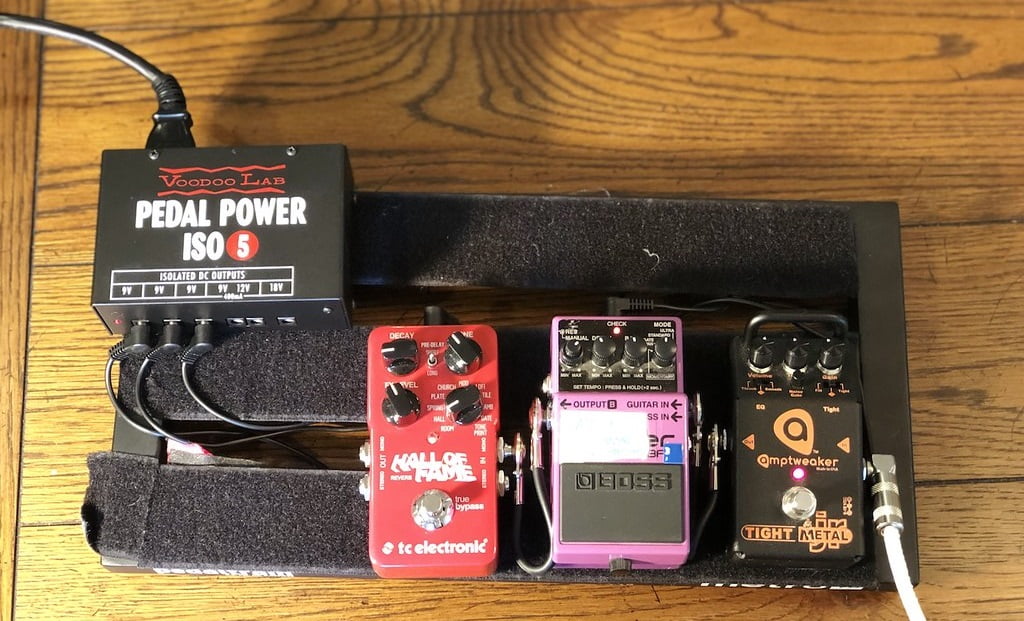 The absolute best solution for powering your pedals is an isolated power supply. These boxes have multiple power sources, but are also built with technology that isolates the power in each connection.

This means your pedals aren't sharing power, despite being connected to the same device.

The result is a noise-free operation of as many pedals as you can hook up to the power supply itself.

Most power between six and 12 pedals.

They're expensive compared to the battery and power adapter options, and tend to run between $100 and $200 in most markets.

Still, it might be worth it if you have a lot of pedals. 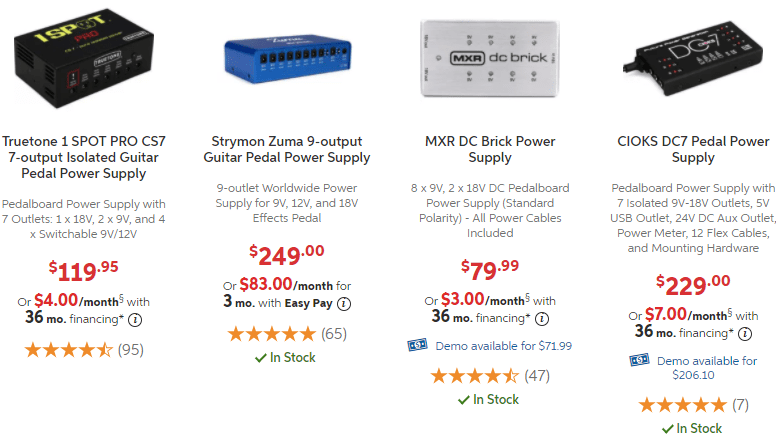 Power supplies like the ones pictured above tend to be fairly expensive. Image via Sweetwater

Guitar pedals need power - and there's no getting around it, but all of these are viable options, depending on your situation.

Which one is right for you?

If you aren't sure about what kind of power source would be most ideal for you in your situation, leave a question in the comments section below and I'll jump in to help out as much as possible.