How many pickups does a PRS SE Custom 24 have?

Most PRS guitars, including the more affordable PRS SE Custom 24 (and the SE series models in general) come with two humbucker pickups at the bridge and neck positions - also called a dual humbucker configuration.

The PRS SE Custom 24 is a vastly more affordable version of the mainline PRS Custom 24, which hovers around a $4000 price point. The SE version is less than $900 in most cases.

Despite the cheaper price tag, the SE Custom 24 also has a dual pickup configuration with two humbuckers. This is the default for most PRS guitars, placing one pickup at the neck and another at the bridge position.

The PRS SE Custom 24 has two humbucking pickups at the bridge and neck positions.

About the Two Pickups

The two pickups on the SE Custom 24 are the following:

These are a sort of branded pickup by PRS, where the mainline Custom 24 has a similar, though nicer set of humbuckers.

PRS has their own pickup line, just like Fender and Gibson.

In most cases these guitars have two humbuckers with a three-way toggle switch to control them. These are the positions you can choose:

There are some PRS guitars that employ a "coil splitting" technique which means you can use half of one humbucker for some additional tone variety. On the PRS SE Custom 24, you can do this by using the push/pull mechanism on the tone knob. 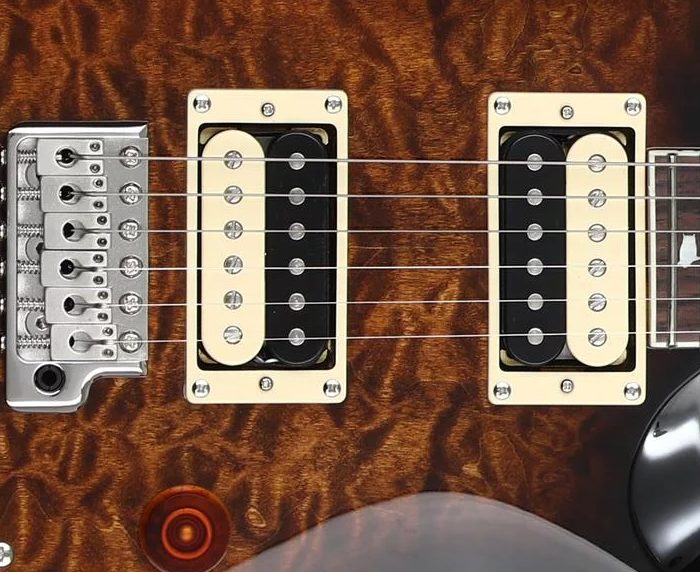 The PRS SE Custom 24 comes with two humbucking pickups, which is an extremely common pickup configuration.

About dual humbuckers in general

On the PRS SE Custom 24 they help create a heavier and more percussive tone that has long characterized the PRS brand.

While there are other factors that play into the tone of a guitar, having two humbuckers is where almost all heavy guitars start.

If you have questions about the PRS SE Custom 24 or another PRS guitar, feel free to get in touch via the comments section below and we'll help out as much as possible. We'll see you there.