Note that the iRig HD 2 now comes with AmpliTube 5 SE which then makes in-app purchases available for different amps and pedals. We've changed the article's copy to reflect this, but note that screenshots are still from AmpliTube 4, though functionality should be similar between the two versions of the software. Hat tip to Johnny in the comments section.

The iRig HD 2 is IK Multimedia's second iteration of the immensely popular iRig HD. Both are mobile guitar interfaces, designed to run your guitar's signal through any mobile device, Mac, or PC computer. It's a simple way to integrate phone and/or tablet compatibility into your home recording setup.

I had a chance to unbox and check out the iRig HD 2 firsthand and play around with some of the new features, which include the following:

My iRig HD 2 review is not paid.

Guitar Chalk does not accept payment for our reviews, nor do we spend time reviewing products that we believe to be a waste of your time. I'm reviewing the iRig HD 2 because I believe, up front, that it's useful, valuable and relevant to today's guitar player.

IDEAL FOR: Quick practicing, practicing when you need to avoid disturbing others, small studios, pairing with the AmpliTube 5 SE software and quick recording.

The iRig HD 2 interface, hooked up to an iPhone.

The premise and usefulness of the iRig HD 2

If you're not familiar with the IK Multimedia company, they specialize in mobile music production devices, and have been heavily focused on guitar interfaces since their inception and the creation of the AmpliTube app.

Though a question in your mind might be this:

How, when and where is something like this useful?

The first advantage is that it allows you to use mobile amp modeling and effects processing applications, namely IK Multimedia's AmpliTube software, pictured below: 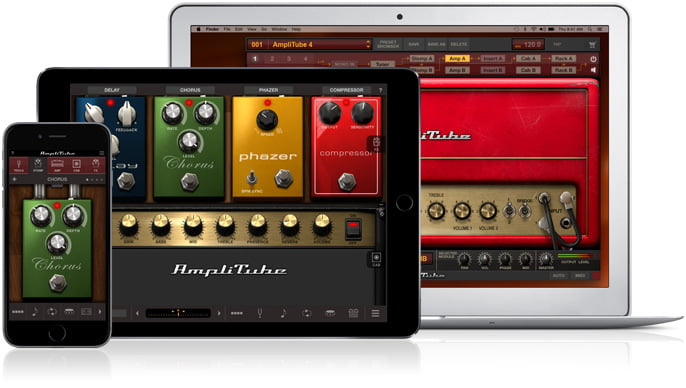 The AmpliTube software can be used on iPhone, iPad, iPod Touch, Mac and PC. Image via IK Multimedia

It allows you to route your guitar's signal through one of these devices, meaning your phone, tablet or computer becomes a fully-functional effects processor.

You can then use programs like AmpliTube 5 (full or SE version) to run effects and amp models, or to record and produce your own music. Even other DAWs like GarageBand, Ableton Live or any software that can recognize and hear external audio devices, will be compatible.

Another major advantage of something like this is that it allows you to practice and play guitar nearly anywhere.

My wife and I have four kids, who go to sleep fairly early. After they're in bed we watch TV, read or just hang out in the living room. There are plenty of times I'd love to plug in and play guitar, but can't, because either my wife is watching a show or I'm afraid I'll wake the kids up.

Moreover, it's just a lot of work to haul my entire swath of guitar gear up into the living room for what amounts to 20 minutes of practice. iRig HD 2 connected to an iPad.

The beauty of the iRig HD 2 is that all you need is your guitar and phone.

When I was testing the iRig HD 2, I was able to pull up AmpliTube on my phone, put on a set of headphones and play through a Mesa Boogie Triple rectifier amp model (more on this later) without bothering anyone.

It was perfect for that situation and didn't feel like a cheap, tiny headphone amp.

Aas you read through my iRig HD 2 review, keep this context in mind.

It's probably not going to be your main rig, but the iRig HD 2 has some major situational advantages. 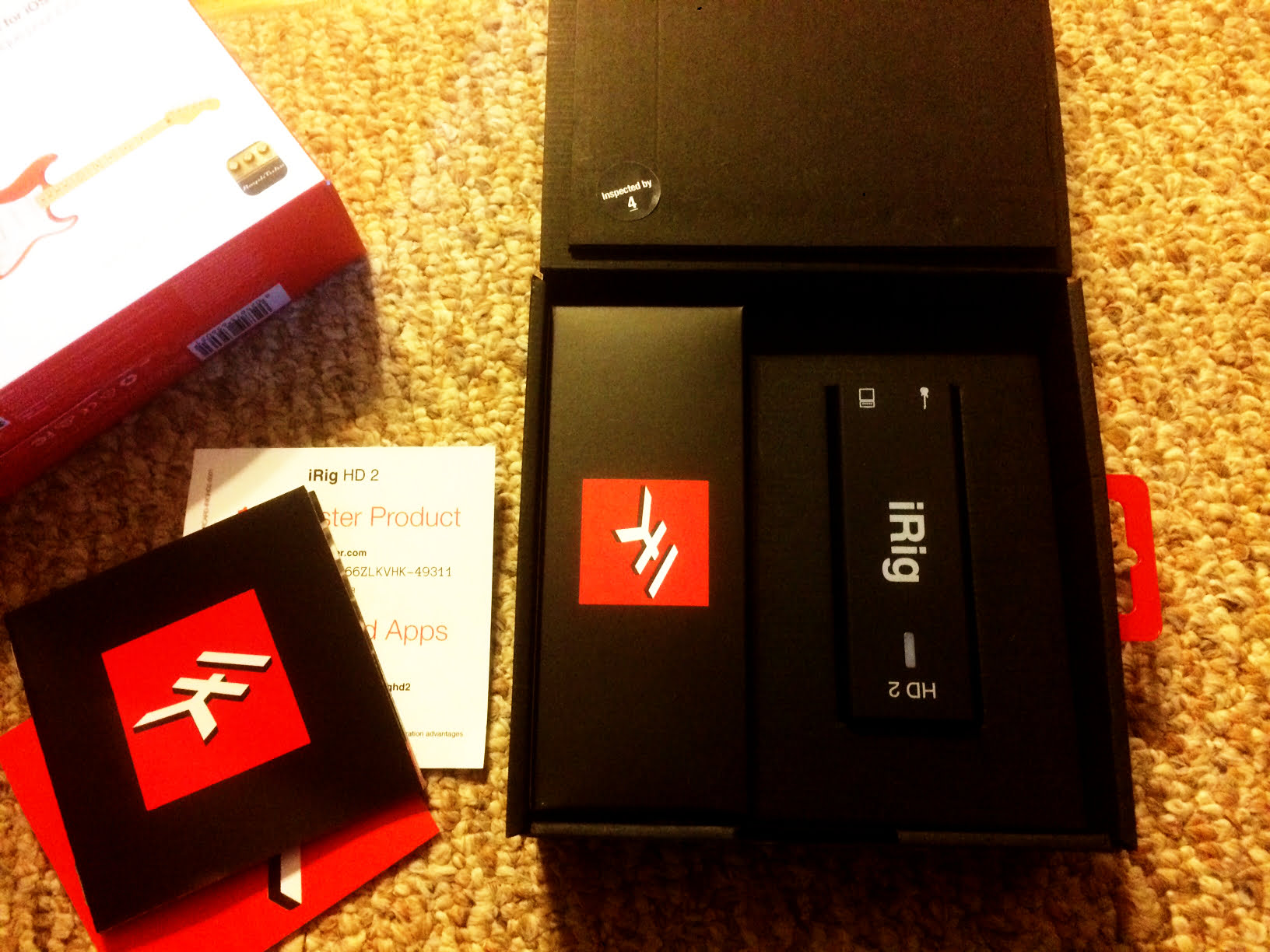 The iRig HD 2 comes nicely boxed with all the necessary cables for whatever device you want to hook up to.

Since I was using my Macbook Pro, I used the USB cable connection.

Once connected, the iRig HD 2 is powered (indicated by a blue LED light) via the USB cable and is class compliant. This means it doesn't need drivers to work, which is usually the case when IK Multimedia gear is combined with Apple products.

For PC and Android users, I can't verify one way or the other. 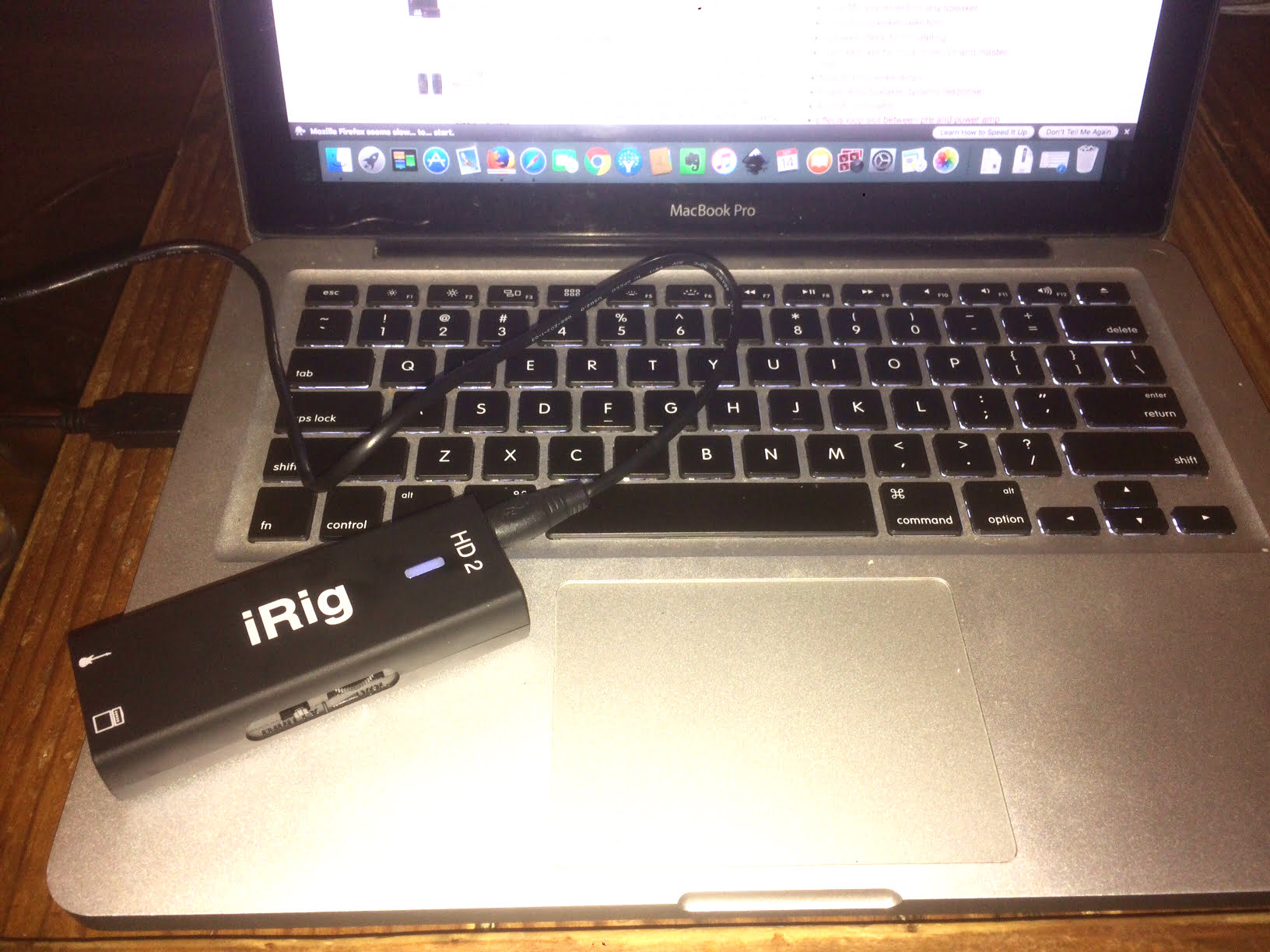 The iRig HD 2 hooked up to my Macbook pro via USB.

Once this is hooked up, I added my PRS CE 24 via the guitar input (marked by a small guitar-shaped icon). 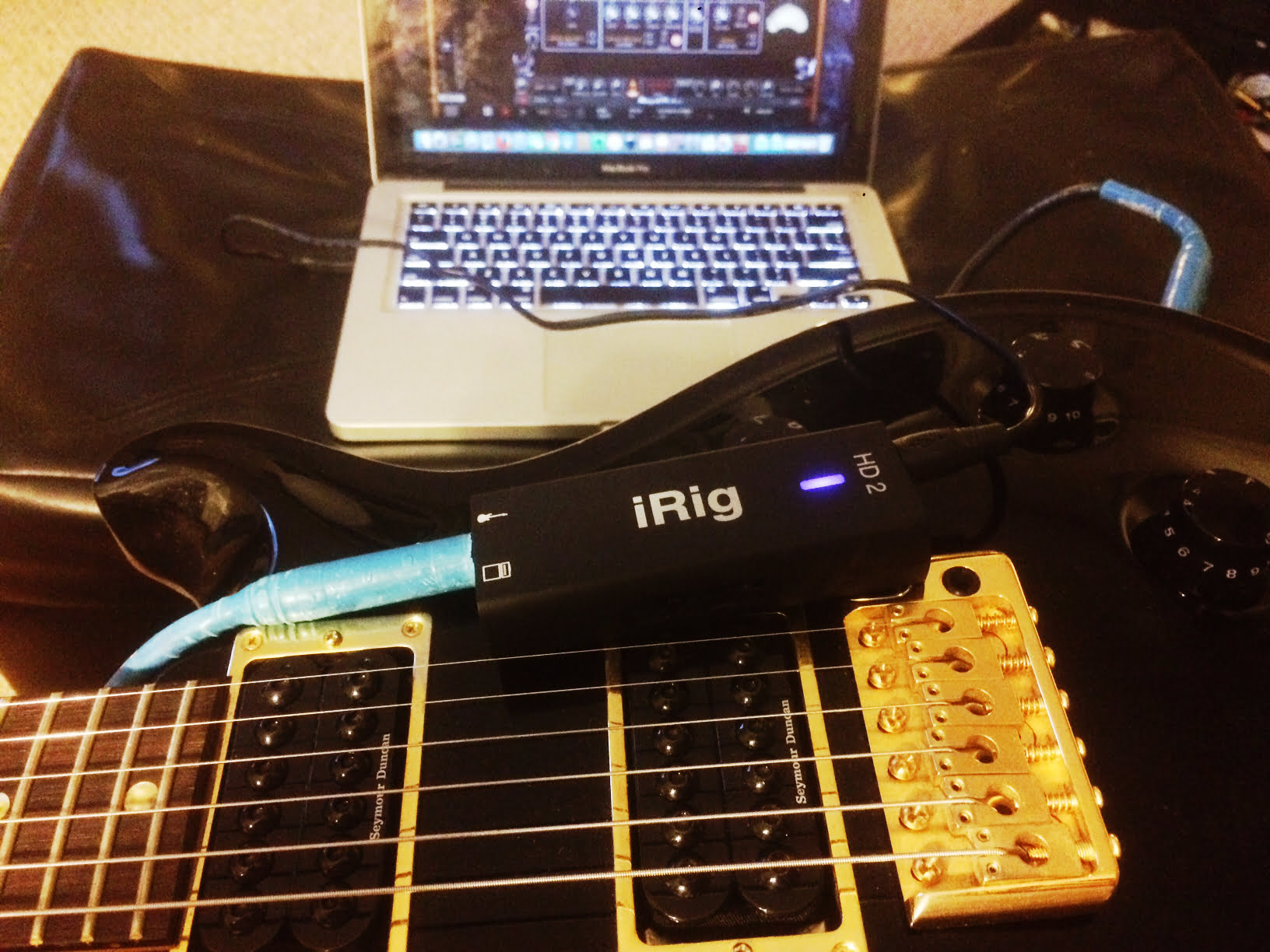 iRig HD 2 connected to my Guitar.

Once your guitar and device of choice are connected, you have a few different options for listening in. The easiest thing is to use the headphone jack in the HD 2, though there are a number of different options.

I used a set of over-ear Skull Candy headphones, which sounded fine. Most any over-hear headphone or earbud set will do.

However, you can also use the amplifier output jack to go to your guitar amp, a powered speaker or studio monitors. The same is true of the 1/8" headphone jack, if you'd prefer to use a set of monitors from that output.

For example, the iLoud Micro Monitors by IK Multimedia work great using the headphone output, since they have a 1/8" adapter cable.

There are a lot of different ways to set it up.

Setting up the iRig HD 2 to work with AmpliTube

The iRig HD 2 was class compliant with the Mac OS, but I still had to make sure it could "talk" with whatever software I was using. It sounds tricky, but is quite simple to setup. Since I was using a Mac, the first step was to go to Settings - Sound and set the iRig HD 2 as both my input and output devices. 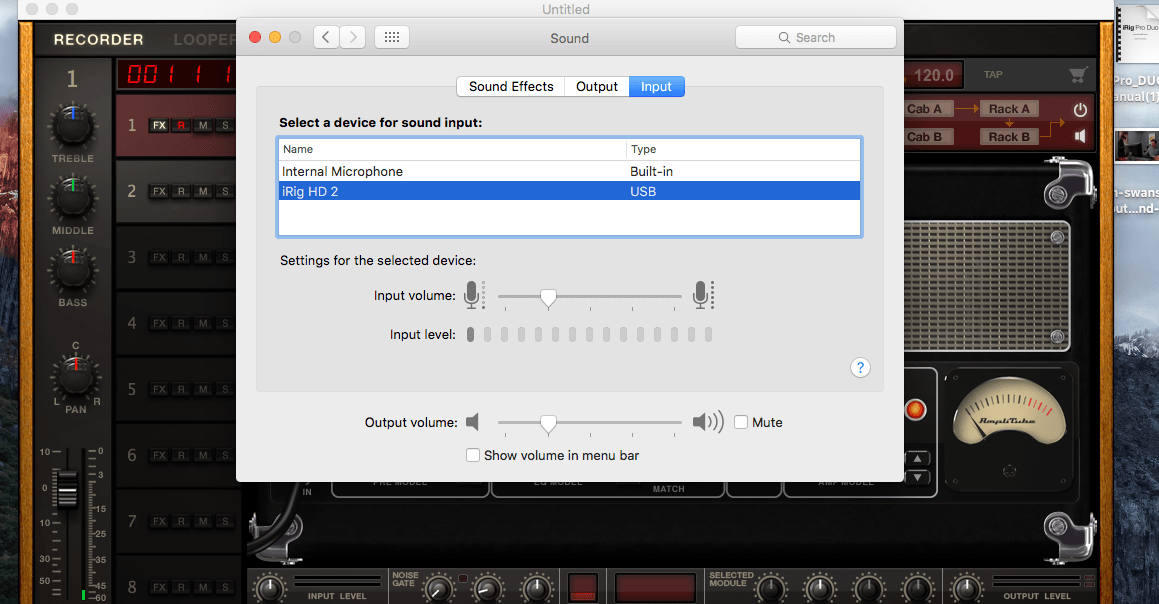 Setting the iRig HD 2 as the default input device.

In the sound settings, double click iRig HD 2 to make sure it's the default device for sound input. 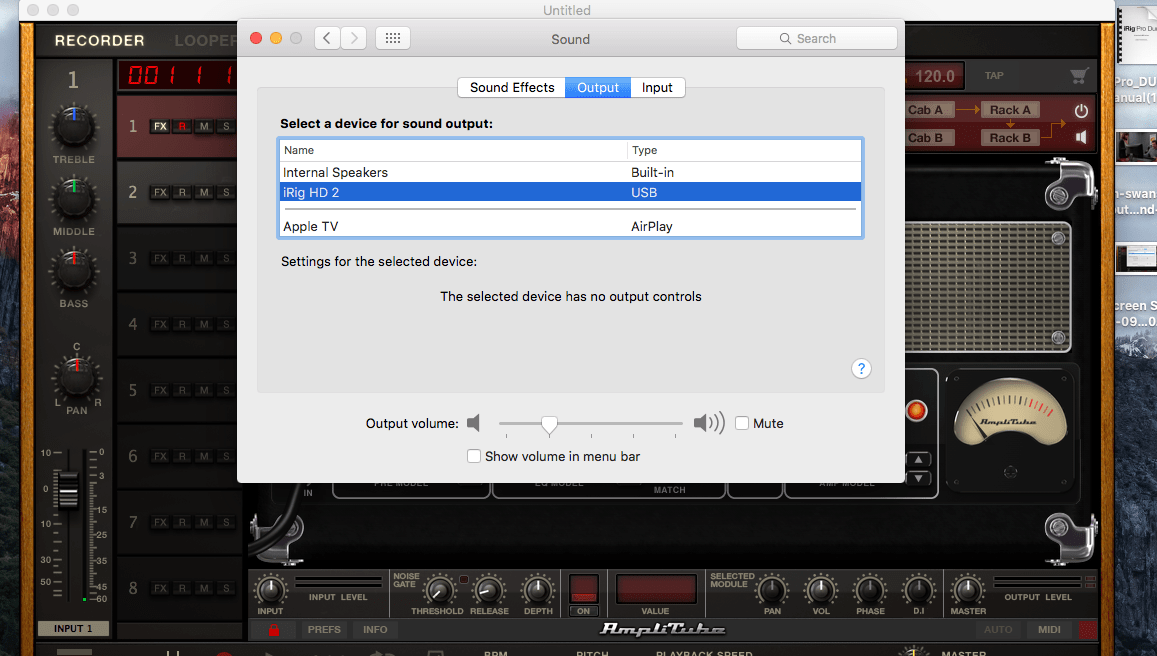 Setting the iRig HD 2 as the default output device.

Repeat the process for the output tab, double-clicking iRig HD 2 to set it as the default device.

Now, you need to do the same thing to the AmpliTube 5 SE software or whatever DAW you might be using. In AmpliTube 5 SE, the process is really easy and will be similar in other applications.

Open AmpliTube 5 SE and click on the Settings menu item. From there, select Audio MIDI Setup. This pulls up the following window: 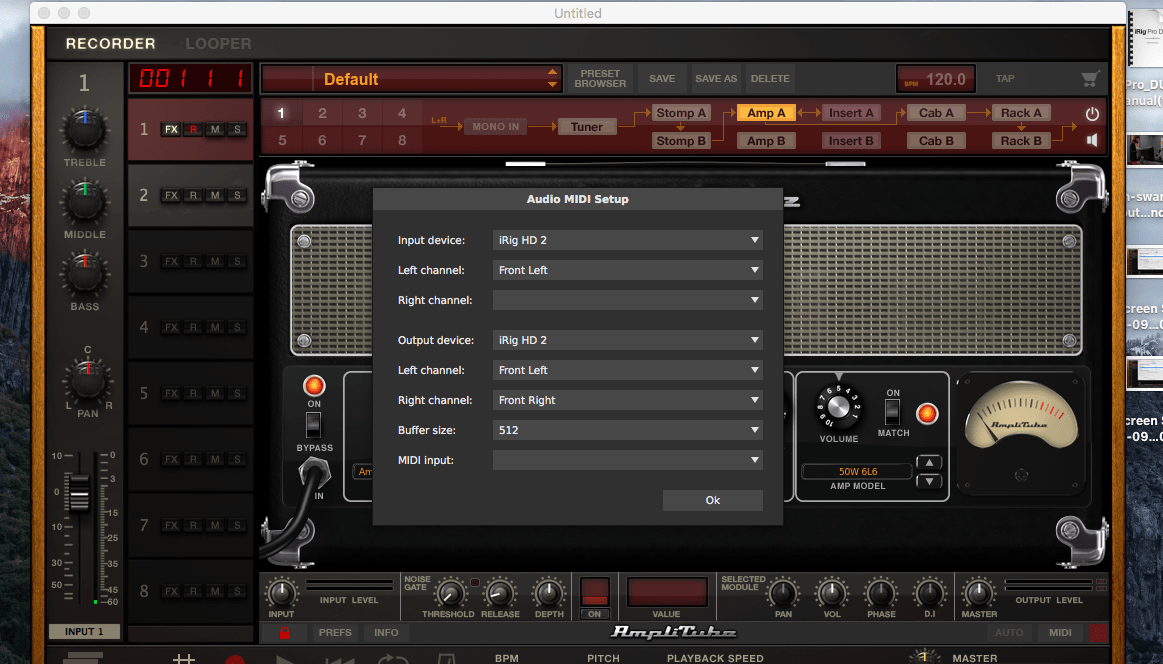 Make sure the iRig HD 2 is set as both the input and output device.

If they aren't already set correctly, make sure the input and output devices are set to the iRig HD 2, then click OK. At this point, you should be able to hear your guitar through your headphones or external monitor.

Physical volume and gain controls on the iRig HD 2 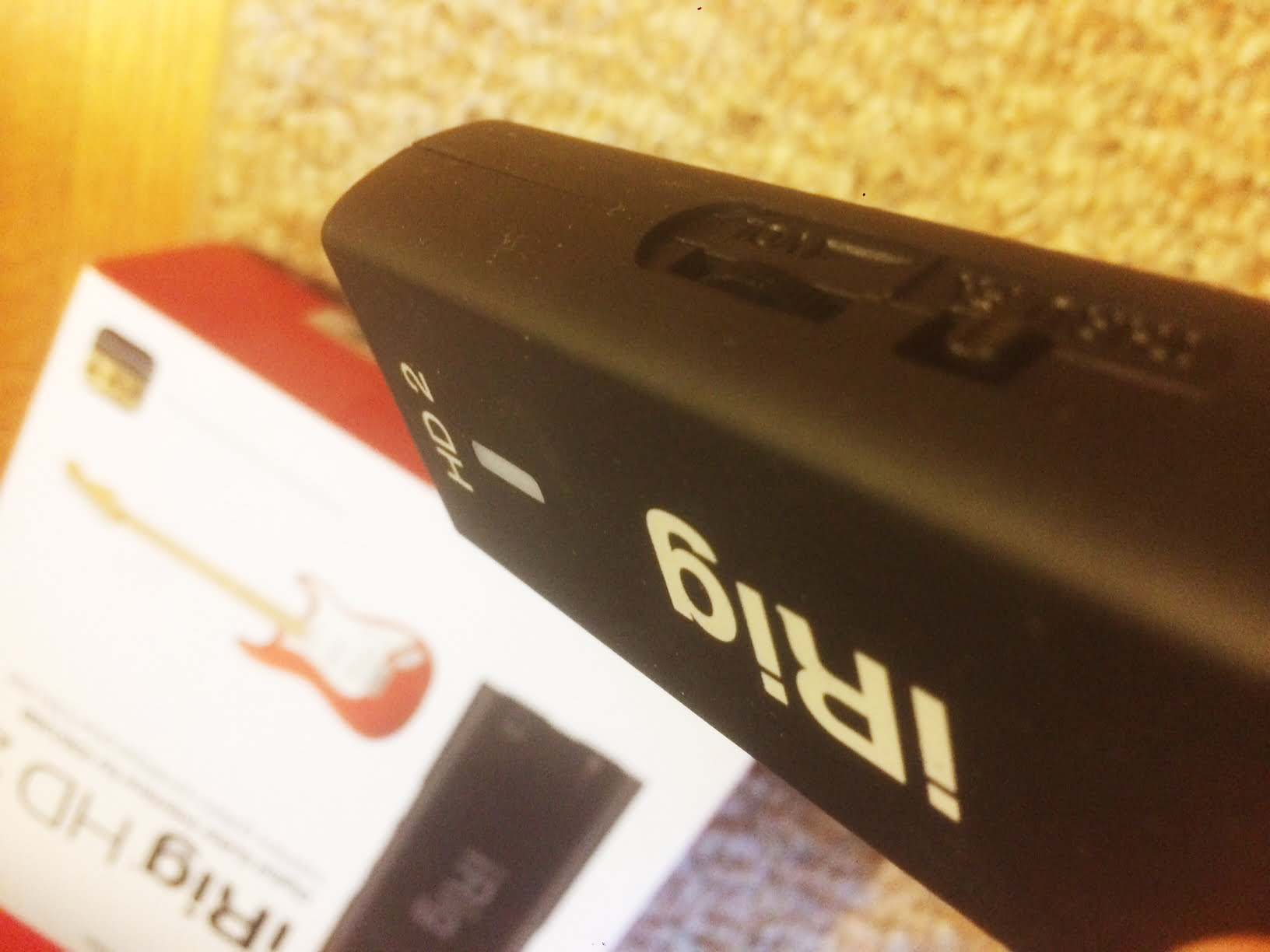 Volume control for the headphone out on the iRig HD 2 (gain control is on the opposite side of the enclosure).

Note that the iRig HD 2 has two signal level controls on the enclosure:

The volume wheel controls the master volume going to your headphones after the signal has been mixed. The gain wheel controls signal strength at the preamp level (which can increase distortion in some instances, just like a real guitar amp).

You might have to tinker with these two settings to get the mix to sound right and avoid clipping, though in the time I spent testing the unit, these controls were intuitive and easy to set.

Once I had everything plugged in and was able to play (I tested headphones first, then the iLoud Micro Monitors) the tone I got out of the system was absolutely phenomenal.

Everything was clear, crisp and sounded like a real guitar amp.

Just for kicks, I went ahead and installed the Mesa Boogie Triple Rectifier amp model in AmpliTube 5 SE and used that for most of the testing. 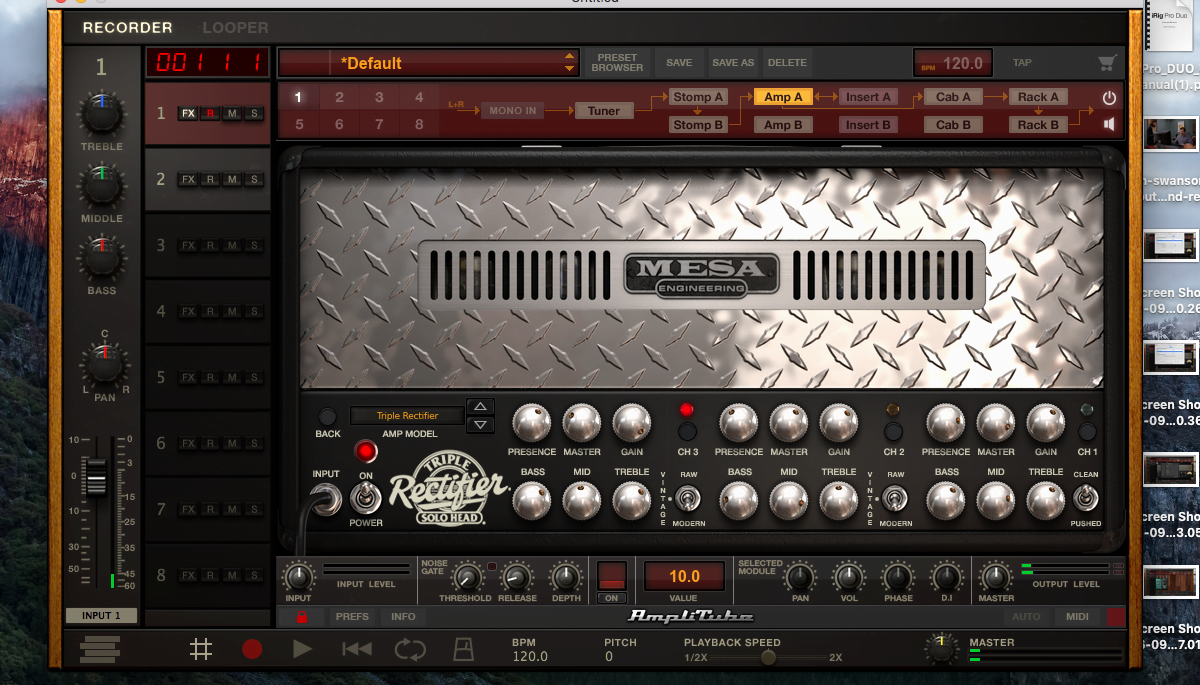 I used the Mesa Boogie Triple Rectifier amp model in AmpliTube 5 to test the HD 2.

Heavy distortion came through a little too noisy at times, though not more so than what you'd expect with a physical amplifier. All the high gain settings I tried at various volumes sounded full and studio-quality, like you would expect out of a full rig.

The clean tones were even more of a treat, especially when I added some of AmpliTube's effects.

With AmpliTube 5 SE's default amp, I used the clean channel and, at times, a little reverb or chorus layering. 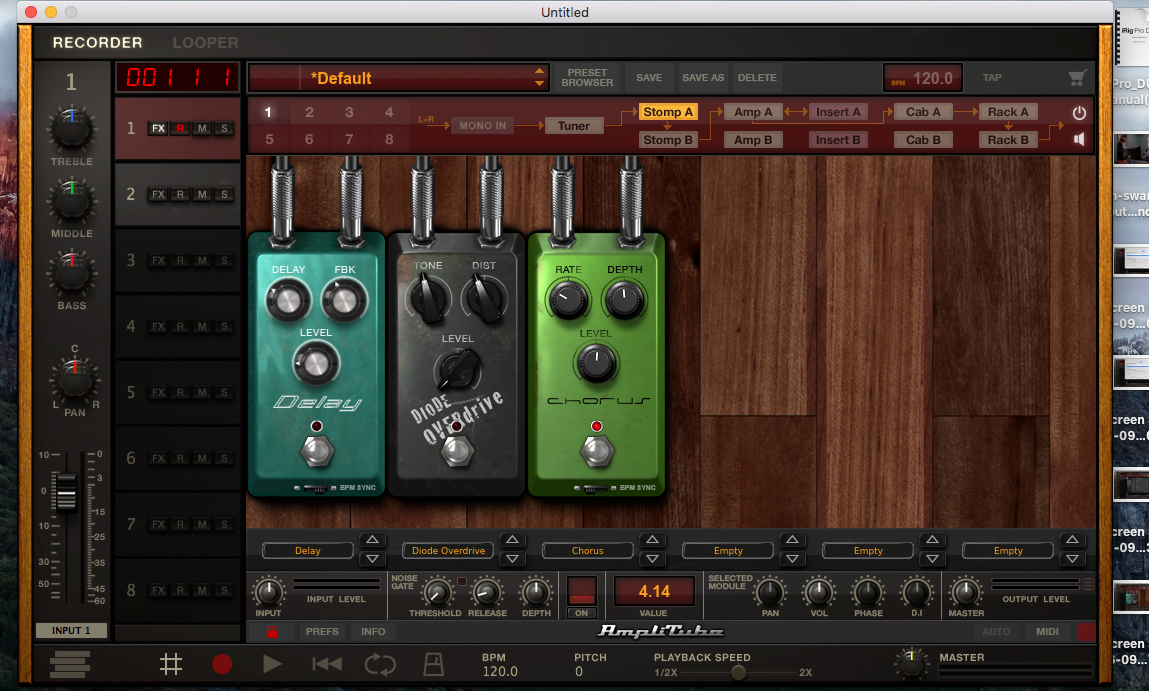 Every effect I used sounded great through the iRig HD 2's interface, which also responded incredibly well to changes directly from my guitar. My 2005 PRS CE 24 has five pickup combinations, all of which sounded rich and distinct through both the headphones and the iLoud monitors.

Tone and volume knob changes were only subtle, and sounded best when they were both wide open.

Convenience and Ease of Use

As I mentioned in earlier paragraphs, the best "feature" that the iRig HD 2 provides is the convenience and ease-of-use that you get from being able to play guitar through your computer or mobile device. I was able to enjoy a full range of effects and amp models, on my couch, while my wife watched TV and my kids slept.

It was the most productive I've ever been on my guitar in that setting. The time from unboxing the iRig HD 2 to playing was short; probably less than five minutes if I hadn't been taking my time and wading through packaging.

Aside from some basic volume tweaking, it's ready to go straight out of the box.

I've heard some people say that they've experienced latency issues with the iRig HD 2, though that wasn't a problem for me, during the time I spent testing the unit. I know that in some situations, a sound card or compliancy issue can cause this, especially if you're pairing the interface with a PC.

Make sure your operating system is updated and that you have updated drivers for your sound card (especially if you've installed a sound card that didn't ship with the computer).

If you've done that, and there isn't something wrong with the physical USB port or cable, latency shouldn't be an issue.

Using in a Windows 10 Environment

To be clear, I did not test the iRig HD 2 in a Windows 10 environment. However, I have used it in Windows 7, without any significant issues. If my memory is correct, I didn't even need to download drivers for it (Windows 7 usually pulls hardware drivers automatically).

Windows 10 should handle the HD 2 in a similar fashion, and I do know that the Amplitube 5 SE software works great on both Mac and PC platforms.

Here's where they address connectivity on their product page:

The iRig HD 2 is a great tool for any guitar player, though I like it particularly for the following scenarios:

Easy-access living room practice is a fantastic way to use the iRig HD 2. If you like the AmpliTube 5 software and you want a quick way to access that, the HD 2 is going to be the most compatible and convenient interface to use.

IK Multimedia wrote the book on mobile guitar interfaces, and this iteration of the iRig does everything possible to build on a track record of success.

It's an easy editor's choice.

Written by Bobby on Interfaces and Reviews

Written by Bobby on Interfaces and Reviews