Though a difference in format makes this somewhat of an uneven comparison, we believe JamPlay is a more thorough and comprehensive solution for guitar-specific study. While Yousician can be fun and motivational for beginners, it fails to meet the standard of depth and thorough concept coverage that JamPlay sets forth.

Try Out JamPlay for Free

JamPlay and Yousician are two very different programs. However, they both provide online guitar lessons, essentially marketing themselves to the same group of people. In this article, I'm doing a JamPlay VS Yousician comparison, putting the two programs side-by-side to see how they compare to one another in a series of grading charts.

This will make it easy for you to see the strengths, weaknesses, and specs of each program and help you decide between the two.

The main difference between JamPlay and Yousician

Aside from all the nuance and detail that we'll cover about each program, the main difference between JamPlay and Yousician is the method they implement. JamPlay is a series of courses and lessons provided in a pre-recorded video format, while Yousician is more like a video game in the form of a mobile and desktop application that listens to your playing and analyzes it.

If you have a preference of how to learn guitar, this is the biggest difference you'll need to consider.

In this section, we've provided links to JamPlay, Yousician, and a couple other programs that we've reviewed and rated. Please note that we partner with Guitar Tricks and JamPlay to support Guitar Chalk, yet that in no way impacts our ratings, reviewing process, or the cost to you. Thank you in advance for your support.

JamPlay VS Yousician: A Side-by-Side Comparison

Another major difference between JamPlay and Yousician is that Yousician covers multiple instruments, while JamPlay simply focuses on guitar and bass. Yousician is also a little more discreet and unclear about their free trial process, where some have reported 14 day trials, while the most recent information shows 30 days.

Yousician is also more expensive than JamPlay at $30 per month or $180 per year. However, it's worth noting the the Yousician pricing structure actually has a lower-tiered membership, which is cheaper.

The Yousician home page as of July 2022, with Metallica promo.

The only area where we might recommend Yousician over JamPlay would be if you're a total beginner. At that skill level, Yousician has some helpful qualities like being able to make pattern memorization easier and helping you to engage with material for a longer period of time.

Since the video game interface is colorful and fun to use, it's a great way for beginners to spend more time on the fretboard.

Yet, for all skill levels that go beyond the beginner stage, JamPlay is a far more useful and comprehensive program. 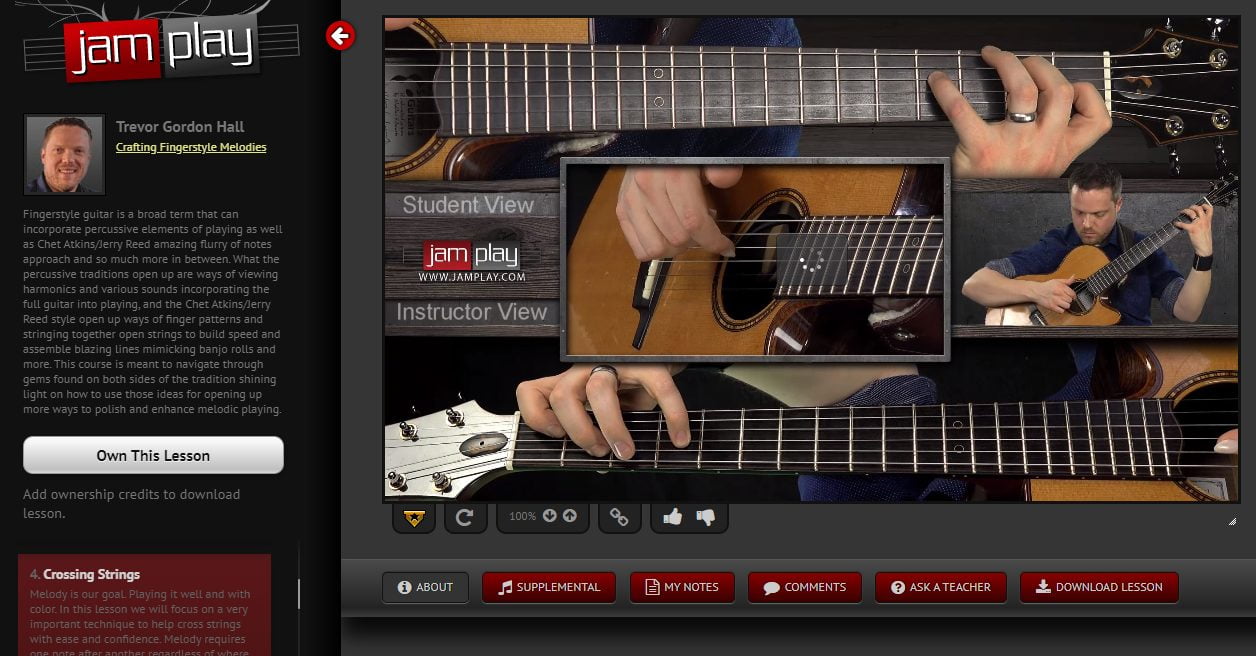 The JamPlay system is far better for intermediates and advanced players, though good for beginners as well. 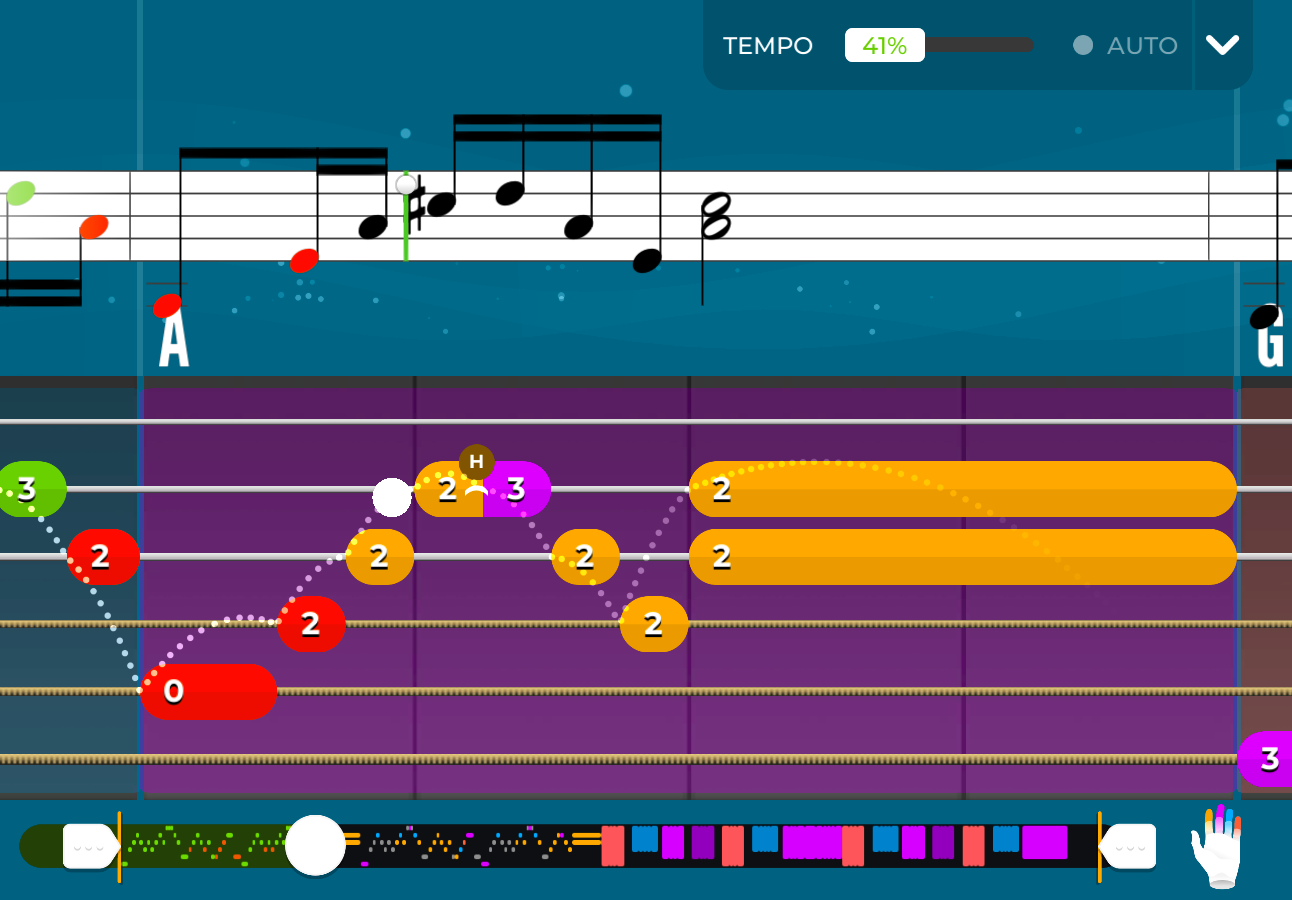 The Yousician system is addictive and fun to use, making it a helpful tool for beginners that want to get more fretboard time.

Both sites do a fairly good job with navigation and user interface design. They're easy to use, pleasing to look at, and not overly distracting with how they organize their content. We found Yousician a little more difficult to work through, just because they don't rely on courses the same way programs like JamPlay do.

If it's purely a matter of aesthetics, Yousician does look more modern and more streamlined than JamPlay. But in terms of finding what you need and navigating through content, JamPlay does a far better job structuring those elements. 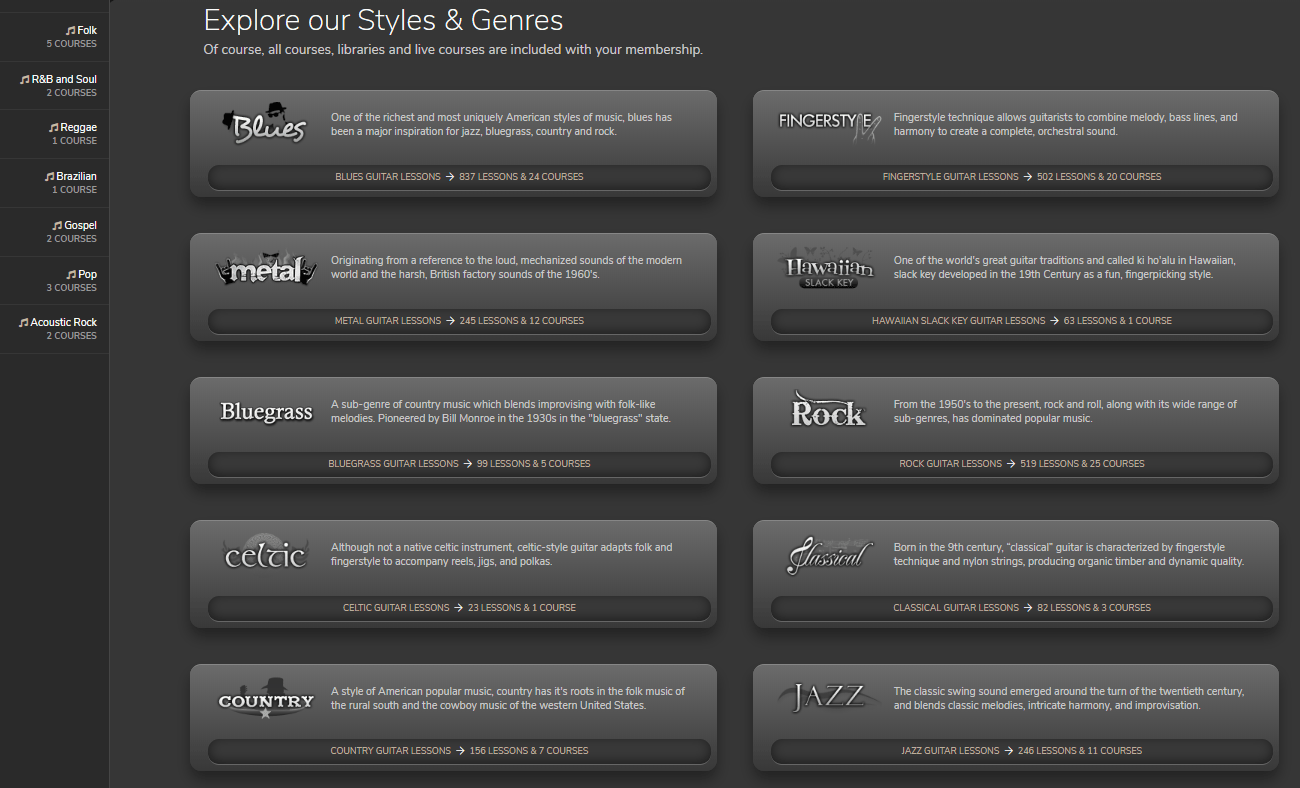 Some of the style and genre sections in JamPlay

Learning paths in Yousician look great, but can be hard to follow at times.

In this section we usually compare one video player to another, since that's where the user will spend most of their time. But with programs like Yousician, we have to compare the video game interface to the video player of a program like JamPlay.

Between the two, we come out with a fairly even result. Both allow you to slow down or speed up the playback while providing HD options and section looping. Some of the older videos in JamPlay were shot in lower resolutions, but that doesn't significantly detract from the value of the content.

While it might be a little easier to stare at the Yousician interface for longer, that's due more to the interactive format.

JamPlay is one of the best programs when it comes to offering supplemental material with their lessons. To clarify, supplemental material refers to anything that's not the video lesson itself. This includes written content, images, audio files, and even things like Guitar Pro (.gpx) files that go along with particular lessons.

For most of their lessons, JamPlay provides several or all of these elements, giving you a lot of material to work with aside from just watching the video.

Yousician is extremely weak here, offering no supplemental content outside of the video game itself. This isn't necessarily grounds to be disqualified as an option, but if it's an area that matters to you, Yousician doesn't really even attempt to address it. 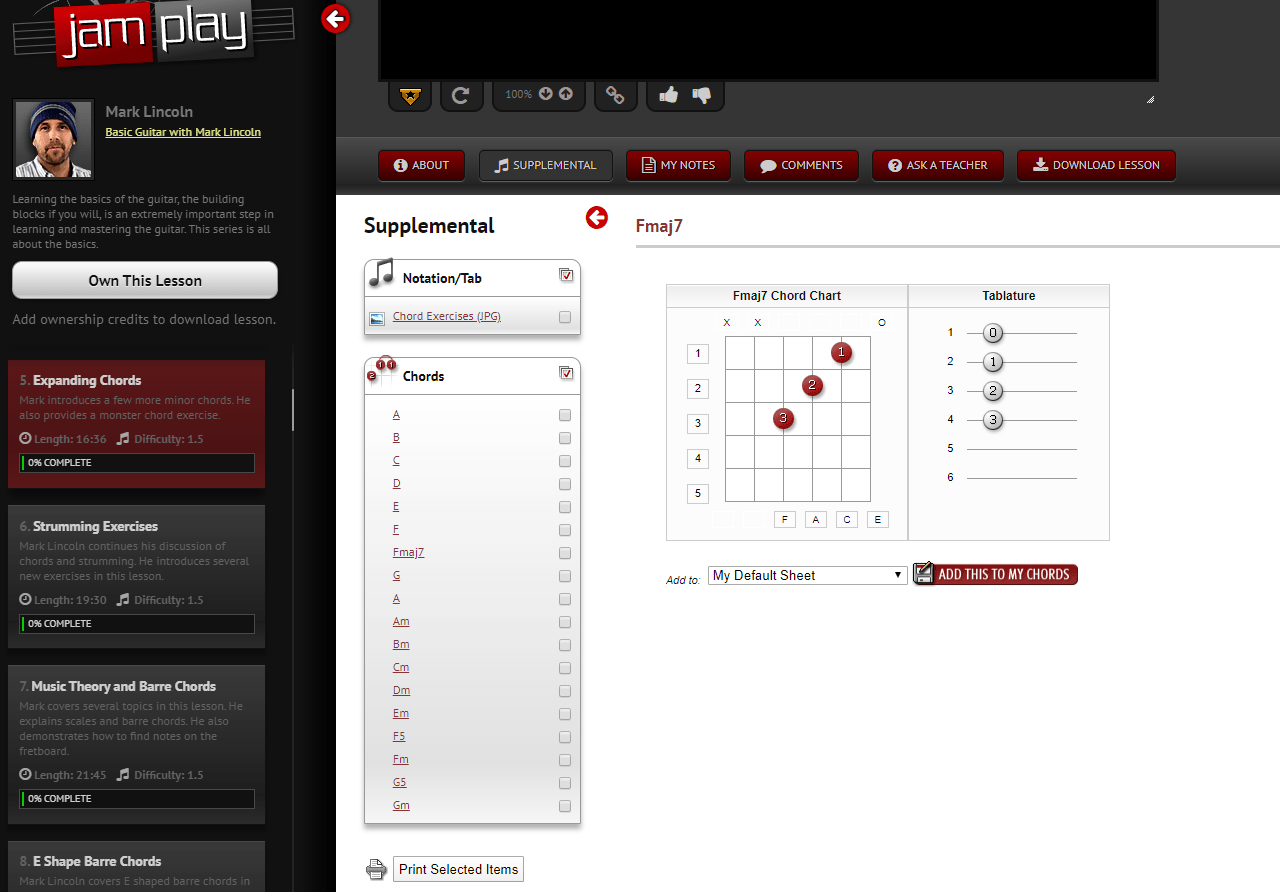 Supplemental chords and guitar tabs in a JamPlay guitar lesson. 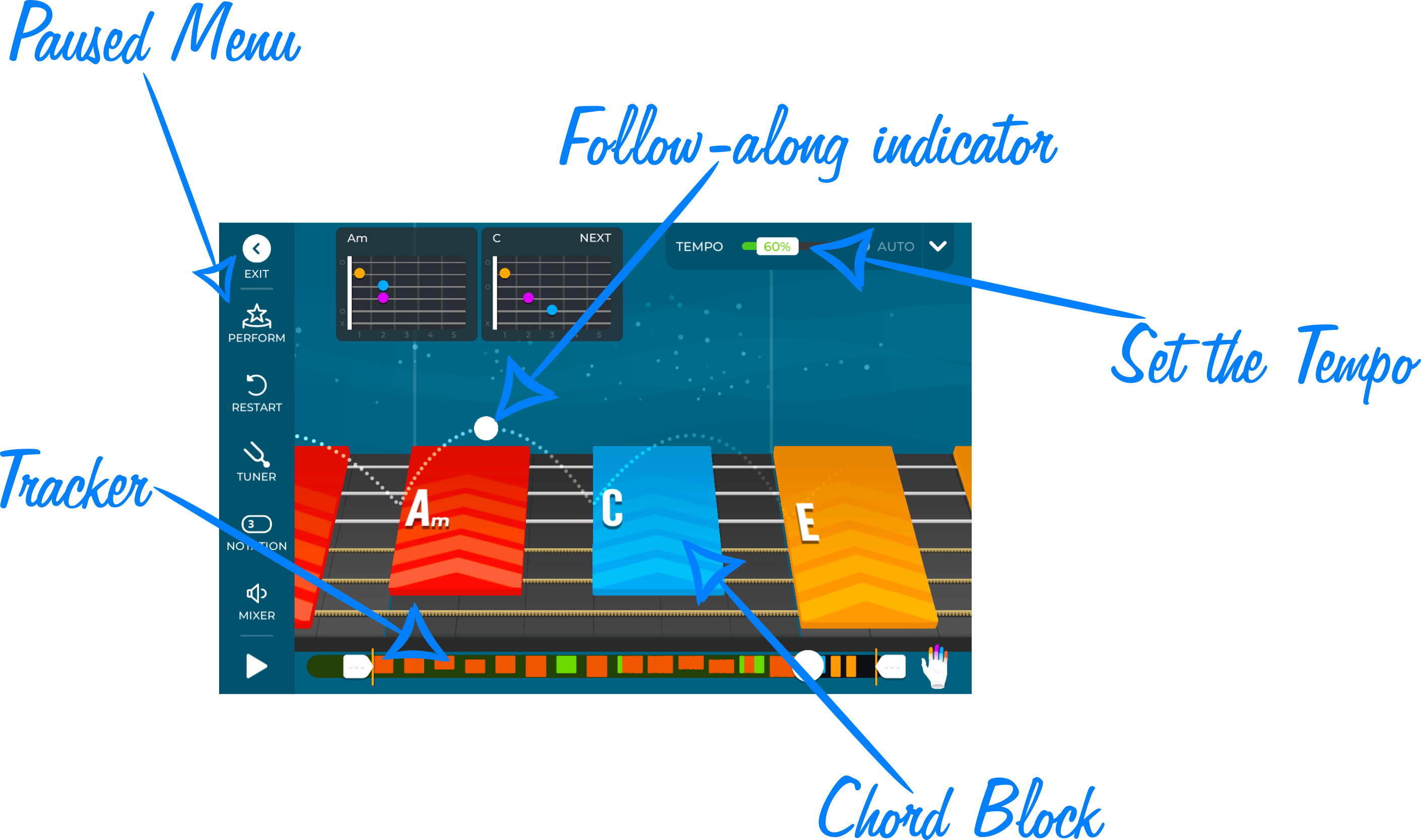 All of the elements on a Yousician chord lesson without any supplemental material.

Over the past few years JamPlay has publicly stated that they are not emphasizing song lessons, despite having amassed (at one point) over 600 of them. It's possible that during their long-winded horse race with Guitar Tricks, JamPlay has willingly conceded this territory.

Guitar Tricks has been aggressive about licensing music and presenting song lessons to the point where they now have over 1000 in their library.

And while JamPlay still has a lot of their song lessons they aren't currently adding to it, while some have even noticed that certain lessons are beginning to go missing from the site, perhaps as licensing runs out depending on the publisher.

But one advantage JamPlay has over Yousician in this particular category is that Yousician keeps their licensed music behind a second paywall, which is the more expensive $30 monthly price or the "plus" membership. Without a Plus membership, you do not have access to licensed songs.

Concluding our JamPlay VS Yousician Comparison

While the comparison between JamPlay and Yousician is imperfect, there's enough common ground for us to put the two side by side and at least see where they are different. If your decision is between the two, it ultimately comes down to how you want to learn.

Do you want to follow the video game format of Yousician, or do you want something a bit more substantive and traditional with JamPlay?

Both are good for different things, though we'd recommend JamPlay as the better of two programs in an overall head-to-head.

If you have additional questions, feel free to drop them in the comments section below and I'll be happy to jump in and help out as best I can.

How much does Yousician cost? (pricing rundown)

Written by Danielle on Lessons and Info

How much does Yousician cost? (pricing rundown)