The innovative design and pure playability of the Journey Instruments OF410 doesn't simply lean on the uniqueness of being collapsible. With or without that feature, it's a fantastic acoustic guitar.

For a few weeks now I've had the chance to play and test the Journey Instruments OF410 acoustic guitar. What is most notable about this guitar is that the neck actually detaches from the body and collapses, making it extremely easy to store and travel with. Needless to say, I was fascinated to see how this guitar would play and what kind of experience it would be to use such an instrument.

...we took our own photos of the guitar and played the OF410 for several hours before coming to a final conclusion. 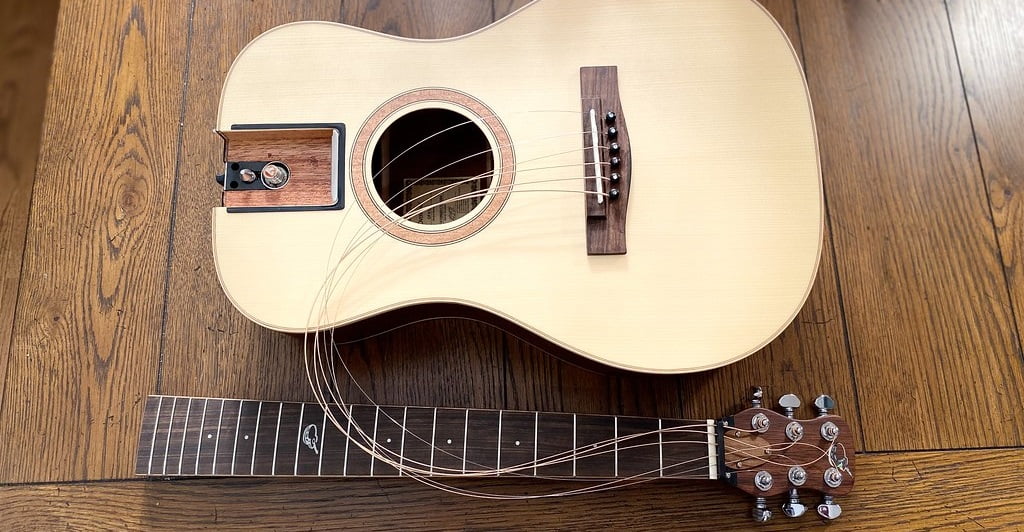 The Journey Instruments OF410 is part of a series of acoustic guitars with collapsible necks.

For this write-up we took our own photos of the guitar and played the OF410 for several hours before coming to a final conclusion about the ratings below.

For testing, we both amplified the OF410 and played it unplugged.

We did not change the strings that it came with (I believe they're Elixir). Here's what we came up with:

OF412 Pricing from Other Vendors

Pricing History (based on Sweetwater retail)

As expected from a smaller guitar cut like a concert acoustic, the natural tone of the OF410 is brighter with some bite on the higher end. It also emphasized the scraping sound of my left hand movement, though that could have been from the strings being a little cold out of the box.

Given the brighter intensity, the guitar still sounded surprisingly mellow and even warm on lower, open-voiced chord progressions.

Resonance was big and comparable to larger guitars, though I wasn't able to get a ton of sustain out of my chords. 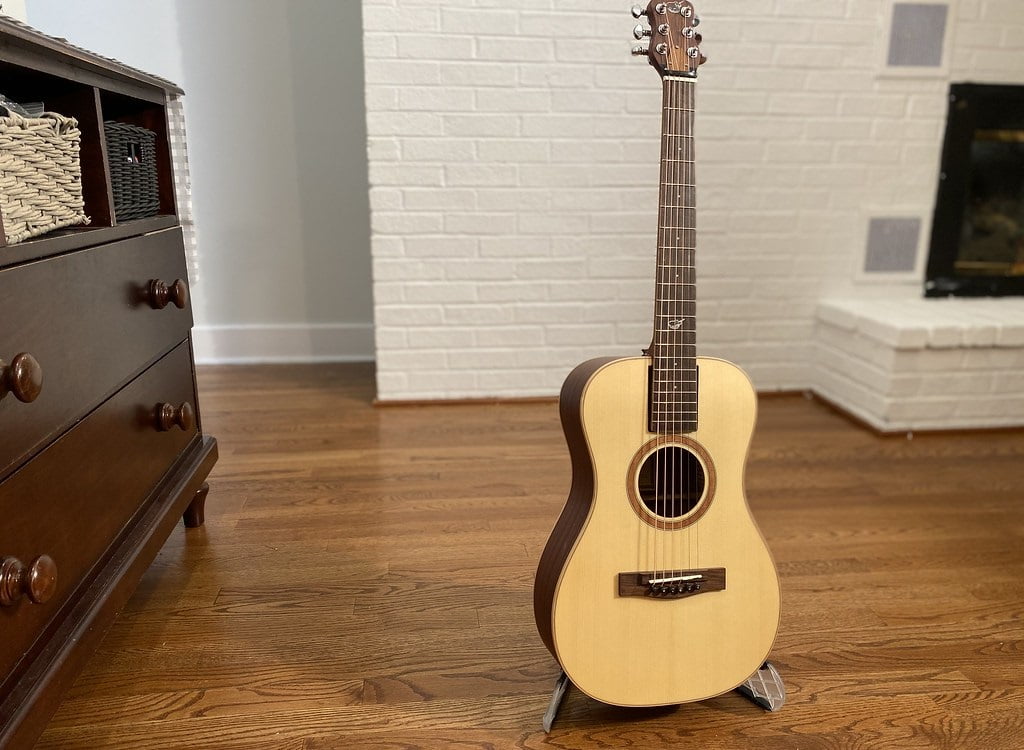 The Journey Instruments OF410 sitting upright in my dining room. 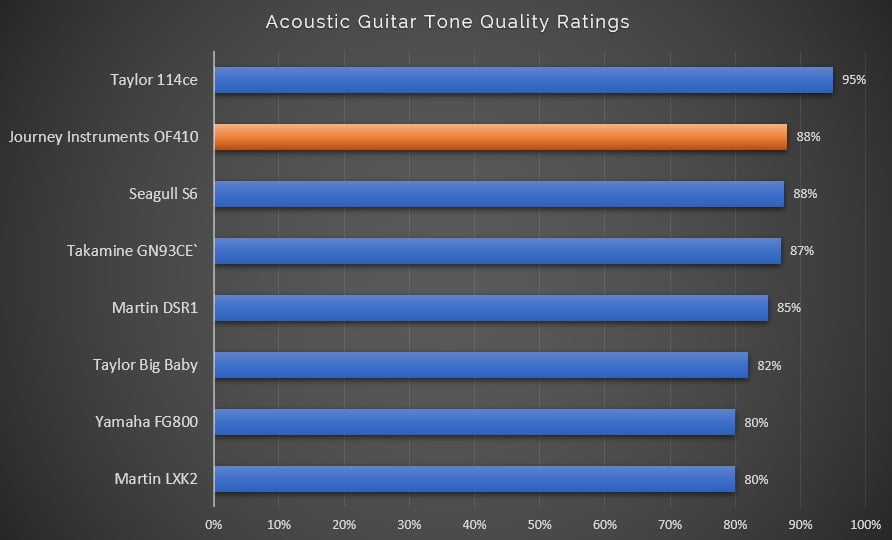 When compared to some of the other midrange acoustic guitars we've tested, the OF410 scored fairly high in the tone quality category, similar to the Seagull and Takamine models.

In the OF410, Journey Instruments uses a tonewood combination comparable to the Taylor 114ce, with a solid Sitka Spruce top and laminate Mahogany on the back and sides.

This mimics the Taylor's brighter tone profile and gives you more of a lead-friendly resonance. We also noticed that the guitar just feels extremely solid, which could be partly due to the smaller size, but this was an especially encouraging note, given the unique design. It didn't feel like it was going to break or collapse on its own.

The OF410 uses a tonewood mixture similar to the midrange Taylor acoustics with Sitka Spruce and Mahogany.

The patented design of the neck actually screws and latches into place and feels extremely solid, even when set in with just the latching mechanism. Inside you can see the tapered X bracing system, which is shifted forward a bit to accommodate the smaller body size.

What's even more remarkable about the construction is that the guitar doesn't seem to go out of tune when you detach the neck and put it back on.

Per the above photo, there's a small black brace on the guitar's headstock that holds the strings in place when you remove the neck.

Simple, but it makes the process much easier and seems to help the guitar stay in tune.

Overall, the construction and craftsmanship is this guitar's strongest suit. Did I mention it has Grover tuners? 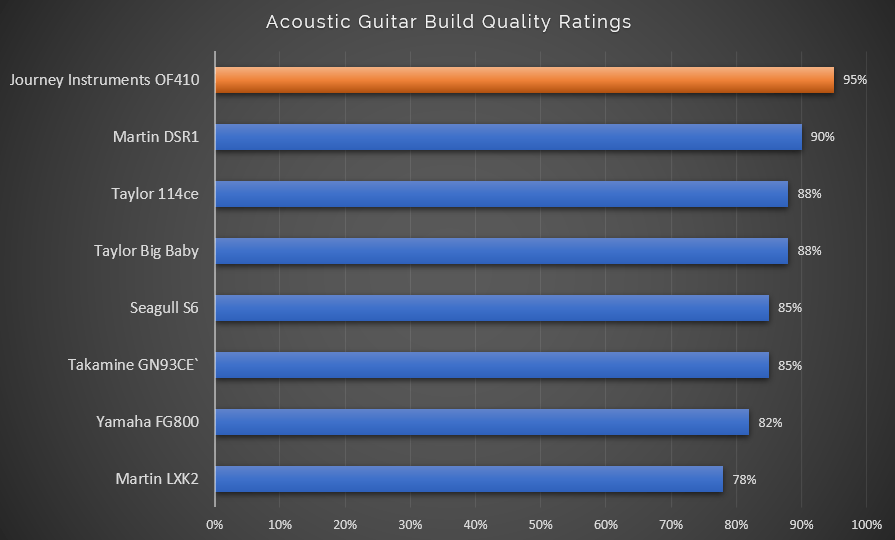 The innovation that has gone into making the neck detachable, yet keeping the OF410 a solid and playable guitar, is quite remarkable.

The JourneyTek piezo transducer is an in-house pickup system designed by Journey Instruments, and is fairly simple in its setup. We tested it with a Garageband acoustic amp model and an acoustic floor amp. We also ran it through a Boss EQ pedal and an LR Baggs Venue DI preamp.

However, we did not get a chance to test it in a PA system or mixer which we would have liked to do, just to get a feel for its performance in a larger room.

Generally though, the amplified tone was reliably comparable to the guitar's natural tone, which is all we can really ask for out of a piezo pickup system. It's certainly not a strength of the guitar, but the existing electronics get the job done and stave off additional cost which would be incurred if they were to outsource that element to a third-party (LR Baggs, Fishman, etc.). 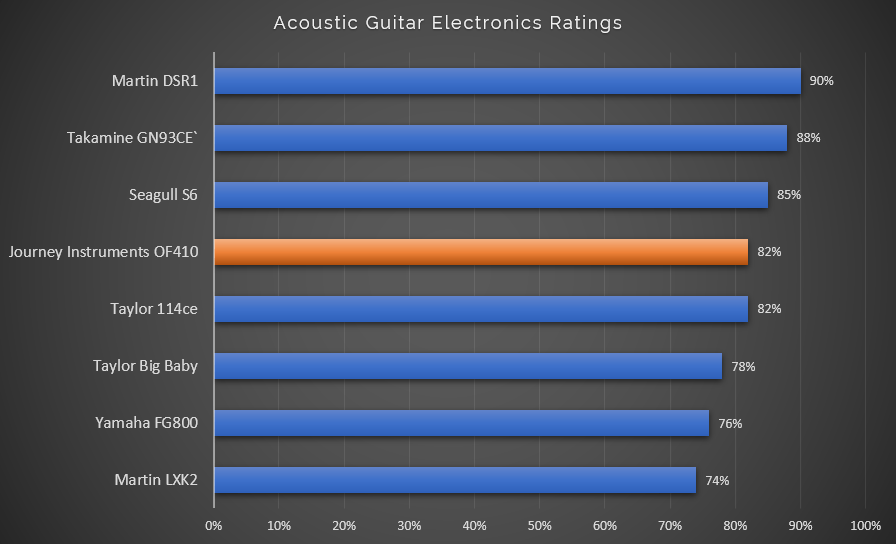 The Piezo system means you need to tweak tone from outside the guitar, which limits the final score here. Still, it sounds good on its own and faithfully represents the natural tone of the acoustic. Middle of the pack in this category.

I love how this guitar doesn't simply rest on the fact that it has a detachable neck. And don't get me wrong, it's a great feature, but this is a legitimate acoustic instrument, comparable to the midrange Taylor and Godin (Seagull) models. The OF410 retails around $600 with several in the Journey Instruments line going for a good deal higher, so we're happy with the price point compared to other acoustics in the same range. Here's how the value graph plots out: 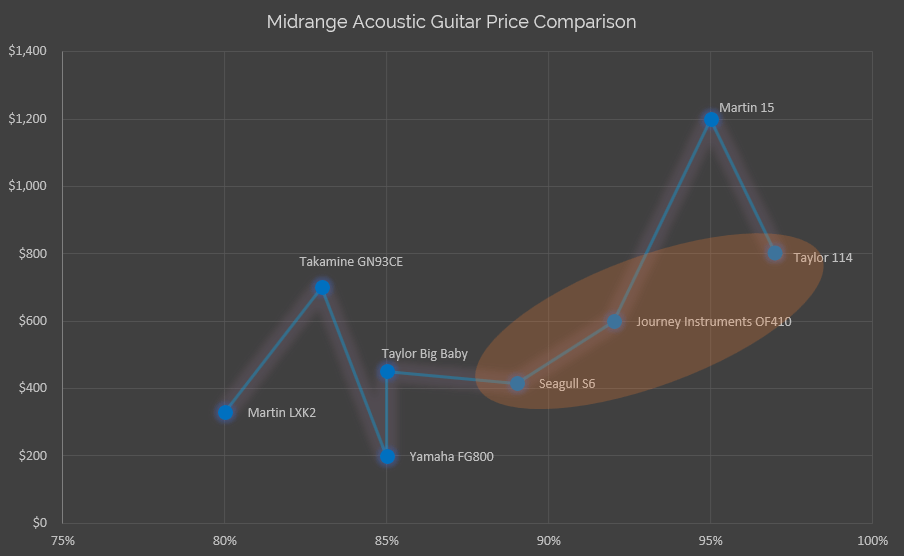 Lower and further to the right is better, which means we'd target the S6, OF410, and 114 as the highest-value acoustic guitars from this list.

Obviously the OF410 - and the entirety of the Journey Instrument series - will have a lot of appeal as a travel acoustic. Though I would argue that is has a wider range of uses, regardless of whether or not you care about the portability factor. For those wanting a smaller, concert-style acoustic guitar, I like this better than the Martin LXK2 and the Taylor BT2. As such, there aren't many situations where I wouldn't recommend it.

I want to reiterate, this review was written based on my own first-hand account, after having held and played the OF410 for multiple hours. Notes were taken, opinions were developed, and time was given to this instrument to make sure our audit was genuine and not a blind recommendation.

As such, my experience with the OF410 has been entirely positive.

Yes, it's portable and the construction is certainly Journey Instruments' strongest play.

However, the OF410 - and I would imagine most of the other acoustics in the series - are just great acoustic guitars in multiple senses. It's usable beyond what you would expect out of the traditional "travel acoustic guitar."

If I can't help, I'll get you in touch with folks at Journey Instruments who can.