Guitar Hero - fun though it might be - does not actually teach you guitar.

However, a lot of kids or even adults that start using Guitar Hero have wondered how (and if) their ability to play the game could translate to an actual guitar.

Of course, we'd heartily recommend playing an actual guitar over Guitar Hero, but are their guitar lessons like Guitar Hero that can track your notes and give you a similar game-style interface?

The answer is, yes. There are a few.

Any of these programs can be a good jumping off point from a Guitar Hero career.

We partner with Guitar Tricks, JamPlay, and TrueFire as our primary affiliates. This is because we believe these are some of the best guitar programs available, so we recommend them as a way to support this site, at no extra cost to you. Consider giving the Guitar Tricks free trial a spin, as a way to help us out and keep the free content coming.

What about the other programs?

Aside from the Amazon Associates link to Rocksmith 2014 (see our affiliate disclosure), Yousician, Rocksmith, and Amped are not Guitar Chalk affiliates, but are also well-worth your consideration. 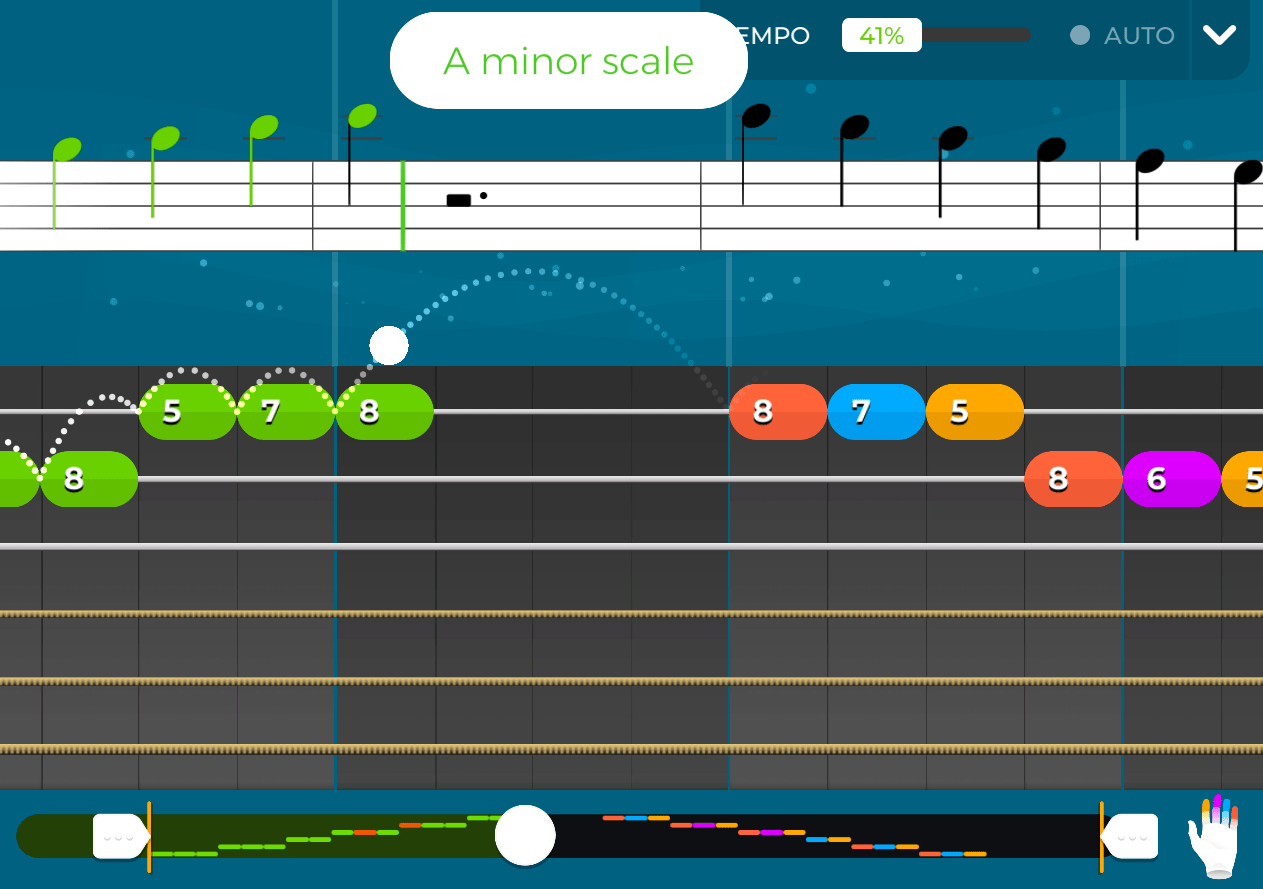 The Yousician interface listens to your guitar through a microphone (or USB connection) and tracks your notes on a video game-style interface.

While the interface looks different than Guitar Hero, Yousician functions in the exact same manner but can listen to your actual guitar, either through a microphone or through an adapter that allows you to plug in an electric guitar.

Horizontal Instead of Vertical

The Yousician game, instead of running vertical like Guitar Hero, runs horizontal going from left to right, which we actually like a lot better. It's simpler, cleaner, and easier to follow than the hectic Guitar Hero interface (and Rocksmith - but more on that later).

Yousician also provides programs for other instruments including bass, ukulele, and piano. 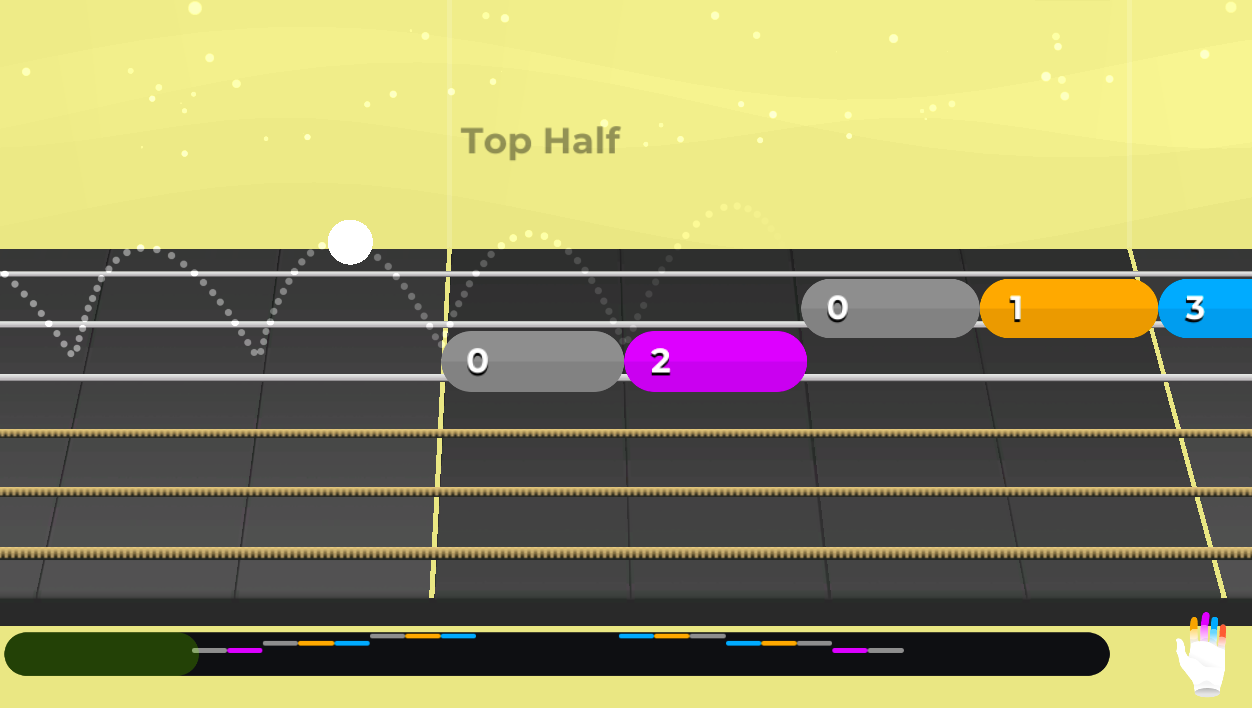 Follow the bouncing ball playing each note in a guitar tab format.

For those switching directly from Guitar Hero, there will be a bit of a learning curve associated with the horizontal fretboard display, but the game will still track each note you play and give you a grade based on accuracy. We've tested it for our Yousician review, and the program works really well. It knows when you play the right note, when you make a mistake, and when you only sort of hit the note in the right way.

It's far more of an educational experience and less of a video game.

To that end, if you want something that will get you a real experience with the guitar, this is one of your most Guitar Hero-esque options.

The next one gets even closer. 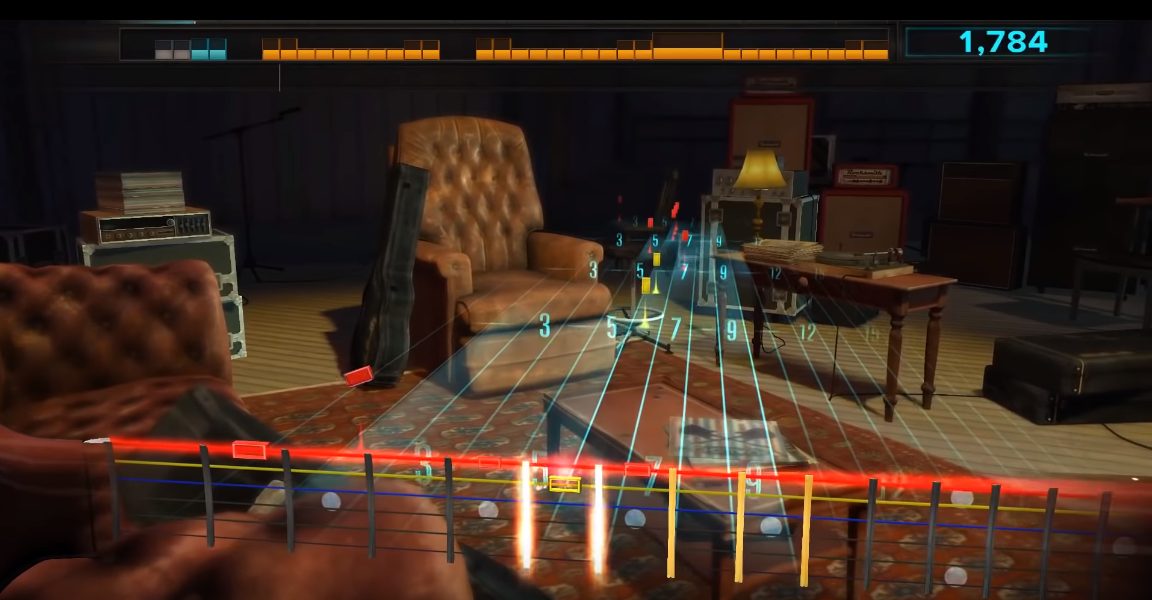 Rocksmith is a real guitar video game that most closely resembles Guitar Hero.

In terms of finding a guitar program that is most similarly structured to Guitar Hero, Rocksmith is probably your closest alternative. As I mentioned above regarding Yousician, Rocksmith keeps the vertical interface you're used to with Guitar Hero and employs a similar game-style movement that tracks your notes.

Yet, Rocksmith works with an actual guitar that you plug into your PlayStation, XBOX, or PC with an included cable.

The system responds well to your playing and effectively grades you based on your accuracy, though the emphasis with Rocksmith is a bit more on the "gaming" side than the educational side. Can Rocksmith still teach you guitar? In a lot of ways, I would say no. It doesn't teach you as much as it just helps you practice.

However, if you're looking for a Guitar Hero alternative that is most like Guitar Hero, Rocksmith is your top option.

It has courses you can go through but largely hinges on showing you how to play songs, many of which are only available through in-app purchases.

Amped is similar to Yousician but more narrowly focused on guitar with some good add-ons.

Amped Guitar Learning is an app available for iOS only (iPad and iPhone) that functions similar to Yousician in that it tells you what to play in a horizontal guitar tab and then listens to your guitar. The twist is that Amped uses something called audio augmented reality that basically makes your guitar sound significantly different (and usually better) coming from your headphones.

This means that headphones are an important part of the app's experience.

This is one of the major advantages that Amped has over Yousician, especially if you're off-put by the larger-scale commercialization of Yousician's platform. For those that are exclusively interested in a mobile or tablet solution, we'd say Amped is one of your best options. 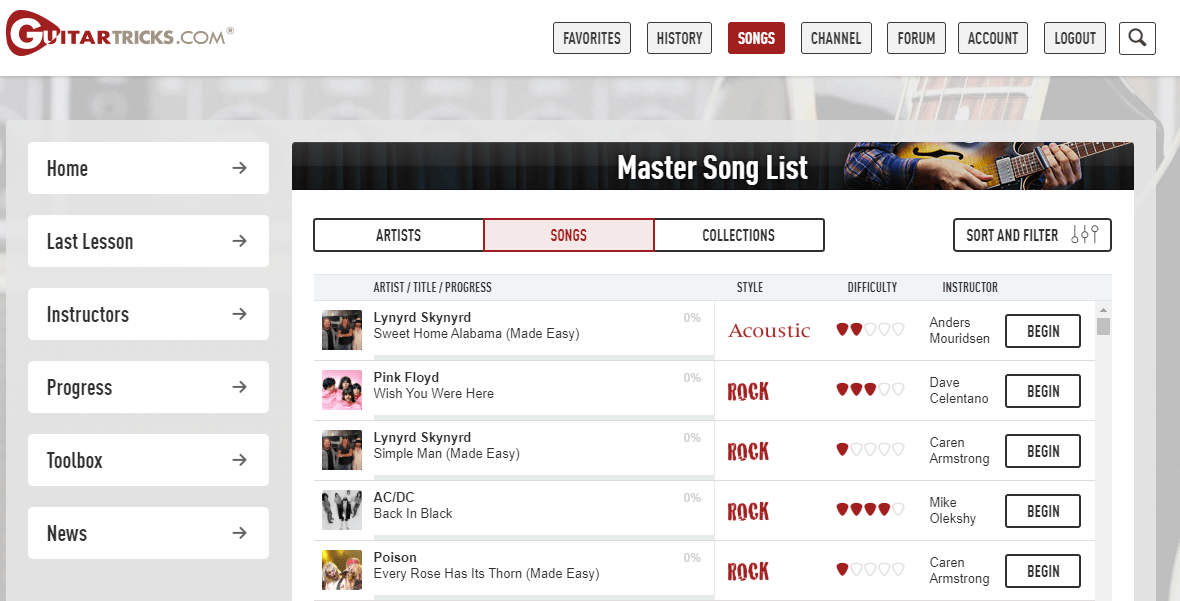 Guitar Tricks has a massive amount of song lessons.

While Guitar Tricks is not formatted in the same way as the Guitar Hero game - like Yousician and Amped - it does have the largest, licensed song lesson section in existence. Since Guitar Hero is almost entirely centered around playing songs, we'd recommend Guitar Tricks as a great alternative because you can be taught a massive number of songs (over 1,000) by professional instructors in HD videos.

You can access a free trial here if you want to check it out.

The songs are broken up into smaller, easy to digest pieces, while each nuance and note (including solos) is explained in detail.

Again, you don't get the same video game-style interface, but the material is presented in more of a classic tutorial format. They also have over 11,000 total lessons and are consistently adding new content.

If you're serious about moving from Guitar Hero to a real guitar, the Guitar Tricks program is one of the best online guitar resources you could partner up with.

The success of Guitar Hero has given way to a handful of alternatives that either teach you popular songs or mimic the interface and style of Guitar Hero. Of the four we've listed, Guitar Tricks is probably the biggest diversion from what you experience with Guitar Hero but also the most educational.

By contract, Rocksmith is the closest to Guitar Hero from a style and functionality perspective, giving you an interface that looks oddly similar to Guitar Hero games of past years.

Moving from Guitar Hero to a real guitar will require you figure out how far from the video game interface you're willing to stray.

Because as good as programs like Yousician, Rocksmith, and Amped are, we'd view them as supplemental and not full-tilt guitar lesson programs. Using them in conjunction with a real teacher or with a full program like Guitar Tricks is your best option for learning and getting better at guitar.

Either way, we totally support your decision to put down the Guitar Hero controller.

Do you have questions about the resources recommended in this article? Maybe you've used them and have an experience to share?

If so, leave it in the comments section below.

Would love to help out as best I can, or just chat and share stories.

Good luck out there.

Is Rocksmith good for learning guitar? A Teacher’s Opinion

Written by Bobby on Lessons and Info

Is Rocksmith good for learning guitar? A Teacher’s Opinion