Since the PRS SE Custom 24 is already a versatile guitar, we'd recommend adding the active Fishman Fluence Modern humbuckers which are equally versatile. You get the clarity and subtlty of single coil tones along with the punch and smoothness of active tones.

Browse the Fluence on  Sweetwater

We're making suggestions for people who are considering a pickup upgrade for their PRS SE Custom 24. Since this is an incredibly decent guitar for the price, it's a good candidate for a pickup upgrade, as the included humbucker set is of the cheaper PRS stock variety.

They sound okay but the SE Custom 24 can sound much better with a nicer set of pickups from a third party.

We'll start by listing our recommendations - which are based on actual use and testing - then follow up with some additional information and consideration for making the full pickup swap.

If you have questions along the way, feel free to jump in via the comments section at the end of this article. 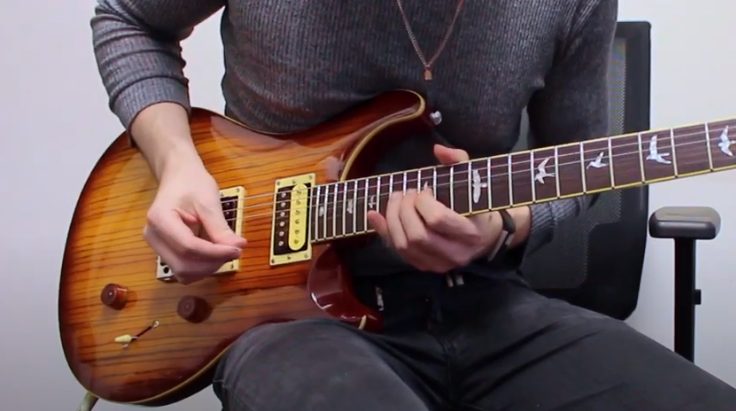 The cheap stock pickups on the PRS SE Custom 24 make it a great "upgrade guitar."

We've chosen five humbucker sets that we think are good fits for the PRS SE Custom 24. These sets all come with a humbucker for the bridge and neck, which will fit the SE Custom 24's pickup configuration. Use the compare buttons to browse pricing and audio samples.

For those wanting more information or help selecting pickups for their SE Custom 24, continue on to the paragraphs below which deal with several specific questions surrounding this topic.

Table of Contents (click to jump)
Best Pickup Replacements for a PRS SE Custom 24
Our Process
Which is better: Active or passive?
Response to Distorted and Clean Tones
What pickups come with the PRS SE Custom 24?
Which humbucker replacement set is the best?
Installation Help
What if I already like the stock pickups on the SE?
Additional Questions

How exactly do we choose a pickup upgrade for a specific guitar?

In my situation, I've actually owned the PRS SE Custom 24 electric guitar and have used/tested all of the pickups in this list.

This means that I have first-hand experience with what's mentioned here and I'm not just making blind suggestions. We can also make some judgements based on intended style and market for certain pickup sets. For example, a lot of pickups are designed specifically for blues and jazz, which we've sort of avoided for the SE Custom 24.

Because the SE Custom 24 is more of a heavy, modern rock guitar that should have pickups that compliment that style lean.

This leads us toward the following types of pickups:

All of these factors help inform the pickups we recommend for the SE Custom 24. Since PRS guitars naturally have a thicker and more percussive tone, we want to pair it with humbuckers that will help compliment that tendency.

Which is better: Active or passive?

Are you better off going with active or passive humbuckers?

Since active pickups need a power source, the most common configuration is a 9V battery attached to the pickups.

They also tend to sound better with heavy distortion, producing a warm and smooth tone that is distinctly different from passive pickups.

While one is not necessarily better than the other, I really like active pickups for the SE Custom 24 since it's already built for heavier playing styles and smoother tone profiles.

Read more: What's the difference between active and passive pickups?

Response to Distorted and Clean Tones

Another factor to consider is how a set of pickups responds to both distorted and clean tones.

Can it handle high levels of gain?

Does it sound good with a clean/basic EQ?

Since I've known the PRS SE Custom 24 to be a good distortion guitar, I wanted to target pickups that could also handle heavier levels of distortion. At the same time, your pickups should be able to produce a high-quality clean tone.

This is why the active pickups seemed like such a good fit. They tend to be quite good on both sides of the clean/dirty fence.

Additionally, the Fishman Fluence pickups are exceptionally good when it comes to balancing distortion and cleans, which is why we've included two different sets in this list.

What pickups come with the PRS SE Custom 24?

It's important to note that the pickups that come in the SE versions of PRS guitars are not the same as the pickups in the US versions, despite the naming conventions being similar.

Here's the entry and description for the PRS SE Custom 24 pickups on Sweetwater:

These pickups, despite being made by PRS and named similarly, are not the same ones you get in the $3000 and $4000 PRS models. While this might be a bit disappointing, it should come as no surprise.

And I want people to be clear on the fact that there is a difference, because the naming convention is deceptively similar, to say the least.

These pickups are a cheaper stock that PRS either makes in-house, or contracts out to their factory in South Korea while maintaining the rights to keep their name on them.

Either way, we don't love them, and can see why they're often subject to pickup swaps.

Which humbucker replacement set is the best?

Of the humbuckers listed, my personal favorite is the Fishman Fluence Modern set, especially if we're talking specifically for the PRS SE Custom 24. These multi-voice humbuckers are some of the absolute best when it comes to producing a great sound in both high and low-gain environments and they pair really well with the SE Custom 24.

Many guitar players describe them as bringing a lot of the qualities of both passive and active pickups into a single humbucker set.

For a lot of guitar upgrades, I'm a big fan of the Fishman Fluence series.

The way you install pickups into your SE Custom 24 will depend a lot on which pickup set you decide to get. Active pickups are installed differently since they require a 9V battery as a power source, though they'll usually have their own instructions included.

Here's how you'd likely wire up a set of active humbuckers: 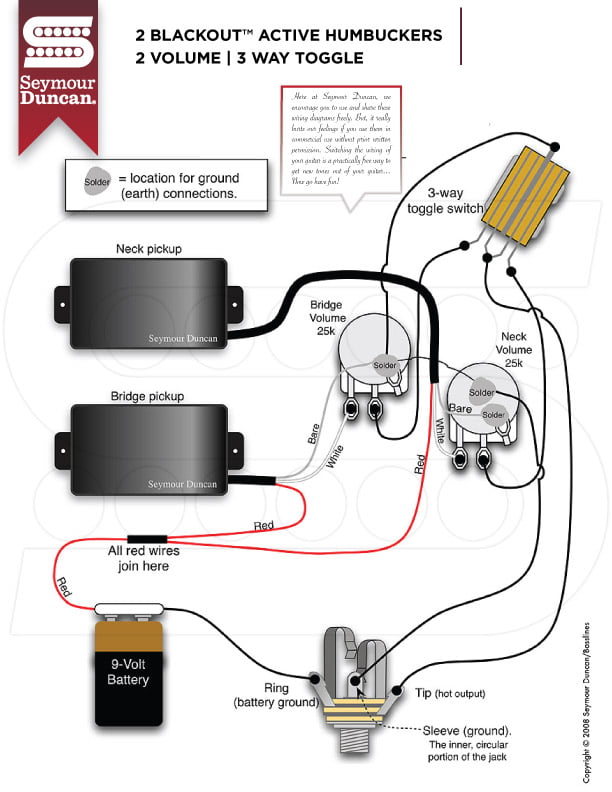 If you're working with a passive humbucker set, you'll use the following wiring diagram, which I also pulled from the Seymour Duncan database: 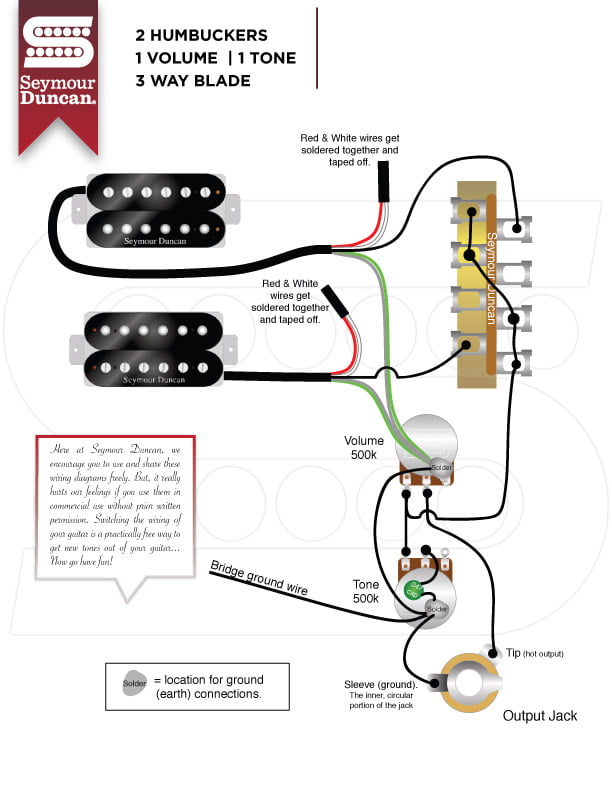 If you want to browse more wiring diagrams, Seymour Duncan has a ton of them.

What about a soldering gun?

In most cases you will need a soldering gun to do your own pickup swap, though it's not as scary as it looks. If you really aren't comfortable doing that kind of work, you can also take your guitar to a local shop and pay to have it done by a tech.

What if I already like the stock pickups on the SE?

Some people are happy with the tone they get from the SE Custom 24 straight out of the box, and there's certainly nothing wrong with leaving it that way.

However, I'd also say there's a lot of tone quality to be gained by investing in this guitar and taking time to do the pickup swap. My best advice is to try the guitar as-is for awhile, then maybe upgrade the pickups after you've had time to get a feel for its default sound.

That way, you'll be able to hear the upgrade in tone more so than if you change the pickups right away, before playing the guitar.

For PRS SE Custom 24 owners, that's all the best advice I have for doing a pickup upgrade.

If you have additional questions, or if I've missed something, feel free to send me a note via the comments section below. That's a good place to continue the conversation, and add content that might be helpful to future readers.

We'll talk to you then.