What is the most popular Overdrive Pedal?

While new overdrive pedals can initially sell at a high volume, the most consistently popular overdrive pedal is the Ibanez TS9 Tube Screamer, which has been around for years. We regularly see it in the highest-selling ranks across multiple retailers.

What are the most popular overdrive pedals on the market?

These aren't necessarily the best or the highest value, but simply the ones that companies like Sweetwater and Musician's Friend sell the most of. As a result, they tend to be plentiful on the used market as well.

We'll use data from several retailers to list five overdrive pedals (not to be confused with fuzz or distortion), that are the best-selling options in existence.

If you have questions, jump to the comments section below and we'll help out.

We're reader supported through partnerships with Sweetwater and other great retailers we trust, and use ourselves. If you buy through our links, we might receive a commission at no extra cost to you. Also, this article does not contain recommendations or reviews. Rather it's a curation of best-selling overdrive pedals based on data.

These five overdrive pedals have stood the test of time and been the best-selling within their category for years (decades in some cases). We'll address newer pedals that "pop" on the sales sheet but then gradually recede over time. Use the compare buttons to look at pricing and additional specs.

While the Boss DS-1 is called a distortion pedal, we'd argue it's more properly categorized as an overdrive. It has a smoother response than a high-gain distortion pedal, and a less edgy tone that's far more blues than it is rock.

Table of Contents (click to jump)
The Ibanez TS9 Tube Screamer
5 Most Popular Overdrive Pedals
Isn't the Boss DS-1 a "distortion" pedal?
Honorable Mentions
Other Versions of the Boss SD-1
New pedals that sell a lot in a short period of time
Most Popular Brands Overall
Which overdrive is the best option? (opinion)
Conclusion

Since we limited our list to five, here are a few additional overdrive pedals that have been very popular over the years.

Other Versions of the Boss SD-1

There are a couple other versions of the SD-1 that have been released. Of the two, the Waza Craft edition is more widely known and popular. Currently, they both sell better than the original SD-1, but over the years, the SD-1 - simply because of time in the market - has been far more popular.

You might have overdrive pedals that are more popular for a brief period of time when they are first released.

This is true of other types of guitar pedals as well.

When I'm looking for the most popular overdrive pedals, I'm also taking into account the longevity of each effect. How long have they been able to stay on the market and maintain high sales numbers? 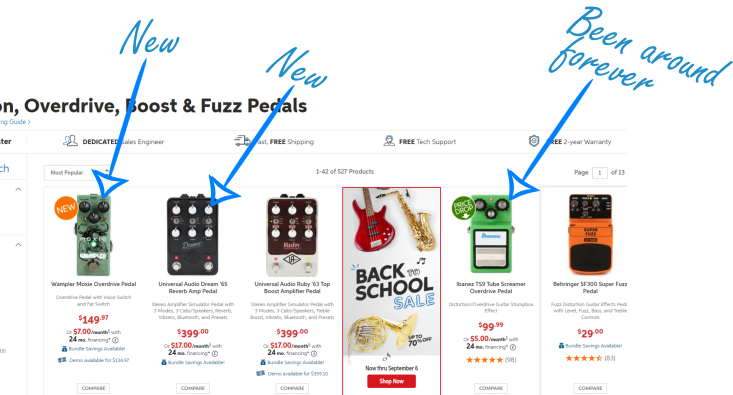 Newer pedals might be high on the sales chart, but will drop quickly after their initial release. Long-standing favorites, like the TS9, are consistently near the top.

In other words, newer pedals need to earn their keep before they can compete with the longstanding favorites.

Boss is easily the most popular brand when it comes to overdrive pedals (they have a ton of them). Other brands are smaller and more boutique, like Pro Co (really only known for the RAT series), and JHS. The Fulltone brand has also gotten a ton of mileage off just the OCD overdrive.

Which overdrive is the best option? (opinion)

Of this list, we'd actually recommend going into the honorable mentions section and picking up the Fulltone OCD or the SD-1 Waza Craft. Just because an overdrive pedal is high on the sales sheet, doesn't necessarily mean it's the best option for your situation.

It's often true that a lower price does more to drive sales than actual quality.

The best-selling overdrive pedals will eb and flow. But the five we've highlighted here have stayed the course and consistently been in the best-selling lists across multiple retailers.

The same goes for our honorable mentions section.

We'll do our best to update this page if and when the market changes.

If you have a pedal suggestion or a story to share about overdrive pedals, drop it in the comments section below and we'll chat about it.