Digital emulation pedals have gotten increasingly better at replicating analog tones, and the Dream '65 is no exception. Though its value is in consolidation, giving you amp, cab, and footswitch controls all in one box with plenty of flexibility. Folks trying to consolidate a physical tube amp rig and cab setup will get the most value.

Modeled after arguably the classic American guitar amplifier, this pedal does a great job of replicating the unmistakable tone of the Fender ’65 Deluxe Reverb combo amp.

Spring reverb, vibrato, tremolo, overdrive – they’re all here, and excellently reproduced. Yet this pedal goes above and beyond, offering an a range of tones, with cab emulations, mic emulators, and amp mods.

In this review, we’ll give our first-hand take on this highly versatile pedal.

Please note that all of the content on Guitar Chalk is opinion, complete lunacy, and probably wrong. As such, take what we have to say with a grain of salt, especially if you decide to hit up the comments section.

In this section we've added a couple similar electric guitar preamps for comparing to the Dream '65.

Use the compare buttons for more details and consider using our Sweetwater links if you do decide to buy gear. These links help support our site at no extra cost to you.

Thanks for reading and trusting us. 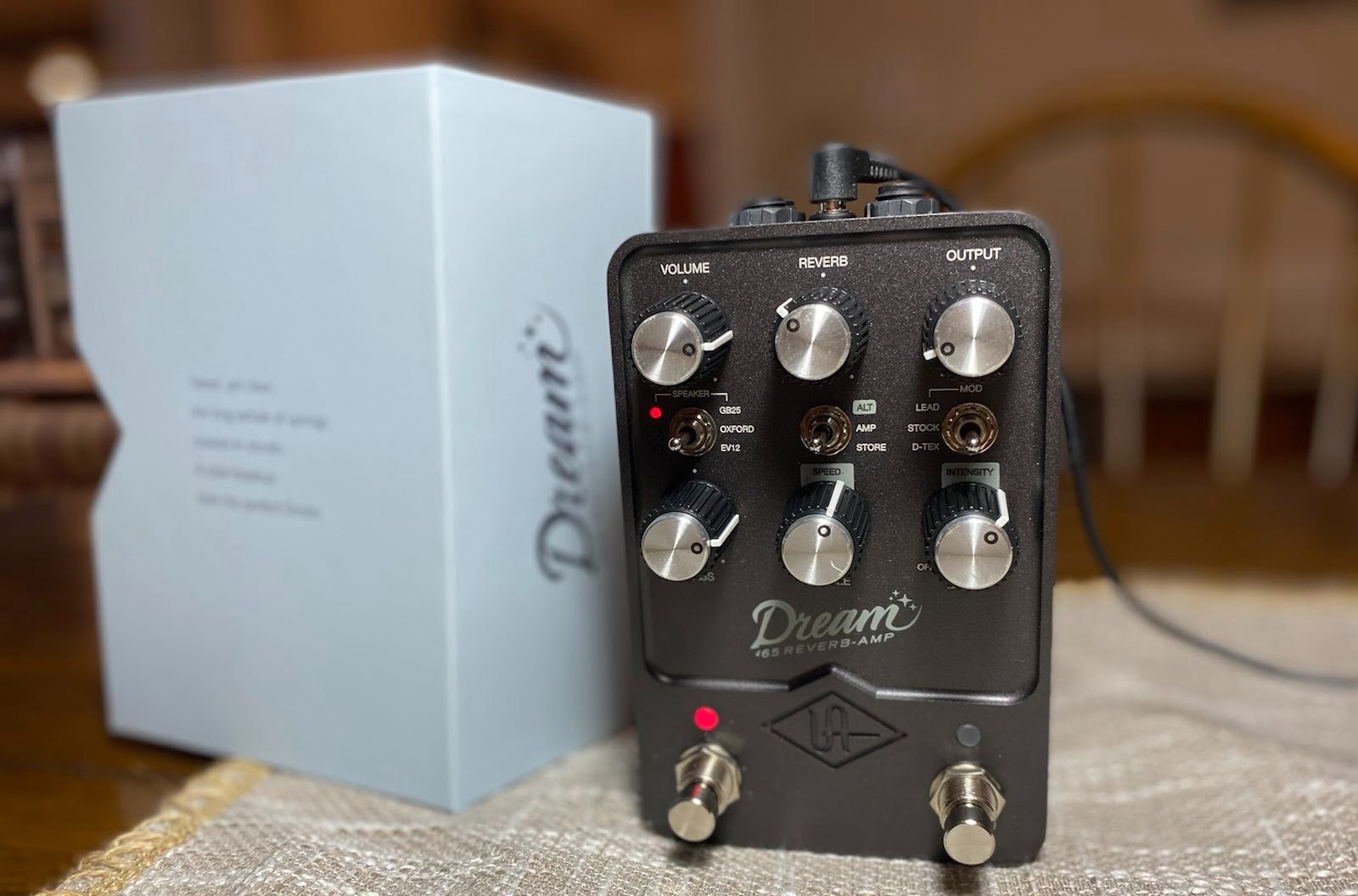 The Universal Audio Dream '65 is a reverb amp modeler with digital algorithms and presets.

We also have additional pricing info and tools in the tables below.

The Dream ’65 offers a rich variety of tones, flawlessly emulating the classic sparkling cleans of the original Fender Deluxe amplifier. And, like the original, adjustments to the volume input level (preamp) produce dynamic results, especially as the pedal eases into overdrive and subtle breakup.

While all of this is modeled digitally (based on an algorithm), the technology has come so far that it’s difficult to distinguish this pedal from the original amp, especially on a recording.

The Dream ‘65’s mod settings allow for some dynamic and powerful overdrive sounds, both for leads and rhythm. The three available mods are:

I’ll cover some detail about each one.

The classic 65’ Reverb Deluxe amp tone. Use the Boost knob to add up to 10db of clean gain, great for clean tones that are brighter and more defined. This is also ideal for high register pick attack and general emphasis on right-hand movement.

The name is a bit deceptive as this mod actually removes the bright cap, giving a warmer, ‘80s style sound when the Boost is low. Adding Boost gives more midrange for a great ‘lead boost’ which is where the lead-style lean of this mod comes into play.

This ‘SRV’ mod is great for that Texas-style blues sound, replicating SRV-style soft compression when the Boost is low. This mod offers a lot more gain and a nice open midrange when you crank up the Boost. 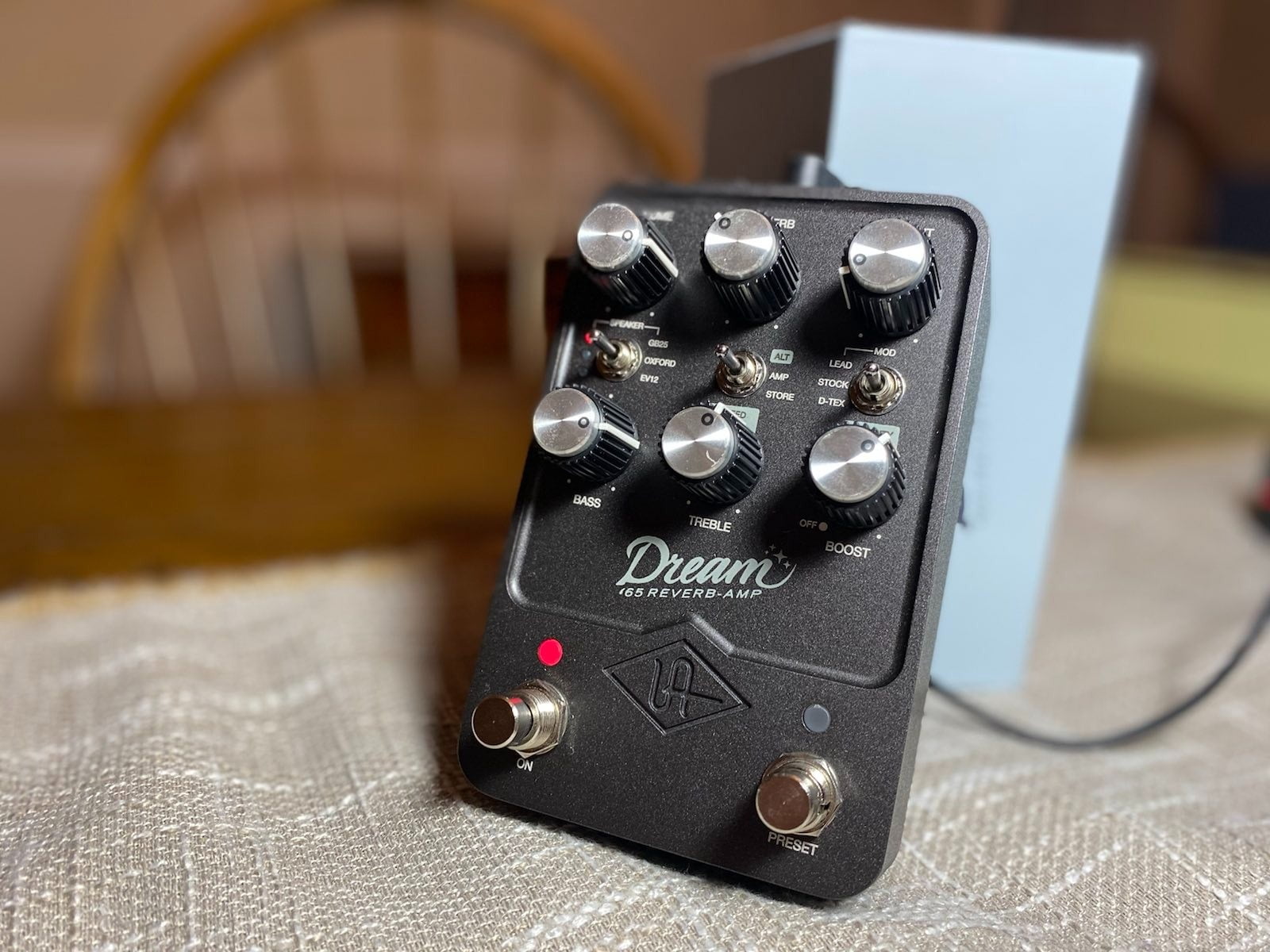 The distorted tones of the Dream '65 provide a surprisingly wide range of gain levels.

The inbuilt spring reverb is a fantastic recreation of the classic ’65 Deluxe reverb sound, and uses the same spring reverb tank as Universal Audio’s Golden Reverb pedal. Using this sound in combination with the pedal’s various mods gives you a lot of flexibility and room to maneuver.

What’s more, the various speaker cabinet and microphone emulators can provide even more space to experiment, which is – of course – something you can’t do as easily with a physical amplifier.

I find that speakers and microphone emulations tend to be generally less satisfying, and more difficult to emulate digitally.

They give you the ability to further customize your tone, but the differences are fairly subtle. Plus you have the added factor of possibly using actual speaker cabs and microphones, that already have a sound all their own. I found that for the most part, I left the speaker emulation on Oxford.

When you register your pedal with Universal Audio, you get three additional speaker cab options:

If you’re using the pedal with a ‘real’ external amp or cabinet, you might have to do some tinkering to make sure you don’t just overrun your amp’s natural tone.

Testing the Dream ’65 I used a Mesa Rectoverb, and left the reverb entirely off most of the time. I made EQ tweaks from the pedal, and left the Mesa EQ at a softened setting with higher bass and mids/treble set at 12 o’clock. It’s a bit disappointing that the Dream ’65 doesn’t have a balanced output like an XLR connection, which would make it easy to effectively use the ’65 as your only amplification source.

But it’s certainly not a problem to use your amp and just set let the Dream ’65 do the heavy lifting. Another alternative is to use a DI box. The stereo output would also allow you to do both (one side to an external amp and one to a DI box).

As I’ve mentioned, this is a highly flexible and versatile pedal, with enough tones and options for just about any guitarist out there. And as I’ve already mentioned, mods and cabinet ambiences with a real amp would require replacing speakers and microphones. In the Dream ’65, this be achieved at the flick of a button.

You certainly have some limitations when emulating these external elements, but the Dream ’65 comes close, even if you ignore the cost savings and benefits of consolidating all the gear required to setup an amp, cab, and microphone. 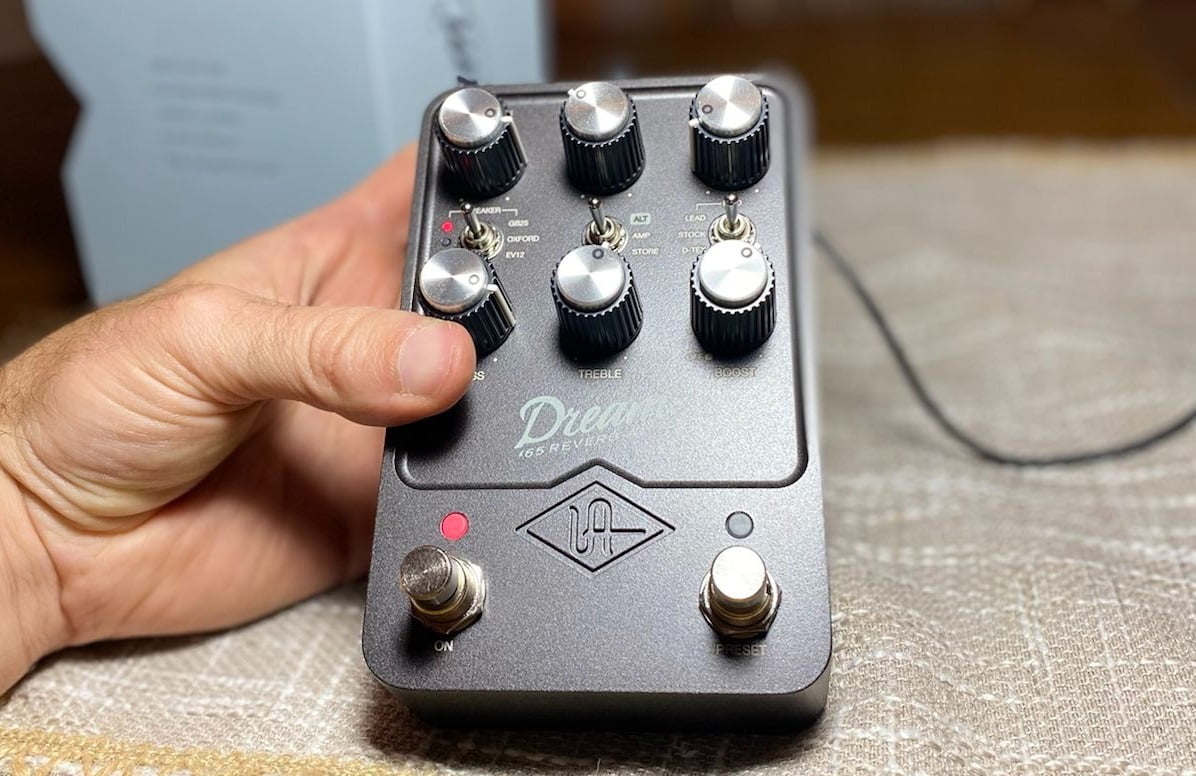 The Dream '65 provides most of the control that you would want on a physical combo amp.

The number of controls is pretty straightforward, with six knobs and two footswitches allowing you to access everything the pedal can do. This keeps the pedal intuitive and easy to use after initial orientation. Dual engine processing allows you to craft your own custom setups, and you can store your own presets at the touch of a button. As if that wasn’t enough you can connect the pedal to the UAFX app via Bluetooth, which allows you to manage even more presets, and re-configure the control scheme.

Note that when testing the pedal we did not experiment with the Bluetooth connection or make any attempt to reconfigure the controls.

As I alluded to earlier, it also offers various signal routing options: Mono-in, stereo-in, or mono-in and stereo-out, and the input and output can accept both line and mic levels, meaning the pedal can be used not only with guitars but as an outboard studio effect too.

How it Compares to Cheaper Preamp Pedals

If you’re looking to spend less and are after a thicker, modern gain sound, there are a couple options that are cheaper than the Dream ’65, like the Revv G4 and the Xotic BB. Both of these preamps offer a decent range of distortion and clean tones, but they don’t have the same versatility or clean tone options as the Dream ’65.

They also don’t really specialize in a particular type of amplifier like the Dream ’65.

Though if you want to spend less than $400 retail, they’re certainly worth looking into.

Obviously one of the main things to consider when evaluating the value of an amp emulation pedal is:

Does it do justice to the original amp on which it is modeled?

As I mentioned, the technology is so strong that the tones of the pedal and the original amp are decently close to one another.

But another, perhaps more important, feature of the Dream ’65 is that it consolidates so much functionality into one spot. Footswitch controls, presets, preamp, vintage effects, amp controls, and cabinets are all sort of smashed into one pedal. And while you do sacrifice some “purity” of a full setup, you gain a lot of flexibility at a far lower price tag, if you’re comparing to what it would cost you for a physical amp, footswitch, and speaker cab.

You're talking thousands of dollars compared to $400. 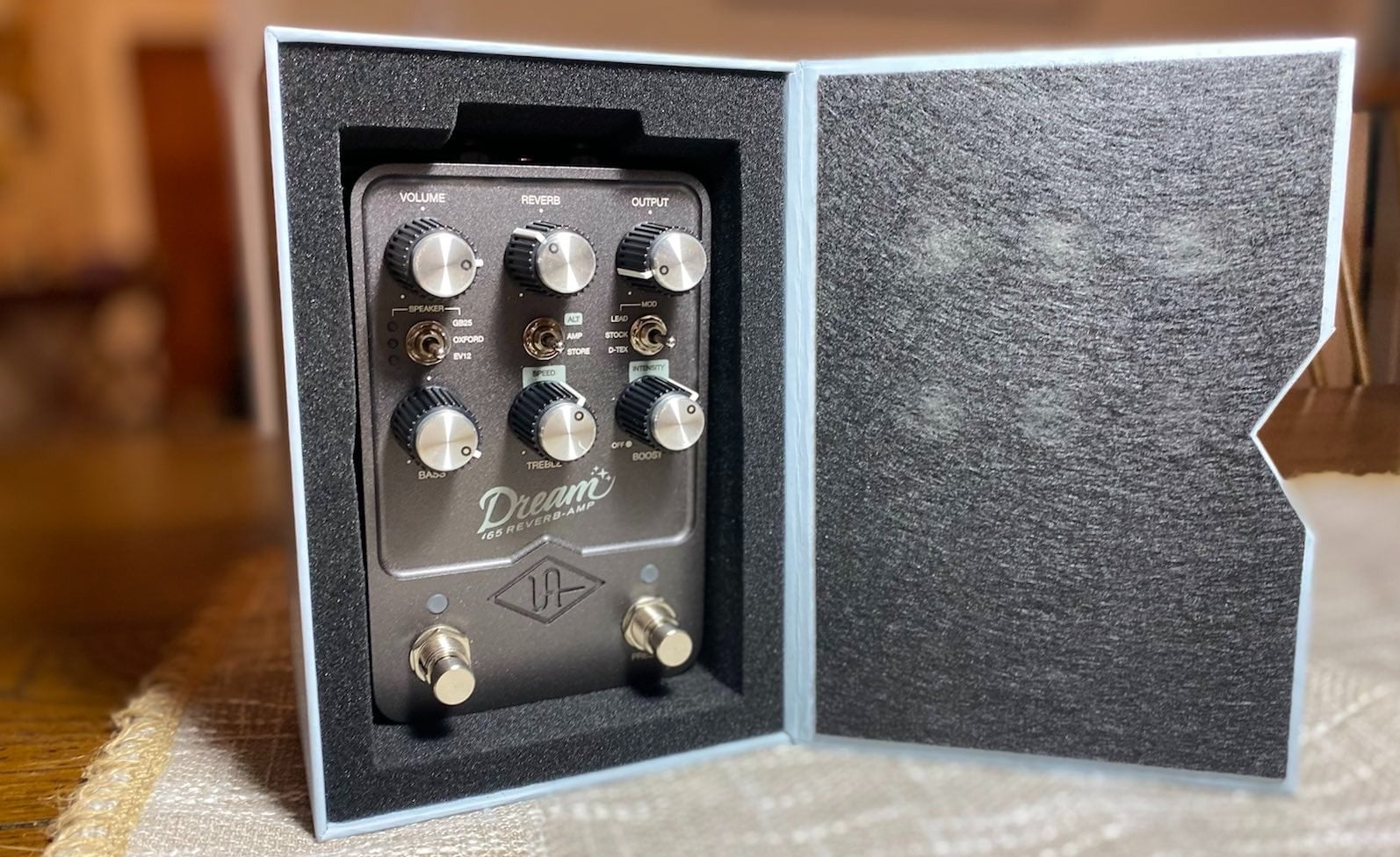 Most of the value comes from being able to consolidate such a wide range of functionality into one box. It's certainly cheaper than buying the physical amps and cabs.

To that end, is it worth the investment?

We'd argue yes, in most cases.

When you consider this pedal costs $399 and a Fender ‘65 Deluxe Reverb amp today costs around $1600, you’re seeing great value for what you pay.

The Dream ’65 Reverb amp pedal is arguably even more versatile than the classic amplifier that it emulates. If your priority is flexibility and consolidation, the Dream ’65 is going to get the job done and could potentially be a major rig upgrade if you’re running a cheaper amp.

From a style perspective, it's suitable for playing classic rock, blues, country, and jazz, same as the original '65 combo.

This is definitely one of the most powerful preamp pedals we’ve tested, which succeeds not only in replicating the classic amp on which it’s based, but offers a huge range of versatile options for just about any style.

If you have questions about the Universal Audio Dream ’65, or you have a perspective on the pedal you’d like to share, drop it in the comments section below.

Matthew, a guitar player and music producer, has a Master's Degree in Intercultural Communication from the University of Manchester, UK. He has also produced electronic music under the moniker Hermanito

Matthew, a guitar player and music producer, has a Master’s Degree in Intercultural Communication from the University of Manchester, UK. He has also produced electronic music under the moniker Hermanito