I've always said that when you're looking at a $2000 guitar there are specific and meaningful reasons why that guitar isn't being sold for $200. It's also almost always true that the $2000 guitar is not in any way the same or similar in quality to the $200 guitar.

For example, I often hear this argument about Squiers and Fenders: "I can't tell the difference between a Squier and Fender guitar. They're basically the same thing."

This is simply not true.

Guitars are expensive for a reason. The idea that guitar builders and manufacturers simply slap an arbitrary price onto their instruments is completely unfounded.

But I also understand, this begs the question: Why do guitars cost so much?

I'll answer that in this article.

Guitars retail based on what it costs to make them

Simply put, the builder of a guitar incurs a cost to create and manufacture the guitar.

Thus, the retail price is based on how much they can sell the guitar for and still make a profit, where profit is what they're able to charge beyond what it costs them to make the guitar in question.

At that point, they have a decision to make.

How much can/should they sell the Epiphone Les Paul Custom for?

If they run the price too high, they risk alienating buyers who aren't willing to pay the high price. But if they go too low they either don't make a profit or they don't cover the losses they incurred to build the guitar in the first place.

More specifically, when you buy an electric guitar (this doesn't apply to acoustic guitars) you're paying in part for the pickups.

Pickups are a significant part of the material contributing to cost in an electric guitar.

If they're included from a third party pickup company, like Seymour Duncan or Fishman, then the cost of the host electric guitar will likely be higher. 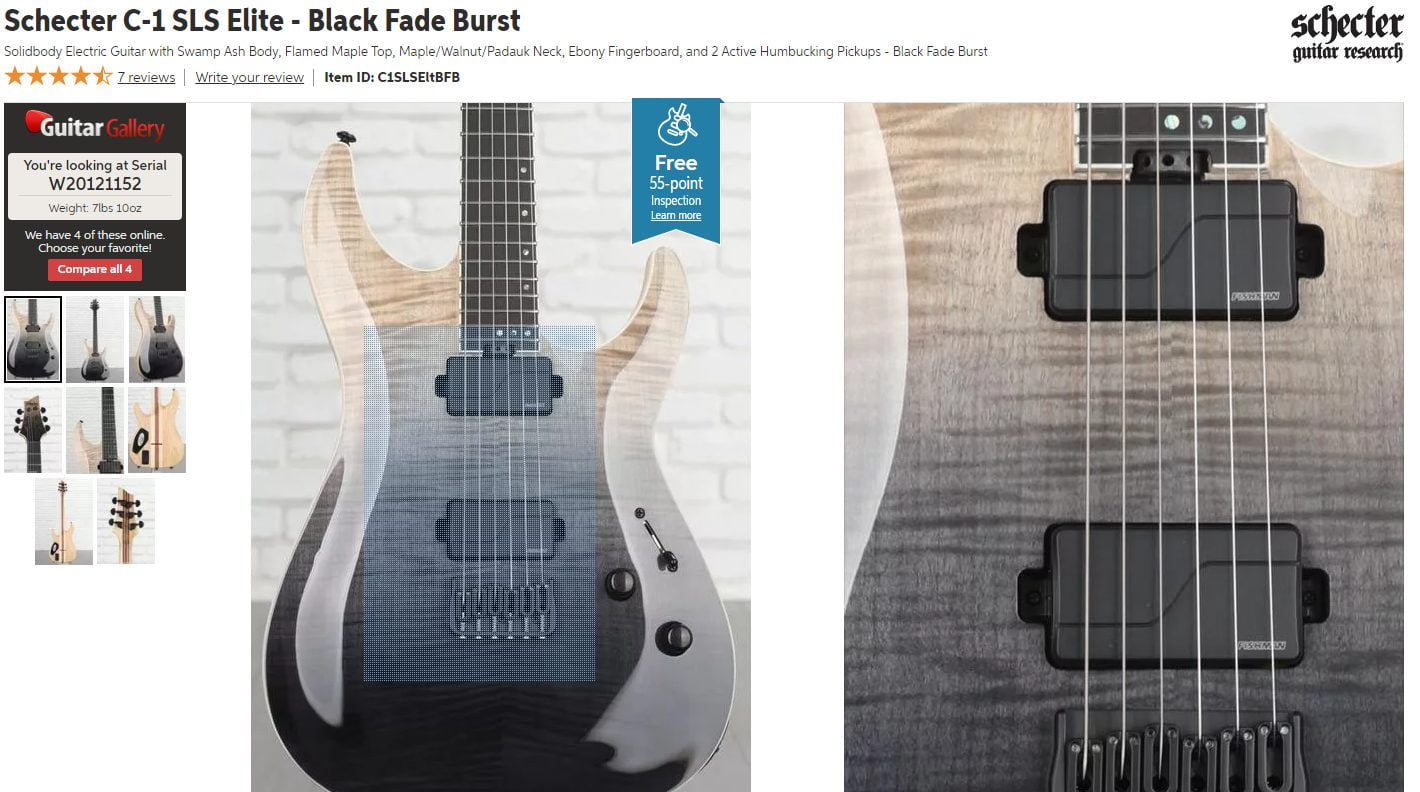 This Schecter C-1 SLS Elite comes with Fishman Fluence humbuckers, which themselves are fairly expensive. This pushes the price of this particular C-1 up to around $1200 retail.

The alternative is what we call a "stock" pickup, where companies provide their own cheap, pickup parts which are usually produced or procured in bulk. These pickups might bare the name of their parent company, but are still far cheaper and lower in quality then the name-brand pickups.

For the cheaper Fender Player Stratocaster, you have pickups called "Player Series Alnico V" which is just type of stock single coil.

This approach helps reduce the cost of the electric guitar, but also costs you a lot in terms of tone quality.

One of the best examples of a difference in cost is the PRS SE models versus the regular PRS guitars.

You'll notice that the PRS SE guitars have a completely flat top, which you can see clearly in this photo: 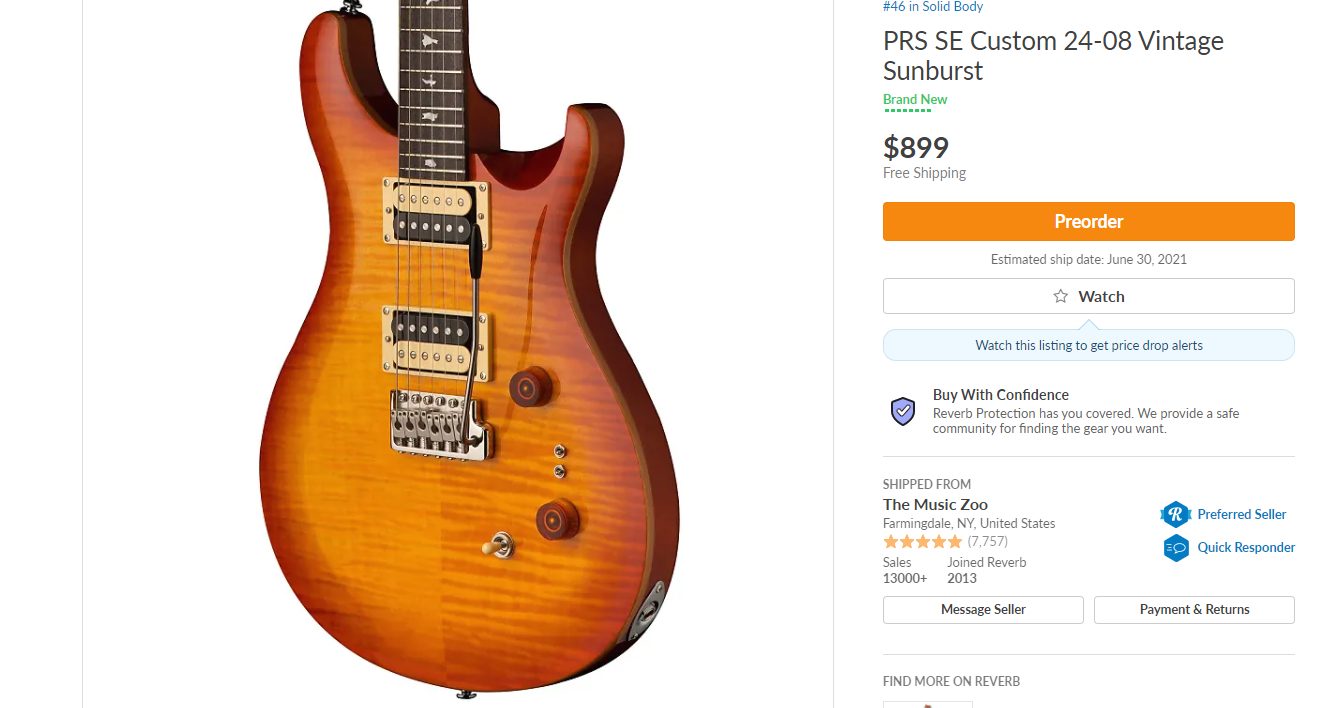 The top piece of the PRS SE Custom 24 is almost completely flat. Image via Reverb

Now, compare that picture to the following photo from Sweetwater's entry of the PRS Custom 24, the almost $4000 version of the same guitar: 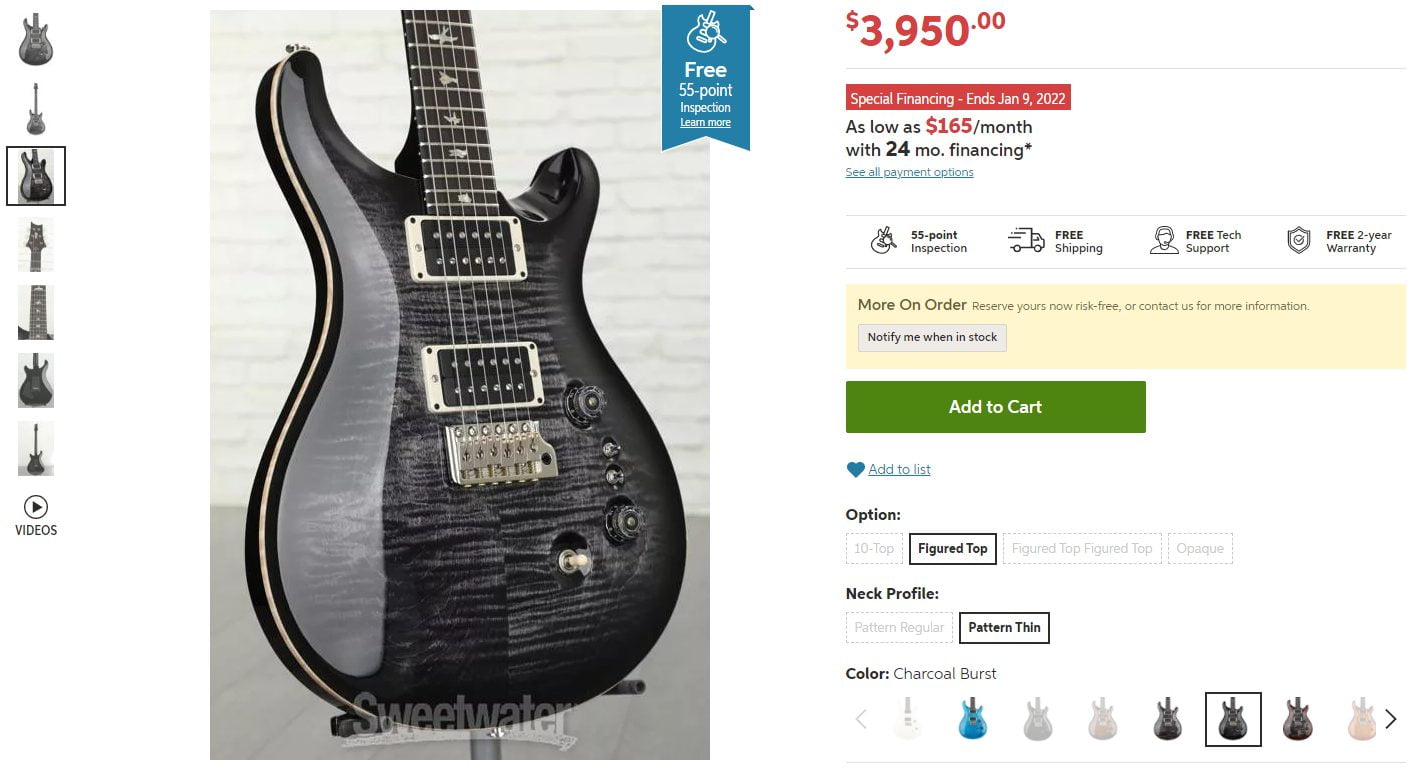 The $4000 PRS has a dramatically different top profile, which shows a lot of hand carving and attention to detail, ultimately missing from the $900 guitar.

I've owned several SE electric guitars and once asked a friend of mine, who did woodworking for a living, if he could replicate this carved top. After researching it for awhile, he said the hours it takes to get that kind of look made the price tags of nicer PRS guitars make sense.

The more carving and attention to detail given to the guitar's body, particularly the top piece, the more cost you're going to incur.

It's more expensive, but it looks absolutely fantastic.

To stick with the PRS example, the cheaper SE models - the "economy" line of PRS - are manufactured in South Korea, in a factory environment.

The mainline PRS guitars, the ones with the nice carving, are built in Maryland, with a lot of aspects of their manufacturing handled by hand. 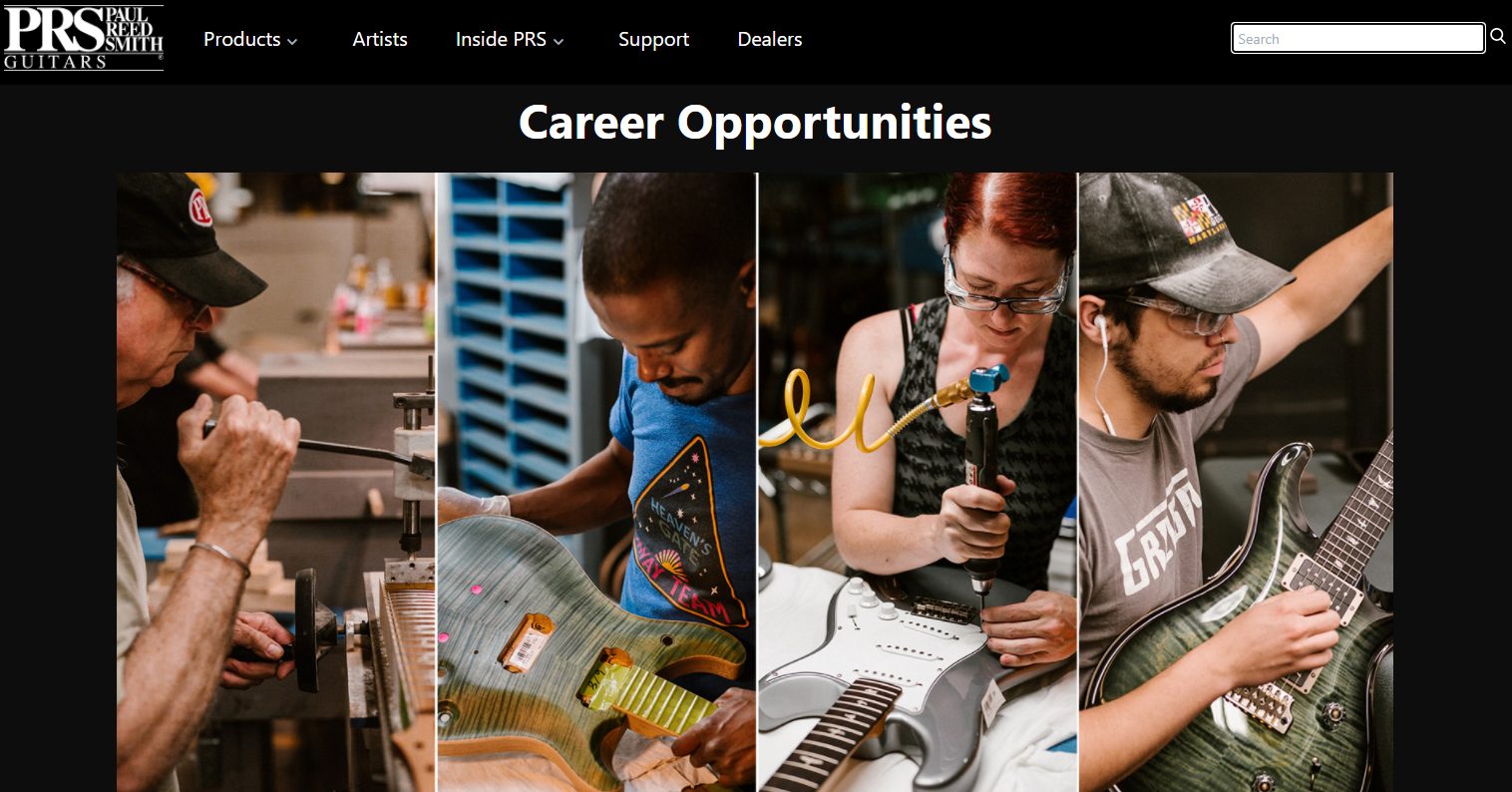 The PRS careers page shows a lot of hands-on work being done, for what it's worth. Image via PRS Guitars

There's a reason companies shift manufacturing overseas, because it's often cheaper for them to build their products and then ship them back to customers in the United States.

Regardless of how you feel about that practice, it's a way that guitar builders control cost.

There's also the added factor of customers being willing to pay more for something that was built in the USA. When you have guitars that are built in the United States with more attention to detail and hands-on work, you incur more cost in part because people are simply willing to pay it.

And that brings us to our next factor: The amount of "by-hand" labor involved with the building of your guitar.

How much time did guitar techs and luthiers need to spend?

Here are a few aspects of guitar building that can require hands-on attention for an hourly rate:

The more of this getting done by hand, the nicer and more valuable your guitar is likely to be.

Though not as typical, customization is another factor that can dramatically increase cost.

This is why signature models of electric guitars are typically a lot more expensive.

When I say "customization" it could refer to any of the following:

These are all features that can be tweaked by request, where each change or addition will incur a cost. Generally speaking, the more customized a guitar is, the more expensive it's going to be.

Age/Production Year of the Guitar

The next contributor to cost is the age of the guitar and the year it was manufactured. This variable can actually work to make the guitar cheaper or more expensive, depending on a few different factors.

Used guitars that are just a few years behind the current model are almost always cheaper. However, if you're talking about a really old guitar, like 1950s or '60s Fender Stratocaster that has some appeal to collectors, you're actually likely to pay more for those guitars because they're considered antiques and collectibles.

If you want to cut cost and buy a used electric guitar, aim for guitar's that are around 3-6 years behind the current year's model.

Though it's subjective and more ambiguous than the other factors we've mentioned, the reputation of a guitar's brand does have an impact on how much it costs. For example, Squier guitars have their own established price range, which doesn't change dramatically, from year to year.

People know that Squier is an economy brand, so they're naturally cheaper than actual Fender guitars.

On the opposite end of the spectrum, Gibson guitars are well-known to be more expensive, which means people are naturally willing to pay more to get the Gibson brand name.

Reputations will vary, depending on the brand you're considering and the series within that brand.

For example, the Standard series in Ibanez is always cheaper than the Prestige series. Both are Ibanez guitars, but one series tends to cost less money than the other. Another good example is the PRS SE series, which rarely goes over $1000 while the mainline PRS guitars rarely go under $3000.

Thus, it's important to note that cost doesn't just follow a brand broadly, but exists as tiers within that brand.

Another good example would be the Player and American series within the Fender brand:

Here are some of the PRS tiers:

These tiers are always based on some group of quality indicators. For example, the American Series Stratocasters usually have Fender-brand Noiseless pickups, while the Player Series only has stock single coils.

As you get familiar with guitar brands and quality tiers, you'll naturally get better at picking out features and pricing and figuring out where you want to spend your money.

This covers the most important factors that play into the cost of a guitar.

With so many aspects of building a guitar requiring time and resources, it starts to make sense why they cost so much, and why companies price them the way they do. The bottom line is that it takes a lot of work on the front end to produce these guitars, which makes the high retail price necessary.

While there are cheaper electric guitars that are still worth investing in, a lower price is usually going to mean that some aspect of quality has been sacrificed.

Look for that balance between price and quality.

If you have questions about electric guitars, how they're priced, or anything else related to this topic, drop me a line in the comments section below and I'll jump in.