The Xvive wireless guitar system is an affordable and effective method of setting up your rig with a wireless connection. After several rounds of testing with guitar and bass, both on a stage and in my home, I have absolutely nothing bad to say about it.

I got a chance to test the Xvive U2 guitar wireless system at my home office and at my church. I'll share those experiences, but first, let's talk about some of the basics of the system.

Both devices are powered by a lithium-ion battery, which lasts about five hours total before needing recharged. The longest I ran the unit was two hours, before recharging for each additional use. In most cases I used it for about an hour at a time.

At no point did I test the five hours claim, though I suspect it's an accurate claim by Xvive, given the fact I made it two hours without any issues.

You get two devices in the box:

Xvive clearly states that this devices does not work with active pickups.

There's also a charging cable with a mini-USB connection.

An important thing to note: Xvive clearly states that this device does not work with active pickups. For testing the unit, I used my PRS CE 24 with passive Seymour Duncan Invader pickups. 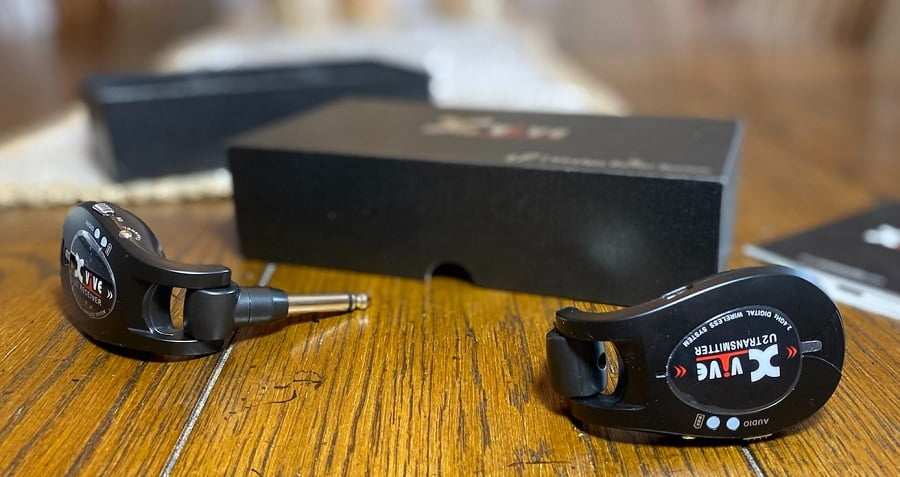 The Xvive U2 guitar wireless system comes with a receiver and transmitter which can both be individually charged.

Create an alert and we'll let you know when the price drops.
Set price alert for Xvive U2 Digital Wireless Guitar System - Black - $154.90

Setup and Ease of Use

If you've used the Line 6 Relay systems, one major difference you'll notice is that the Relay's receiver is a large square base that charges the transmitting unit and connects to the start of your pedalboard or your amp's input.

I like the Xvive system better because both the transmitter and receiver are extremely low profile, and each have their own charging connection.

In my view, this makes setup a lot simpler and less noticeable.

Having that large table-top block on my pedalboard that the Relay system uses, wasn't ideal.

To use the Xvive, just plug in both sides and turn them on.

Setting up the U2 guitar wireless system is pretty straightforward.

I was able to be up and running quickly, without any real setup or connection issues. The receiver and transmitter seemed to communicate fine without any drops in signal or interference.

Any breaks in signal?

In total, I probably spent about six to seven hours with the Xvive U2 guitar wireless system, and at no point did I notice any kind of break in the signal or loss of a connection.

Granted, you can certainly expect to see some breaks in connection if you move far enough away from the receiver, but we'll discuss distance later.

What I was looking for were little "blips" or brief losses of connection where distance was clearly not the issue.

This was something I've seen in other systems, but did not experience in the Xvive U2.

As I mentioned earlier, the official word on the battery life is five hours. I did not test this claim, but was able to make it through two hours of playing without any issues. The five hour battery life is dramatically shorter than the Boss WL-20L which gives you 12, though I can't imagine a scenario where I would need to play five hours straight, let alone 12.

The five-hour limit provides plenty of head room, which keeps me comfortable going to the two hour mark without worrying about battery life at all.

Even if you need to run the unit closer to its limit, just keep an eye on the battery life indicator.

Again, this is probably more distance than you need.

At church I walked around our sanctuary to try and find "breakpoints" and noticed some variance where I would lose signal before or after the 70 foot mark, depending on where I stood and what was between me and the receiver.

A clear line-of-sight is going to give you the best result.

However, for most stages or in-house playing, 70 feet is going to be more than enough distance to work with.

The Boss WL-20L gives you more channels, letting you go up to 14 total, while the Line 6 Relay only gives you the single channel to work with in the table top receiver. 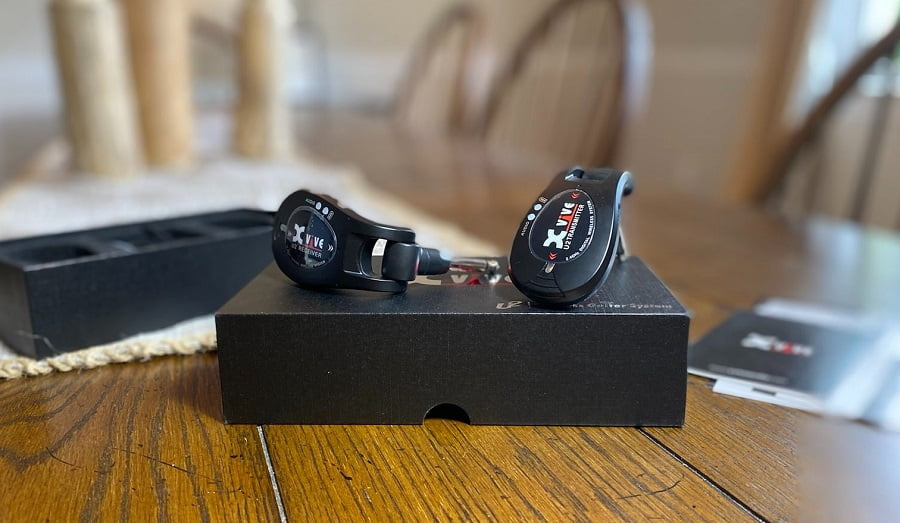 The receiver and transmitter both have four distinct channels to choose from, which is helpful if you're using multiple units at once.

For most guitar players who buy a unit like this, one channel is enough.

But those buying multiple units for band members should pay close attention to the channels feature.

At the time of my review, the Xvive U2 retailed for about $155. This comes in cheaper than the Boss and Line 6 units.

Some of the different Xvive colors you have to choose from are only $150.

As far as we know, there's nothing else different about these slightly cheaper versions.

Given this low price tag, the Xvive U2 has the best value of the mainline wireless systems on the market right now. Note that pro-level wireless systems, like those built by Sennheiser and Shure, are in a much higher price bracket (usually between $500 and $1000).

Though for simpler setups, particularly when multiple channels aren't crucial, the Xvive units are an incredibly solid value.

While the Xvive is certainly not on the same tier as the pro-level wireless systems, they're an effective and affordable solution for home-based setups, churches, or small to mid-sized venues. Particularly if you're looking for a wireless setup for just your rig and you aren't trying to coordinate channels with multiple band members, the Xvive U2 is a great fit.

Written by Bobby on Rigs and Guides