The John 5 Telecaster now links to the Reverb entry, though it seems to have been removed from most big retailers. The Jim Root Telecaster has been confirmed to be discontinued, so we're working on replacing that and the Squier Hot Rails Strat. More updates coming to this page.

You want value out of your new guitar. Every guitar player, beginner or otherwise, wants to know that they’re getting as much for their money as possible. Because it’s not often that you actually get to buy a guitar. And you might know that Squiers are great cheap electric guitars. I can vouch for that. But what’s the best Squier guitar for you?

Are there some junk deals that you should avoid? What about the best Strats and Telecasters? Which ones should you target?

Why Squiers can and do make great Fender alternatives

You don’t want to spend Fender money but, you also don’t want to get a lemon. And while Squiers are generally great guitars for what you pay, there are models that are better than others, that give you more value. This list will help you optimize your Squier electric guitar shopping. The guitars in this list, while not equal to their Fender counterparts, are great budget alternatives and some of my favorite recommendations to beginner guitarists.

We’ll cover some of the best Squier Strats and Telecasters, namely the following:

At the price tag you won't find much to complain about. As a player of nearly two decades this model of the classic Jaguar is still appealing to me. You get the Duncan-designed pickups, which are similar to the Seymour Duncan Antiquity set, in a great looking guitar that’s visually indistinguishable from the Fender version.

Dual circuit switch and the vintage, non-locking tremolo are the two “highlight” features: 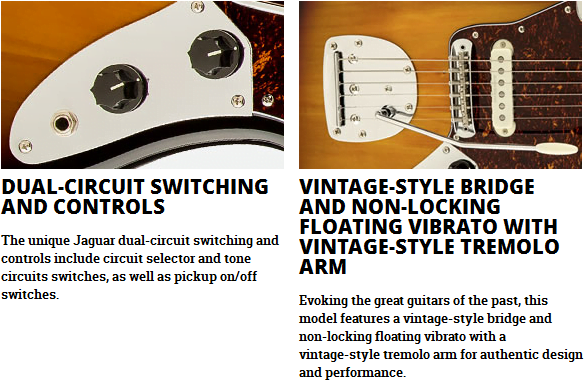 Squier’s highlight features of their Vintage ﻿Jaguar﻿. Image via Fe﻿﻿nder

The tone and resonance is crisp and warm, sounding particularly inviting with clean lead melodies and pick scrapes. Jen Trani’s demo is a great showcase. We love this version of the Jaguar for beginners of all walks, especially the Kurt Cobain fans among us. Even players with some experience under their belts might find the Vintage Jaguar to be a good fit.

But, at the same time, they're surprisingly responsive and satisfying from a tone perspective. While they can be a little noisy, don't assume that's a Squier issue. I owned a $1200 Fender American Telecaster that had a lot of problems with noise, which is, to an extent, part of the Telecaster charm. They've got a twang and slap back sound that almost does better with a little extra noise in the pickups.

In that regard, this version of the Tele sounds incredibly good. Pickups are the standard single coil arrangement you’ll find in mid-range Telecasters, with Alnico 5 magnets. Tonewood is Pine in the body of the guitar, which actually feels fairly heavy and solid. The neck is the familiar lightly-colored Maple that you see on a lot of Fender’s more expensive guitars.

I’d say its strongest response comes with both pickups selected, pushing a clean tone with a little bit of reverb. Bluesy runs and clean finger-picking just sound fantastic, with the familiar Tele twang that you wouldn’t expect out of a guitar at this price.

The neck pickup by itself produces a deep, bluesy response that’s strum-friendly and adaptive to high gain levels. For less than $400 this is a beautiful instrument that gives you a realistic taste of what it’s like to play a more expensive Telecaster.

IDEAL FOR: Country, blues, jazz and the player who doesn't know what kind of music they're into

Anytime you see “Classic Vibe” in relation to a Squier guitar, it’s in reference to an entire line of electrics and basses that Fender produces. We’ve mentioned a few of them in this post. From the Fender website, you can sort through all of them on the same page: 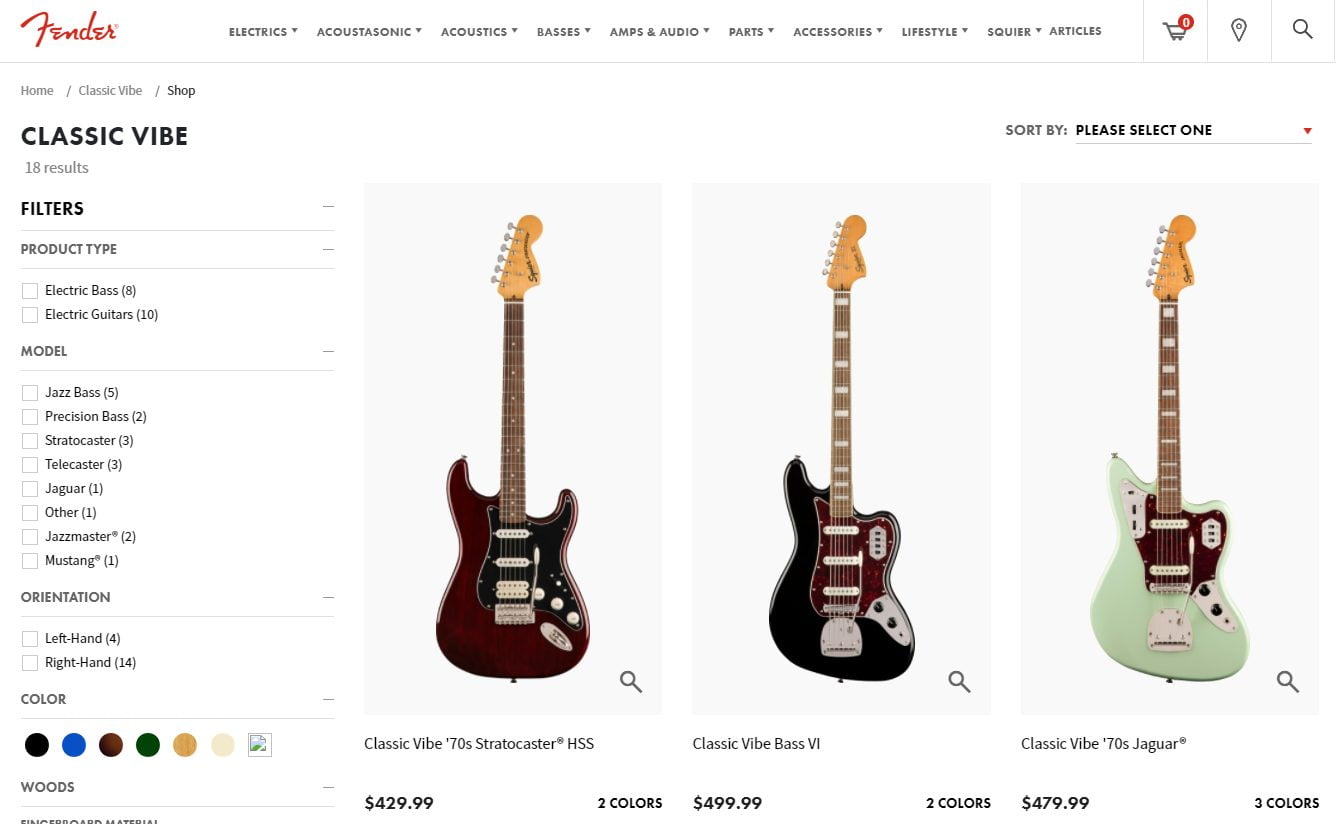 You can browse through the entire Classic Vibe series from Squier via the Fender website. Image via Fender﻿﻿

The '70s Stratocaster is one of the highlights of the group, with a vintage-style tremolo and the three single-coil Alnico pickups. While affordable and plentiful, the Poplar used in the guitar’s body has a soft and dynamic tone that does a surprisingly good job of capturing the familiar '70s guitar tone.

This guitar nails the aesthetics and stylistic aspect of the genre it was modeled after.

The pickups have a distinct bite and growl to them that responds really well to small amounts of gain, which is then easily shaped by a five-way pickup selector. This gives the '70s Strat a surprising amount of flexibility and functionality, especially if you're into heavy blues guitar scene.

For those who don’t know (I didn’t) John 5 is Rob Zombie’s guitar player. The Squier flavor of his signature Telecaster comes with an Alder body that produces a thick, low-end response (especially with high gain levels) and a white binding that looks fantastic though is hard to notice in the above picture. The three-way toggle switch is moved away from the traditional Telecaster position and placed near the top of the guitar, similar to the way Tom Morello has many of his guitars wired.

You've got to appreciate the attention to detail that Fender put into this signature, since it would have been easy to ignore things like the binding and the selector switch location. So even if the pickups aren't anything to write home about, you've got some notable details included.

Clean tones sound really nice and full on this guitar, which I personally liked better than the distorted feel. Part of the appeal comes from the tonewood which is Alder, similar to more expensive Fenders.

Make no mistake, it's not a traditional Fender design. It's metal and should be exclusively considered within that context.

IDEAL FOR: Metal, hard rock and rhythm players or the all-around low-tuning and power chord fan

This Strat looks fantastic with three Duncan designed HR-101 Hot Rails pickups. Add the pivoting tremolo and a five-way pickup selector and you’re good to go. The body is Basswood with a dark-colored Maple neck and a large ’70s-style headstock.

With the Basswood, its tone is similar to the '70s Strat, though with a little more bite and gain coming from the Hot Rails single coils.

It reminds me a lot of the Billy Corgan Signature guitar that Fender used to make.

Slipknot’s Jim Root joins John 5 as a ranking member of the “Metal Guitarists Who Play Fenders” club. His signature Telecaster has a Mahogany body, which is a common tonewood that has also been used in the Gibson Les Paul Jr and early SG models.

The tone has a thick response on the low end with some bite on the highs, ideal for a guitar that’s intended to lean metal. 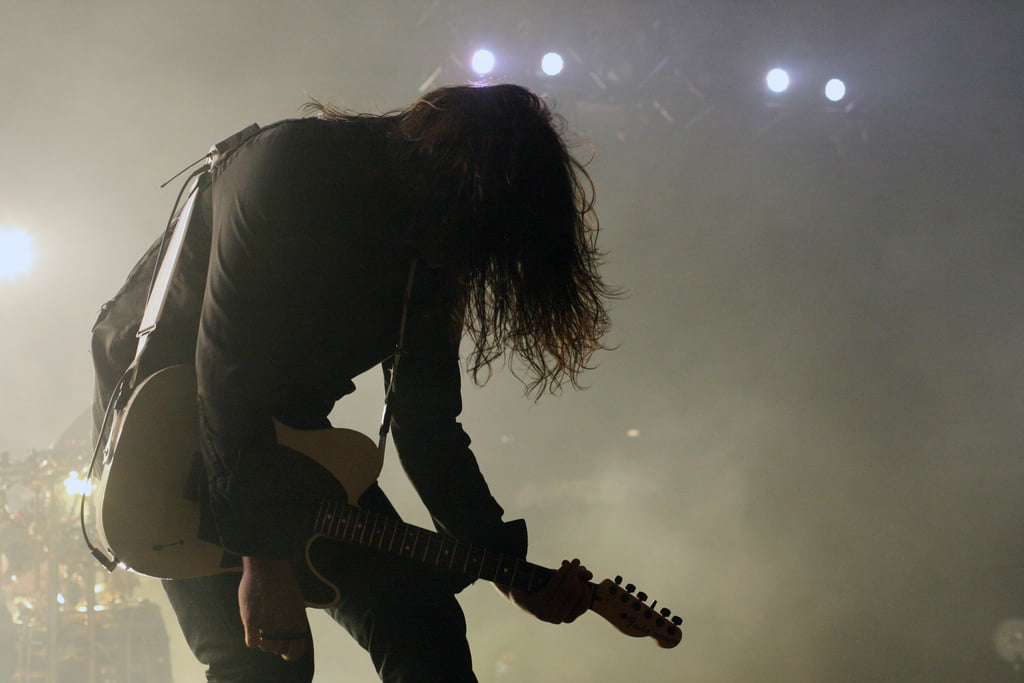 Pickups are a passive set of humbuckers that are meant to mimic the popular EMG design. Strings go through the body while the guitar is limited to one master volume control. If you plan to keep it around for a long time, consider dropping a pair of real EMG passive humbuckers into the mix.

Squier’s version of the Thinline Telecaster has a chambered, semi-hollow body made of a soft Maple with a lightly-colored Maple neck. The pickups are designed to mimic the Fender Wide Range humbuckers, though we're assuming they're a stock version. However, the dual humbucker setup gives this guitar a thicker tone quality which bodes well for rhythm and heavier chord progressions.

You’ll get some added depth and definition from the chambered body, which combines nicely with the treble and midrange resonance. It’s a beautiful instrument, especially at such an affordable price tag.

Easily one of my favorites Squier picks.

The most notable Squier lines would include the following:

The Vintage Modified and Classic Vibe model Squiers are frequently sought after as they will, in some cases, have improved construction, better quality pickups and be overall more reliable instruments.

So here’s the deal:

We know we’re getting good prices, so we’re going to try to add the most quality possible to that low cost.

All the Squier guitars in this list, while cheaper, meet reasonable quality standards and make great beginner guitars.

Should I buy a Fender instead?

Squier guitars are fantastic instruments for what you pay, despite the cost-cutting measures that Fender takes to make them available at the lower prices.

If you’re willing to spend $500 or more on your guitar, Fender is worth the additional investment. However, those who are just starting out or who don’t want to spend that much on an instrument right away, will be well-served by these Squier options.

It’s mostly up to your own goals and budget.

If you’re just trying this music thing out and want something cheap to get your feet wet, Squiers are ideal beginner guitars.

There’s no shame in waiting on the Fender purchase.

Are you pro or anti Squier?

It’s an interesting topic, because a lot of people believe that Squier electric guitars are every bit as good as Fender.

Share your thoughts and experiences in the comments section below.