Added pictures of the Astral Destiny and an embed of Bonedo's Astral Destiny demo. We've recorded our own demo of this pedal and will try to upload it in the future, but Bonedo does a really good job with their content so we'll stick with them for now. Note that the red and gold versions of the AD are interchangeable.

Within its price range the Astral Destiny personifies everything we could want out of a modernized, ethereal reverb pedal. Outside of some fairly minor complaints, it's hard to do much better if you're into ambient reverb trails.

The modern recipe for ambience goes something like this: Build several reverb algorithms, extend the trails, add a mix knob, mix in mostly the wet sound, add octaves to the trails, and top things off with some regenerating intervals.

This process is far more advanced than the older reverb pedals we've seen, especially when compared to most amp-based reverbs. Even with ones we like, such as reverb in the Fender amps, it's primitive compare to some of these newer reverb/ambience pedals.

In most cases you should try to follow these best practices:

The Astral Destiny by EarthQuaker Devices has surprised me a lot in terms of how well it sets up this preferred process. It's just an absolutely fantastic set of digital reverb algorithms.

The Astral Destiny is a digital, ambient reverb pedal with some modulation and intervals built into the algorithms. We tested it out on our dining room table, as per usual.

It surprised me, given the wide range of reverb pedals I've tested.

To be honest, my expectation was that this would be your garden-variety reverb pedal, but I was totally wrong on that assumption.

At this point in my pedal testing career, it's one of my absolute favorites.

We review products based on in-house testing, thorough market research, and community consensus. However, reviews are inherently subjective and liable to opinion. Keep this in mind when commenting, along with the fact that we are bozos and are probably wrong. Also keep in mind that we support ourselves using Sweetwater partner links (the orange buttons), but at no extra cost to you. If you have questions, jump into the comments section below and we'll discuss.

Compare to Other Reverb Pedals

There are plenty of possible comparisons here. You can different pedals with the plus sign on the compare bar (comes up in the right hand corner. You can also click on the pedal title in the compare box to see individual product pages for each reverb pedal

Sometimes we do our own demos, but Bonedo is just far better at it, so we like to link to his stuff whenever possible. Note that the red and gold version (the Sweetwater exclusive that we used) are essentially the same pedal.

You can see pricing on the comparison chart above, but below we have a far more comprehensive pricing section with multiple vendors and price drop signups, all for the Astral Destiny.

The Astral Destiny is all about trails.

If that's what turns you on, you'll get your money's worth. It's almost as though these types of reverb pedals deserve their own category or sub category. Maybe call them ethereal reverb or ambient reverb - something like that.

It's less about blues - less of a Fender reverb sound - and more about crystalized and sparkling ambiguity. The tone is more like what you'd hear out of a keyboard then an electric guitar.

I tested and liked all eight algorithms, finding nothing to complain about.

Most of the variety between the algorithms is baked in since there's not as much control over the effect, and instead gives you variety by algorithm selection (more on control later).

And there's definitely some nice variety with the options you have. Here's a quick list directly from Sweetwater and EarthQuaker devices: 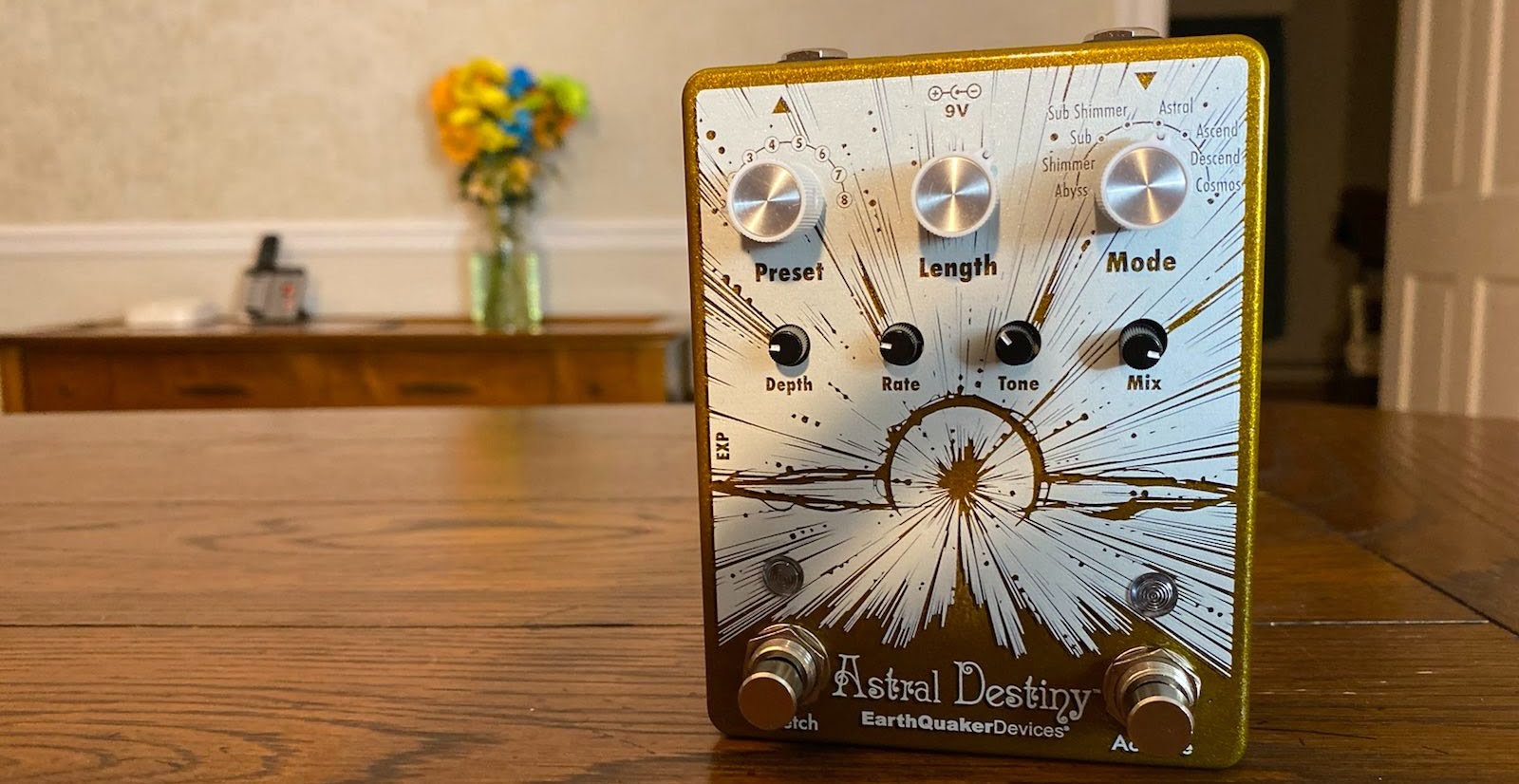 There are eight algorithms to choose from with eight presets that save each the algorithm with your preferred settings - length, tone, mix, and stretch.

Most of the trails have a shine and sort of crescendo quality and seem to take on a life of their own as they progress, getting further away from the initial dry signal. I liked keeping the mix emphasizing the wet signal, especially for sustained notes, which seemed to be where the trails were most effective.

Changing the length of the trails works as expected, though I liked having the trails set long, since I basically used the algorithms for ambient layering of single notes.

I also really liked the trail extension I got out of the Stretch button.

Most of the time I just left that button on.

The pitch change you hear in the different algorithms are smooth, without any kind of fuzz or edginess. It's also lower in the mix between the wet signal and the pitching layer. One thing that would be nice (but a really subtle control) would be if you could control balance between the volume of the octave and the reverb trail.

That said, the balance of trail to octave definitely favors the trail, and it doesn't overwhelm your clean or wet signal.

Depth and rate controls let you dial in a chorus effect, adding another aspect to this pedal, giving you the following layers:

The tone you get on the modulation side isn't particularly memorable, but as far as I'm concerned, the Astral Destiny is playing with house money at this point. You do get a slight de-tuned effect when the depth is really high, but I still found it usable at a lot of different settings.

This is the only area where I'd like to complain a little bit about the Astral Destiny.

You have three ways to control the trails and reverb effect: 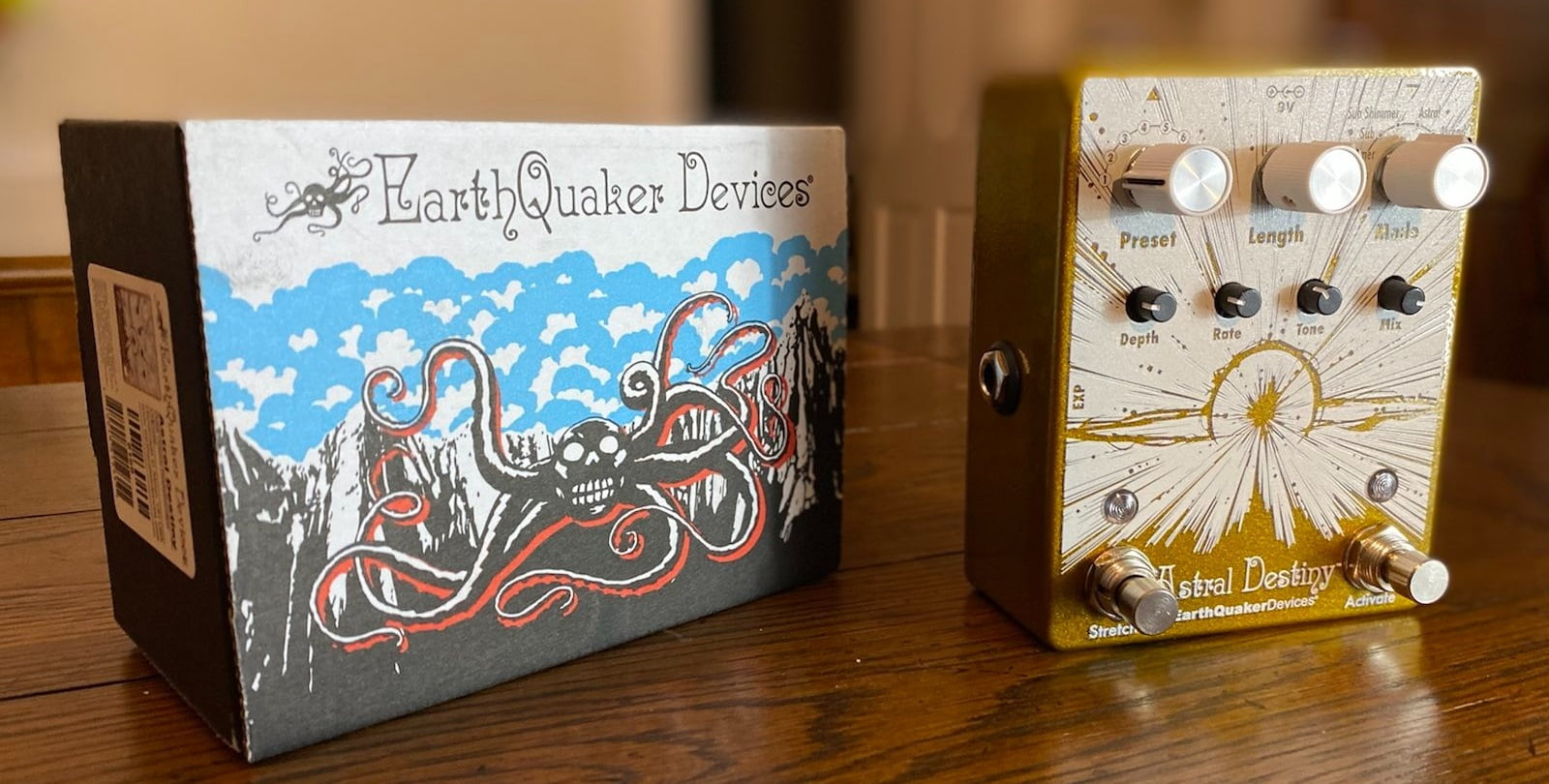 The Astral Destiny doesn't give you a ton of control, but the control you do have - length, tone, and mix - provide a decent amount of variety.

To be fair to EarthQuaker Devices, this still gives you a lot of flexibility. It also helps keep the price down, which is a huge part of the Astral Destiny's appeal. To me, the modulation is a net neutral.

The tone knob is a single band EQ with a nice range, allowing you to brighten or muddle the wet signal to your liking. I found myself leaving that in the middle most of the time.

It's a bit confusing because the mix and tone controls are both right next to the modulation controls and look the same, so initially I wasn't totally sure whether all those knobs controlled modulation.

Expression control, the eight presets I mentioned, and buffered bypass are some additional features worth noting. I really wish you could cycle through the presets without turning a knob, but there's just not enough room on the pedal for additional footswitches.

With plenty of similar ambient pedals going for $300 or more, the Astral Destiny is a fantastic value at only $180. Keep in mind, it was $180 at the time of publishing the review, but that could easily change.

Check the pricing tools above for an updated price.

By leaving out physical preset switches and perhaps one or two more control mechanisms over the reverb trails, EarthQuaker Devices passed that savings onto the consumer, which they deserve credit for.

Given the similarity in sound to pedals far more expensive, the Astral Destiny is easily one of our favorite high-value options.

It's hard to beat the price that EarthQuaker Devices has set for the Astral Destiny.

Any guitar player that plays a lot of modern music, with an emphasis on their clean signal would benefit a lot from the Astral Destiny. Modern rock guitarists that bounce back and forth between clean sparkle and heavy rhythms will find plenty of use for it, as well as church and worship-focused guitar players.

EarthQuaker got a lot right with this pedal. It was fun to play and experiment with, and truly expanded the types of sounds that my guitar was capable of making. It's an easy one for us to recommend.

If you have questions about the our Astral Destiny review, hit me up in the comments section down below and I'll help as much as possible.