Our Pick: The Baby Taylor

The Baby Taylor is a bit smaller than the GS Mini (GS is a "mini concert" acoustic while the BT2 is a 3/4 dreadnought). But, the Baby Taylor wins out for us because it gives you most of what the GS provides, with a significantly lower price tag. Unless you don't like how small the BT2 is, it's our clear choice between the two instruments, simply because the value is higher.

Both the Taylor GS Mini and the Baby Taylor are small-form acoustic guitars with a similar spec sheet. In this article we'll do a simple side-by-side comparison to highlight the exact places where these two acoustic guitars differ.

While these guitars look fairly different, they don't have a lot of technical distinctions.

Most of the noticeable differences are related to body type, size, and aesthetics.

For example, both guitars use solid Mahogany for the top piece, but the Baby Taylor top piece appears a bit lighter in color.

We'll list the most prominent differences between the two guitars here, for those wanting a quick answer.

We've found that the price difference - the increase for the GS Mini - is a bit strange given the similarities between the two models. Other than the retail cost, the body shape and the bracing are the only significant distinctions the two models have from one another.

As you'll see in the next section, the GS Mini employs what Taylor calls a "Grand Symphony" design (basically a concert acoustic) while the BT2 is a traditional dreadnought shape in a 3/4 body size.

Table of Contents (click to jump)
Other Acoustic Guitars (comparison chart)
How do they both sound?
What are the bodies like?
Neck & Fretboard
Parts and Accessories
Which one?

How do they both sound?

Though both guitars use Mahogany and Sapele for tonewood, the sound profiles of both are quite different. The GS Mini is crisp and bright with a lot of melodic nuance and emphasis on the picking hand.

This is something we expect from smaller guitars, especially with the concert (grand symphony) body shape.

The BT2 is significantly softer and warmer. It has what I'd describe as a "full" sound that's better for strumming and conventional acoustic rhythm.

Keep in mind, these are generalizations and not exclusive rules. The GS Mini can definitely be a good strumming acoustic (most acoustics are) but it lends itself more to lead acoustic guitar than the Baby Taylor.

As we've already mentioned, both of the acoustics use Mahogany for the top piece and layered Sapele for the back and sides.

Both guitars - if you look on Taylor's manufacturing pages - are listed as having a solid top, which definitely helps with the tone quality you're getting from such a small acoustic instrument.

It's where Taylor starts to add a lot of value.

Similar 3/4 size acoustic guitars - like the Martin LXK2 for example - give you a laminate (layered) top instead. Props to Taylor for getting solid tonewood into the top pieces of these acoustics while staying at or under the $500 price mark.

There are actually multiple versions of the Baby Taylor and GS Mini that incorporate different kinds of tonewood. Several versions use a solid Sitka Spruce top (like the nicer Taylor models) while others use Walnut for the back and sides. You can even get a version of the GS Mini made with solid Koa.

You can also find versions of the BT2 and BT1 with built-in electronics.

Here are all the tonewood arrangements we know of:

In the following table we're comparing only body characteristics, where we've highlighted the differences. Yellow indicates a difference that doesn't impact value (style or preference issue) while red indicates places where a difference does have an impact on quality.

The Mahogany in the GS Mini sounds great and you can definitely hear where the solid top helps project a full tone that doesn't sound small. Without that solid top, you lose some of the boldness of your sound, which is not a problem for either of these guitars.

Otherwise, the only significant spec difference is the bracing in the GS Mini, which provides a little more relief to the pressure of the body.

As we mentioned before, the difference in body shape - and the corresponding difference in tone - could be a preferential issue for some protentional buyers.

Taylor uses a solid Mahogany tonewood for the top piece on the GS Mini. 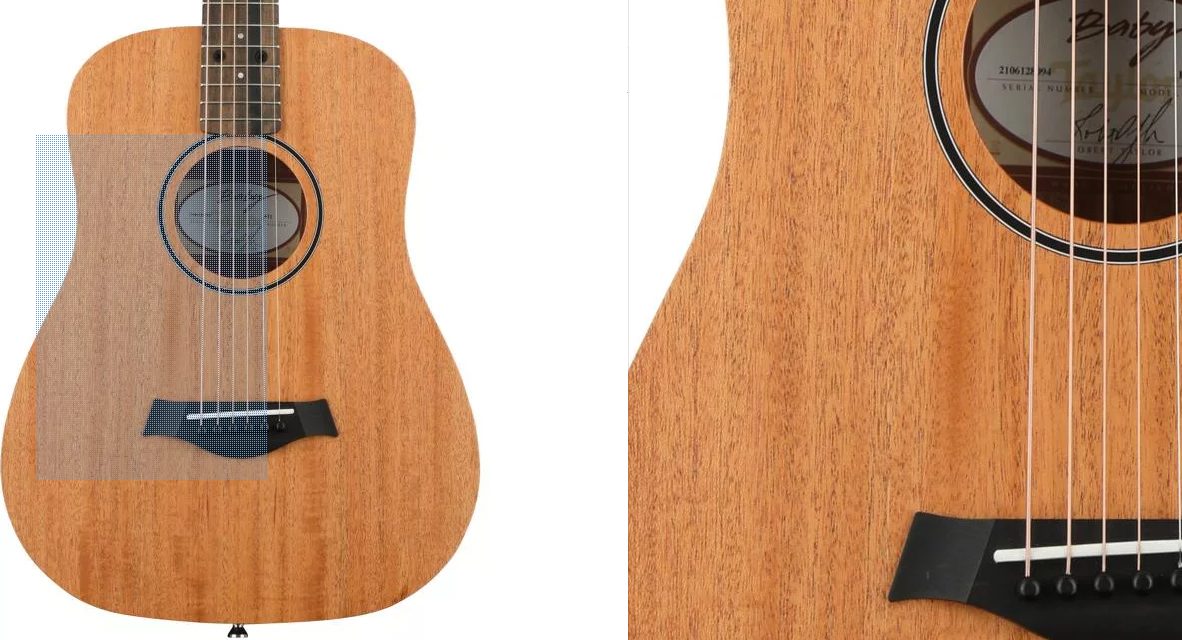 Multiple versions of the BT2 and BT1 are available, including those with both Mahogany and Sitka Spruce tops. The Taylor website lists both the Spruce and Mahogany versions as solid tops.

The GS Mini sticks with Sapele for the neck and heel, basically extending the tonewood already used for the back and sides of the guitar. For the Baby Taylor's neck we get another round of Mahogany, which we'd prefer over the Sapele since it seems to help with warming up the tone and matches the top wood.

Note that the GS Mini has one more fret than the BT2 and that the BT2 uses a screw-in neck type that intrudes on the higher register frets anyway. This makes the GS Mini a little bit larger than the Baby Taylor and certainly reinforces my earlier characterization of the GS as the more melodic (better for lead guitar) of the two acoustics.

Here's a close look at the top of each guitar's fretboard, right around the 12th fret.

On the GS Mini, Taylor uses the same Sapele tonewood used in the guitar's back and sides for the neck. 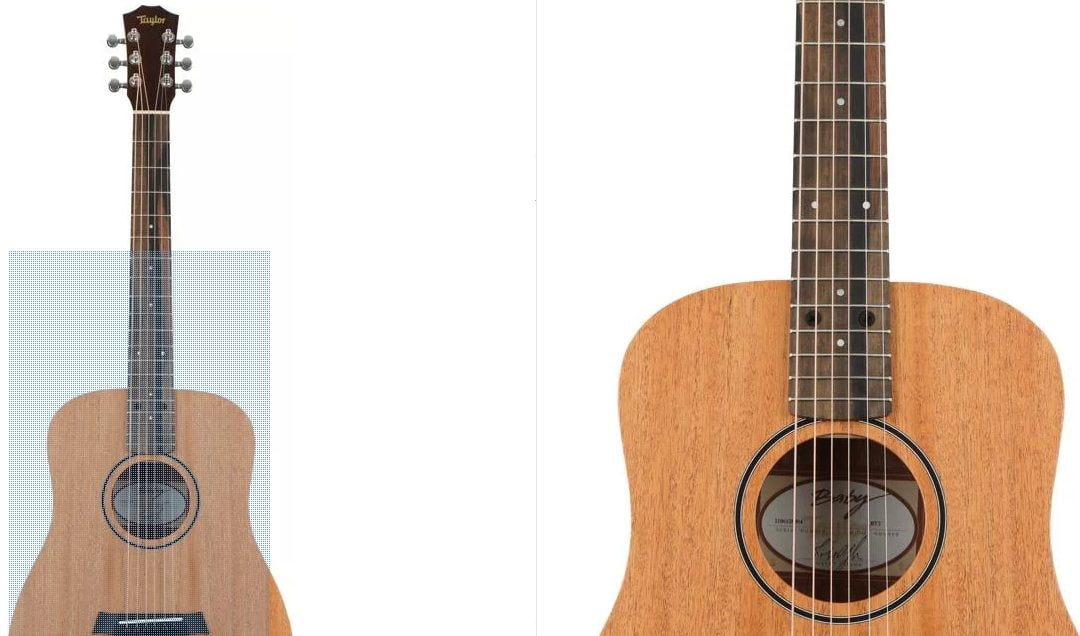 The Baby Taylor typically uses Mahogany for the neck and Ebony for the fingerboard. Note the two screws used to fix the neck to the guitar's body.

There are no significant differences in this category, outside of the type of gig bag advertised for each guitar. The one that comes with the GS Mini is a little heavier and stronger, though just a small notable difference. We've also noticed that included gig bags can change depending on where you're buying from.

Otherwise, the comparison is straightforward right down to the Elixir strings which ship with all Taylor acoustics.

Of the two we have to give the Baby Taylor more credit.

Because it comes extremely close to matching the GS Mini's spec sheet, yet it's significantly cheaper. In the GS Mini, I believe you're paying extra for the better bracing system and a slightly larger guitar, which is understandable.

But since both guitars have solid tops and similar tonewood combinations, it should come down to which sound you like better, as I previously mentioned.

To review, here are the distinctions:

Depending on the style of music you want to play, the difference in sound might be the most compelling feature.

Both guitars are small, close to the 3/4 size, but the Baby Taylor is slightly smaller even with the dreadnought body shape. If that's something that matters to you, it should be considered before you decide between them.

In the end we like both, but the Baby Taylor is clearly a better value.

Questions about the GS Mini and Baby Taylor

Do you have questions about our comparison?

What about the GS Mini or the Baby Taylor specifically?

If you need some help, drop a line in the comments section below. I'll do my best to jump in an help out.