QUICK HIT: Some of the best baritone electric guitars that are ideal for heavy playing and low drop tunings.

Baritone guitars use a really low tuning and strings that are gauged to accommodate.

It’s like a seven-string guitar without the high E.

In this roundup, we'll look at four of the best baritone guitars that give you the most value for what you pay.

If you want a more broad list to pick from, checkout Guitar Chalk's roundup of the best cheap electric guitars.

This Jazzmaster from Squier has a 30" elongated neck that's able to handle much deeper tunings, which are anchored firmly by a fixed bridge. Note that the 30" scale is a bit longer than most baritones. 27 to 28 inches is a more typical measurement. Basswood for the body gives away a cost-cutting method that Fender uses, but you've got to expect that to occur somewhere since the guitar is only $449. And for that matter, basswood is a decent, if not plentiful, tonewood.

It looks good with the Maple fretboard and gives off a deep and aggressive tone.

The pickups are a "Duncan Designed" Jazzmaster-style single coil pair that have the dust of Seymour Duncan on them, but are a cheaper line often used in economy guitars.

For an economy product, the tone and sound quality you get from this guitar is surprisingly good. Low notes are deep and rumbling, with plenty of thickness that somehow manages to be really crisp on the high end as well.

The sound is just really heavy and bold, which are not terms I'd use to describe most Squiers. Somehow Fender managed to pack a lot of firepower into this guitar without spending a ton of money in manufacturing. Then again, $450 isn't the cheapest Squier on the market.

Assuming you're ready to dive into the baritone world, this guitar is a fantastic way to do so, particularly in one of the following contexts:

Getting used to the 30" scale might be a little tricky, but overall this is another fantastic option from the Squier line.

IDEAL FOR: Heavy metal, intermediate to advanced players and those who are purchasing as their primary guitar

Let's get the obvious out of the way first: Not only is this guitar a baritone model, but it's also a 7-string, which is part of the Alex Wade (guitarist for Whitechapel) signature series. This means you can use the deep baritone tunings, but keep your high E string.

A look at Alex Wade repping his signature ESP. Image via ESP LTD

At $979 retail it's a much more expensive outfit than the Squier we looked at, though ESP makes it well worth the extra investment. First, the pickups are Dimarzio D-activators at both the bridge and neck position. To buy them as a set, you'd pay in excess of $170. 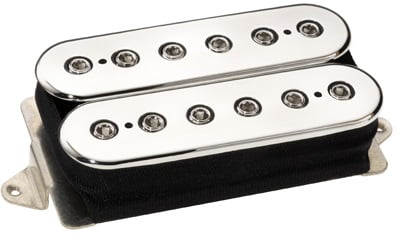 A close look at the white version of the Dimarzio D-Activator pickup (six string version).

In a guitar like this, meant to role with the ranks of heavy metal, it's easily one of the most attractive features.

You're also treated to a Swamp Ash tonewood that's used for the body and sounds fantastic with the low notes and deep power chords the guitar is made to handle. The tonewood does a great job of embellishing the guitar's overall tonal strengths. Some additional perks include locking tuners and a fixed bridge, which help the guitar stay in tune.

Black hardware accents a more menacing look. Note that the scale of the neck is 26.5 inches, just a little lower than a standard baritone.

You've obviously got to be comfortable with the seven string factor. If you get past that prerequisite, I'd recommend this as a primary guitar. Don't buy one if you just want to dabble in baritone or seven-string styles. Buy only if you're sure that's the type of music you want to play and you're comfortable investing in the AW-7B as your main instrument. At this price point, it shouldn't be considered for anything less.

IDEAL FOR: Any baritone style, all skill levels and those who need a thick, deep and resonant tone

The semi-hollow body in the 277 is actually a chambered top, which you can see above the bridge pickup through the fancy soundhole. The neck is 27.7 inches long, right around the standard baritone scale. Other features are familiar PRS SE stat lines, like the Soapbar pickups, a string-thru bridge design and the "bird" fret inlays.

PRS has always done a fantastic job with their SE series and make some of the absolute best economy guitars in the business. At $750 retail, the 277 is a professional-grade guitar that falls well under four-figure territory.

The Maple top and Mahogany body is a typical tonewood combination that gives you a nice balance of both highs and lows in the guitar's EQ. Many of the more expensive PRS Core models, like the "Floyd" Custom 24, use the same tonewood mix (thought perhaps with better wood grades). It's also going to produce a more punchy tone, ideal for thicker power chords and more aggressive rhythm playing.

Overall the tone of this guitar is distinctly deep and heavy, even without distortion.

With a distortion pedal added, you're going to get a thick, metal-friendly sound that's perfect for modern rock and its sub-genres.

The 277 falls somewhere between the Squire and ESP baritone we've already looked at, though it's possibly going to give you the most value for what you pay, depending on your needs. PRS guitars have a thick tone quality to begin with, so adding the chambered body and a baritone design means that type of tone will be even more pronounced. You'd better be wanting and expecting it to sound that way.

If you want to avoid the chambered body and just go with the SE 277 baritone, there's a non-hollow version as well. That version swaps out the soapbar pickups for the more traditional "Zebra" PRS humbuckers.

This will give you a slightly more crisp and airy tone, though is in every other respect, the exact same guitar. As with any baritone, stylistic needs have the final say. Note too, that this guitar can handle anything from a beginner to pro-level players and everything in between.

IDEAL FOR: Anyone completely committed to hard rock and lower tunings

This is one of the few baritone guitars I've seen that offers a bridge with any kind of tremolo functionality. It's not the Edge Zero tremolo system that you see in a lot of Ibanez guitars, but it still gives you a little more flexibility than the fixed bridges we're used to seeing in other baritone models. The most attractive feature of this guitar would have to be the EMG pickups that are set at the neck and bridge position. 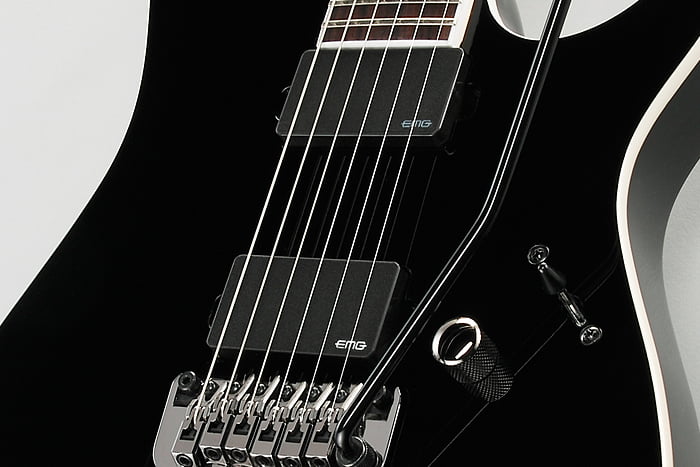 The EMG 60 is at the neck while the EMG 81 is at the bridge, giving you a distinctly modern tone. As you might have guessed, especially considering the EMGs, this guitar's tone is distinctly metal and designed for those that play heavier, more modern-sounding genres of music. Thus, you'll have a lot less versatility.

Then again, if you're exclusively interested in a baritone guitar for metal music, this is a more focused and specialized option.

The neck is scaled 28 inches, and is the Ibanez Nitro-Wizard design, with the following dimensions:

20mm at the first fret is extremely thin, making the RGIB6 a good candidate for the lead guitarist who plays with a lot of speed but also wants the heaviness and power of the baritone strings. Other features include a kill switch, which is an on/off button for the guitar's electronics, and a three-way pickup selector that gives you the following selections: 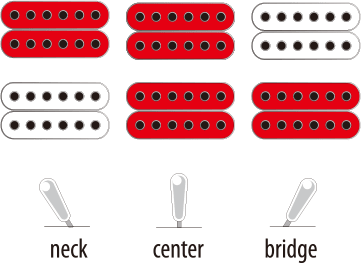 I'd have a hard time recommending this guitar to anyone who isn't entirely committed to heavy rock or metal. In general, Ibanez guitars are geared towards heavy playing, so their baritone model only amplifies that bend. At less than $700, it's a great mid-range model that can handle any skill level.

If you're committed to lower tunings and heavy music, it's your most targeted and niche-specific fit, simply because of how well it caters to metal fans and aggressive playing styles.

Do you need a special guitar for using baritone strings?

In the world of rock and metal guitars, they’ve found a modest amount of popularity since a lot of artists like to have a guitar that can take full advantage of the lower tunings. If that’s you, it might be an instrument you would want to invest in.

That means we want guitars with a good reputation and quality parts at a decent price, that will also suit your specific situation.

There are plenty of guitars out there, and these posts are about narrowing down those options and highlighting where we can get the best value. These are baritone electric guitars that we trust based on their brand, reputation, and our own first hand experience. Hopefully the list has given you an idea of what to look for.

If you have questions about our best baritone guitar selections, feel free to drop them in the comments section below. I'll have an easier time answering directly there, as opposed to email.

Bobby is Guitar Chalk’s founder and a contributor at Guitar World. He has also developed content for PRS, Seymour Duncan and IK Multimedia. You can shoot him an email to get in touch.

Get started with the Sonara Intensive guitar program.