Buying a Floyd Rose bridge means you're either replacing an existing bridge or installing a new Floyd Rose into a guitar that did not previously have one.

Keep in mind, this article assumes you've done the research and work of figuring out how to install your new Floyd Rose bridge (either yourself or by a third party) and that you aren't here for installation-related help.

Instead, we'll just mention quickly that you'll likely be falling into one of the following scenarios:

The simplest of these three processes is that second one, though floating tremolos are a bit tricky in an any context. We'd recommend getting professional help with this from either your guitar's manufacturer, or from a local guitar repair shop with experts that know how to do these installs.

You can also go through the Sweetwater repair shop, especially if you buy a Floyd Rose bridge from them. 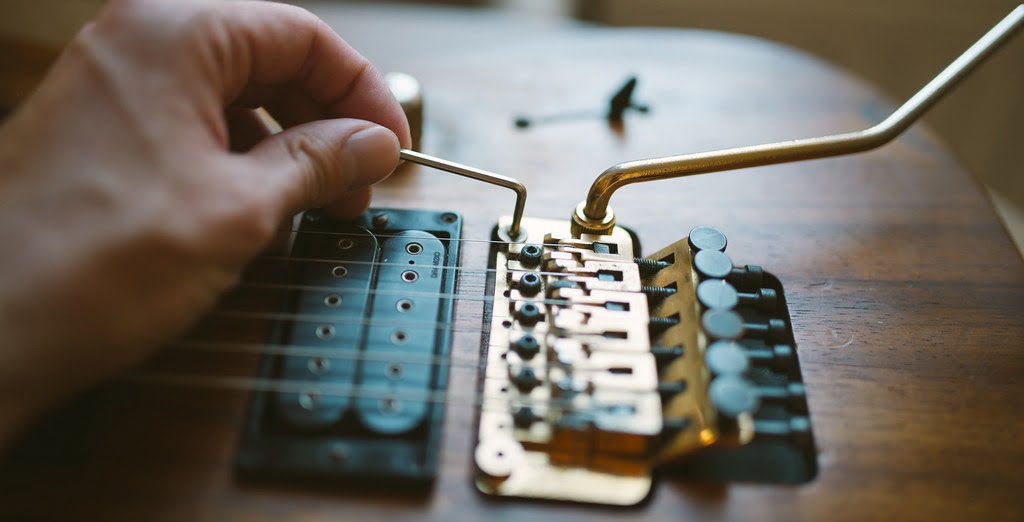 For the purposes of this article, we're simply showing you the best Floyd Rose bridge replacements that are available to you.

While we make sincere recommendations based on real life experience, we also partner with Sweetwater to provide access to gear at no extra cost to you. It's an ad-free, non-invasive way of supporting what we do here. If you're willing to help, consider shopping through the orange buttons. It helps us continue to publish awesome guitar content on a regular basis.

Floyd Rose tremolo systems are all pretty similar, so we'll recommend the four most popular and widely used models here. Keep in mind, models and versions can change before we're able to update pages, so if you notice something off or if you have a question about a discontinued recommendation, leave us a note in the comments section below and we'll check it out. 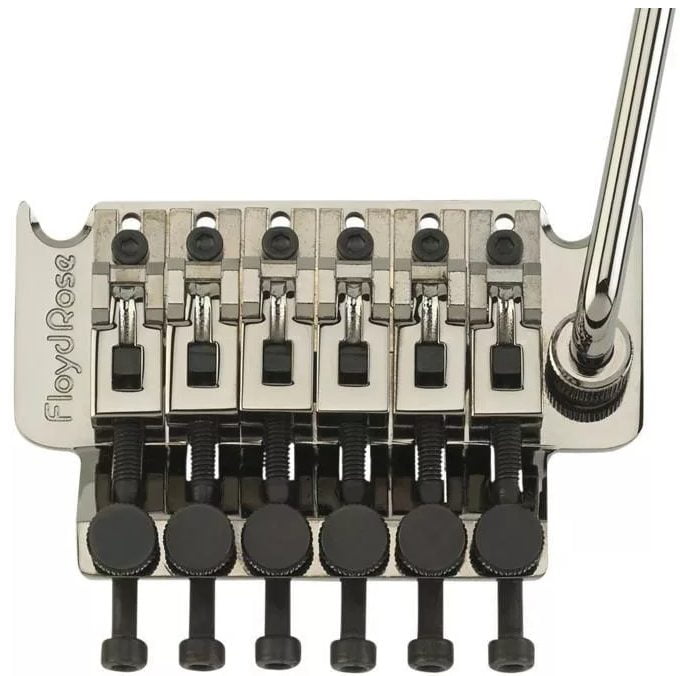 Floyd Rose systems are sold in series that go up by hundreds. For example, the lower models are the 100 series, while the higher ones are the 500. Our first recommendation is the FRT500, even though it's a bit more expensive. It comes with everything you need to install, plus we like the black nickel finish and every part is solid steel.

A double-locking tuning system is also part of the deal.

Measurements for center to center post spacing and string to string spacing are provided below (though they are the same for all four bridges).

IDEAL FOR: All modern playing styles. 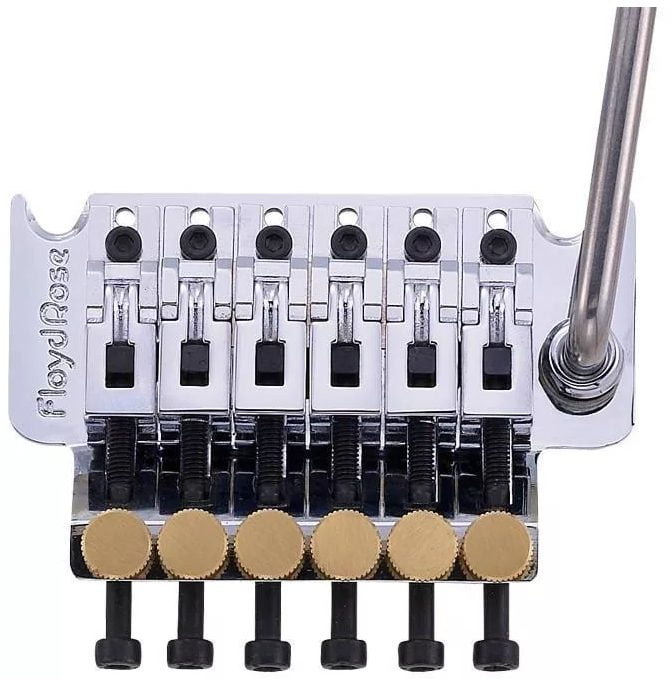 The reissue of the 1984 Floyd Rose tremolo is mostly about aesthetics. You get the silver, black, and gold coloring combination, though a few parts are also dropped down to brass instead of steel when comparing to the FRT500, namely the sustain block and the saddles.

It's a bit cheaper than the 500, but we'd recommend buying this one primarily based on how you feel about the aesthetic appeal.

IDEAL FOR: Vintage and '80s speedsters. 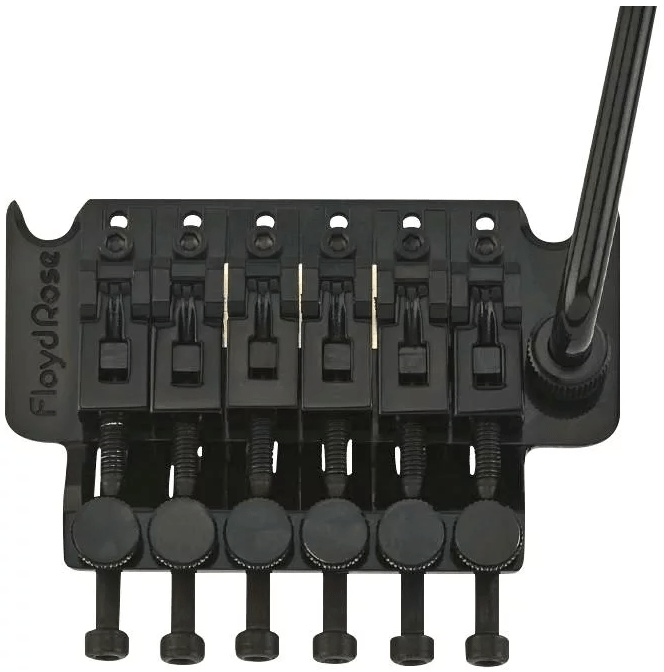 As we go down through the series, parts and material get a little more difficult to decipher.

In the 200, you're looking at "black steel" instead of black nickel steel. It's not going to make a major difference to you from a buyer's perspective, but we should be careful to note that the 200 is about $30 cheaper, which means we'd probably rather have the nickel.

Otherwise, the FRT500 and the FRT200 are hard to tell apart.

The next level down is what they call "chrome-plated." We'll cover more on that next.

IDEAL FOR: Those looking to cut some expense off the FRT500. 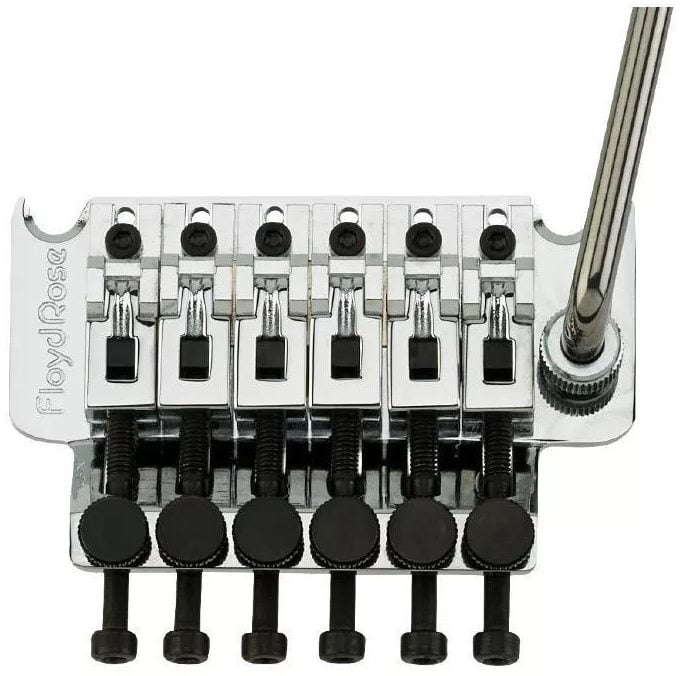 The FRT100 gets you down near the $200 price point and is your cheapest of our top four. However, they also downgrade you to "chrome-plated" which we're assuming goes over a lower grade of steel, though it's hard to tell.

When you hear chrome-plated, it can mean a layer of chrome over a variety of other metals.

Yet, it's not like the FRT100 is going to fall apart on you. It's a fantastic, lower cost option if you don't care about the materials.

IDEAL FOR: Budgets and nearly any locking tremolo upgrade

How do Floyd Rose bridges work?

The concept behind the Floyd Rose is a double-locking design, which locks the strings at the nut (top of the first fret near the headstock) and right before the strings attach to the bridge. This means the strings are technically locked from the top and bottom of the guitar.

It's also based on a floating bridge concept, which sort of suspends the bridge in place, allowing it to bend further forward and backward.

Here's a diagram that does a good job illustrating the concept for all three positions, forward, resting, and backward: 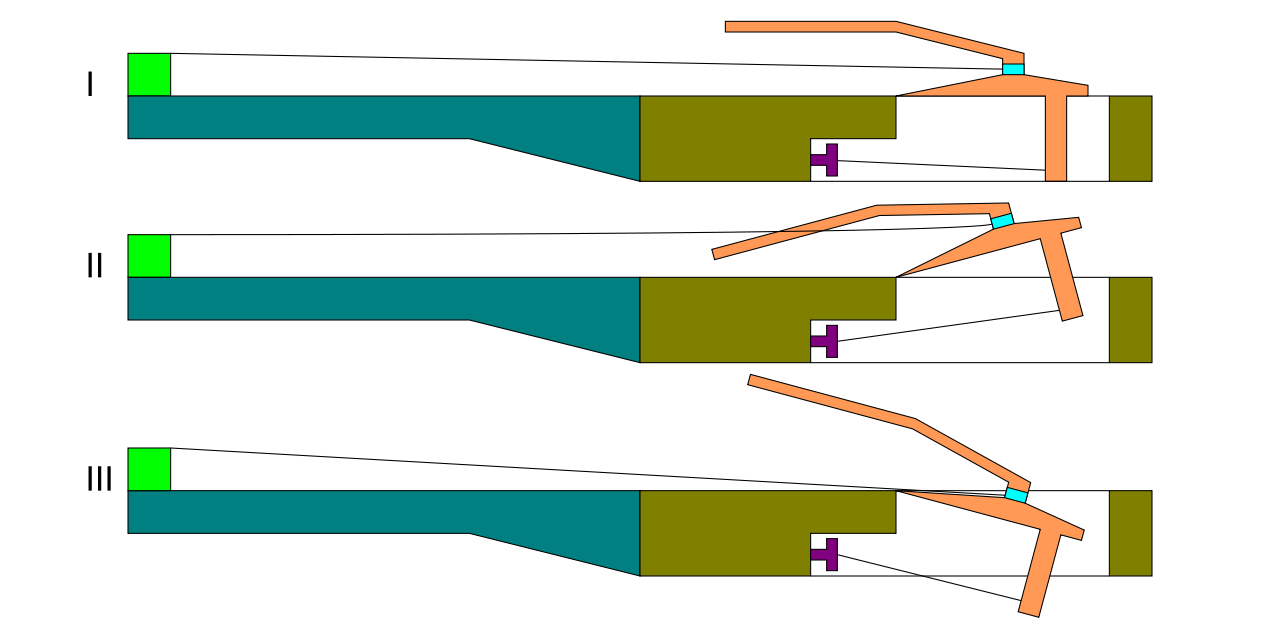 The principles of the Floyd Rose double-locking design. Image via WikiMedia Commons

This design allows you to work the tremolo arm much heavier, going further down and back than you can with a traditional tremolo bridge.

It's noticeably different when compared to something like a Stratocaster bridge.

Yes, they're both tremolo arms that function the same way, but you can bend the arm almost all the way in either direction without knocking the guitar out of tune. This is because the strings are locked at two positions.

If done right, it's nearly impossible to knock the strings out of tune.

How does the locking mechanism work?

Is it hard to set one up?

Where can I get help setting one up?

As mentioned, we'd recommend your local guitar repair shop or the Sweetwater repair shop. If you own a PRS, they'll install Floyd Rose systems as well.

Floyd Rose has a bridge called the "Rail Tail" which is designed specifically for Stratocaster-style guitars. Here's a look at the Sweetwater entry. 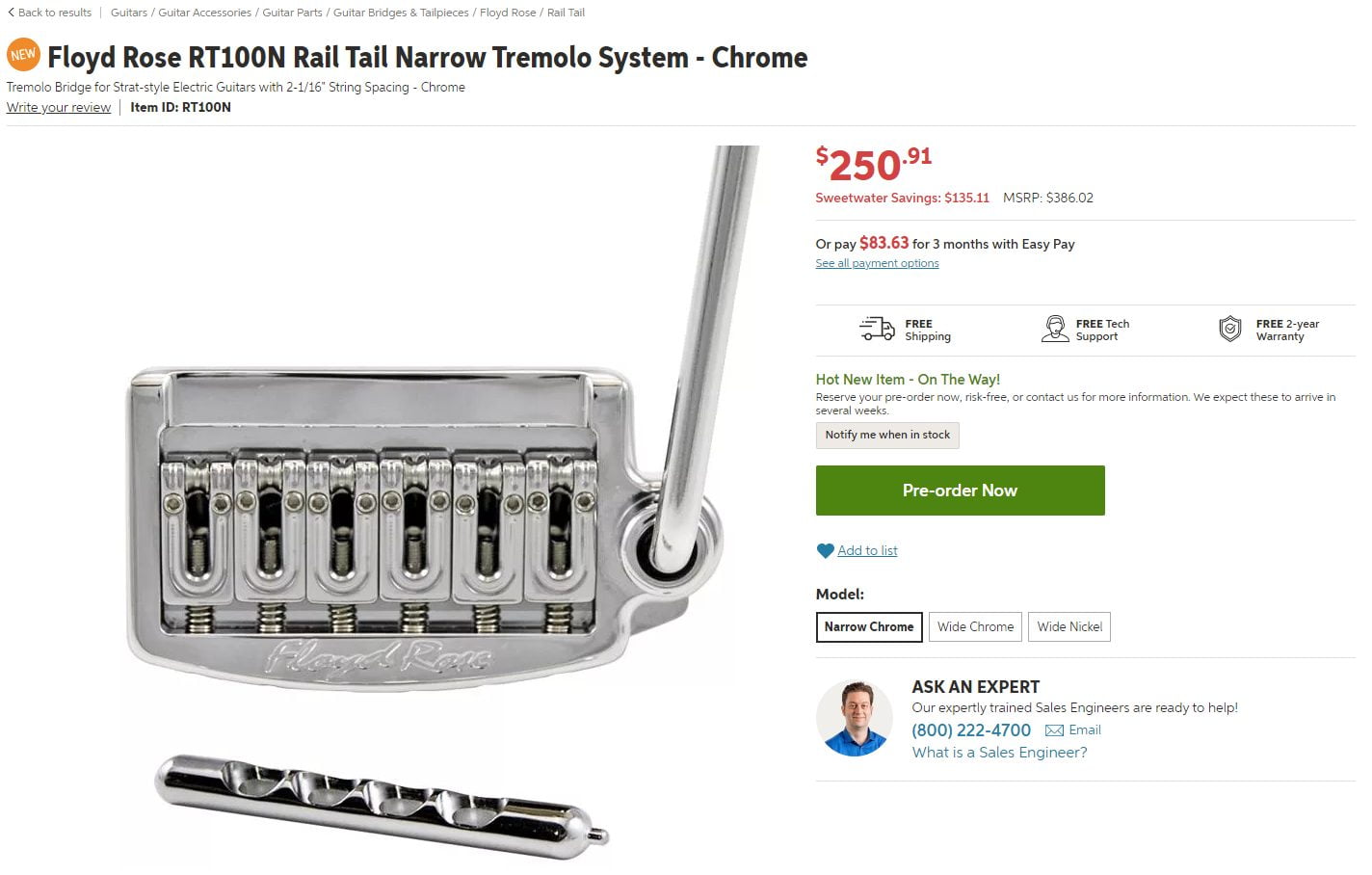 The Rail Tail is a Floyd Rose designed for Stratocaster-style guitars.

You can checkout the Rail Tail via the following link:

Floyd Rose actually makes a top-mount system that can be installed on Gibson and Epiphone guitars without having to significantly cut the body.

The FRX Top Mount system is designed to be used with Gibson and Epiphone-style guitars as a full bridge replacement.

The FRX top mounted system is a little more limited in its range of motion, but it still gives you a similar Floyd Rose experience and the double-locking functionality. We haven't seen this one used as much or have had much experience with it, so we'll leave out a link. If you're interested, we'd recommend seeking out some first hand information on this one.

The "S" or Special Series

Aside from the FRT series, which we've largely covered here, there's a Floyd Rose called the Special or "S" series, which is far cheaper than the FRT options we've recommended.

You'll be able to recognize it by the "special" naming convention and the price tag that usually falls under $100. 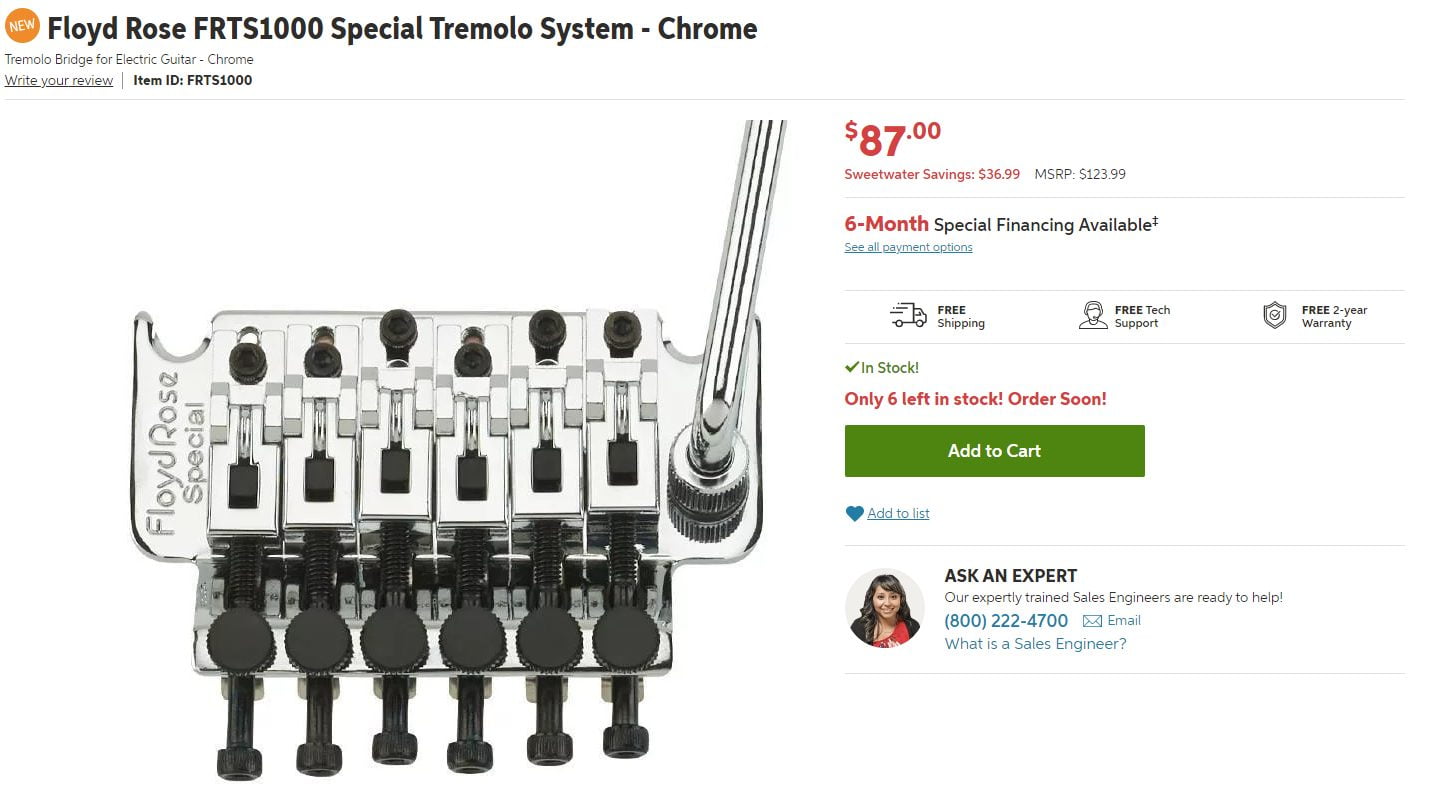 The S series is far cheaper than the FRT series

What's different about the S series?

The main difference we see in the S series - when compared to the FRT models - is the Zinc Alloy material used in the Specials. These are sort of the laminate of the metal world, where you're getting a mixture of metals with a lower melting point, sort of the same way they make soldering wire or tin.

It's not bad, but for the money, we'd rather have the steel units from the main series. We don't recommend going cheap with the Special series.

For something like a floating tremolo, you'll want the best of the best.

Where are the best places to buy a Floyd Rose bridge?

As you've seen by now, we recommend Sweetwater, especially for their repair shop. However, there are other places that are also worth considering.

Amazon also typically has these, but pricing conventions are really hard to pin down there. We'd recommend avoiding places like Amazon and eBay for this type of purchase, just because it seems like sites that aren't musician-specific struggle to understand the pricing system and value of each series.

That usually translates into Specials being priced too high.

How much should I spend?

Which begs the question: How much should you spend on a Floyd Rose?

Since we've consistently recommended the FRT series, we'd say your target price range should be between $180 on the low end and $280 on the high end, with most options coming in around $200 and $250.

If you're spending in that range for an FRT series bridge, you're likely getting good value for what you're paying.

Do you have questions about the Floyd Rose bridges recommended in this article? We try to focus on gear and products that we're familiar with and that we know will be helpful to you, so feel free to reach out and leave us a note in the comments section.

We'll jump in and help out as best we can.

In the meantime, here are some additional articles that might be helpful to you:

18 Guitars with a Decent Tremolo for Less than $500

18 Guitars with a Decent Tremolo for Less than $500