You have a guitar, a computer and you want to get some recording done.

You, and plenty of others.

The good news is that when it's just you and your guitar, home recording is a fairly straightforward exercise. It takes the right gear and some patience but, if you follow along here, I can guaranty you'll be setup to quickly record a high-quality guitar track.

Further, we'll break the entire process down into four steps.

Before we get started, there is some gear you're going to need. Some of it is free (or likely already owned), while some is not. Here's what I'd recommend to get started:

If you have these tools in place, we can turn our attention to configuration and order of operation. The most common arrangement will be the following order:

This means that your amplifier needs to be equipped with at least one output. Having two is a more ideal scenario (since most USB interfaces support a left and right signal) but not critical.

If your amp doesn't have any outputs, you'll need to look into either a preamp or a microphone for your amplifier.

Couldn't I just use a USB microphone and skip the interface?

You can do this and I've actually put together a list of USB microphones that I'd recommend for recording.

However, I don't prefer USB mics for instrument recording because they make it a lot more difficult to do any kind of mixing and instead force you to rely entirely on your amp for volume control.

Having something like the AudioBox as a buffer between your guitar and your computer is the best way to make sure your recording software and amp are getting along as well as possible.

Setting it all Up: Step by Step

Assuming you have an amp with some kind of line level output (even a headphone output would work) here are the steps to connect your guitar to your computer.

Step 1. Setup guitar and amp then set volume levels for each

Before you mess with any other technology, get your guitar figured out first. Set it up as though you had no intention other than to play it straight through the amplifier. Dial in volume on your guitar, your amp and set your amp's EQ.

Here are the guitar and amp settings I'd recommend for recording on your computer:

Basically just keep everything really simple. Once we get the USB interface hooked up, we can put our headphones on and dial in our EQ. As you'd expect, the wiring thus far is simple:

At this point you can use the outputs from the line out on the back of your amplifier to plug into the PreSonus Audiobox, per the following picture:

At this point you'll want to make sure everything is turned on and that your computer recognizes the USB input from the AudioBox. Once you've got your guitar plugged in and turned on, plug in your headphones to the back of the AudioBox.

Step 3. Configure the AudioBox and Audacity on your computer

Now that everything is plugged in, you need to configure your computer to do two things:

I'll cover the steps for both a PC and a Mac, beginning with PC first.

Before you go through the steps, make sure that the PreSonus AudioBox drivers are downloaded and installed on your computer. You can download them directly from the PreSonus website.

Note: This only applies for Windows users and not Mac users as the AudioBox should work automatically, without drives, on all versions of OSX above 10.4.

Once you're certain that your computer is recognizing the PreSonus device, you can set playback and recording volumes via the following steps:

This will tell your computer to play whatever sound comes through the AudioBox, while also telling Audacity to record that sound. At this point, if you set all the dials on the AudioBox to 12pm, you should be able to hear the guitar in your headphones.

If you press record in Audacity, you should be able to see the blue wavelengths showing up on the audio track. Now we can start to fine tune our mix via the AudioBox interface.

Step 4. Mix your signal via the AudioBox

Odds are your mix will be off. Remember, we're recording stereo (left and right) which means we've got to make sure they're (more or less) the same volume. Here's our to-do list before recording:

Our goal is to be able to hit record in Audacity and see something like the following: 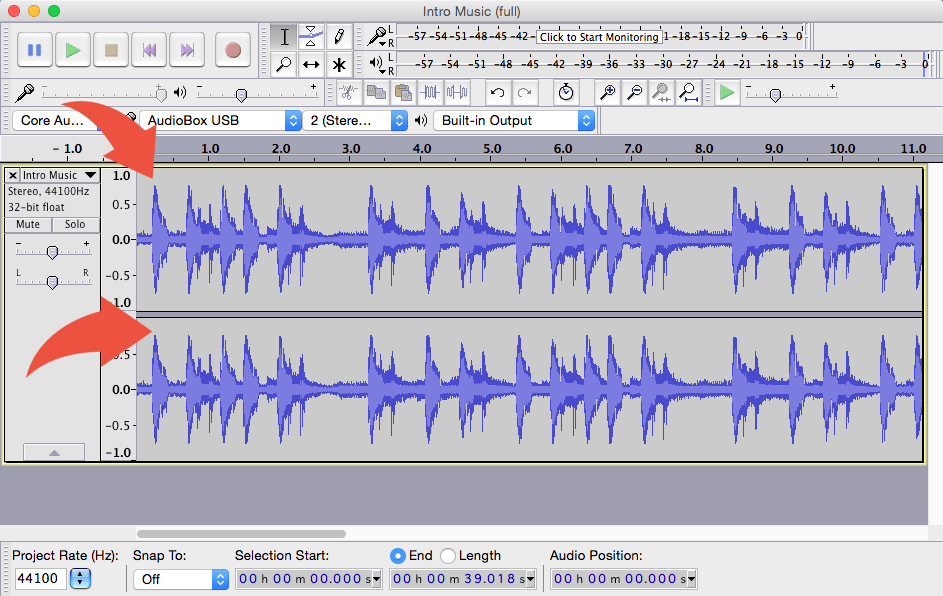 Notice that the wavelengths stop right before the top of each track.

If your signal from the AudioBox is too loud, these waves will be higher in both directions and will cause unwanted distortion on the final recording and in your headphones. So the goal is to get the blue wave to cap off right before it hits the top or bottom of our track.

To start, make sure that your amp is set at a safe volume level that's not going to push too much signal into the AudioBox. In this case, the amp is acting as the preamp while the AudioBox is functioning as a power amp, sending your master volume into the recording software.

Once your amp volume is set (you might have to adjust it as you go), you'll want to set the levels for 1 and 2, the left and right inputs, on the AudioBox: 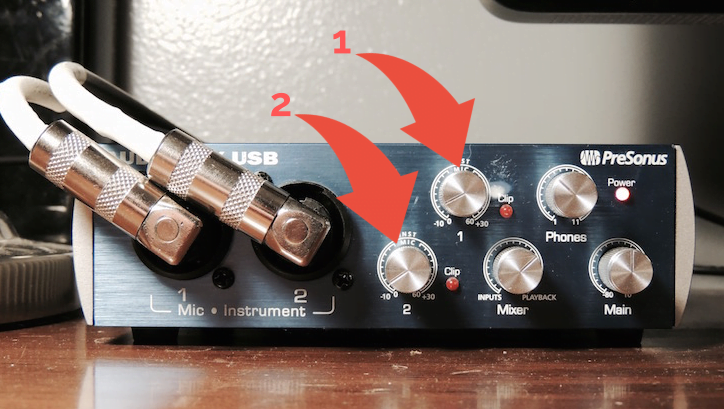 These two knobs send levels to the left and right of your signal. Make sure that they match, or are at least close.

You'll be able to tell by looking at the blue waves in your recording.

Once you have these knobs adjusted you can control the overall output with the MAIN knob on the bottom right hand side of the AudioBox's front panel. Press record in Audacity, strum your guitar and adjust the MAIN knob until you're getting a wavelength that's not clipping. Once you do all this, you can adjust your own monitor via the PHONES knob, which controls the output to your headphones: 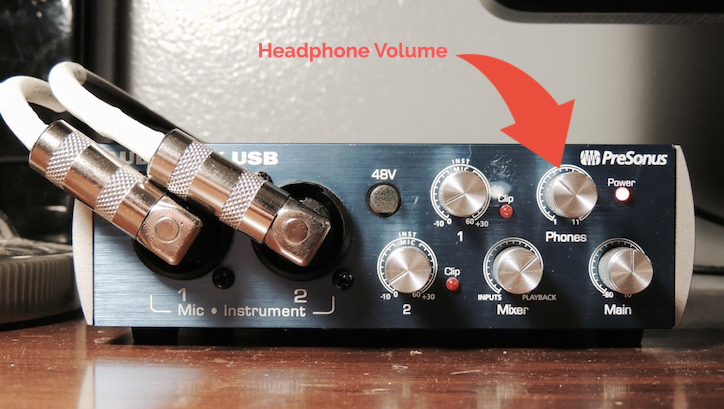 If you're using a track that you're playing back from your computer, you can use the MIX knob to adjust the volume between your guitar and the playback from your MP3: 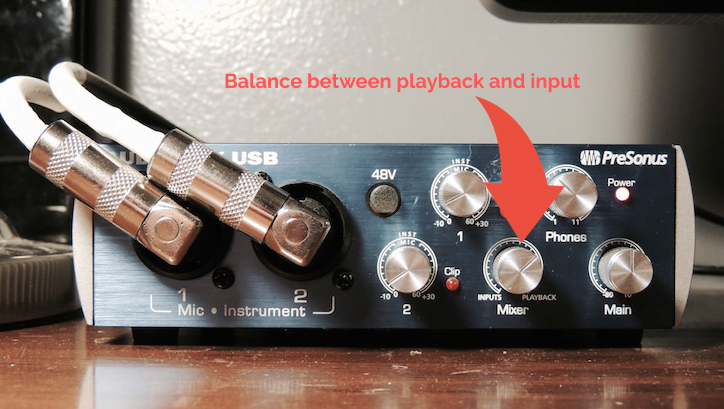 The "Mixer" knob controls the balance between playback (output) and input

If you've done all this correctly, your signal should be properly mixed and read to go, at which point you're ready to hit record in Audacity and get after it.

EQ and Other Considerations

Once this is setup and you're able to record, any other adjustments you make will be largely an issue of preference. There are just a couple best-practices I'd like to mention.

Be careful that you don't push a signal into your computer that's too heavy on the low-end.

An EQ with a lot of bass in it sounds nice when you're playing into the open air but, you'll notice with headphones on and in a recorded mix that it can tend to be a little too muddy and should be tempered.

I used Amplitube 4 with a Fender Vibro-King amp model to dial in the following settings, with BASS at about 5, which worked well and didn't sound too thick:

Fender amp model with settings that worked well for recording

If you want to use these amp models, you can checkout the full version of Amplitube 4 and download a slew of different amps, cabs, speakers and even effects. It's a great tool for those who want to play guitar through their Mac or PC.

If this EQ sounds too thin (the results will depend a lot on your amp and guitar) you can push bass (and even the gain) up at 10-20% intervals until you're either happy with the sound or things start to sound too muddy.

Just keep in mind, sending too much volume into the AudioBox will effectively turn your amp into a massive gain knob and will cause your mix to sound distorted even if it would sound perfectly clean coming out of the amp's speaker.

If you do decide to use a distortion source, make sure that you're matching levels with your clean signal and not creating an unwanted volume boost from the added gain.

Whether it's a dirty channel on your amp or a pedal, you'll want to set the volume to match your clean tone, test the signal than boost it about 5% louder if you do want a little bump in intensity.

As before, just make sure you're not clipping in the recording with the distortion engaged.

It's fine if your clean tone is quieter, but you don't want them to be too far off.

Have questions about this setup or other issues that I haven't address here?

Feel free to give me a shout via email or get in touch via the comments section below.

I'll do my best to get back with you and help out as much as possible.

Written by Bobby on Recording and Guides