Added links to the iRig Pro DUO and Mogami cables on Sweetwater, instead of Amazon. Also corrected several links and updated article formatting.

These days your Mac and guitar can be good friends.

And why wouldn't they be?

There's a ton of great software and applications that you can use as part of your guitar rig to experiment with sounds, and expand your creative horizons, particularly in a home studio environment.

Recording your guitar, particularly on a Mac, has never been easier or more comprehensive.

It takes a little bit of extra gear, a couple free apps and some methodical rigging, but it can be done. Moreover, it doesn't take long to setup.

Here's what we'll do:

I'm assuming you have the guitar and a Mac computer of some sorts (I'm running a Mac Mini). If you've got those items in stock, there are only a couple pieces of gear you'll need to make this work:

What You Need to Connect your Guitar and Mac

Promotional shot of the iRig Pro DUO hooked up to a computer.

Table of Contents (click to jump)
What You Need to Connect your Guitar and Mac
1. Hooking Everything Up
2. Installing a Guitar Effects Processing App
3. Setting Up the App: AmpliTube 4 Example
4. Address Disparities in Volume
5. Let the tinkering begin

The iRig Pro Duo is the most important component, as it allows you to route your guitar's signal through your Mac and to a set of headphones, or your amplifier via the two speaker outputs on the left side of the unit: 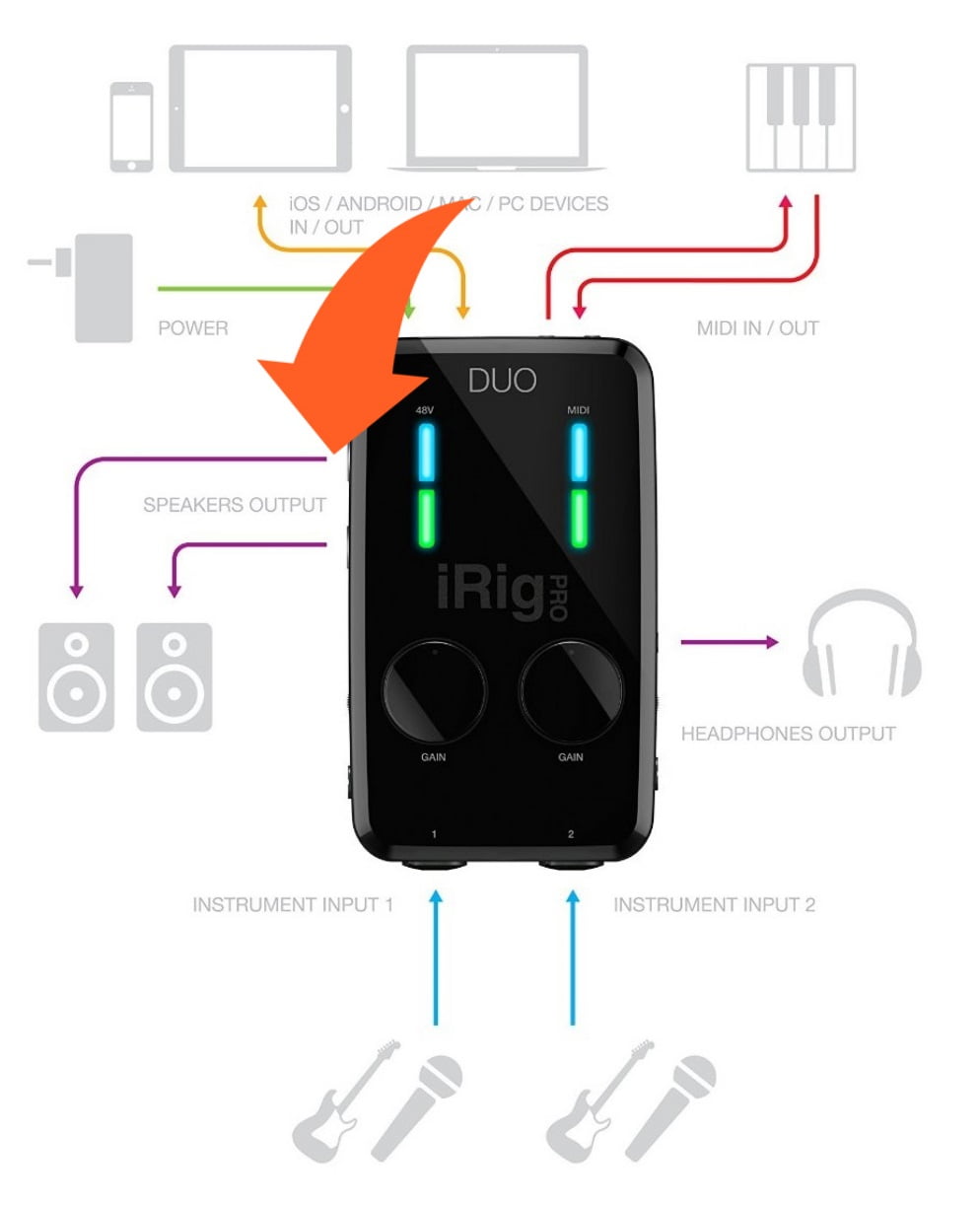 Diagram for routing a guitar signal through the iRig Pro Duo.

You'll note there are two speaker outs, which are typically used to route the signal to two different studio monitors, creating a stereo connection.

If you have a set of studio monitors to use, I'd recommend going that route.

Let's go through the process in a bit more detail.

Note that the Duo allows you to use any mobile device or computer as an effects interface, provided it has the corresponding software.

In testing the Duo, I should mention that I only used Apple products.

While I've heard people say they've gotten it to work with other devices (Kindle, Android, etc.) I haven't personally tried, so I can't say for sure how things work and function with the Duo outside the realm of Apple devices.

Connect your Guitar and Mac Diagram: Step by Step

Start by hooking up your Duo and Mac via the provided USB cable: 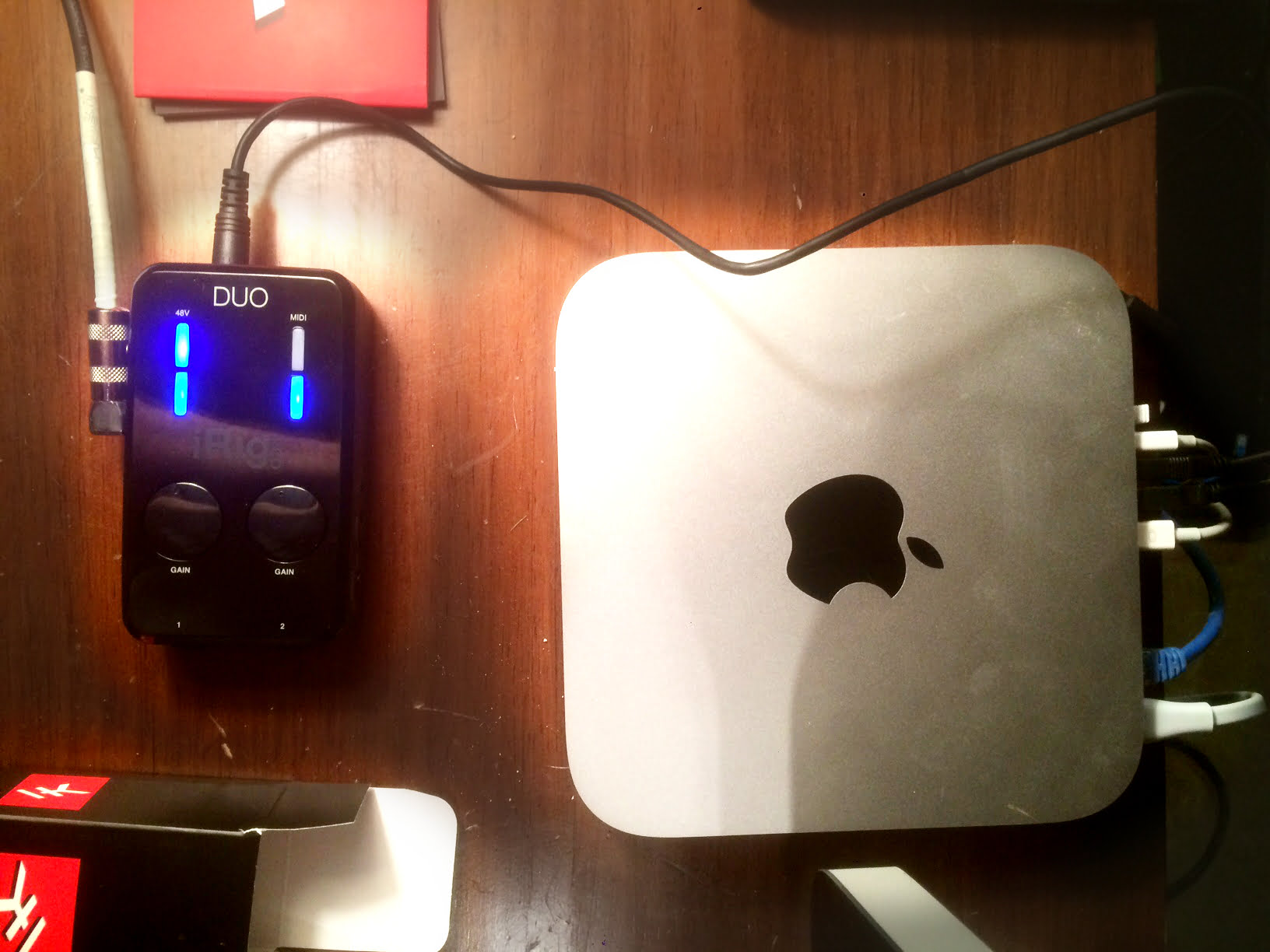 The iRig Duo connected to a Mac Mini via USB.

Once I hooked the Duo into the Mac Mini, it runs off the power from the USB chord and is class compliant with the Mac OS, meaning you don't need to download additional drivers.

Note that the angled white cable is plugged into the left speaker output, which I'll later use to route the signal to my guitar amp, which is filling in as a studio monitor.

There are actually a couple different ways you can do this.

If you have a line out or balanced output on the back of your amplifier (like my Spider IV) you can go from your guitar to your amp then into the Duo's instrument input, which allows you to still use your amp and even a pedalboard in between your guitar and the Duo interface.

Something like an amp and cab simulator pedal could also work, like the Walrus Audio ACS1, pictured here:

Running an output from an amp or preamp pedal like the Walrus Audio ACS1 will also work for getting a signal into the Duo. Just make sure it's a line level output, whether from an amp or a pedal.

In tube amps, or amps without any kind of balanced output, you might need to consider an attenuator. 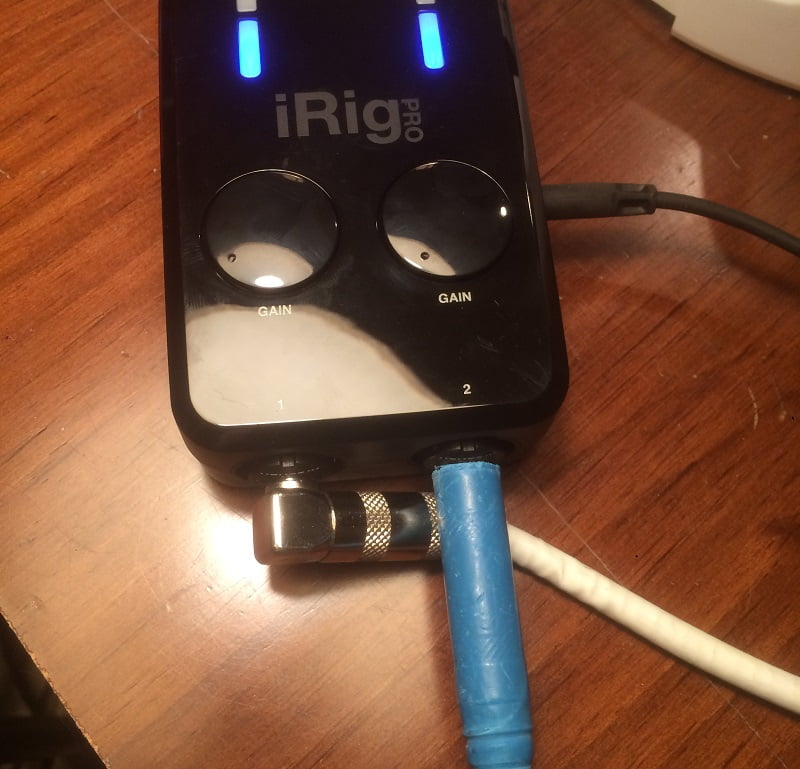 Connect to the instrument input on your DUO

If you have the speaker outs like my amp, you can set everything up the same way. Otherwise, I'd recommend going straight into the Duo from your guitar and either using your amp as a monitor (via the speaker outs I mentioned earlier) or bypassing it entirely. 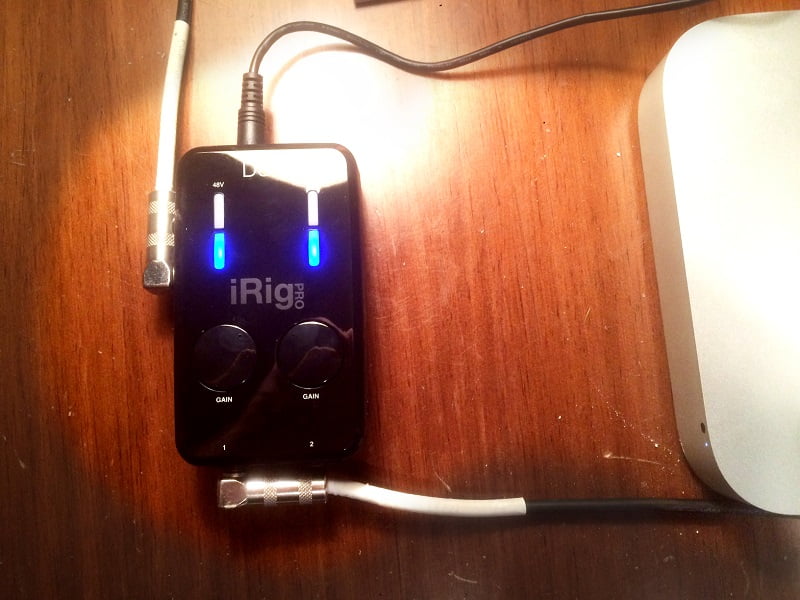 The second angled cable at the bottom of the Duo is plugged into one of the two instrument inputs, which completes our physical connection.

To add headphones, you'll notice on the bottom right hand side of the Duo an 1/8" input called DIRECT MONITOR with an on/off switch.

Set it to ON and plug your headphones in: 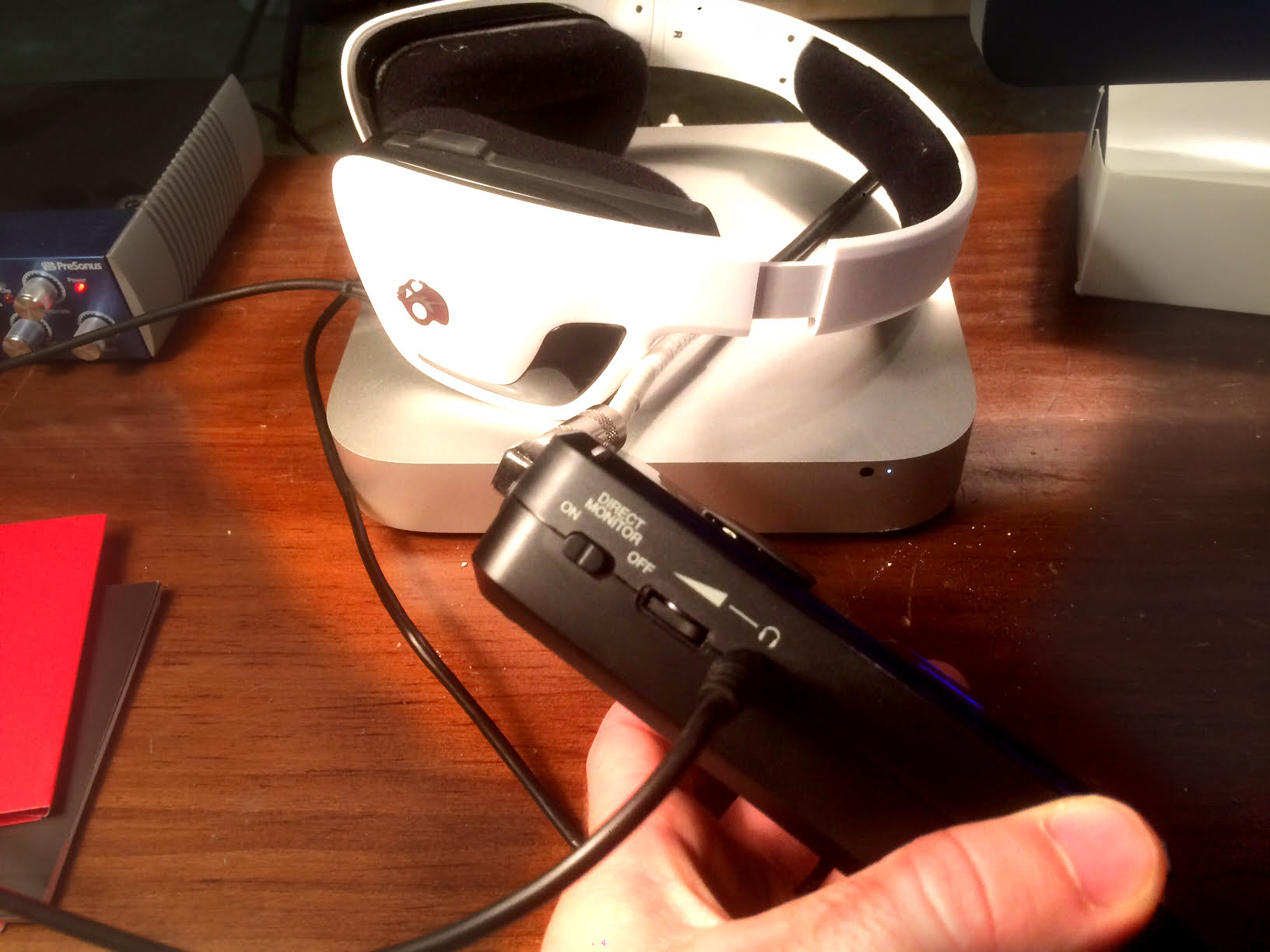 The direct monitor connection with headphones.

And that's it. Your setup is ready to go.

Let's do a quick review:

At this point, your headphones or external speakers (or both) should be functioning as the Duo's monitor, meaning you can now use your Mac as a preamp or effects processor.

Now I can show you how to setup the software using AmpliTube 4.

There are a slew of guitar effects apps available that you can use for your Mac, both free and paid.

The most popular and robust applications include the following:

Most free versions of apps like these will give you a few amp models, pedals and effects to work with, while providing in-app purchases that allow you to unlock a wider range of sounds.

If you're just starting out, they're more than enough to get your feet wet.

Assuming you want to use them long term, most free apps make it easy to upgrade and access a more powerful version.

To get started,I went ahead and installed ﻿AmpliTube 4, since I know my way around that one fairly well. You can download a trial version here if you want to follow along.

3. Setting Up the App: AmpliTube 4 Example

Start the AmpliTube 4 app on your Mac.

The app takes you straight to a screen with an amplifier model displayed, which is the default "AmpliTube" amp brand. I went ahead and switched that out for a Fender Vibro-King.

You can use the AmpliTube Custom Shop (installs with AmpliTube 4) to try whatever amps you'd like.

AmpliTube lets you use them for 72 hours before they ask you to pay up. 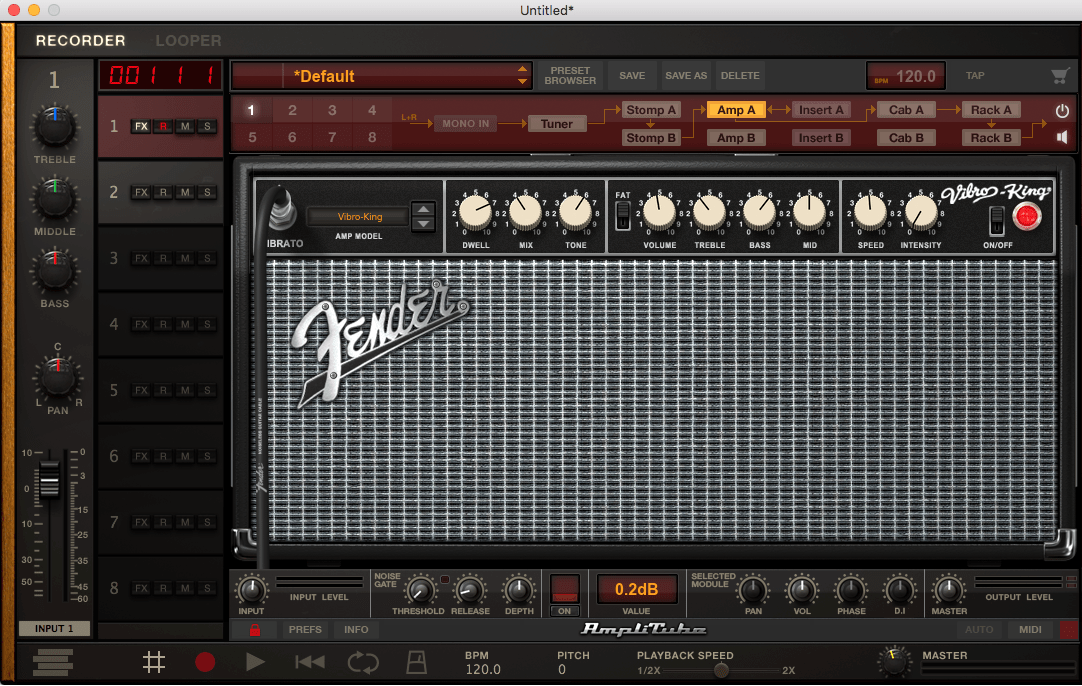 Once you're at this point, we need to make sure that the program is setup to listen to your guitar's signal through the iRig Duo.

To do this, go to "Settings" for AmpliTube 4 and click "Audio MIDI Setup:" 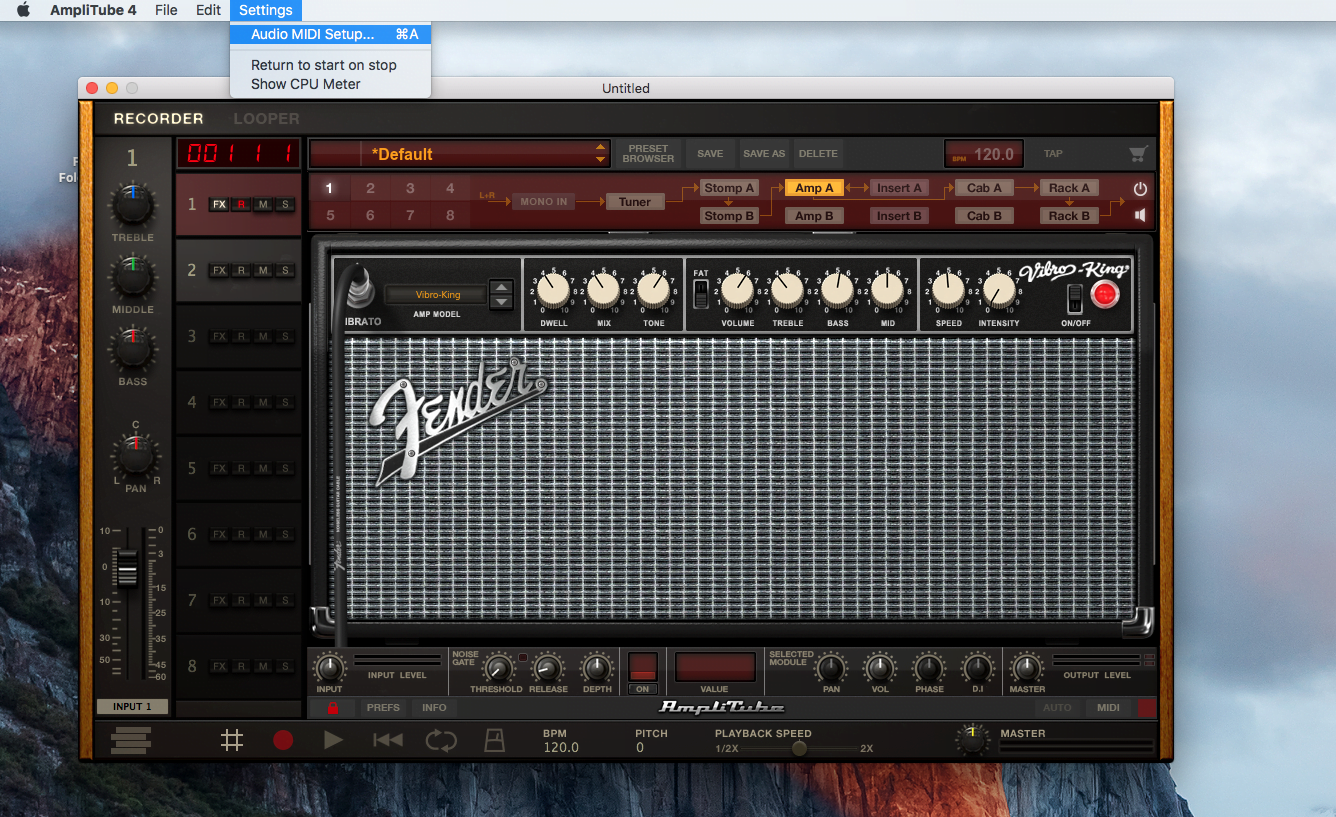 In the following window, make sure that the input and output device are both set to the iRig PRO DUO option, which should be available via the drop down menu. 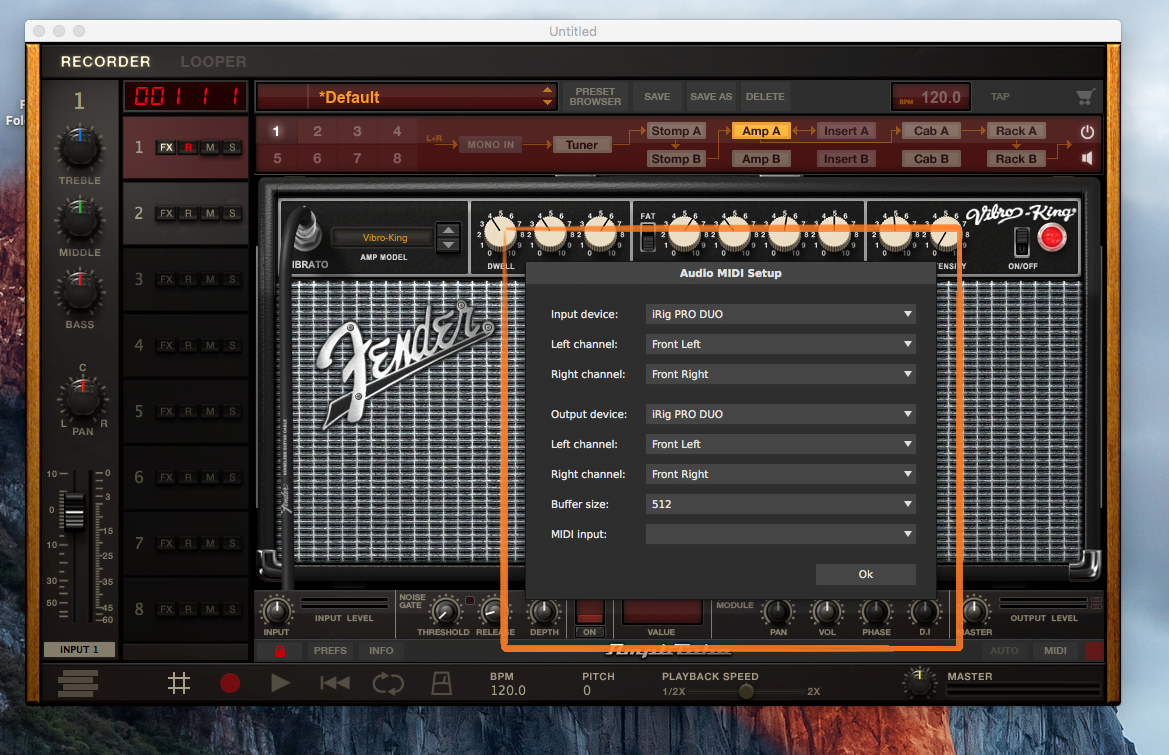 Make sure the iRig PRO DUO is set as both the input and output device.

Once this is set click Ok and you should be able to hear your guitar playing through the amp model. 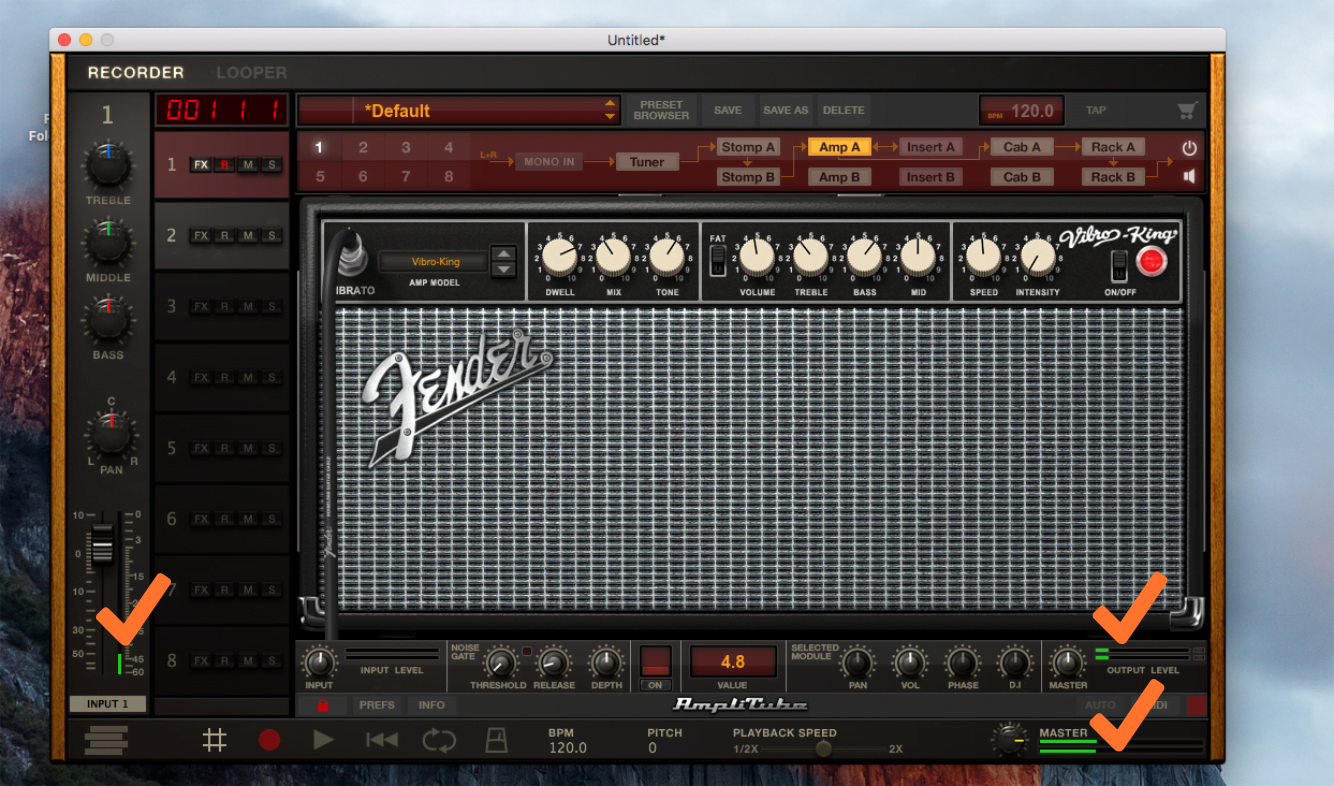 Look for the green signal indicators on the AmpliTube interface.

As you play, you'll be able to see the green signal indicators bouncing up and down. If they're red, that means you're clipping which means you'll have to dial back volume, either on the amp or at one of the mixing points.

You might have to tinker with volume for awhile to get everything right, but it's fairly intuitive and easy to use (more on this later).

For basic recording with Audacity

While AmpliTube does provide recording capabilities, I also want to highlight how you can use Audacity (which is an open source program) to quickly record the signal coming in from the Duo.

Having connected everything in the same manner as before, you'll need to first download Audacity for your Mac, then start the program.

When it opens, the only thing you'll need to change is the recording input device (has the microphone icon next to it): 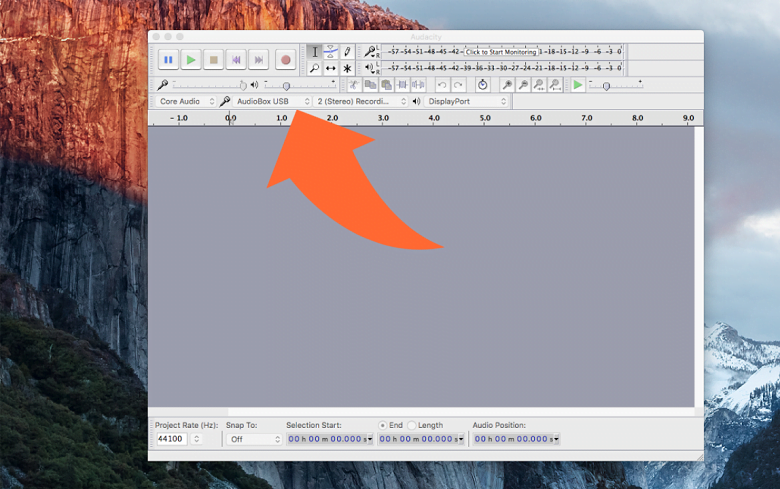 The input setting in Audacity for Mac.

When I pulled up Audacity, the input was set to my PreSonus Audiobox, which I had just disconnected, so I needed to change that to the iRig Duo. 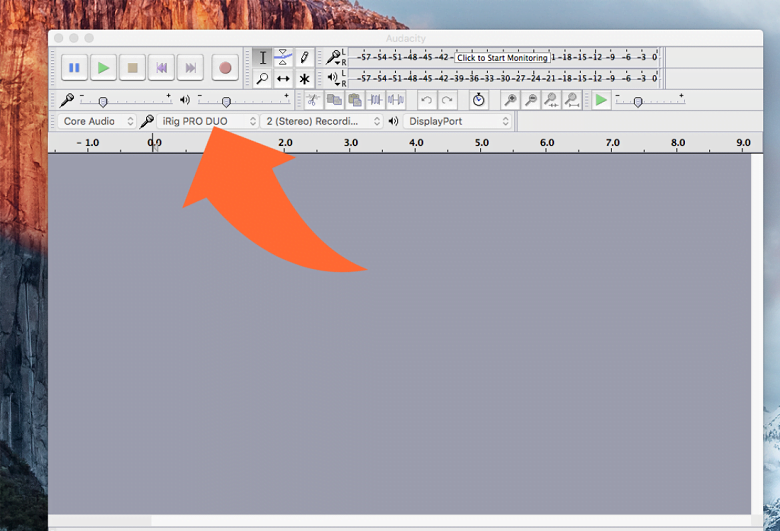 Make sure the iRig PRO DUO is selected in Audacity before you begin recording.

Once this is done you're ready to record in Audacity, just like you would in the Amplitue software.

You need to keep in mind that at this point your Mac is functioning as a preamp, meaning any volume increases from the Mac will be increases in gain once it reaches your amplifier or your headphones.

The difference between gain and volume is essentially that gain occurs only in the preamp section of an amplifier.

You then have final or "master" volume, that occurs in the power amp section.

Thus, volume increasing in the preamp overloads the power amp, which creates the distorted sound (whether it's wanted or not). This means that too much volume from your Mac, either the AmpliTube app or the computer itself, will create unwanted distortion in the same manner.

What we need is for our Mac to be fairly median when it comes to volume, allowing us to use our amplifier as just a power amp.

If you just use headphones (or studio monitors) this process is a little more straightforward.

Where should the Mac (AmpliTube 4) volume be set?

With the AmpliTube suite and most effects/amp modeling software, I found that leaving the output for everything around 50-60% was the most ideal way to set things up for my headphones (this even worked well with my amp).

The settings from the previous image I showed you are pretty close to what I ended up using:

Shot of AmpliTube 4 volume settings that worked well for me.

Note that I have the master volume, in the bottom right hand corner, a little higher. This is where you can have some added flexibility, since it's controlling the overall mix. As I mentioned, just watch for the red bars that indicate you're clipping.

If those show up, it's time to cut back.

My advice is to start with everything at 50% and then move volume up until you start to hear unwanted fuzz or distortion.

Stop there, and cut back about 5%.

Then you can use your amp's master volume, or the volume control on the headphone input, to control overall output.

Assuming you're okay with the volume settings, everything should be ready for you to start tinkering with some of the features in AmpliTube 4 or your DAW of choice.

Try some of the different effects and amp models.

Most of the apps will allow you to buy other effects packages, which might be worth tinkering with if you like the setup and want to use it in the long term.

Play around with it until you find a few things you like.

What did you come up with?

What kind of sounds are you getting out of your guitar/Mac rig?

Let us know in the comments section below.

If you've got other ways to set up the iPad, iPhone or Mac processors, I'd love to have that in the comments as well so others can benefit.

Written by GC Editorial on Headphones and Roundups

Written by GC Editorial on Recording and Roundups