It's cost prohibitive for some, but the GK Pro Negra's intended market of formally-trained and/or professional guitarists shouldn't expect to pay much less. The beauty of this guitar, playability, and tone quality (through preamp or open air) check off all the boxes I'd want to see. An instrument of this caliber is truly a work of art.

First, I want to preface this review with some transparency.

I am not a classical guitarist, nor am I formally trained. In fact, testing this guitar was one of my first ever forays into nylon strings, and certainly challenging for me. Having said that, getting to play this guitar has also been a great experience, and I think for those that are in the classical music space, the Pro Negra a fantastic option.

In my review of the Cordoba GK Pro Negra, I'll cover the entire experience, all the features and my take on the guitar's value in particular contexts.

We partner with retailers like Sweetwater and Reverb to support our site and avoid intrusive banner ads. That means we're reader-supported by folks like you, who use our orange button links to conveniently shop for gear. It costs you nothing extra, and helps keep us going. Win-win.

Compare to Other Cordoba Acoustics

We'll start with a simple comparison table that allows you to pit the GK Pro Negra against a couple additional popular guitars that Cordoba make. The C10 and the C12 are both similar alternatives to the Pro Negra.

A clip of the GK Pro Negra in front of my amp and my wife's laptop. More photos below of the full instrument.

In this section we've included a full compliment of live pricing tools to see updated cost and compare from multiple vendors. The price history and alert tools follow Sweetwater retail. Note that we do not do price alerts or track price history from Amazon.

IDEAL FOR: Formally trained and semi-pro/pro classical guitarist. The preamp also makes it a solid option for recording studios.

The strings on this guitar were all nylon, but the three lower strings (the three thickest), seem to have some kind of winding that give off more grit and some added definition to right hand movement.

It was smooth, but also kind of edgy, which I really liked.

Not surprisingly, it seemed more at home with arpeggiated fingerpicking than anything else, while simpler chord strumming felt a little bit out of place.

With any acoustic guitar I'm looking to see how it sounds campfire style (not that I'd ever take a guitar of this caliber to a campfire). But how does it play when it's hooked up to absolutely nothing?

For such a soft touch, the Pro Negra has a lot of projection and with some nice sustain on the lower register. As you get higher on the fretboard, the sustain shortens a lot but that's typical with most acoustics.

For a concert-style body, the sound does a good job of filling the room.

There's an internal mic and pickup (more on that later), which has a fade (mix) between the two, so you can select all pickup or all mic. On the mic side it's really brisk, and seems like it picks up more definition in your hand movement. Finger scrapes and sliding were more pronounced.

It wasn't bad at all, but I didn't like it as much as the pickup, nor as much as an external microphone setup in front of the sound hole, which I also tested.

The pickup is a lot more similar to the natural sound of the Pro Negra. I tested it through both an acoustic and an electric amp, and the sound of both was surprisingly similar.

This suggests to me that the Pro Negra is doing a solid job overall of maintaining its natural tone, regardless of the medium used to project it. 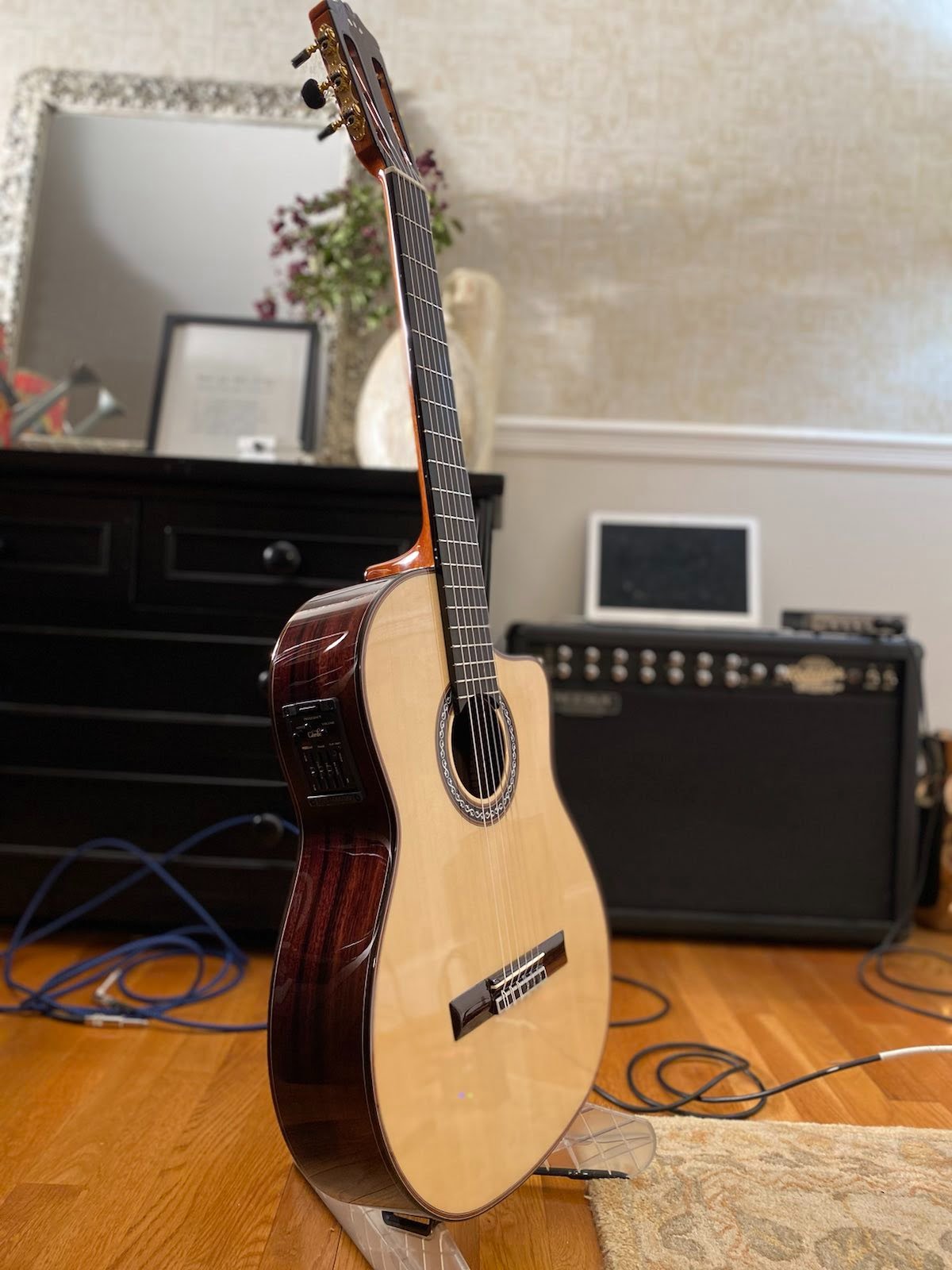 The Cordoba GK Pro Negra hanging out in my living room.

Even without the mic sharpening things up a bit, right hand definition is surprisingly prominent in this guitar. Sliding and finger scrapes are easy to draw out and put emphasis on, especially during a recording. In fact, subtle scrapes caused the biggest amplitude spikes in the track I recorded (used for the embedded YouTube video).

For most of the testing process - while amplifying the guitar - I used a small amount of reverb. To me, this sounded like a nice layer, although I also felt like it didn't really need it. The guitar is so mellow and smooth on it's own that I eventually turned the reverb all the way down and just let the guitar do its thing.

Perhaps regrettably, reverb is used for the duration of the audio demo I recorded.

The pickup system is a Fishman Prefix ProBlend, with bass, treble, and contour controls. Additionally you have frequency, notch, and overall volume output on the top of the panel. This is about as flexible as onboard acoustic preamps get, with the exception of a tuner missing, which didn't really matter to me.

Here's a closeup shot of the preamp in the Pro Negra: 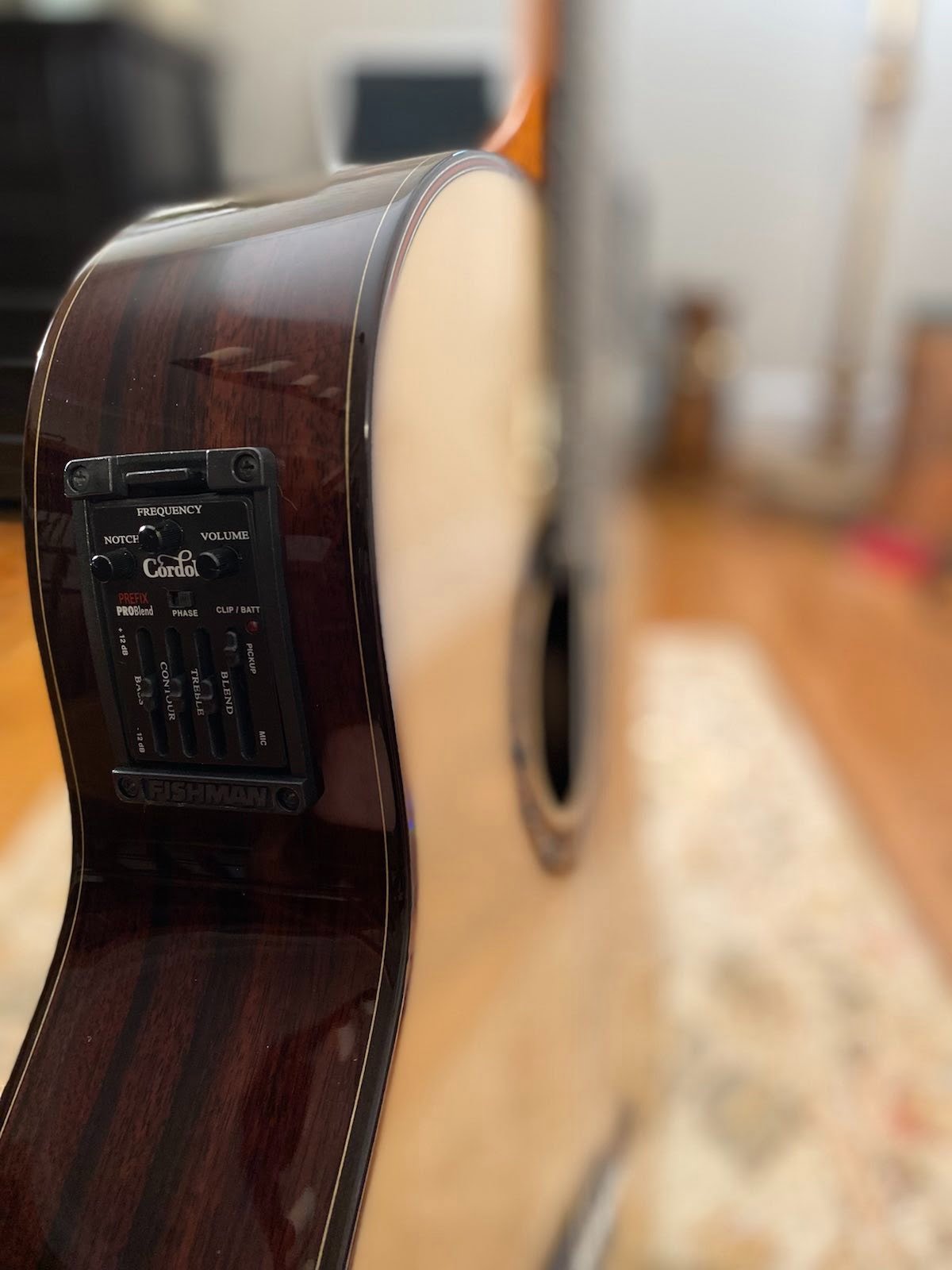 The Fishman preamp system on the Cordoba GK Pro Negra is about as advanced as you can get, though without a tuner (not a big deal).

Between the two-band EQ, contour, and frequency controls, you have all the flexibility you could hope for in an onboard preamp with limited space (you don't want to cut into the guitar's body too much). Extended tweaking should be done from a pedal preamp or a proper acoustic amplifier.

We've already touched on this a lot so I'll keep it simple, the mix control has "pickup" labeled on one end and "mic" on the other. Slide it to either side to choose one, or keep it right in the middle to use both.

Solid back and sides, from high grade cuts of lumber, are expected in a guitar of this price range, which we have with the Spruce and Rosewood combination. There's also a nice smoothness and "soft feel" to the body, as well as really attractive binding and sound-hole art.

It feels easy to hold, and I definitely liked the cutaway which gave you an additional reduction in size and a boost in playability.

It's not supposed to be a smaller guitar, but it definitely felt easier to hold than my Taylor 114ce, which is also a concert body style.

As we'd expect in a classical guitar, the neck is fairly wide measuring 1.96" at the nut position. If you're not used to classical guitars (which I'm not) you might find it a little challenging at first. But again, trained classical players or those that are used to these fretboards will have no issues.

Like the rest of the guitar, the fretboard plays smooth and looks great.

Again, nothing to complain about.

The Cordoba GK Pro Negra was retailing around $1900 at the time of writing this article (check the price tools above to see if this has shifted). That's too high for beginner or even early intermediate players (unless you just have cash to burn), but not a bad price for those on the more advanced side of their playing career, wanting to invest in a great classical acoustic.

As quality goes up and price goes down, value increases, so we're looking for guitars that balance out the two.

The Pro Negra hits a comfortable balance between quality and cost. 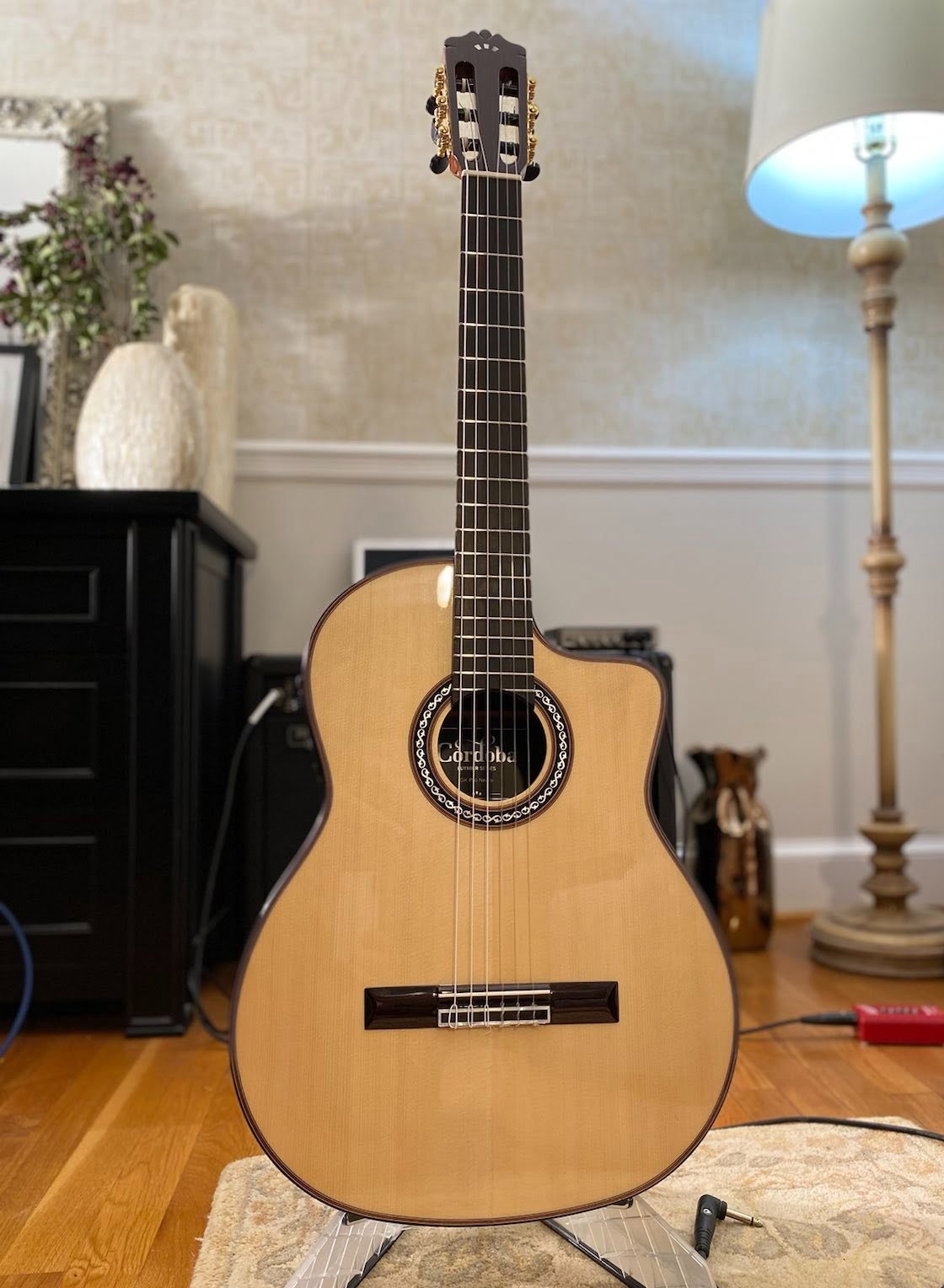 Expensive, but with good reason. There's little to complain about with the GK Pro Negra.

Upper level intermediate players who are looking to focus heavily on the classical guitar style (and can swing the price tag), will be well-served by the Cordoba GK Pro Negra.

And as we've already touched on, formally educated classical musicians and professionals, particularly in the studio/recording business, should consider it a great investment.

Or maybe you just want a nice classical acoustic that sounds great in your living room.

The Pro Negra has a lot of useful contexts.

Getting some experience with a classical acoustic has been fun for me, especially given what an incredible instrument the Cordoba GK Pro Negra has turned out to be. And even if I were to try and nit-pick this guitar, there's just nothing to complain about.

It's definitely an editor's choice in our database.

If you have questions about our Cordoba GK Pro Negra review, drop them in the comments section below and I'll help out.