In this roundup I'm putting together a simple list of delay pedals with tap tempo built in, usually in the form of a clickable switch or button on the front of the pedal. This means you can control delay time with your foot, instead of having to make changes on the fly by hand.

In my opinion, this is one of the most underrated delay pedal features.

Most of you looking for a tap tempo in your delay pedal already know what to look for, though I'll review some basic functionality of this feature, just in case you need a quick refresher.

Table of Contents (click to jump)
How Tap Tempo Works with Delay
What this list is for
List of Delay Pedals with Tap Tempo
Recommendations for Certain Situations
Do I need the tap tempo feature?
Is a tap button more common in digital delay pedals?
Other Important Features to Look For
Anything to add?

How Tap Tempo Works with Delay

A delay pedal will have a tap tempo for the purpose of adjusting a delay's time. This means that as you click the button multiple times, the delay pedal follows a corresponding repeat pattern. Here's how it works:

Some delays will also allow you to change something called a timing sub division. This means you could adjust your tap tempo by quarter notes, eighth notes, or even the popular dotted eighth note.

This demo video by Jim Dunlop is a great example of how you might use a delay pedal with both the tap tempo and timing subdivision features:

For this list our goal is curation and not necessarily a review or rating for each delay pedal we include. We're just trying to list delay pedals that have a tap tempo button, and make it easy to browse all of them at once.

If you're interested in a broader list and guitar effects summary, checkout our guitar pedals parent page.

Without further ado, let's get to the actual list.

We recommend buying guitar gear at Sweetwater, which is why we both partner with and link to them via the orange buttons below. These links help support Guitar Chalk, but at no extra cost to you. A simple way to support what we do is by shopping via these links. Otherwise, just enjoy the content.

In each section, I'll choose a pedal from the above list that I believe best suits that particular situation. If you have additional questions, feel free to get in touch via the comments section below.

Keep in mind, these are suggestions that I'm making largely from personal experience. Thus, they are extremely subjective and not necessarily meant to be a "gospel-truth" type of recommendation.

At the same time, I've used and tested a lot of delay pedals in my short 34 years on this planet, so I have plenty of thoughts as it relates to their context and quality.

Which one is best for live performances? 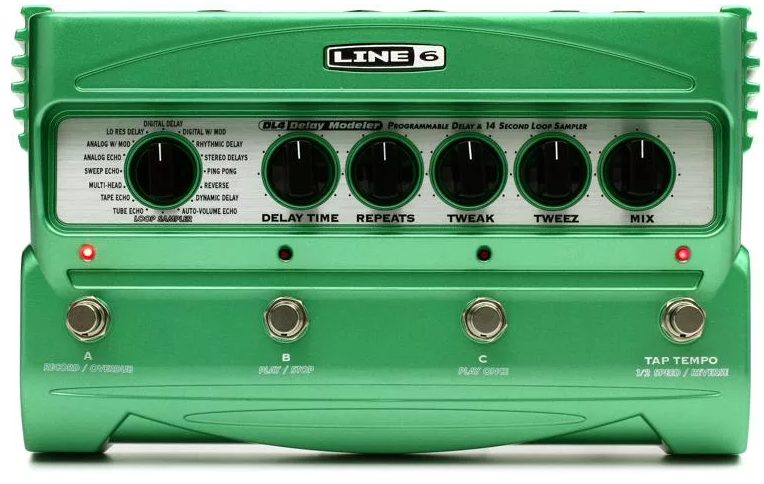 This is my delay pedal of choice.

I've always used it for live performances because of how simple it is to setup and use. With the first three buttons you have one preset each, then the tap tempo all the way to the right controls delay timing.

My Line 6 DL4, hanging out on my dining room table.

It's not a ton of presets, but it's all hands free, which can't be said of many delays that have way more presets.

For live shows, and particularly for playing in church, the DL4 has always been my go-to.

Which delay would you pick if you were prioritizing true bypass and analog circuits? 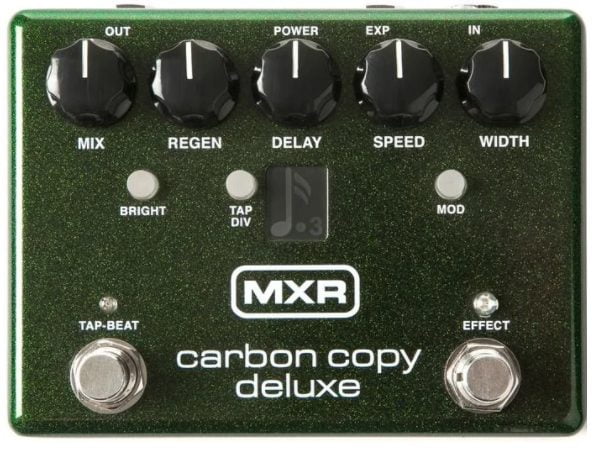 The MXR Carbon Copy Deluxe is an analog delay pedal with tap tempo.

If you're intent on getting an analog delay with true bypass, we've mentioned that it's hard to find one with a tap tempo. However, several on this list do provide such a grouping, and we'd recommend specifically the MXR Carbon Copy Deluxe.

At $199 retail it's one of the cheapest analog delay pedals on the market that also provides the flexibility of a tap tempo and a timing sub division button.

For those who want the tone of analog but the control of digital, the Carbon Copy Deluxe is one of the best places to land.

Which one is best for recording? 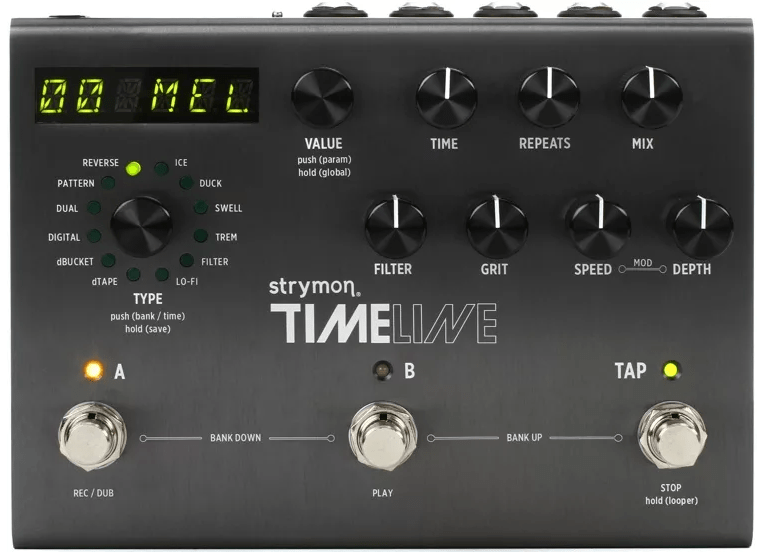 The Strymon Timeline is an advanced digital delay pedal that's great for a wide range of situations and playing styles.

The Strymon TimeLine is one of the most versatile and involved digital delays available, giving you complete control over every aspect of your sound. For guitar players that do a lot of session or studio work, we'd recommend it for that tonal flexibility, lots of available presets, and plenty of delay modes (algorithms) to choose from. 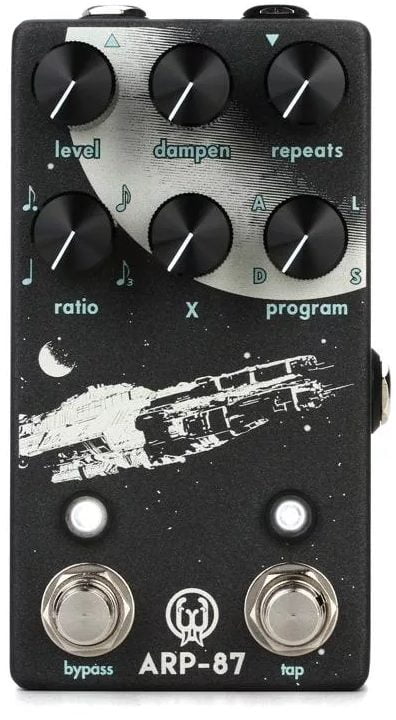 The Walrus Audio ARP-87 and the MXR Carbon Copy Deluxe are both $199 new, which is one of the lower prices you're going to get on a list like this.

Both of these pedals have a tap tempo control and we like both of them for folks who are trying to buy the highest-value option. If you want to knock down the cost of your investment a little more, Reverb usually has these pedals used, cheaper.

At any given time there should be plenty of the Carbon Copy Deluxe pedals on hand.

Below is a live price history graph for the Carbon Copy Deluxe, which is linked to its Sweetwater entry:

Here's the same graph for the Walrus Audio ARP-87:

Particularly with used options available from places like Reverb, these two pedals are probably going to give you some of the lower price points, around $200. Though admittedly, $200 can feel like a high price in certain contexts. Yet, it's not necessarily an unusual price tag for a new delay pedal.

We would just argue that the CC Deluxe and the ARP give you the most quality and value for what you're paying.

As always, buy based on your own budget and discretion.

Do I need the tap tempo feature?

I've owned delay pedals with and without the tap tempo feature, and I can tell you with certainty, having that button available is one of the most helpful upgrades you can have. To be sure, you can use a delay and ignore the timing/rhythm aspects of it, but if you want to use your delay or echo pedal to compliment rhythm, you must be able to dial in the tempo on the fly.

For my own board, I never even considered a delay pedal unless it has an easily accessible tap tempo button.

My argument would be that if you need a delay pedal, you need the tap control to go with it.

Can I save money by avoiding delay pedals with tap tempo?

In most cases, delay pedals that come equipped with a tap tempo button are going to be more expensive. Digital delay pedals are usually cheaper, and more often they include a tap tempo control.

In analog delay pedals, tap tempos are less common, though not unheard of.

Either way, if you're trying to save money on a delay pedal, we wouldn't recommend trying to cheap out on this particular feature.

Additional Areas You Can Cut Costs on Delay pedals

In other words: If I had the choice between an analog delay pedal with no tap tempo, and a digital delay with the tap tempo, I'd be fine going digital.

Is a tap button more common in digital delay pedals?

It's far more common to see a tap tempo button in a delay pedal with a digital signal processor, as opposed to the analog circuits.

This is because analog delay pedals - while prized for their tone quality and originality - are notoriously more difficult and expensive to produce. Many of the boutique guitar pedal builders put them together by hand, thus charge more because of parts and labor.

However, that doesn't mean tap tempo buttons don't make their way into analog delay pedals. They aren't as common, but you can find them.

Other Important Features to Look For

For some buying help, I'll list some other features (aside from tap tempo) that you should look for. First, a few of the basics:

Getting the sub-division control could be considered optional, but it's nice to have. Almost like having a different kind of "mode" selector to choose from. Here are some more advanced, call them "bonus" features:

All of these are great features to have in a delay pedal, but we certainly wouldn't consider them crucial. Nor would we put any of them above the priority of having a tap tempo button.

For the most part, a true bypass connection - while nice to have - does not impact your use of the tap tempo control one way or the other. True bypass is entirely related to how a pedal passes signal when that particular pedal is off.

If the pedal is off anyway, the tap tempo and the true bypass connection will never cross paths.

You can have great delay pedals both with and without true bypass.

Do you have questions about the delay pedals we've listed here, or something else about tap tempo controls?

If so, leave them in the comments section below.

We'll jump on and help out as much as possible.