In this lesson we're going to answer a simple question:

What is the E minor pentatonic scale and how can you use it on the guitar?

This article is geared towards beginners or at least those who don't understand the pentatonic scale and how it works. However, intermediate guitar players who might focus more on chords and rhythm, will benefit as well.

This is primarily a lead guitar lesson, with a heavy focus on music theory.

First, we'll answer our question in a simple form.

What is the E minor pentatonic scale?

The following diagram shows the five notes of the E minor pentatonic scale in a guitar scale diagram: 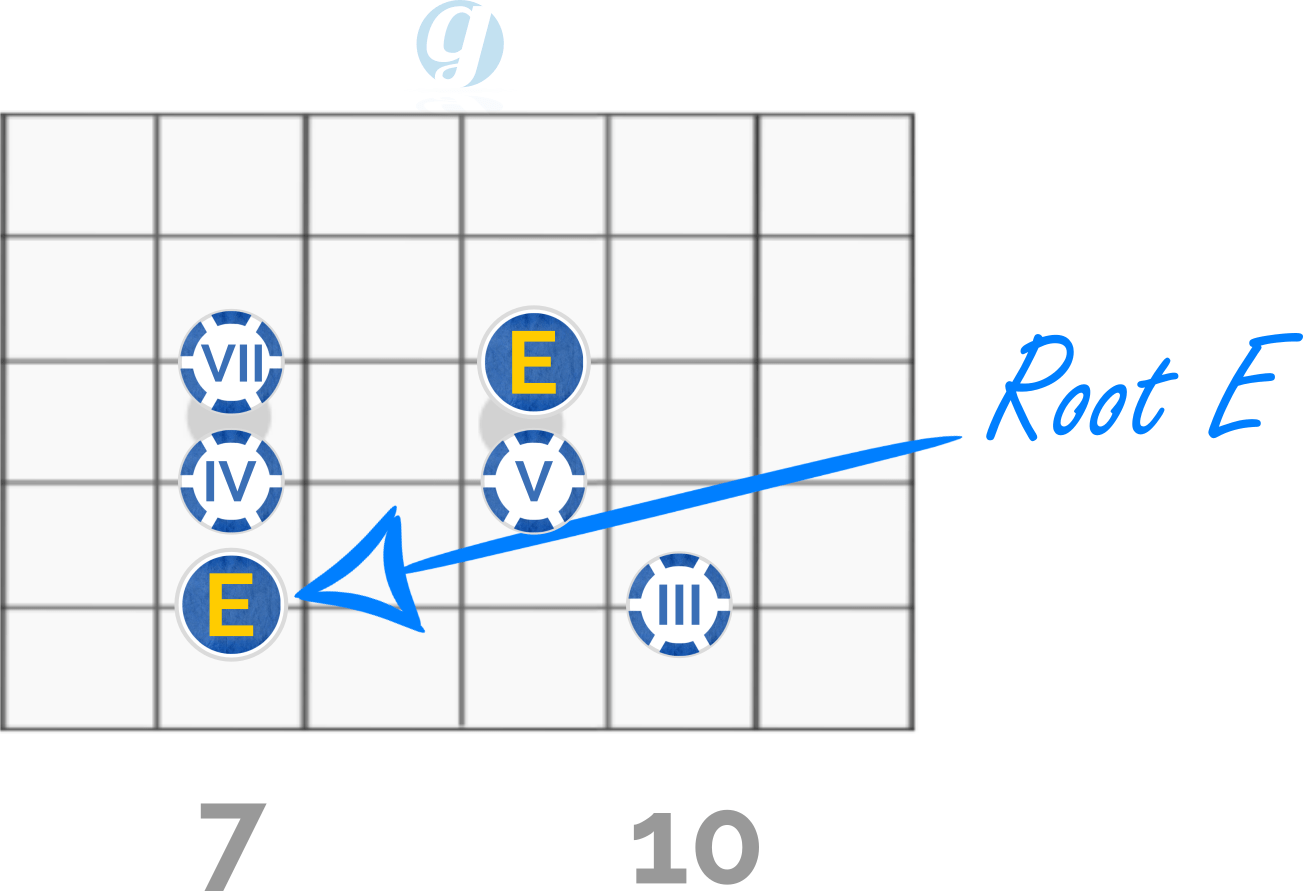 The root E is where the pattern starts, giving the scale its "key" or letter value. The scale degrees - III, IV, V, and VII - give us our minor pentatonic designation.

Here's how that pattern would look in guitar tab form:

While we've highlighted a segment of the scale, the pattern established will repeat itself in both directions, eventually giving you a pattern that takes over the entire fretboard and is somewhat overwhelming to look at.

Here's what the E minor pentatonic scale looks like if it were allowed to continue the length of the fretboard in both directions.

The E minor pentatonic scale extending both directions over the length of the fretboard.

However, when it comes to using it on the guitar, you only need to select a single segment or form of the scale, like we did in the previous example. From there, you can use the scale as a structure for improvising and developing your own solos or melodies, particularly for blues and rock.

Here's another example of an E minor pentatonic form that you might use on the guitar, which is expanded with a few more notes than our previous example. It's still a small segment, but it gives you more mileage to work with.

This version starts at the third fret on the low G, though the root note of the scale is still E, since we're focusing on E minor. 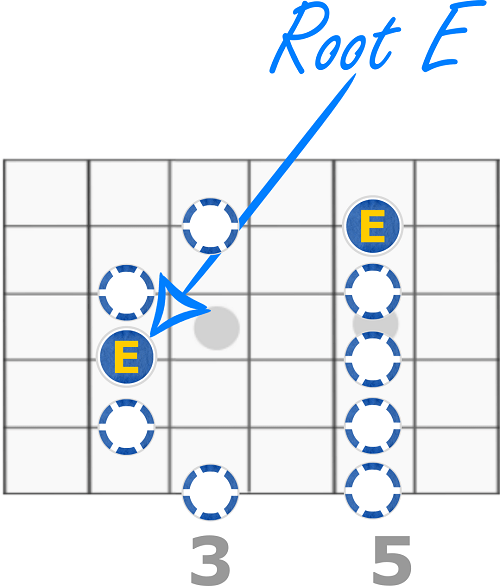 Another example of a segment drawn from the E minor pentatonic scale that can be easily played on the guitar.

These forms sound a little strange until you start playing around with them and adding some of your own technique like bends and tremolo. This particular form of the E minor pentatonic has a lot of lower notes to work with, so it's a fun one to use when you want to build heavier, darker melody lines.

The open form is one of the easiest ways to play the E minor pentatonic scale. Here's the diagram with notes between two octaves. 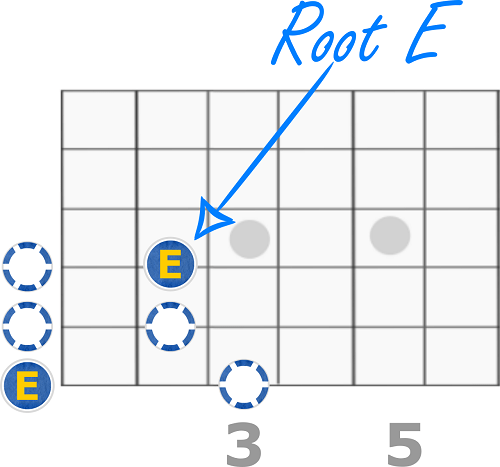 Diagram version of the open form.

And the guitar tab version of the diagram:

If we extend this scale to the higher register (the thinner strings), we get a larger scale diagram like the following: 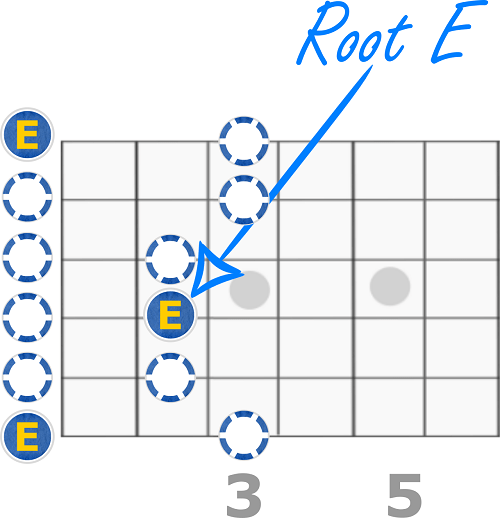 Here's the corresponding guitar tab for this larger version of the scale:

Here's another segment of the E minor pentatonic, this time pulled from its form on the eighth fret. We'll go back to the smaller octave to octave segment, focusing on just five notes. 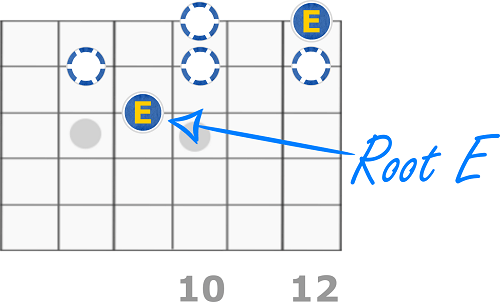 Diagram for the eighth fret form of the scale.

Though this is the eighth fret form of the scale, the root note is positioned at the ninth fret, with most notes falling on the 10th and the 12th fret if you draw it out to a fuller form.

I won't do a full diagram for this one, but here's a screen grab from all-guitar-chords scale tool:

Segment of the E minor pentatonic scale in the eighth fret form.

Learning the Theory of the E minor Pentatonic Scale

Regardless of key, a pentatonic scale can be written in scale degrees like this, which assumes a major key:

This means you take the first, minor or "flatted" third, fourth, fifth and minor seventh of whatever key you want your pentatonic scale to be in, E major if you use that particular formula.

In our case, we're looking for a pentatonic scale in the key of E minor.

That means we need to examine our E minor scale and pull the first, third, fourth, fifth and seventh notes:

The notes highlighted in red all fit our formula.

Now that we have these notes, we can find a root E on the fretboard, then plot the rest of the next four notes to get our scale. Here's how I build the diagram, starting at the E note on the fifth string at the seventh fret, which you might recognize from our first example.

As you can see, we've followed the notes of the scale from the low E to the high E, giving us four total notes within one octave. Here's the same pattern in guitar tab form:

Tab version of the E minor pentatonic scale at the seventh fret position.

From a music theory standpoint, this completes our E minor pentatonic scale with five notes total, six if you count the additional octave. What if we wanted more notes to work with?

Expanding the Scale from the Seventh Fret Position

You can see that this scale could extend linearly in either direction. Take the following diagram, for example:

The exact same scale can be "straightened out" and played in a linear line on one single string, making it easy to expand the same five notes up or down the fretboard.

You can see that if we want to continue the shape above the seventh fret position, we can simply build into the same scale by moving up to the same notes within the E minor pentatonic scale. They can continue in either direction, as long as you have more frets to work with.

Expanding the E minor pentatonic scale in our guitar diagram.

We can add the root E note at the 12th fret and section them off to illustrate how they could fit together.

Two forms of the E minor pentatonic scale sectioned off and coupled together with roots at the seventh, ninth and 12th frets.

You could say the above diagram incorporates three different forms of the E minor pentatonic scale into one fretboard shape. The seventh, ninth and 12th fret forms of the scale are all being combined into one shape, give you a substantial grid of notes from which to improvise.

While you could continue building the scale in either direction, let's take this segment and work on some improvisation.

As you get comfortable with the theory and the scale degree patterns we showed you earlier, it'll get easier and more intuitive to add notes and expand the shape. This should happen naturally as we work on improvisation with the E minor pentatonic scale forms we've come up with so far.

While improvising, we'll be putting the following concepts into practice:

Since scales in and of themselves are not creative or uniquely melodic, we can use them as structural boundaries to build melody within a given key. I'll first start with the root note and move a couple degrees up the scale with some bends and vibrato. Despite being only three notes, there's a lot you can do with this shape once you add the variety provided by applied technique. In this example I do a full bend at the G (G bends to A then back again) and a slight vibrato on the A note at the seventh fret. Let's try a similar tactic moving up the fretboard. Similar improvisation with bends and staccato notes, all between the 10th and 12th frets.

Now, we can expand our pattern and move up the fretboard through the 12th and 14th frets, sticking to the established note sequence:

We can use the scale structure to develop a blues-style run from the 12th fret on the sixth string all the way up to the 14th fret on the first string.

Repeating the Process at a Different Fret

As you can see, there are plenty of different forms and variations of the E minor pentatonic scale that you could apply. You can repeat the process we've outlined here at any of those segments. For example, say you wanted to build an E minor pentatonic improvised melody in the open position. You would use the following segment:

You can use any segment of the E minor pentatonic scale to repeat the improvisation process.

Once you have a segment of the scale selected, you can go through the following steps to find a manageable improvisation sequence:

When you look at a scale diagram that spans the entire fretboard, it's difficult to use or even make sense of that much information. This is where knowing the theory of the E minor pentatonic scale comes in really handy, because it tells you that an actual pentatonic scale is only five notes. A best practice for learning and teaching this scale is to simply start with those five notes and learn how they're derived from the key of E minor.

Once you know how to do that, you can find those notes anywhere on the fretboard where you're able to locate a root E note.

These are some of the most common forms and segments of the E minor pentatonic scale guitar players can use. They're easy because they are short, and not as overwhelming to look at as the full fretboard versions. On piano, longer scales are a bit easier to digest because you can only move in two directions.

However, on guitar, you can move in one of four directions which makes a full-length scale difficult to digest when you look at it on a fretboard diagram.

In the case of the E minor pentatonic scale, it can easily be broken down into these smaller segments and used for improvising in blues, rock, or a variety of other musical styles.

What other forms of the E minor pentatonic scale do you use on the guitar?

Let us know in the comments section.

Also, if you have questions about the E minor pentatonic scale in a guitar context, feel free to drop those in the comments section as well.

Which guitar chords go together? Use our tool to find out

Which guitar chords go together? Use our tool to find out