The Special Cranker is a very bluesy-sounding analog distortion with a diode selector, which gave my dual humbucker PRS a distinct "wail" and "quack" that sounded like something running on a single coil pickup arrangement. As a lighter, blues-style distortion, the analog signal gets you some really addictive tones.

It would have been better if I could have had a single coil electric guitar to test the Special Cranker. Currently, I'm down to two guitars and they're both PRS electrics with two humbuckers. So keep in mind that my testing environment was slightly flawed, but still fine for giving the Special Cranker a fair look.

With a five-way selector switch on my PRS (2005 CE 24 model), I was at least able to isolate coils and get more variety with the Special Cranker.

The setup I used was the same thing I trot out for most of my reviews:

The Cranker is a pretty straightforward pedal, so we'll walk through my experience quickly while giving you some helpful pricing and rating info along the way.

Compare the Special Cranker to Other Overdrive Pedals 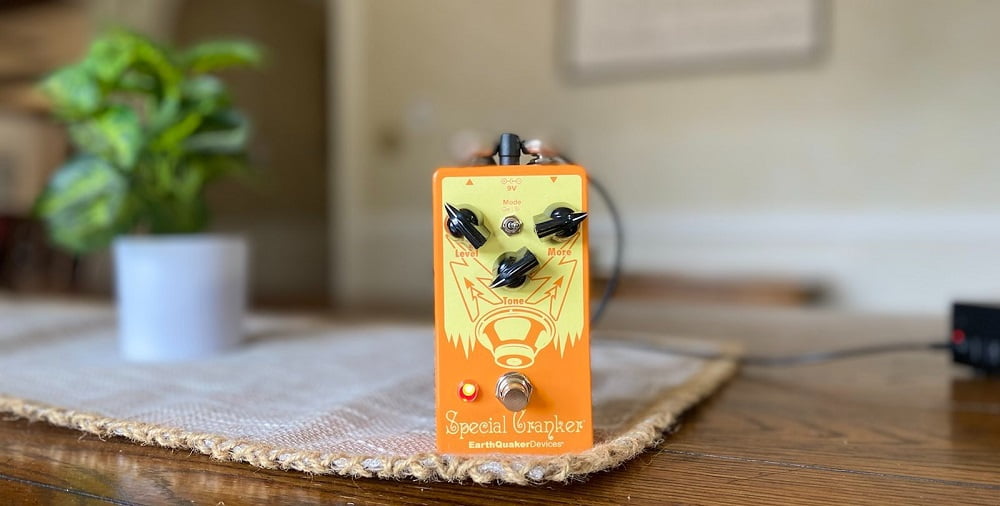 The Special Cranker is an analog distortion/overdrive pedal with a diode selector and a single-band EQ control.

We partner with retailers we trust - like Sweetwater - to help support Guitar Chalk and stay 100 percent ad-free. If you want to help us out, consider buying gear through our product links. These will let us earn a commission at no extra cost to you.

Use these pricing tools to get updated retail info for the EarthQuaker Devices Special Cranker from multiple vendors.

Sweetwater often gives you you the most balanced and accurate retail. They're a pretty good gauge of where a pedal's market value is settling.

EarthQuaker pedals are sold all over the place, with products in specialty retailers and big box stores a like.

This tool allows you to sign up for a price alert that will send you an email if and when the price drops to the amount you set. 20-15 percent is a plausible discount, but you can set it for whatever amount you want.

Whenever the price of the Special Cranker changes, this graph will plot the change. It might take some time for the price to change, so if you only see one bullet point, that simply means the graph hasn't been up long enough to record any movement.

This is a review card that we use to give a general overview, covering basic strengths and weaknesses. If you're in a hurry, you can use this table to get the quick review summary.

If possible I'd recommend pairing this pedal with a tube amp.

While I didn't test it with anything solid state, I was really happy with the mixture of my Mesa Tube combo and the analog circuit in the Cranker.

The tone is low-key and not what I'd call aggressive, even on higher gain settings. You're getting a smoother type of gain, which would probably be better titled an overdrive instead of a distortion.

It's more tame than your typical distortion, closer to something like the BD-2 Blues Driver.

The Cranker is most comfortable at lower gain settings as a kind of blues driver, or a boost to a slightly broken up tube amp.

It was most at home with the gain set below 50 percent. I shuffled between about 20 and 40 percent and got some really great, bluesy sounds.

I tested the lower gain levels primarily with lead guitar runs, which sounded especially good on the higher register. Anything above the 10th fret had an especially addictive ring to it.

On the rhythm side, the pick scraping and muted strumming had a nice snap and scratch, similar to the low-gain dirty channel on my Mesa.

The less saturation I used, the more it seemed like the analog circuit was able to stand out.

As I alluded to earlier, this pedal is designed like an overdrive, where high gain isn't the goal. Thus, the higher gain settings on this pedal are not overly saturated. To be honest, I didn't like this sound nearly as much as the less intense sounds.

The high gain sounded good, but didn't feel like it fit the profile of the pedal as well as the lower gain settings did. It was almost a fuzz tone, which seemed to cost me a bit of note definition and clarity.

Having said that, these pedals aren't meant to be gain monsters. 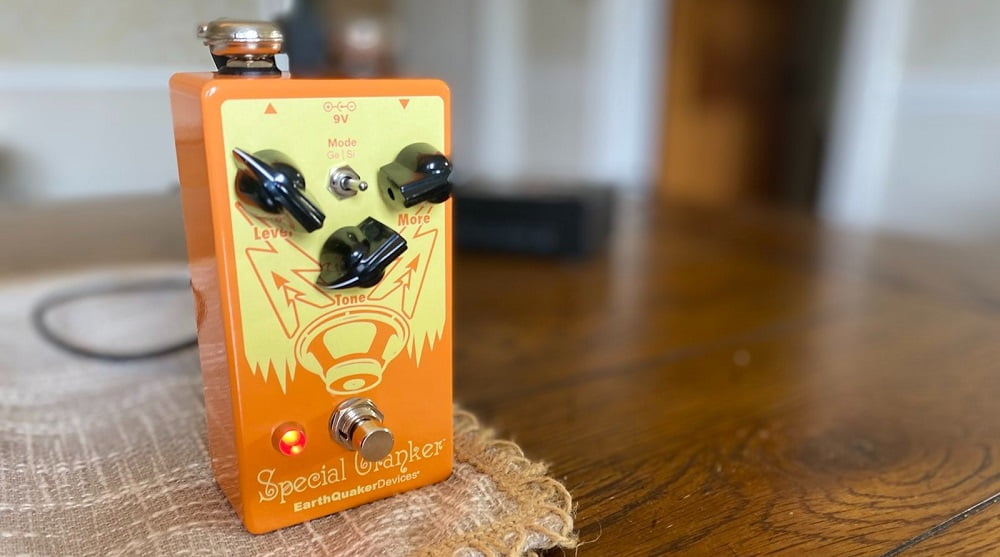 The Cranker is made for low gain, which sounds great when paired with a tube amp. Analog pedals and tube amps are rarely a bad combination.

Every gain control on a pedal has two extremes (low and high) and they're not always both useable.

My advice for setting the Cranker is to go with the gain knob (labeled "More") set in the 30 to 60 percent range.

That number could even go lower if you have particularly aggressive pickups.

Controlling gain with the More knob provides a surprising amount of flexibility. The differences between the lowest, middle, and highest points were significant, and gave me some room to experiment without making other adjustments.

Distortion pedals, especially analog overdrives, are almost always simple and one-dimensional without a ton of control.

And this isn't a bad thing. It's just the way they work.

They don't need as much functionality as other pedals.

I prefer to see pedals like this with more than a single-band EQ, but that's usually only seen in larger form overdrives.

Nevertheless, the Cranker does a decent job of giving you some variety within limited structure. It's a simple setup, but I can appreciate the versatility it achieves under the less-is-more mantra.

The tone control was the feature I messed with the least, just because I don't really like higher-pitched overdrive tones, especially when I'm working with a single-band EQ. I mostly left it at 50 percent or lower (on the bassier side).

On the higher side it sounded raspy and and too bright, which might be because of my taste and tone preference.

My take was that I got enough variety out of the gain and diode controls, so there just wasn't much need to fuss with the tone knob. 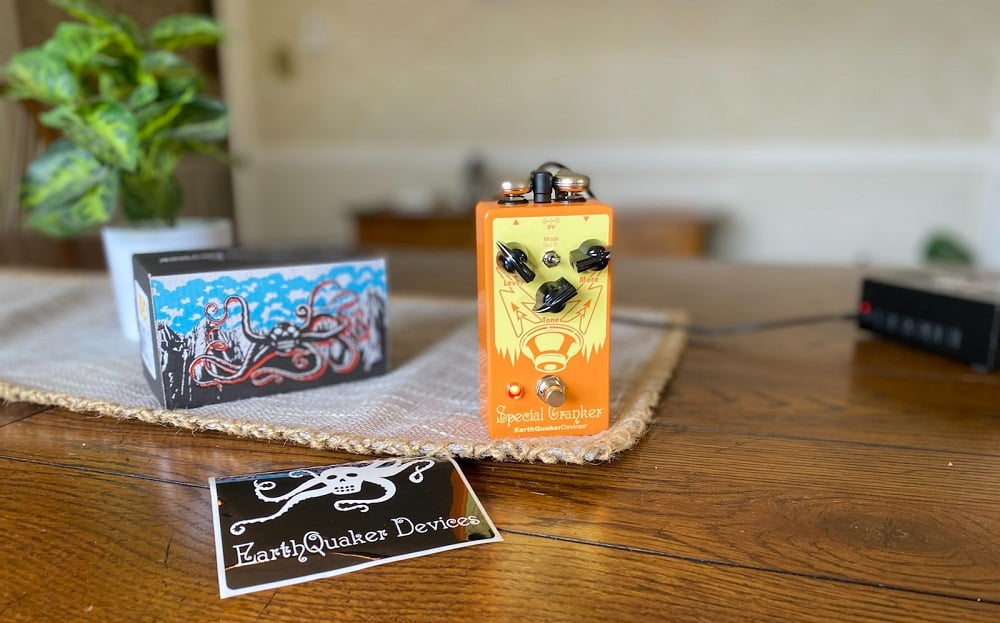 Tone control is just okay - about as good as you can expect from a single band EQ.

The higher your gain, the smoother and easier to play your strings will feel. Since the Cranker is not what I'd consider high-gain, it doesn't really give you the smoothness of a more aggressive distortion pedal.

So there's definitely a grit and grind to fretboard movement, more conducive to slow, methodic soloing as opposed to blinding speed.

But a lot of this depends on what you're used to.

I'm more used to heavy, saturating distortion tones - particularly from my Mesa combo's dirty channel. But like many aspects of distortion, this boils down to a matter of preference and not quality.

Price and Value of the Cranker

I don't totally understand the overhead involved with an analog overdrive pedal like the Cranker, but I know there are a lot of these that cost $199. That's twice the retail of the Cranker (at the time of writing this article - check pricing tools to verify), so you're getting a great deal.

EarthQuaker Devices is still more of a boutique manufacturer, so it's surprising they have this pedal so low.

For what you pay, it's a great deal.

Anyone into classic rock, blues, or more subtle styles will benefit from the Special Cranker. We'd recommend comparing this to your amp's distortion, especially if you have a tube amp. They can work in conjunction, but many amps have an excellent onboard gain source, especially the high-end tube amps.

It's important to consider that most pros get distortion from their amps and not a pedal.

But for smaller rigs, the Special Cranker is an affordable fit if you need an alternative overdrive source.

The EarthQuaker Devices Special Cranker isn't necessarily unique amongst a sea of overdrive pedals. So there should probably be some brand loyalty involved here, and a specific need for an analog overdrive source.

But it's also true that overdrive pedals can only be so diverse. EarthQuaker Devices accomplishes a simple goal with the Special Cranker and they deserve credit for that, especially since they've kept the asking price so low.

Again, I tested this pedal in-house, with my own rig.

We do not do ghost writing or blind reviews.

If you have questions about our EarthQuaker Devices Special Cranker review, feel free to drop them in the comments section below.