What are the biggest differences?

Though Epiphone does a good job of keeping up with Gibson aesthetics, Gibson Les Pauls put more effort and money where it counts, in the body's top wood piece, pickups, electronics, and hardware.

Epiphone and Gibson Les Pauls are hard to distinguish at first glance, yet there's a vast pricing difference between the two guitars.

What are you losing when you buy an Epiphone Les Paul instead of the Gibson version?

Instead of saying "they're basically the same" (they're not) or saying that Gibson is so dramatically different that you shouldn't even bother with an Epiphone, we're actually comparing to two to see where the quality differences are. This will tell you exactly what you're paying for should you buy a Gibson Les Paul. It'll also tell you what you'd be losing if you were to go the Epiphone route.

To get started, I'll summarize my comparison by highlighting where the two guitars differ and where they are essentially the same.

There are major differences between Gibson and Epiphone guitars that shouldn't be downplayed just because Epiphones are really cheap.

Where Epiphone and Gibsons Differ in Quality

Let's start with the biggest differences. Where does Gibson spend more money to get you a nicer guitar?

Next we'll look at the areas where the two brands aren't significantly different.

In this section, we've listed the two guitars we're comparing with a couple other options. The orange Sweetwater buttons are affiliate links that we use to support our site, though they cost you nothing extra to use. We appreciate your support and hope you find this page helpful.

Table of Contents (click to jump)
Where Epiphone and Gibsons Differ in Quality
Compare to Similar Guitars
Epiphone VS Gibson: The Body
Comparing the Necks
Hardware and Basic Parts Comparison
Pickups and Controls
Concluding our Epiphone VS Gibson Comparison

Epiphone VS Gibson: The Body

In this section, we'll compare features between the Epiphone and Gibson Les Paul entirely related to each guitar's body.

Gibson's version of the Les Paul uses the same basic body shape and even the same variety of tonewood for most of the body. However, the AA figured maple top is an improvement over the "veneer" used by Epiphone, while Gibson also puts more into the top with detailed carving and the nitrocellulose lacquer finishing.

Even in electric guitars, the top piece has a lot to say about the quality, which is where Gibson really pulls away from Epiphone in this category. 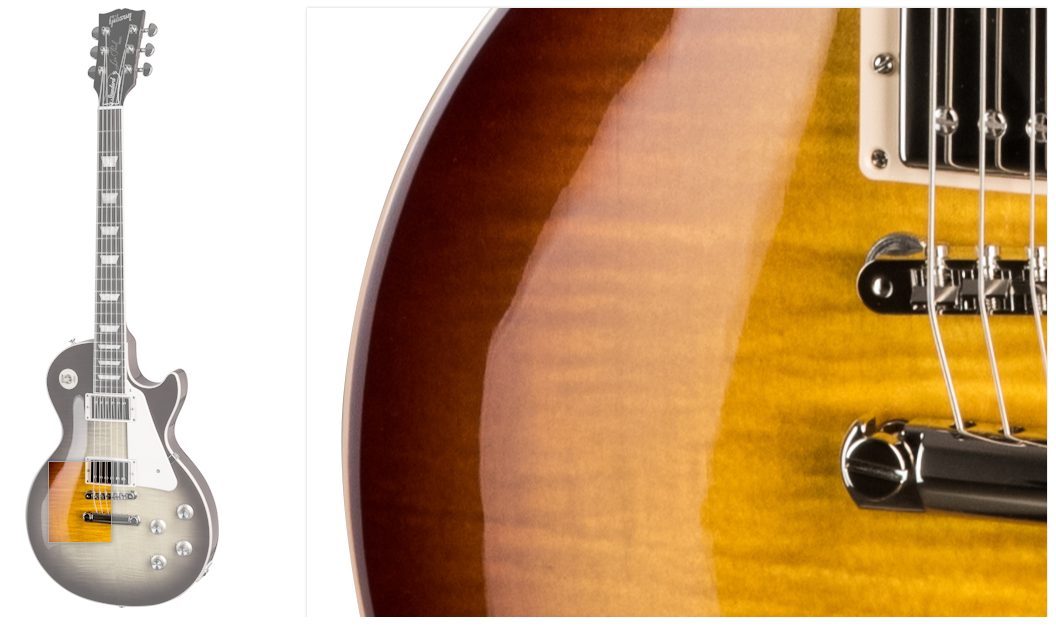 The top piece of wood is where Gibson starts to significantly set itself apart from the Epiphone offering.

The Epiphone finish isn't as bright and boasts a less pronounced body carving.

When you get up close and compare the two tops and finishes, you can really start to see where Gibson did a far more thorough job of making the tops of the Les Paul models look really appealing.

It's an aesthetic difference, though the figured Maple in the Gibson will also help improve tone.

A quick look at the necks of an Epiphone and Gibson Les Paul show little (if any) obvious difference. Even the trapezoid inlays are usually going to be present in both, leaving the impression that the two are essentially the same.

A closer examination of both guitars reveals some subtle, yet important, quality differences.

The Slim Taper neck design and Rosewood fretboard are meaningful upgrade over the Epiphone neck, which uses a cheaper tonewood and cheaper inlay material. Again, the differences are subtle, but there are distinct quality markers on the Gibson Les Paul that you won't see in the Epiphone version.

Most physical attributes of the neck - such as fret size, nut width, and fingerboard radius - remain the same on both models. 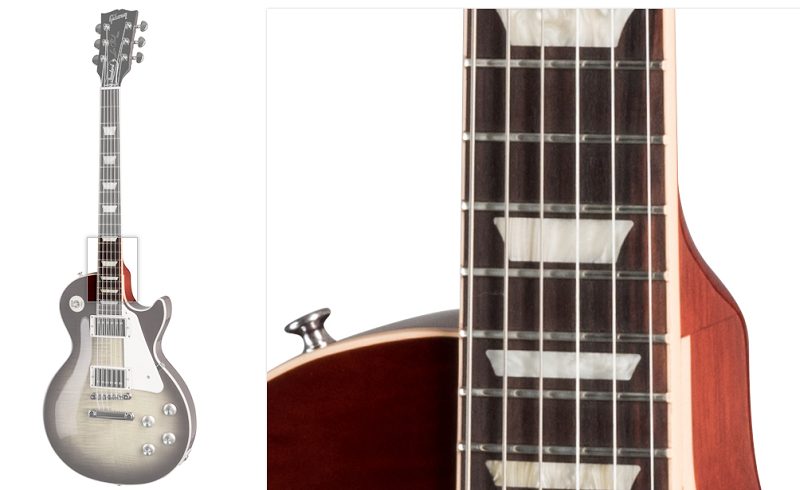 The inlay material, Rosewood, and Slim Taper neck design are all winning categories for the Gibson Les Paul.

Though similar to the Gibson design physically, the Epiphone Les Paul's neck gets a cheaper tonewood and inlay material.

This is where you'll start to see a more significant difference in an Epiphone VS Gibson comparison. Hardware, which contributes more to price, is going to meet a higher quality standard in Gibson Les Pauls because they rely less on stock parts that are cheaper. Here are the specific differences between the two.

All three of the main hardware components - the bridge, the tuning machines, and the control knobs see an upgrade in the Gibson version of the Les Paul. The bridge hardware and tuning machines are both well-recognized models and brands, making the stock Epiphone LockTone bridge - for example - a little disappointing by comparison. 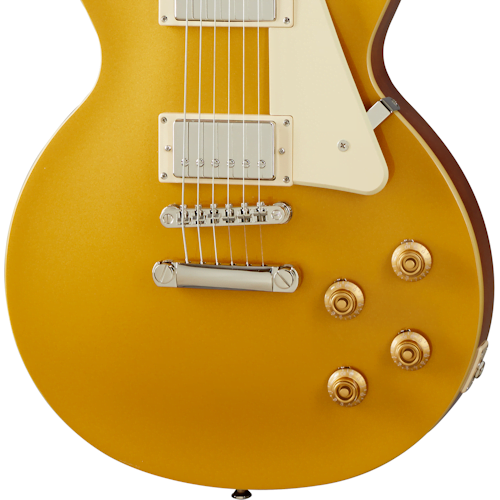 For both the bridge hardware and tuning machines, Epiphone uses in-house stock parts. 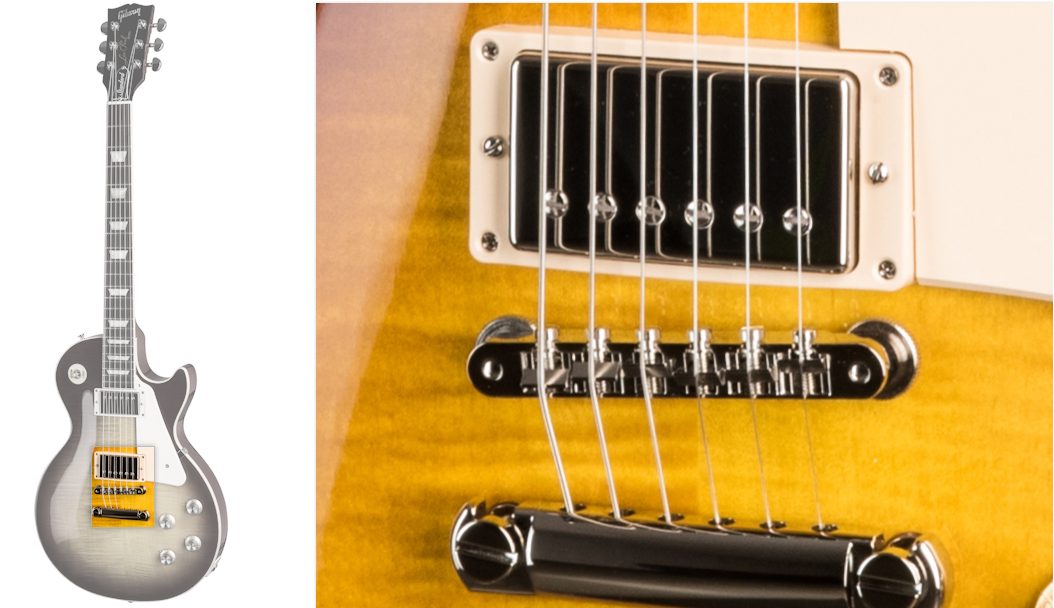 Hardware is an area where Gibson really starts to pull away from Epiphone from a pure quality perspective.

Though both the Epiphone and Gibson Les Paul guitars use an in-house pickup, Gibson has actually been well-known for quite some time as a respected pickup builder. Many people actually buy Gibson-brand pickups to upgrade other guitars.

For example, the Gibson Burstbucker is a popular upgrade pickup.

These Burstbucker pickups - nearly a $250 humbucker set - come standard in many Gibson Les Pauls. On the Epiphone side, the ProBucker is Epiphone's cheaper alternative, which they have put some effort into designing. However, it's undeniable that we'd much rather have the Burstbucker as opposed to what amounts to an Epiphone stock part they've taken time to get named and patented.

Here's a link to the Orange Drop Capacitors mentioned for the Gibson controls (tone and volume knobs). It gets into some of the technical aspects of the capacitors, but I'll summarize here by simply saying, they're better.

Concluding our Epiphone VS Gibson Comparison

While Epiphone Les Pauls might have a reputation for being appreciably similar to their Gibson counterparts, it's clear from this comparison that the two instruments are dramatically different.

Moreover, they're different in the areas that are most substantive:

These are all critical areas of a guitar's design, and in a direct Epiphone VS Gibson comparison, Gibson puts way more work into these areas.

Are the aesthetics similar? Sure.

They may even "feel" the same in your hands. But we'd argue there are major differences between the two that shouldn't be downplayed just because Epiphones are really cheap and buyer-friendly.

Questions about the Guitars

Do you have questions about Epiphone or Gibson Les Pauls?

Perhaps you want to know more about how we compared the two?

If so, feel free to drop a line in the comments section below and I'll do my best to help out.