The Eventide ModFactor is a multi-modulation pedal that has helped many guitar players condense their pedalboards. It's expressive and versatile, to say the least. And while it's much more expensive than single modulation pedals, the ModFactor has a lot packed into it with a total of 10 parent effects and 100 presets.

This is not your average one-trick pony modulation pedal.

Eventide is well known for their larger-form effects processors, particularly their popular harmonizers for decades. Eventide first began building pedals the 1970s and was one of the first companies to ever make digital effect processors.

They were also the first music company to make a piece of gear that used RAM, as well as the first to use a functional plugin.

As I mentioned earlier, the ModFactor itself has been around for quite some time.

Eventide has been honing their craft for over 50 years, and it shows in the ModFactor, which is one of the best modulation pedal on the market.

Intro to Tone Quality and Functionality

The Eventide ModFactor modulation pedal is studio-quality and brimming with customizable settings. It has two low-frequency oscillators (LFOs) which provide a wide range of EQ variety.

The percussive and rhythmic modulations like the undulator particularly impressed us.

It’s hard to find such uniquely blended modulations, especially with minimal tinkering. This piece of equipment provides so many algorithms and parameters that you’d be hard-pressed to find the time to get around to all of the combinations. It's a good problem to have.

The pedal comes with the following 10 main effect types:

For this review, the pedal was tested on a PRS Santana SE with Seymour Duncan pickups and a Mesa Boogie Rectoverb amplifier. You can watch Bobby’s all-playing, no-talking demo video here:

The vibrato is silky and the undulator and Ringmod are pretty wild, so be sure to watch until the end.

Next, I’ll walk you through more of the ins and outs of this pedal in this Eventide ModFactor modulation pedal review.

For our Eventide ModFactor review we tested this pedal in-house with our own equipment. If you have questions about our review process, please feel free to get in touch or check our content policy. Also note that we support ourselves primarily with Sweetwater affiliate links which also helps keep us ad free. If you want to help support Guitar Chalk, consider buying gear through these links (orange buttons), which cost you nothing extra. Thank you for your continued support.

Compare to Other Eventide Pedals

We've put this comparison table together to show the ModFactor along with a few other Eventide pedals we've used and/or reviewed. You can launch the search bar below to look at additional pedals for comparison.

You can launch a sidebar search tool here that will let you pull up additional guitar pedals for comparison. Note that we're continually adding to our product database, so check back for more listings. 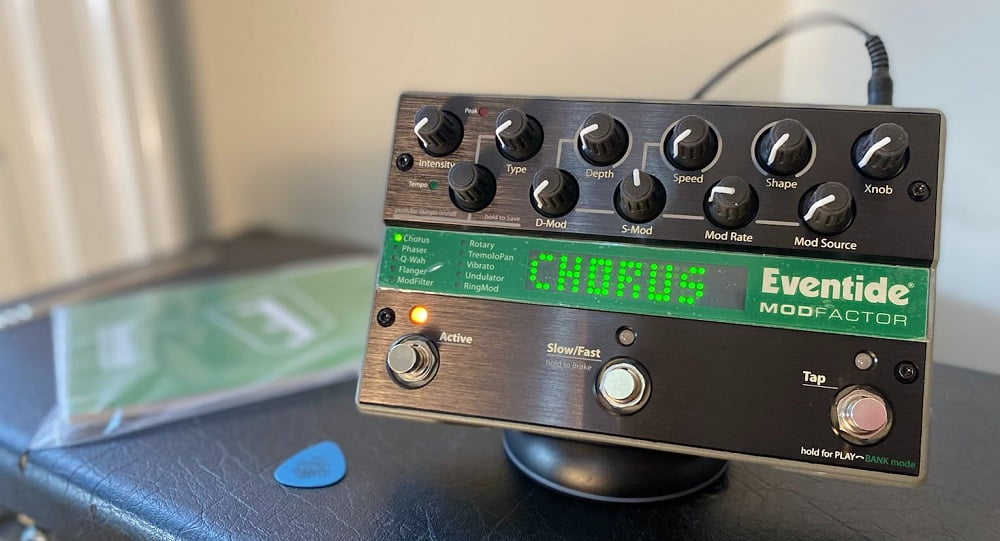 The ModFactor is a large-form modulation pedal with a ton of algorithms and control options.

This section contains updated pricing tables and includes multiple vendors. This will let you compare retail and find the best deals. You can also sign up for price drop alerts and check price change history below the vendor table.

IDEAL FOR: Multi-genre use in recording studios (rock, psychedelic, experimental, lofi, and more), on the stage, and adding unique, trippy-feeling textures to your music.

The Eventide ModFactor has two total LFOs and 10 main effects, as well as the option to switch between mono and stereo. Eventide has taken their best modulation effects and put them in one single divide.

The tone you can get out of this stompbox is stellar. The timbres and textures that can be cultivated make it suitable for nearly any genre. There aren’t very many pedals that are so versatile. It’s basically 10 pedals in one.

There's a lot of layering potential here, especially for clean tones where you might want something a little more ethereal and undefined. There are even some ambient and pitch shifting qualities due to the wah-esque effects (more on those below).

As I mentioned in the ‘pros’ this pedal does an amazing job at keeping notes crisp and noticeable. One of the biggest complaints I have about cheaper effects pedals is that the beginning of my notes tend to get lost in the effect layer. With the ModFactor I never noticed notes getting muddy, even on softer picking patterns.

Existing presets are pretty basic, but you have a ton of room to explore with the wide range of controls. 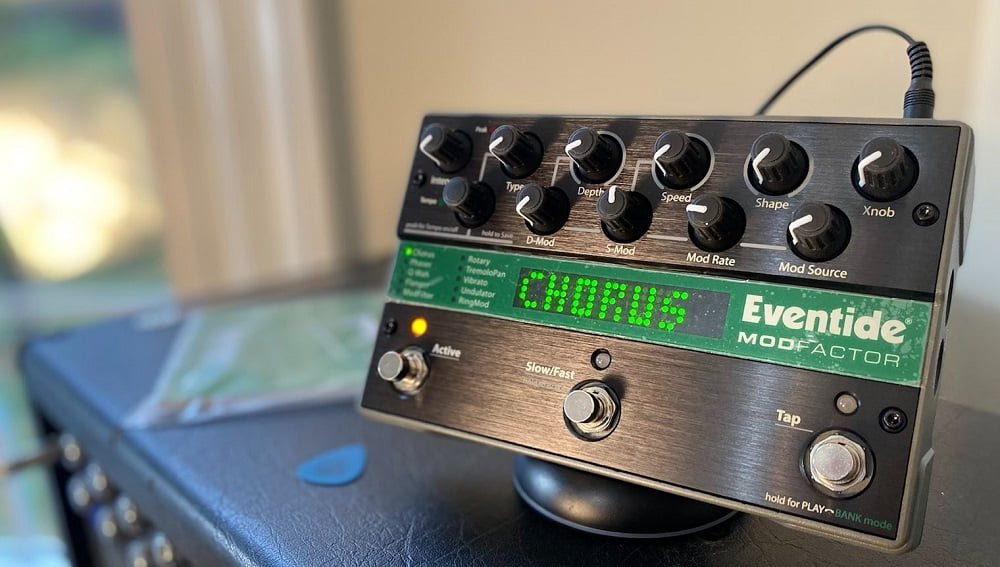 There's a lot of creative room on the ModFactor's front panel. It's hard to work through all of the sound possibilities.

The two LFOs baked into the pedal have entirely different effects. While one modulates the effect itself, the other modulates the modulation. How meta is that? Next, I’m going to get into the main effects and some of their presets.

As I mentioned, there are 10 main effects within the pedal.

The wah on the ModFactor has actually been compared to Dunlop’s Crybaby wah.

By eliminating the need for all those single-effect pedals, it’s easier than ever to carry around a full color palette of sound.

I wouldn't necessarily categorize a wah or auto-wah pedal as a modulation effect, but it was still pretty easy to find ways to use it. Since the chorus effect typically offers some pitch shifting options, I suppose the wah could be categorized the same.

Nevertheless, I won't complain about added functionality to an already stacked pedal.

The vibrato effect is another one of my favorite algorithm category. It's brilliant, lush, and sounds far more natural than the vibrato on many other multi-effect pedals I’ve tried.

The undulator is one of the most unique algorithms in this pedal. It sounds like a combination of Ringmod, and synthesis, giving off a brassy, synth-like sound which really expands your creative arsenal. It's especially useful in the modern context of electronic music.

If you're familiar with Eventide, you might recognize that the undulator effect comes from the H8000, the eight-channel effects processor.

The fast/slow footswitch can be used to adjust the rate of the LFO. You can either use this switch or tap tempo to adjust the oscillator. I find the footswitch to be really convenient, especially when I’m in the middle of an improv section, or playing a song with a lot of transitions. 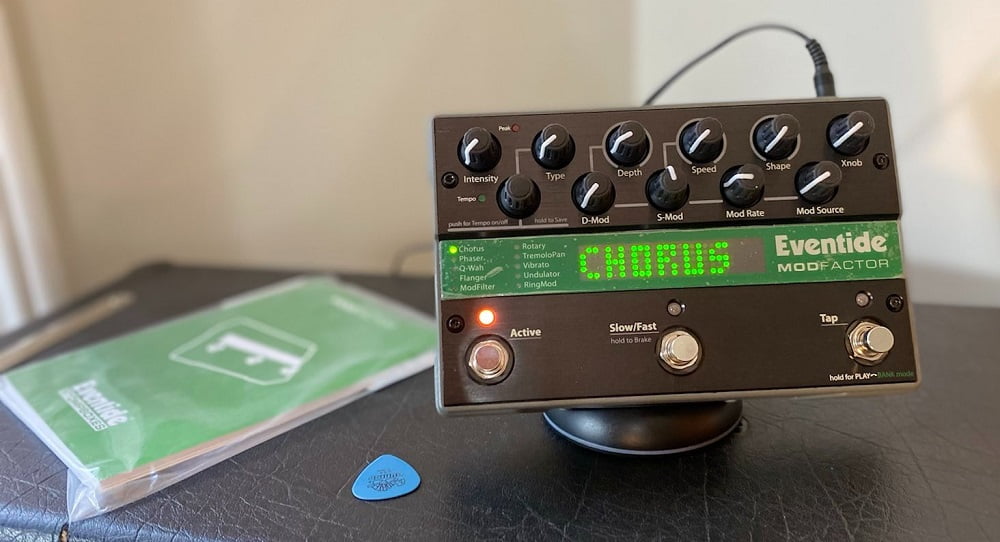 Eventide packs a ton of variety into the ModFactor, including wah and pitch shifting effects.

You can set the tempo mode to the MIDI clock in the panel, which will then automatically set the tempo to the MIDI signal. This feature is pretty straightforward to use and will help you sync multiple divides together.

The 10 main effects can be altered through the following knobs:

Some other notable features within this pedal are that it has a performance switch for extra control, selectable reverb tails, and control software capability (once again, that is compatible with the H9).

The Eventide ModFactor is one of the best modulation multi-effects I've ever tested. It provides a lot of variety while making you feel like there's still plenty of thought and quality put into each sound.

If you'll take advantage of the variety, it's going to be a good fit for you, particularly if you're into some of the more trippy sounds and layering of modern music.

Of all the effects included, the vibrato and undulator are my two favorites.

Another huge pro that I haven’t mentioned yet is that this piece of gear is advertised as being ‘future proof’ which I know a lot of players love. It’s the worst when you get a studio-grade piece of gear that can’t be updated, so your pedal goes out of style when the new flagship one rolls in. Gear that supports USB updates have a long life on the stage, and it’s a relief to see that Eventide is considering the buyer here.

If are just starting out, this Eventide pedal may be a bit too much for you. It takes a long time to learn the ins and outs of it, and memorizing the controls can be a bit overwhelming at first.

However, if you are in the market for a high-end, studio-grade pedal chock full of modulation tones with a versatile control scheme, definitely put this one on your wish list.

Who would’ve known so much could be packed into a little three-pound stomp box?

If you've got questions, feel free to drop them into the comments section below.

Written by Danielle on Pedals and Pricing