Our Verdict and Reviews Summary

Stacked coil and multi-voice technology developed by Fishman gives you a noiseless, smooth, and active pickup sound with the organic appeal and versatility of passive pickups. The Fluence series is a game-changer, and the Modern is one of its strongest humbucker offerings on all sides of the high-gain and clean spectrum.

It wasn't until his company was able to develop a stacked-coil, multi-voice pickup technology that Fishman entered - and quickly took over - the realm of electric guitar pickups. In this article, we'll use our Fishman Fluence Modern report to explain that technology and why we believe they're some of the absolute best guitar pickups money can buy.

While we don't do full ratings for pickup sets, we've added a few comparable humbuckers to this table with the Fluence Modern set, just so you can get a feel for similar alternatives.

Tosin Abasi is one of the biggest fans of the Fluence series, and even has his own signature set for his extended range (seven and eight-string) guitars. His Reverb-produced demo gives you a good snapshot of the clean tone produced by the Fluence Modern set, even if the specific pickup model he's using is slightly different. You still get a good picture of how the active technology gives you the quietness and noise control of an active set, while also promoting the raw and organic appeal of a passive pickup set with a single coil edge:

In the following demo video, Gerry Trevino does a lot more of taking you through different sounds, both on the dirty and clean end of the spectrum. Since the Fluence Modern pickups provide so much flexibility and so many different voicings, it actually takes Gerry awhile to get through all of them. Note that he's putting each coil arrangement/voicing on the screen as he plays.

In the following section we've compiled a few images and screen-grabs of the Fishman Fluence Modern humbuckers. We've also put together a "quick hits" and pros/cons section for our analysis.

IDEAL FOR: Fans of active pickups that need to reduce hum or play a modern style with a lot of clean tones

In that regard, they are absolutely the most flexible and versatile set of humbuckers ever developed.

Between the multi-voice technology (able to voice both Alnico and Ceramic magnets) and the coil-splitting possibilities, you can get a ton of different sounds out of these pickups.

What's even more remarkable and that most of those sounds come off as true to the original models.

At the same time, thinner, single-coil tones on a clean channel sound sweet and bluesy, just like you would expect from a single coil Stratocaster pickup set.

There's just no weak spot for the Fluence sets when it comes to tone quality. As an active pickup it provides warmth, fullness, and raw power, but also the subtlety and organic emphasis that many players like above passive sets. By stacking coils in their pickup design, Fishman makes it possible for a single set of pickups to give you the best of both the passive and active worlds.

You'll also notice that this is an extremely clean and noise-free humbucker set. The aforementioned design also plays a huge role in keeping the set quiet, free from noise and hum.

Ease of Use and Installation

The only downside to the Fishman Fluence Modern sets would be the installation process, which can be a bit tricky if you want to enable coil tapping.

We would assume that the most common setup would be a tone knob, volume knob, and three-way pickup selector.

In that case, here's what the wiring diagram looks like: 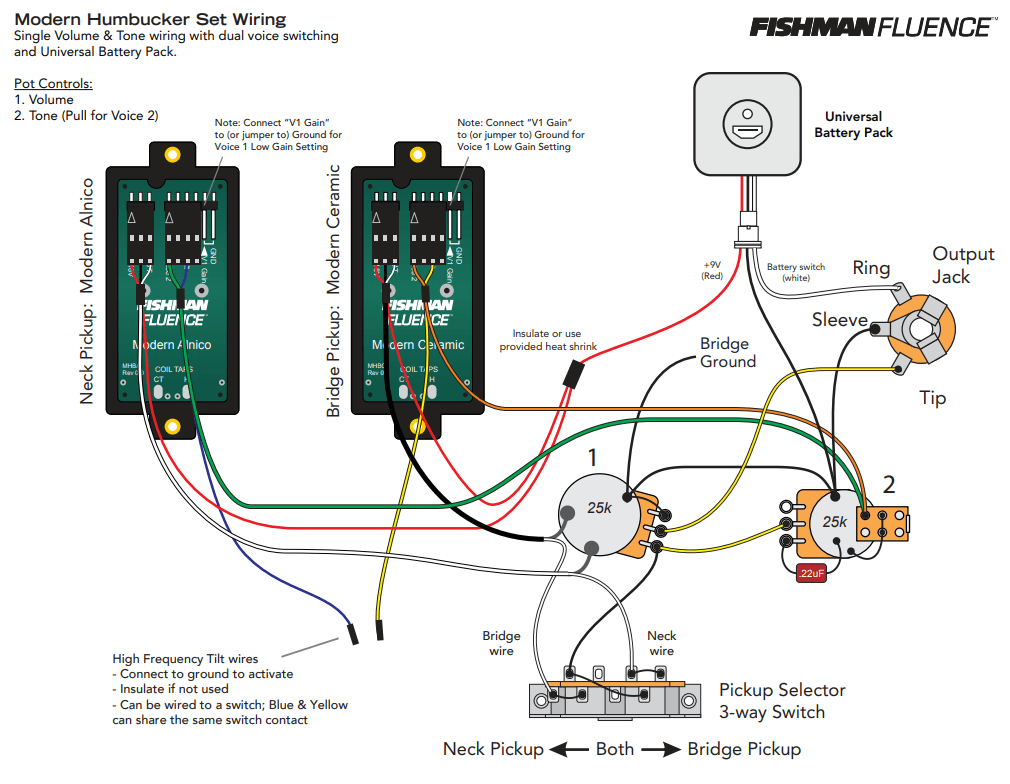 There are other wiring diagrams and resources that you can access on the Fluence Modern product page.

Since the pickup set is active, it does need a battery to run, which is an included rechargeable battery. This battery can be charged with a USB cable - a mini-USB connection - just like you would a cell phone.

Here are some quick hits about the battery pack:

Here's a closer look at the USB mini connection on the back panel: 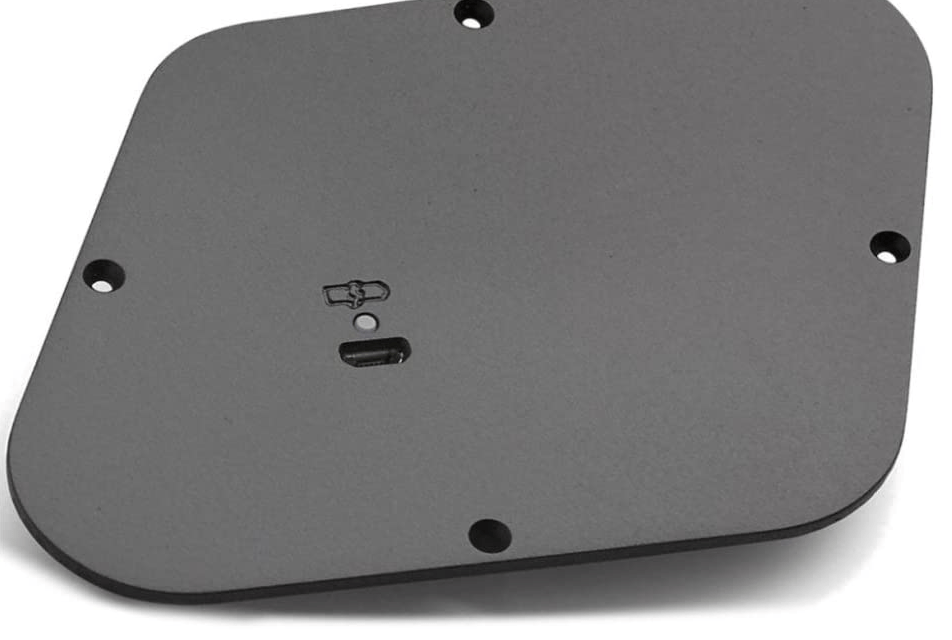 This saves you from having to pull the back panel off and replace a battery. Instead, just plug it in for a couple hours and you're good to go.

Value of the Fluence Modern Set

At about $240 retail, the Fishman Fluence Modern set (bridge and neck humbucker) are a little high on the pricing scale, but not significantly. They're certainly not what we would consider over-priced.

Considering the advancement in technology and the work that has gone into developing this set, we think the $240 asking price is extremely reasonable.

It's also worth considering that you get a lot more capabilities and tonal variety, almost like getting multiple pickups in one.

We'd recommend them for most humbucker upgrades, especially if you're trying to improve your clean tone.

Who would we recommend it to?

It's hard to find an area where the Fishman Fluence Modern humbucker wouldn't be an upgrade. Even the nicest offerings from Seymour Duncan and DiMarzio don't have the same kind of versatility and technological advances that we see in the Fluence Modern set.

If you have a nice set of humbuckers from a reputable brand and you like them, upgrading to the Fluence Modern set may not be necessary unless you do it on a different guitar.

Aim to upgrade guitars that are still running stock humbuckers or where you're unhappy with the type of tone you're getting.

The Modern set is going to be particularly good for heavy, percussive rock with high gain levels as it will hold your tone in and keeping things tight. It's also a dream when it comes to clean tones and pick responsiveness. Noisy rigs can also benefit tremendously from the Fluence's design and technology.

Do you have questions about our Fishman Fluence Modern review, or about another humbucker not mentioned here?

If so, feel free to drop a line in the comments section below and I'll help as best I can.