The Hercules series is a high-end lineup guitar stands, designed to be incredibly easy to set up, even with more complex models like the GS523B (holds multiple guitars). We tested the GS523B with several electric guitars, acoustics, and basses, and didn't notice any wobbling or sliding. It's sturdy and nicely padded, which is all you can really ask out of a good guitar stand.

I was surprised to see that Hercules actually offers a lifetime warranty for all their products (though there's some important fine print involved with that - see below). Because in my experience, guitar stands are notoriously flimsy and tend to break or just loosen very easily. While I certainly haven't had the Hercules for years to test its resilience, it seems significantly stronger than other stands I've used.

Stands are an investment in your more expensive pieces of gear and I always recommend having some form of a stand, especially for performances. Though I prefer keeping one in my home studio as well. It makes life easier when you don't have to keep stashing a guitar back in its case.

In my Hercules guitar stand review, I'll cover my experience with this stand and my initial impressions, as well as some value and ideal buyer context.

We'll include a price guide as well.

All of our reviews, roundups, and recommendations are opinion and should be taken with a grain of salt. However, we do use affiliate partnerships with Sweetwater and other manufacturers we trust, so if you buy through those links (usually orange buttons), we may earn a commission at no extra cost to you. 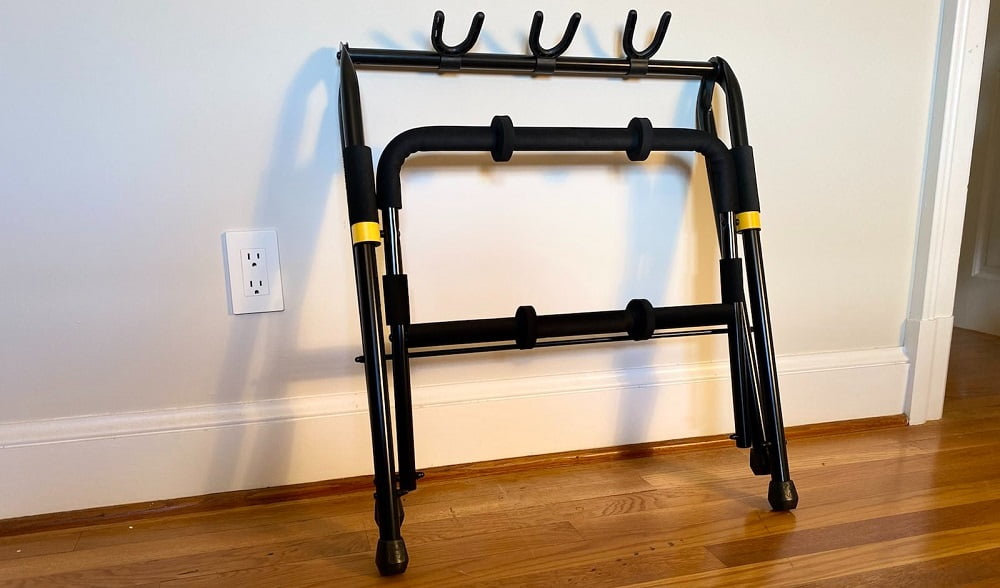 The Hercules stands are both incredibly sturdy and easy to set up.

In this section we've included some pricing tools for multiple vendors and a price drop alert you can sign up for. There's also a price history graph, though keep in mind that there may just be one or two bullet points if the price hasn't changed recently.

IDEAL FOR: Home studios, gigs, church, and pretty much anything else

We do not provide category ratings for guitar stands.

For a guitar stand - a rather simple piece of equipment - there's a lot to consider and a lot to like about the Hercules series. In this section we'll cover what we liked about the GS523B.

The GS523B feels heavy and strong in your hands. The metal tubes are hollow, but heavier than other stands I've used, and don't feel flimsy or moveable. All joints are tight and moving components take some muscle to get going.

It's hard to tell if the joints will wear over time, but I can't imagine this would be an issue since there's little movement in the joints after the stand is set up.

As guitar stands go, this is the strongest and sturdiest one I've ever used.

Extremely easy to set up

I was a little nervous that the Hercules would require some setup or "putting together" after unboxing, but there's literally zero work on your end.

Literally open the box, pull the stand out of the plastic, and pull the padded base forward to expand the stand. 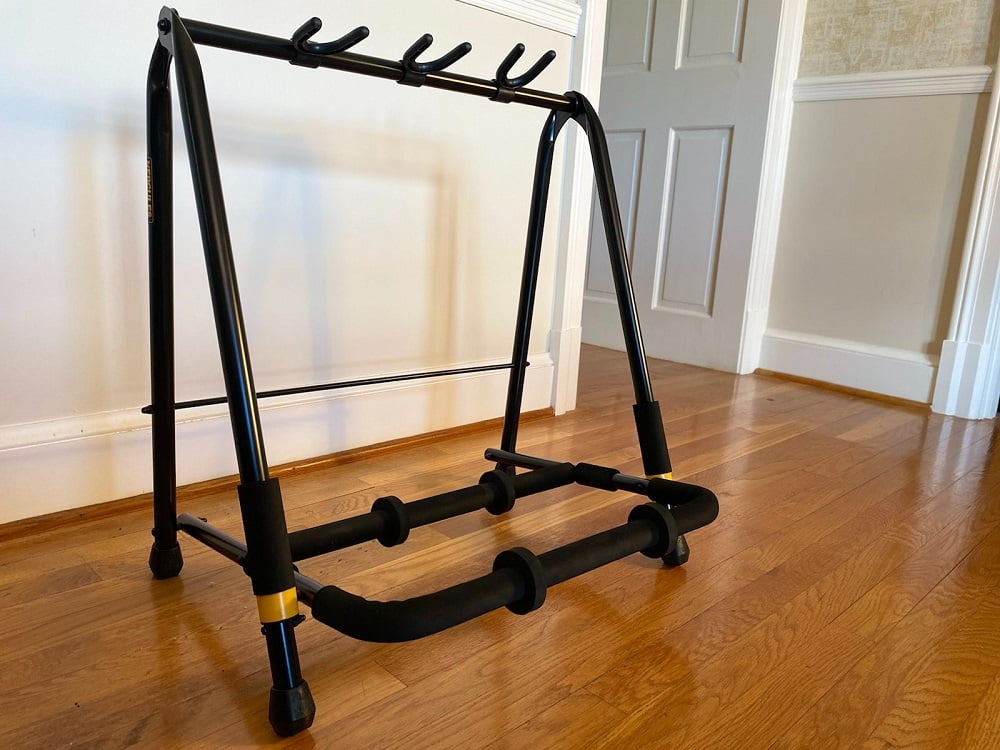 Simply pull the padded base forward to expand the stand. That's all the setup required.

From there, guitars go on the padded base while necks should sit between one of the three yokes. If you don't put your guitar's neck in the yoke, it still won't move much, though best practices would dictate that you stick with one guitar for each yoke.

I carried the Hercules GS523B with a guitar in it (a couple times) and the guitar truly did not move. There was never a point where I worried about dropping it or the guitar sliding around. In a sitting position it holds you guitar tight, due largely to the padded bottom that increases friction.

Yes, there is a lifetime warranty, however:

You really need to read the fine print here because the warranty specifically deals with "defects" and not "normal wear" of parts. Moreover, they claim the right to be the sole arbiters of how those two terms are defined.

Here's the language they use:

Screws, springs, pads, foam, and other parts subject to normal wear have no warranty coverage. This warranty does not cover damage, deterioration or malfunction caused by accident, negligence, misuse, or abuse. Final determination and resolution of replacement and or repair action is held by KHS America and its authorized representative. KHS America reserves the right to final determination of any and all warranty obligations.

To be fair, the warranty isn't bad. It's still pretty good by industry standards.

Plus there are often additional two-year warranties from resellers like Sweetwater or ZZounds. I've just noticed several other reviewers that cite the lifetime warranty but don't mention these rather important aspects of it.

As I mentioned earlier, the yokes are adjustable left to right and there's really no need for any further adjustability. While the yokes can be moved, they also do a fairly good job of staying in place when you need them to. 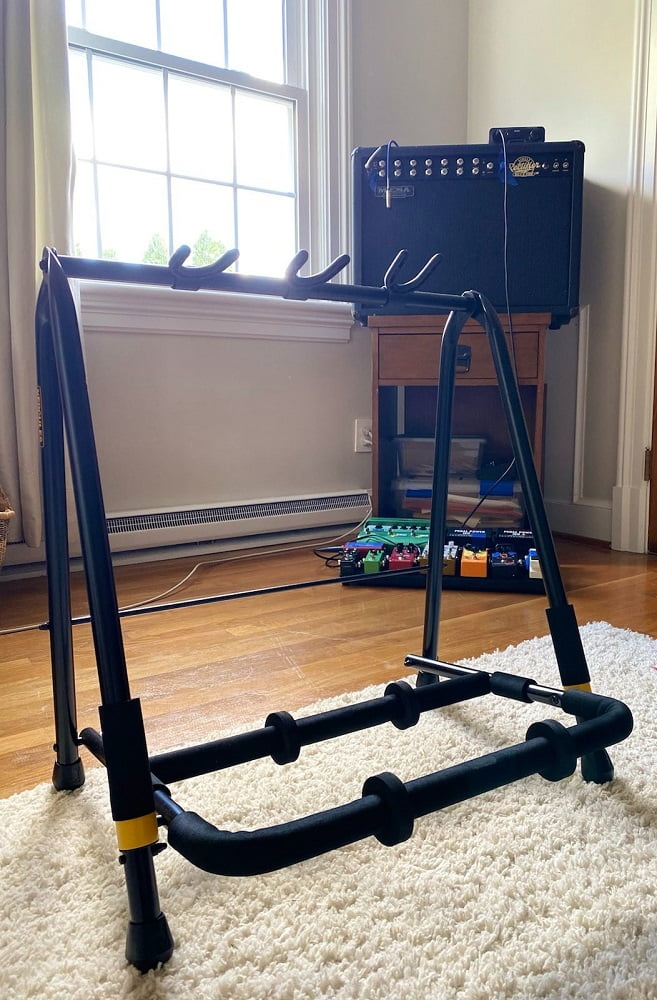 The Hercules guitar stand in my office, in front of my current guitar rig.

I thought the acoustic guitars had a slightly better fit than the electrics, but I also don't want to split too many hairs. The foam padding on the two bottom pipes pretty much settled to whatever shape we set on them.

I can't speak to other body shapes, like how an Explorer or Flying V design would settle in.

Other considerations would be Jumbo acoustics or the small 3/4 body design.

Hercules is in the mid to high tier of guitar stand pricing. The Gator case-style stands and Guardian stands are both more expensive, though there are plenty of economy guitar stands that are cheaper than the Hercules models. If you're going to buy a stand, especially for multiple guitars, I have no problem paying more because this is a product where you probably shouldn't try to cut costs.

All the Hercules stands strike a good balance between price point and product quality, so I have no complaints about the asking price.

Again, if you want an updated quote, check the live pricing tables above. 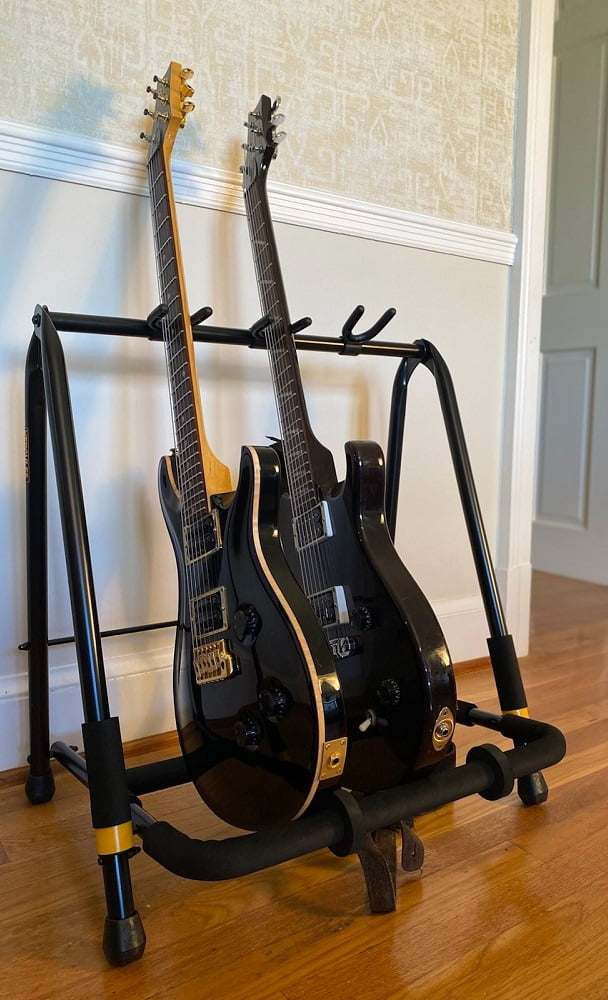 In just about any scenario a guitar stand is helpful. What is more relevant is which one you go with. Hercules gives you (at least) the following options:

Which one works for you is mostly a matter of how many guitars you have. I always have at least three in my office, so I went with the GS523B.

Even if you're just playing in your living room, having a single-guitar stand is going to be really helpful. For performances and managing multiple guitars, it's an essential component of your rig.

Hercules is a great balance between the more expensive Guardian stands and the multitude of stands that are too flimsy and cheap to be worth buying. We'd recommend Hercules stands even for more professional and high-end gigging situations. Since it can fold up so easily, it's a breeze to transport.

It's a confident and easy recommendation for us to make.

If you have additional questions about our review process, the Hercules guitar stands, or something else, feel free to get in touch via the comments section below.

I'll jump in and help out as much as possible.