The HM-2w's Swedish chainsaw metal tone has more sustain than any distortion pedal we've tested. It's aggressive, thick, and gets you close to that modern tube amp punch that's hard to find in a stompbox. It's definitely our favorite Boss distortion and makes a case for our favorite overall.

The most evident feature of the HM-2w's tone is sustain.

It produces a ton of it.

Even on lower gain settings, you can't really miss the sustain, which trails back with a growling quality, or what some might call the "chainsaw" Swedish metal gain style. This pedal's analog tone, like the original HM-2, gets close to the same sound you hear out of modern tube amps like the Mesa Mark V.

Here's what you're getting in the HM-2w:

If you're after these qualities, the HM-2w is a good fit. Bad fits would be lower-gain environments like blues or even classic rock. You almost can't get a subtle style out of the HM-2w, which makes it less flexible than pedals like the Empress Heavy, which can do both tones very well.

But that's probably not why you'd buy the HM-2w. That's not what it was made for.

We'll get into the fine print in our full HM-2w review.

Drop questions in the comments section below the article.

We tested the HM-2w, pedal in hand, took our own photos, and recorded our own demo for this review. If you have questions about our review process, please feel free to ask. Also note that we earn money through partner links to Sweetwater and other vendors we trust. If you click through our orange buttons and make a purchase, we might earn a commission at no additional cost to you.

Compare to Other Boss Distortion Pedals

There are a lot of distortion pedals in the Boss lineup. In this section you can see how some of them compare, both in pricing and basic specs. Note that the price of each pedal is updated live. 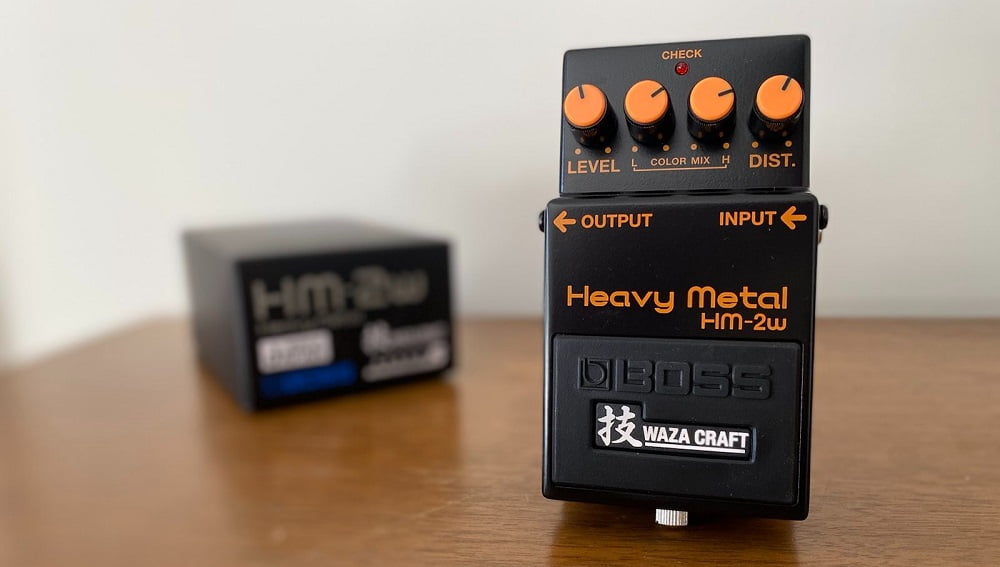 The HM-2w Waza Craft is a very heavy and aggressive analog distortion pedal with a ton of sustain. It's built in a mold of the Swedish chainsaw metal style.

This section has all of the current pricing information for the Boss HM-2w, with updated numbers from the most popular vendors.

Table of Contents (click to jump)
Compare to Other Boss Distortion Pedals
Boss HM-2w Price Guide Section
Gain, Tone Quality, and Overall Sound
Review of the HM-2w Controls
What power supply does the HM-2w use?
Where does it rank among other Boss distortion pedals?
Can you still get the original HM-2w?
What's the best amp to use with the HM-2w?
Price and Value
Best Style Fit
Review Conclusion

As I've alluded to already, this pedal is all about saturation and sustain. You almost can't get a low gain tone out of it, even with the DIST knob turned way down. On almost every setting I tried, I had punch and a long sustain trail.

There wasn't much I had to do out of the box to get it sounding the way I wanted. I'm a metal and hard rock guy, so the default tone sounded great to me.

On some settings with the gain higher, it had less shape than I would have hoped, where the percussive palm mutes and power chord would give sort of lose their definition.

To dial this back, I just pulled the gain down and bumped up the bass and midrange.

But this is a preference and not a quality issue.

The sustain trails sound heavy, power chords sound punchy, and the saturation levels are high, to the point where they have a ripping quality to them.

Here's my own demo.

As usual, I tested the pedal with my PRS CE 24 electric guitar and a Boss Katana 50 amplifier. As a result, the sound in the room wasn't as good as it would have been with my Mesa Rectoverb, but the Katana did a good job on the recording.

To set this up I used the Katana's clean channel and then a direct out going to a Scarlett Solo USB audio interface so I could record on a MacBook.

I noticed it was odd that I didn't get much feedback, even on the higher gain settings. Yet, the harmonics were really full and easy to draw out.

Usually when you have clear harmonics like that, you'll get some feedback.

This was not the case with my setup.

I really liked the sound of fast-paced, palm-muted power chords.

They were clear, easy to differentiate, but also very percussive.

They just sounded metal, even when in a meager drop-D tuning. I didn't have to tune lower to get the metal sound I wanted. 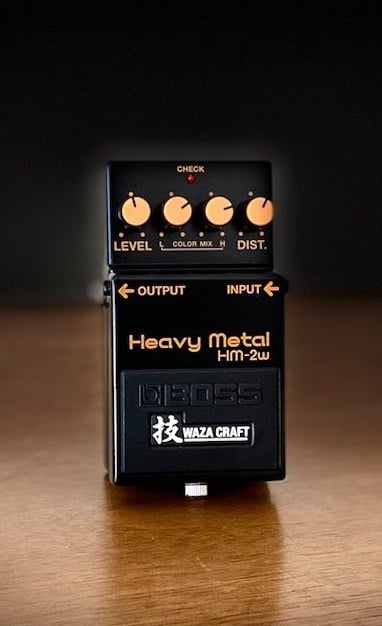 The HM-2w has a simple control scheme, but you won't need to make many changes anyway.

Review of the HM-2w Controls

Like most Boss distortion pedals, the HM-2w's control scheme is very simple. You have a level and distortion control where you'll modify the gain levels and output.

Next you have a two-band EQ labeled under Color, which gives you a lot of flexibility.

The hi pass control seemed to have a lot more variety than the low dial.

For the most part I set the bass around 3 o'clock, about 75 percent of the way up.

Again, the controls are simple. You can just set and forget once you find something you like. The controls on the pedal should be set after you set the EQ on your amplifier, preferably on a clean channel with really low gain. Once you do, let the HM-2w take over and handle all the gain.

The HM-2w is definitely not going to be a good fit in the classic rock or blues space. For being modeled after such an old pedal (the original HM-2), it produces a very modern distortion tone.

What power supply does the HM-2w use?

The Boss HM-2w uses a standard 9V DC power supply, though Boss does not include these when you purchase any of their pedals.

A 9V battery is another viable source of isolated power.

Where does it rank among other Boss distortion pedals?

But overall, I've put the HM-2w at the top of the pile. You can read my reasoning here.

Can you still get the original HM-2?

The original HM-2 is still available in most used markets, primarily Reverb and eBay. You'd probably be looking for the 1987 version that was made in Japan, like the new Waza Craft pedals.

Since it's pretty rare at this point, it usually retails higher than the HM-2w.

That price could go higher as the HM-2 units get even harder to find. As time goes on, discontinued pedals keep getting more rare and increase in value.

Keep an eye on Reverb and eBay if you want to snag one.

ShopGoodwill.com is a long shot, but you can check there as well.

What's the best amp to use with the HM-2w?

You won't need much gain - if any - from your amplifier. This means you'll be using the HM-2w to distort a clean tone.

But that doesn't negate the quality of most amps we'd recommend.

Anything from the following brands could be a good fit:

Any kind of modern-voiced amp with a solid clean tone will do the job.

It's worth the investment if you're using the HM-2w as your primary distortion source.

I wouldn't go this direction if you are looking at it as a backup or a secondary option.

As I've alluded to already, the HM-2w does modern metal and hard rock, and that's it. Don't buy it and assume you'll have some style flexibility. It's really designed for one job, and it executes that job very well.

So in conclusion, the HM-2w has limited application but that's by design.

Don't buy it for stylistic flexibility. Buy it for heavy distortion, sustain, and the styles that apply these sounds.

It's a fantastic pedal.

If you have questions about our Boss HM-2w review, or our review policy and process, I can help out via the comments section below. You can also share your own stories if you've bought and/or used the HM-2w.