The old Guitar Geek rig diagram of Jim Root's Slipknot setup is still surprisingly accurate. He plays through Orange Amps Rockerverb amp heads, a Dunlop wah rack, and a handful of pedals that have remained fairly consistent. For fans of Slipknot, the goal of imitating Root's tone is obvious: Heavy distortion and lots of it. But if you look at Jim's rig, it's not all about heavy gain and metal sounds. He gets his tone primarily from a larger string gauge, low tunings, and EMG active pickups.

Here's a look at that diagram I mentioned, which matches up well with the Premier Guitar rig rundown that is much more recent: To recreate Root's tone, you need to have some aspects of his gear mirrored in your own rig. For example, it'll be difficult to get close to his sound without a heavier string gauge and a low tuning. Slipknot plays most of their songs in drop A and B tunings, so the thicker string gauge is necessary.

I would also recommend a more modern humbucker configuration, preferably an active humbucker pair like the EMGs he uses on his Fender electrics. Once you have this in place, heavy distortion will do the rest of the work.

A quick recap of the must-haves:

Assuming you have these in place, we can move on to the amp settings.

As I mentioned, Root uses Orange Amps Rockerverb amp heads, one as his main and a second as the backup. In the Premier Guitar interview, we get a closeup look of each amp, both of which contain a dirty and clean channel. His dials are marked by a small white dot that's difficult to notice from this picture:

A closeup of Jim Root's Orange Amps Rockerverb amp settings for both a clean and dirty channel.

They're a little hard to see, so here are the actual numbers:

To get all of those heavy drop tuning riffs to bottom out, Root has the bass turned up to 10 on both channels. I wouldn't necessarily recommend this for a home or studio setup, just because it can get muddy and cloudy without the right type of compression and mixing, which is handled by Jim's guitar techs.

It does mean that good Slipknot amp settings will have a lot of thickness and low-end in the EQ, while the variation can come from treble and mids.

Unlike a lot of other metal players, mids take a back seat in this setup. 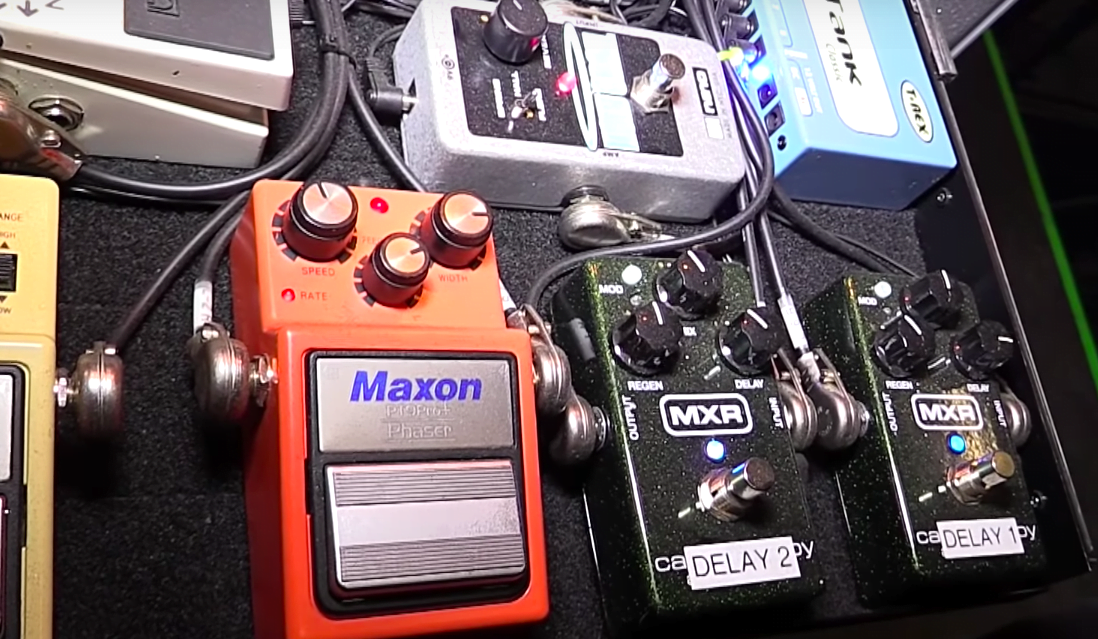 A closeup look at part of Jim Root's pedalboard.

Root's pedalboard is very basic and, like his amp settings, hasn't changed much in the past decade. Highlights include two MXR Carbon Copy delays, an old Maxon phaser, an EHX POG and an MXR Auto Q filter. I used our Pedalboard Planner to build a more clear view of his pedalboard and how everything fits: 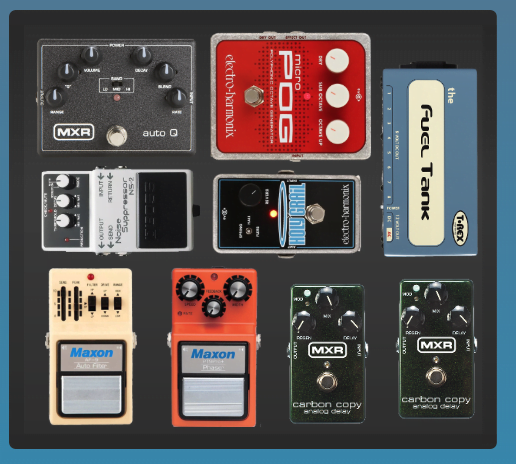 A top-down view of Jim Root's pedalboard I built with our pedalboard planner.

The two Carbon Copy delays look to be used for different settings that he has labeled "Delay 1" and "Delay 2." I honestly can't explain the three auto-wah/octave pedals. Between the Maxon AF-9, the POG and the Auto Q, he's got a lot of pitch-related effects going on. Here's a full list of everything on the board:

All these pedals are stored in a rack system and controlled externally, while none of them have a particularly significant impact on Jim Root's amp settings that he uses with Slipknot. If you get the heavy strings, the lower tuning, and a high gain distortion, you'll have 90 percent of it covered.

When it comes to mirroring amp settings and tone, good gear helps a lot. While I wouldn't say you need to have the exact rig as Root sports, you definitely need to have a decent amp with a metal-friendly guitar. As I mentioned, Root plays Telecasters and Stratocasters fitted with EMG pickups (a unique combination) but I'd aim for something like the Ibanez S Series or a mid-grade ESP LTD.

In most cases, we just have to work with the gear we have, in which case I'd advise start with the amp settings I laid out based on his Rockerverb amps, then make small changes from their based on what you're hearing.

It's never an exact science, so don't be afraid to trust your own ear.

If you have questions about the Jim Root amp settings I've listed here or the gear I've mentioned, feel free to leave those in the comments section below and I'll do my best to help out.