Jimi Hendrix never really had a fancy, signature Stratocaster, at least not when he was actively performing and recording. Had he lived longer, Fender probably would have hooked him up with something nicer than the right-handed Strat we always saw him with.

But Hendrix was only 27 years old when he died, and hardly had a chance to build his career as a musician.

Yet, he's recognized as one of the best - if not the best - guitar player of all time.

For his limited career - Hendrix preferred the white, right-handed Stratocaster that he would string upside down so he could play it with the favored left-handed setup. We'll look at the details of the guitar and some alternatives in this article.

Table of Contents (click to jump)
Want to learn guitar online?
The Hendrix Stratocaster
The Signature Model
The Rest Jimi Hendrix's Gear
Conclusion
What do you think?

What kind of guitar did Jimi Hendrix play? It's a Fender Strat, but it's also complicated. Flickr Commons image via RV1864

Take our quiz to find out which program is most ideal for you.

Would you consider yourself a beginner, intermediate or advanced guitar player?
What's your age range?
Are you more concerned about getting a structured approach to guitar or a wider range of content to access?
Are you a self-motivated learn who prefer working alone, or a social learner who prefers working with a teacher?
Are you more interested in focusing on music theory or just learning to play some songs?
Are you interested in learning a broader range of musical styles or just the basics (rock, blues, pop)?
As an advanced player, do you play more lead, rhythm or a hybrid of both?
How important is it that theory be an emphasis in your guitar lessons?
How important is it that learning songs be an emphasis in your guitar lessons?
How big of a factor is price/membership cost in your consideration?
/
Check Answers
Your Result:
Sorry, no results found.
Please repeat the quiz and try different answer combinations.

The Guitar Tricks program is most ideal for beginners or those who want to delve deeper into song lessons. Try it here
Retake Quiz

Ideal for intermediates or those who want to explore a wider range of styles with high-profile instructors. Try it here
Retake Quiz

A collection of courses and lessons, ideal for the advanced user who wants to purchase standalone courses and delve deeper into nuanced aspects of the guitar. Try it here
Retake Quiz

A platform that accomodates multiple styles and courses centered around a designated instructor who gives personal feedback via a video exchange system. Try it here
Retake Quiz

Hendrix primarily used white '60s Fender Stratocasters, with the slightly larger headstock design. The guitar he played during Woodstock when he performed the Star Spangled Banner is pictured on display, below:

The Stratocaster that Hendrix played the Star Spangled Banner on at Woodstock. Image via Wikimedia Commons

While Hendrix played other guitars, this is the one most often associated with him. Since it was a right-handed guitar (Hendrix played left-handed), the guitar was flipped over and strung for a left-handed player. This meant the low E string was actually brightened up a bit, with the flipped pickups. Higher strings would also come out a little lower with more warmth.

When you think Hendrix, think right-handed Fender Stratocasters with the large headstock design.

In today's world, any kind of Fender '60 Stratocaster model will be fairly close in sound and playability.

Yet, long after Hendrix's death, Fender also developed the Jimi Hendrix Stratocaster, with an upside-down bridge pickup to mimic the polling arrangement we saw in the original Hendrix setup.

This is how Fender chose to setup the signature model instead of turning a left-handed model upside down.

The modern version of Jimi Hendrix's guitar is a right-handed model with an upside down bridge pickup.

Here are some of the highlights of this particular guitar:

You can see from looking at the pictures that not all of this guitar is backwards like the original Hendrix guitar. In other words, it's right-handed, yet made to have some of the features of a left-handed guitar strung up for a right-handed player.

It can get a bit confusing.

The above picture shows a left-handed Stratocaster strung for a right-handed player, which more accurately portrays what it would have been like to play a Hendrix guitar.

Basically, whatever hand you are, flip the guitar over and string accordingly.

I would argue that without the "upside down factor" you lose a lot of the feel of Hendrix's guitar. While he had other models and even other Strats, it was this upside down setup that he seemed to always go back to, and is known for to this day.

What about the rest of his rig?

Before he died, Hendrix was playing through two Marshall JMPs, four cabs, and a few simple effects. Note that in this diagram, the depiction of the guitar is correct in that it is shown to be a right-handed guitar, where the left-handed stringing is assumed. 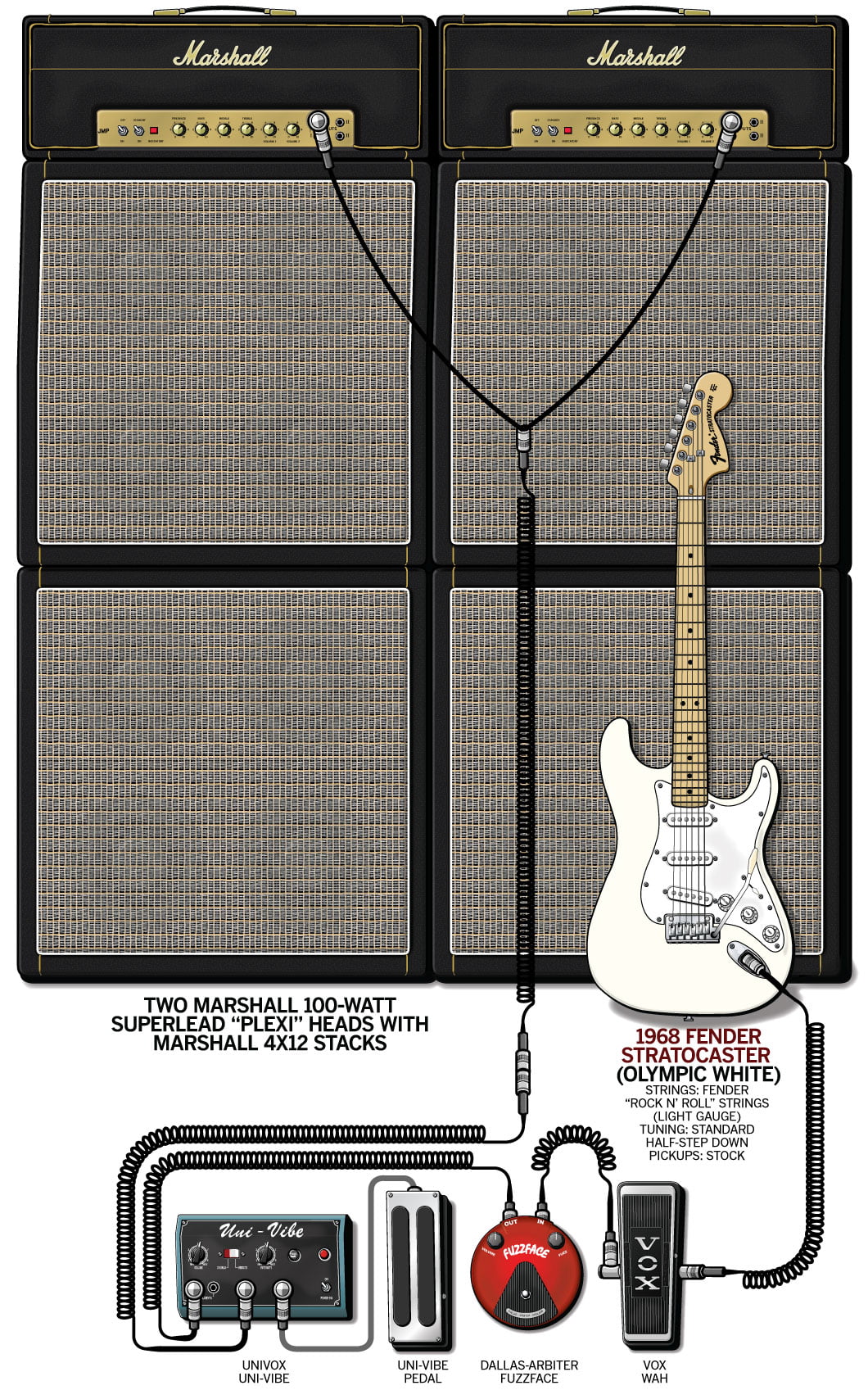 One of the last known iterations of Jimmy Hendrix's live rig, with the right-handed Stratocaster, strung to be played left-handed.

Fender Stratocasters and Marshall amps ruled the day when Hendrix was big, so that's all he ever really needed.

It's a shame that Hendrix didn't live longer. Though it's also amazing that he accomplished as much as he did while checking out at just 27.

He's perhaps the greatest guitar player that has ever lived, and certainly the greatest to never really get a signature model. Even those we do have seems to hold some design elements that are not faithful to Hendrix's preferences.

Because if Hendrix were to build his own guitar, would he still want it to be upside down?

Because even when he started making a ton of money and could afford whatever guitar he wanted, he still kept going back to that upside-down right-handed Stratocaster.

What do you think?

What's your take on this?

Should Fender put out a Hendrix signature model that is more true to how Hendrix played? Maybe move the volume knobs and pickup selector on top of the pickups?

Let us know in the comments section below.

Corrections, stories, other questions, and suggestions are welcome there as well.

Bobby is Guitar Chalk’s founder and a contributor at Guitar World. He has also developed content for PRS, Seymour Duncan and IK Multimedia. You can shoot him an email to get in touch.

Scroll Up
Click outside to hide the compare bar
Compare