What is the difference between lead and rhythm guitar?

What do we mean when we use those terms?

First, it's important to note that those are not different types of guitars, but are terms used to denote roles or styles of guitar playing. It speaks to the way a guitar is played and not a specific kind of guitar.

While some guitars can be better suited for one role or the other, you'll never see a guitar specifically labeled for lead or rhythm.

Instead, here's a basic definition:

Before we get into some examples, let's figure out where you are on the lead VS rhythm guitar spectrum.

Are you a lead or rhythm guitar player? Take the quiz to find out.

We've put together a quiz that helps you break down whether you're a rhythm or lead guitar player. It's just 10 questions and can help you understand the difference a lot more. 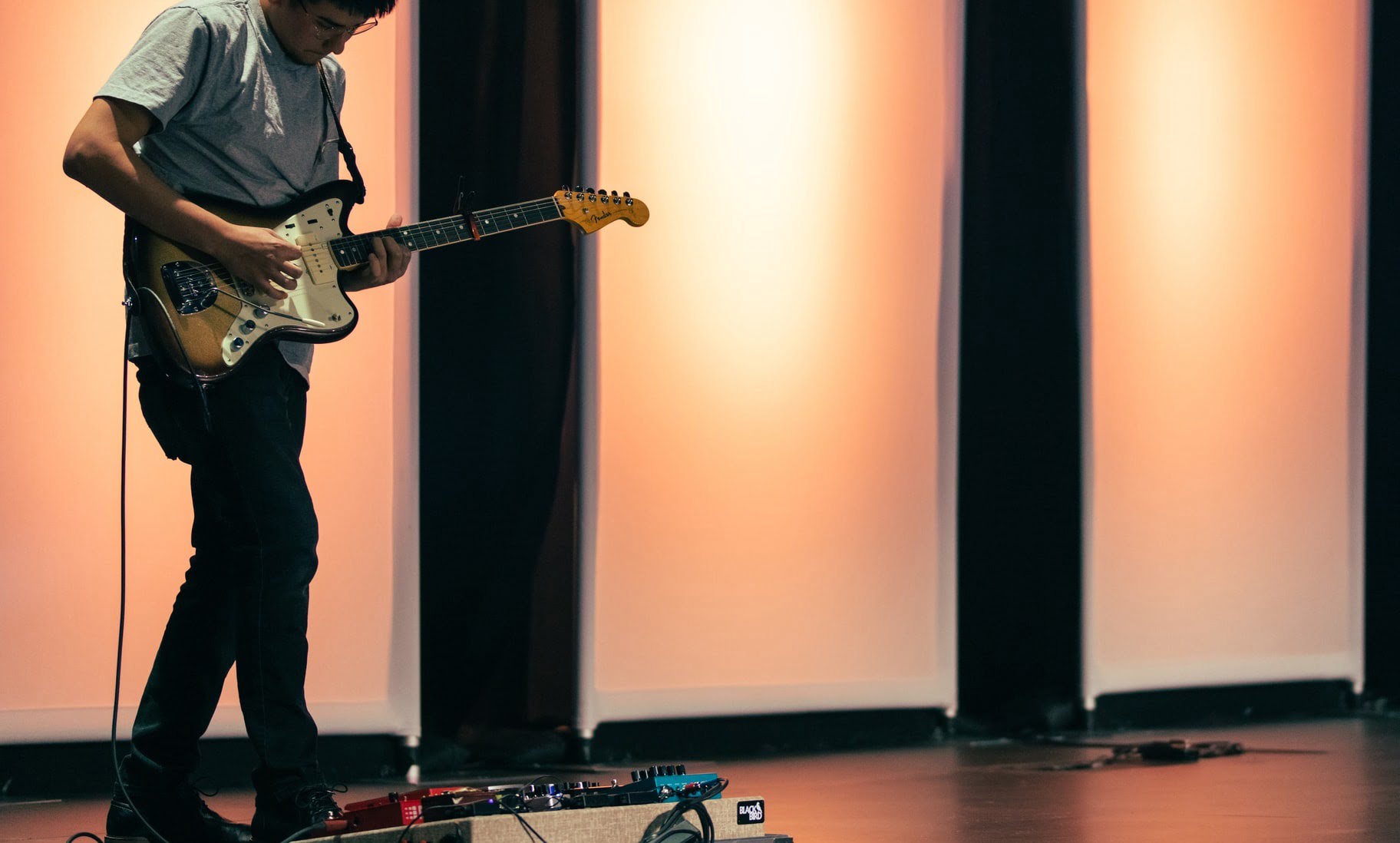 What's the difference between rhythm and lead guitar?

What does a rhythm guitar player do?

A rhythm guitar player should also have a keen sense of timing, allowing them to follow the beat of a drummer and/or the timing of a song.

They should know how to identify the count of a song (4/4, 2/4, 4/3, etc.) and they should be able to play their chord progressions at a certain speed without slowing down or speeding up too much.

Unlike lead guitar players, rhythm players are bound more strictly to the structure of the song.

In this section, I'll provide some examples of rhythm guitar sections of songs, taken from Ultimate Guitar Pro tabs.

The tab below, from "Smells Like Teen Spirit" by Nirvana, uses power chords and palm mutes to create a rhythmic layer that follows the song's main bass line. Power chords are a common technique employed by rhythm guitar players.

In "Wonderwall" by Oasis, we get our rhythm guitar line from an open chord progression played on an acoustic guitar.

Rhythm guitar line from the chord progression in "Wonderwall."

What does a lead guitar player do?

While lead guitar players will still follow a chord progression, they're usually employing single notes, scales, and shorter intervals to create melody. A more classic form of lead guitar would be what many simply refer to as a guitar solos.

In the examples below, we have two lead guitar segments that follow chord progressions, and a third that is just a solo line.

Notice that in all three examples you're dealing with single notes and not full chords.

In this tab you have a short, melodic line in each measure, played by John Frusciante. Though it's based on the bass line in the background, this would still be considered a more prominent, lead guitar melody. It uses single notes in short runs that aren't critical to the structure of the song.

StairWay to Heaven by Led Zeppelin

Again, this melody line follows a progression but isn't foundational. You have single notes in succession that behave as a vocal line.

This tab is a segment of Joe Satriani's solo, which doesn't follow the underlying chord progression, but instead focuses strictly on creating a melody over top of that progression. It's in the same key, but is purely a lead segment - a more classic form of a guitar solo.

What techniques do rhythm guitar players use?

A simpler way to say this:

What are rhythm guitar players really good at?

What are the most common techniques and areas of musical study that rhythm guitar players use? It would include, but is not limited to, the following:

If you're comfortable with this list and if you think it characterizes your playing style, you are probably more comfortable as a rhythm guitar player.

What techniques do lead guitar players use?

On the other side, lead guitar players tend to focus on a different set of techniques and concepts. While the two disciplines can overlap, it's easy to notice a distinction.

This is not to say that a lot of these concepts aren't used in both a rhythm and lead guitar context. Moreover, it's important to note that many guitar players are quite good at both of these disciplines. For example, every guitar player worth their salt should be comfortable with chord progressions and scales.

It's more a question of what they specialize in and what they're most focused on. Another way you could say it: What are they most gifted in?

In a lot of instances you can have a guitar player that's good at both lead and rhythm.

Can it be both?

And many guitar players don't fit the strict definitions of lead or rhythm. Or they might find themselves in a situation where they have to do a lot of both, which is totally possible.

Moreover, there are plenty of concepts that we've listed as lead or rhythm that can apply to both disciplines.

Because even strictly rhythm guitar players need to know scales.

And lead guitar players need to understand bass lines and be able to keep time.

For guitar players that do a lot of both, they tend to be strong in all of these concepts, and less of a specialist on one particular side. This is especially true in bands where you don't have two guitar players, or where a second guitar fills in sparingly.

Here are a few examples of rhythm/lead hybrid guitarists from my slightly outdated music collection:

Just to compare and contrast, here are a few bands that have consistently used two guitar players for lead and rhythm:

It's helpful to see how this plays out in real-life examples. It also shows that you don't have to limit yourself to strictly being a rhythm or lead guitar player. If you want to focus on a specialty, that's fine, but you can go forward as a hybrid of the two styles and see where you trend as you bank more experience with the guitar.

I honestly didn't recognize that I was far more comfortable as a rhythm guitar player until I had been playing for more than a decade.

Now it seems pretty clear to me.

That's the short answer to our main question.

But, if you have questions about the way I've broken this concept down or perhaps an angle that I didn't mention, feel free to leave it in the comments section below. Setting up an account and logging in is the easiest way to do this, if you haven't already.

We'll talk to you there.