Corrected information on the DL4's bypass setup. It is buffered bypass by default, though also allows you to switch to true bypass. Other info and ratings have stayed the same.

Though it doesn't have any analog circuits, the DL4 earns its keep by being extremely flexible, easy to use, and allowing you to bank any mode or setting with three footswitch-engaged presets. These features have made it one of the most popular delay pedals on the market with amateurs and pros alike.

Note that Line 6 has released the follow-up to the original DL4, the DL4 MK2. As a result, the original DL4 is no longer available new from most retailers. You can read our full Line 6 DL4 MK2 review here.

I bought it back in 2014, which you can see on my Amazon account here from the "last purchased" tag: 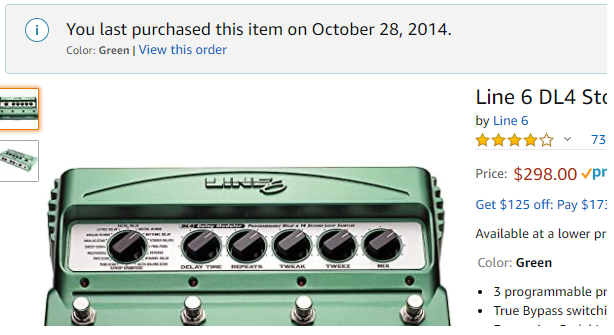 Proof of purchase. From way back in the day.

In this review I'll cover my experience with the popular delay modeler.

We'll talk about the features, functionality, the sound quality, and how I've been able to use the DL4 in a variety of situations. We'll also go over some basic how-to questions that will help you get over the learning curve quicker.

First, let's start with a weighted ratings table for the DL4 that'll help frame some context for our review:

When I updated this ratings table for the DL4, I gave it a higher score for the Cost/Value category, since it has actually gone down in price in recent months, dropping from $300 retail to around $250 in most markets.

We're also giving a solid grade in Bypass Handling and Processing, since it has true bypass as an alternate to buffered bypass. This number hasn't changed since our original review was published.

Even with some small weaknesses, the pedal's score in tone quality and versatility are enough to get it into the 90-plus "Editor's Choice" category.

The DL4, once one of the most popular high-functioning digital delay pedals is seeing more competition in recent years from Strymon's delay boxes, primarily the large Timeline and smaller El Capistan. These two pedals, though more expensive than the DL4, are also worth considering if you're in the market for a digital delay pedal with a lot of tinkering power.

Our video demo is just a simple run-through of all the delay algorithms in the DL4 with some basic tweaking. While this certainly doesn't showcase all of the pedal's potential, it gives you an idea of what you can expect if/when you pick one up for yourself.

We've been able to take some good pictures of the DL4 since we have this one in the office. My apologies for the scrapes and stickers on the unit. This one has gotten a lot of use over the past few years. 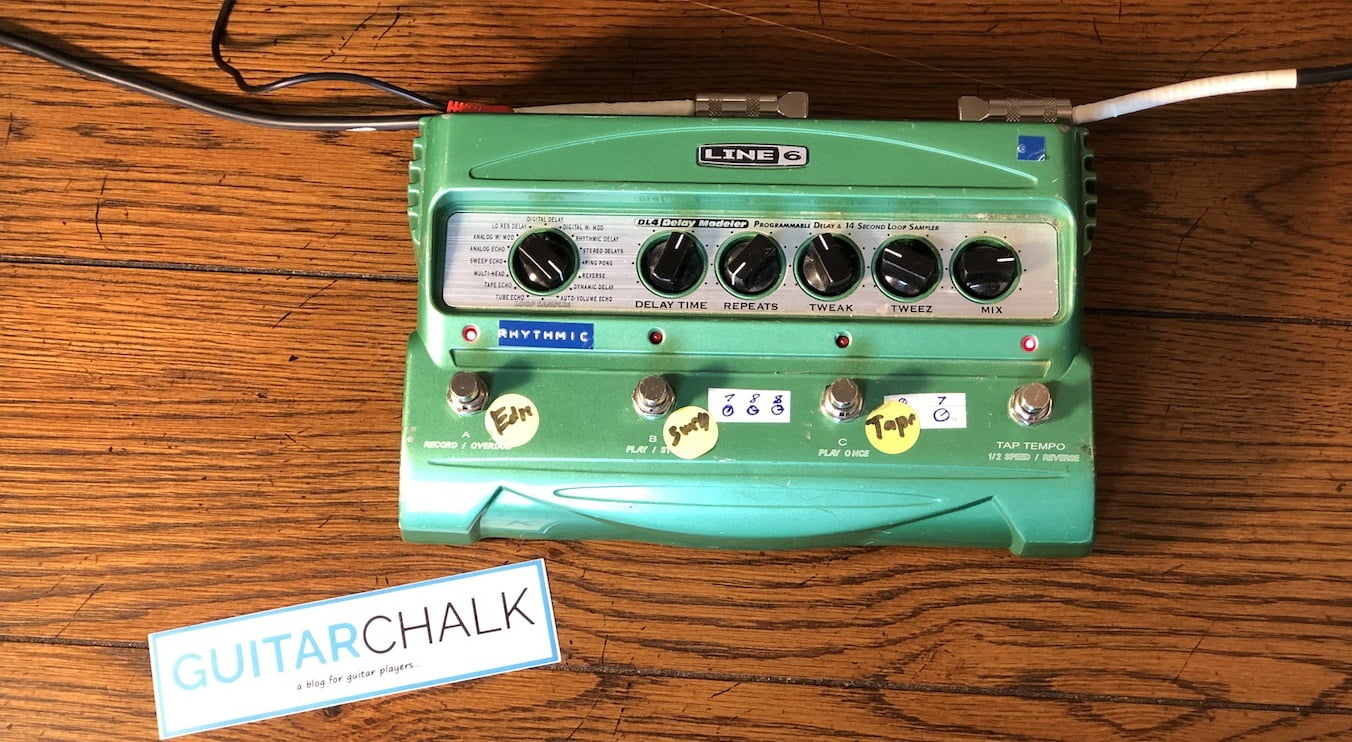 The Line 6 DL4 hanging out on our dining room table. Images via Guitar Chalk Media LLC

IDEAL FOR: Playing live, recording, pop, rock, and most modern electric guitar pedalboards, both on the rhythm and lead styles

In the following box we've aggregated all of the major review sites for this pedal and compiled them in a filled bar to give you an idea of how much critical/positive reception the DL4 gets. Out of 346 total review (as of August 2020), the DL4 has pulled in 301 positive takes, which is at least three out of five stars or higher.

The next graphic is a plotting of the Line 6 DL4's price over the past few years on Reverb. Since Reverb is primarily a used guitar gear marketplace, these prices are a good deal cheaper than typical retail. However, you can see the bump earlier in 2020 where the price went up from around $135 to over $160.

Pricing history of the Line 6 DL4 over the past few years. Pulled from Reverb

Table of Contents (click to jump)
Line 6 DL4 Review & Comparison Table
Our DL4 Demo Video
The DL4's Effect Quality and Sound
Functionality and Features
Value of the Line 6 DL4
Who would we recommend it to?

The DL4's Effect Quality and Sound

In my opinion, and experience, the strongest delay algorithm on the DL4 is the RHYTHMIC mode which gives you a tight, percussive delay that can be clearly and easily timed on the fly with the tap tempo button.

Using the RHYTHMIC Delay and Setting the Tap Tempo

Follow these steps to setup and test the RHYTHMIC delay mode on your DL4:

Here's a quick shot of how I usually start out with the RHYTHMIC DELAY mode on my DL4: 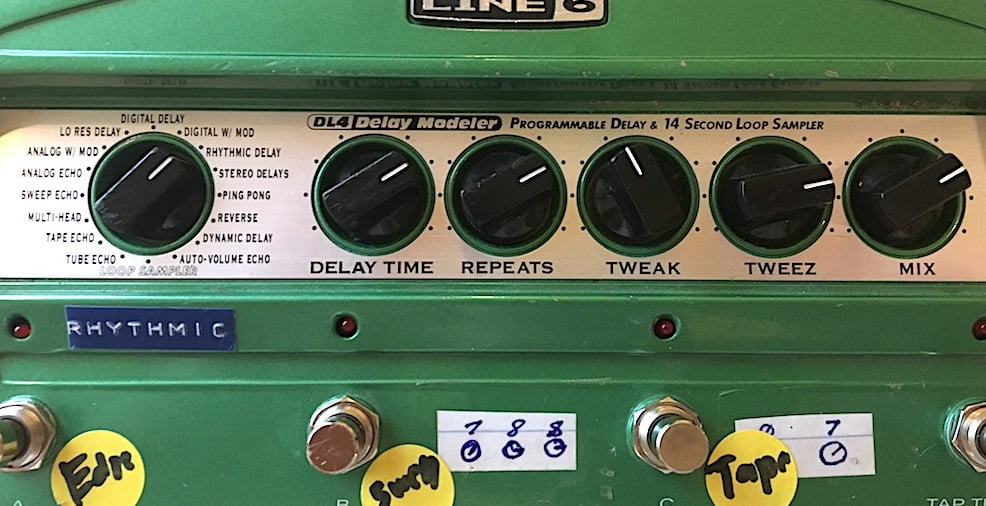 Some good "out of the box" settings for a percussive delay using the Line 6 DL4 and the Rhythmic delay algorithm.

I've also really liked using the REVERSE mode and the AUTO-VOLUME ECHO, two things that you don't typically think about having in a delay pedal.

If you turn the MIX all the way up on the Auto-Volume Echo mode, you can get a really natural-sounding volume swell, which I used on this Tool cover for the intro on "Fear Inoculum:"

You'll need to keep in mind that as you're making adjustments to your sounds with the controls, the delay time, repeats, and mix knobs will have the most profound impact on your sound, while the TWEAK and TWEEZ knobs will function differently depending on which mode you choose.

For example, on the delays with modulation modes, those two knobs (Tweak and Tweez) function as rate and depth controls for the modulation.

On some modes, they don't have any function.

You can refer to the DL4 user manual for a list of what the Tweak and Tweez knobs do for each mode.

Overall, the sound quality is good and on par for what you'd expect out of a digital delay. It doesn't sound as good as the Strymon Timeline, nor does it meet the tone quality of the nicer analog delay pedals on the market, but it's still above average, with functionality to make up for the lack of tonal fabulosity.

Here's one more audio-only demo we did with the DL4, pairing with a Walrus Audio reverb pedal:

As we've already mentioned, the DL4 is primarily controlled by five knobs, three of which we'd expect out of any good delay pedal.

This is where the bulk of your control comes from, though the DL4 also gives you some additional functionality, namely the following:

Of these three features the tap tempo is - by far - the one I've used the most. The looping adds a lot of flexibility to the unit as well, though I just didn't find myself using it as much with an electric guitar. I do know players who are primarily acoustic artists that enjoy this feature a lot.

Back Panel and Connections

If you turn the pedal around, you'll see that the back panel provides some notable functionality, namely a stereo input and output connection:

Expression pedal connection and stereo i/o on the Line 6 DL4.

We've never tested the expression pedal, though depending on the particular type of expression pedal you pair it with you can control different control mechanisms on the fly. Since the tap tempo changes the delay time already, we'd imagine controlling the repeats or mix would be the only useful applications for expression.

How to Hook Up the Stereo Connection

In most cases, a single guitar pedal will run a "mono" connection, meaning you'll run one instrument cable in and a second one out of the pedal. If that's how you're setting up the DL4 (which in most cases you will be), use the input and output labeled "MONO/L."

A second less common configuration is to run two lines out of the pedal, perhaps to two different amplifiers.

In this case, you'd run your input into the MONO/L jack and then run two instrument cables from the left and right output jacks on the back panel of the DL4, pictured above.

Though we'd still consider the DL4 a good value, the increase in price over the past couple years has somewhat cut into our enthusiasm.

On Sweetwater, the Line 6 DL4 typically goes new for about $250.

We still think the DL4 is a strong enough delay pedal to be worth the $250.

We've also bumped the score in the value column up to 81 where it previously sat at 78, when Line 6 had the pedal priced at $300. If it were to drop the price back down towards $200 or even lower, where it once comfortably sat, we'd up that score even further.

Currently, it's a small over-payment, though not enough to keep us from recommending the DL4 in a lot of situations.

Who would we recommend it to?

And this begs the question:

In which situations and scenarios would we recommend the DL4?

For starters, this pedal is extremely useful and helpful in a live context. Particularly for small gigs or even church worship teams where you're playing a lot of rhythmic electric guitar, a pedal like the DL4 will get plenty of use.

We also like it for acoustic artists, especially if you do looping or any kind of background rhythm work.

It will also have a lot of appeal in a more traditional context, for a lead electric guitarist that just needs some ambience and some subtle delay tones for their melodies or rhythm riffs. At $250, it's still one of our favorite delay pedals to recommend.

Do you have questions about the Line 6 DL4 or our review process? If so, feel free to leave them in the comments section below and I'll help out as best I can.

Written by Bobby on Delay Pedals with Dotted Eighth Mode