Our pick: Either one

The Martin D-28 is the original, while the HD-28 is a slightly improved version of that same guitar. Aside from bracing structure, fretboard inlays, and some minor tone differences, the guitars are essentially a mirror copy of one another.

The Martin D-28 acoustic guitar has been around for a long time and has even been a favorite of professional artists (lots of them) over the past few decades. But Martin buyers are often confused by the presence of the HD-28, a similar model Martin acoustic without obvious differences from the D-28.

What's the difference between them?

In this comparison article, we're putting the two guitars side-by-side to see exactly how they differ.

Surprisingly, there's little that separates the two acoustics in terms of quality.

Both are excellent guitars in every category.

However, there are a couple notable differences if we look at both spec sheets.

We've listed the current retail price of these acoustics in the table below with the demo videos. They're separated by just a couple hundred dollars, with the D-28 landing as the cheaper of the two.

Here are the only features we were able to identify that could account for the pricing difference:

We'll get into these details as we work through our comparison. However, if you were only after the bullet points, you can browse the acoustics on Sweetwater with some comparable options via the orange buttons below.

Compare to Other Acoustic Guitars

We partner with Sweetwater to offer guitar gear at no extra cost to you. If you like our work, the best way to support us is through buying your gear at Sweetwater via these links.

Table of Contents (click to jump)
Compare to Other Acoustic Guitars
Demo Comparison
The Bodies: Aging Toner and Scalloped Bracing
Comparing the Neck & Fretboard
Hardware and Parts Comparison
Wrapping Up Our Comparison

In this simplified table, we've embedded demo videos of each acoustic so you can compare the overall sound and tone.

Even with different setups, you can tell these two guitars sound almost identical. To me, both sound distinctly country and bluegrass, which is consistent with many of the reputable artists that have played them. We might say the D-28 is a little more brisk, perhaps giving more definition to your pick scraping and right hand movement.

But overall, you've got to get really specific if you want to identify sound differences between the two.

They're both bright, crisp, and less booming than you would expect from a Martin acoustic.

Overall, both guitars strike a really nice balance between brightness and warmth.

The first difference we see in the bodies of both guitars is that the top tonewood in the D-28 is listed as having an "aging toner." In some pictures, this seems to be exaggerated, but we have noticed that the D-28 looks slightly more weathered, depending on how the light hits it.

We've highlighted this difference in yellow, since it's not consequential in terms of quality or value. Otherwise, both guitars use Sitka Spruce tonewood for the top piece, with East Indian Rosewood making up the back and sides.

Scalloped Bracing in the HD-28

In some contexts, this isn't really even a quality issue. Scalloped bracing usually means that luthiers shave or carve a divot into the middle piece of the bracing, which adds more flexibility to the body and puts a little more bass in the guitar's natural tone.

This would account for the slightly more brisk sound we have in the D-28, but it's still not a significant quality issue or concern.

You can see from the images below, there's nothing obvious to the naked eye when you compare the two bodies. Even with the closeup view that Sweetwater gives us, the two guitar's bodies essentially mirror each other. 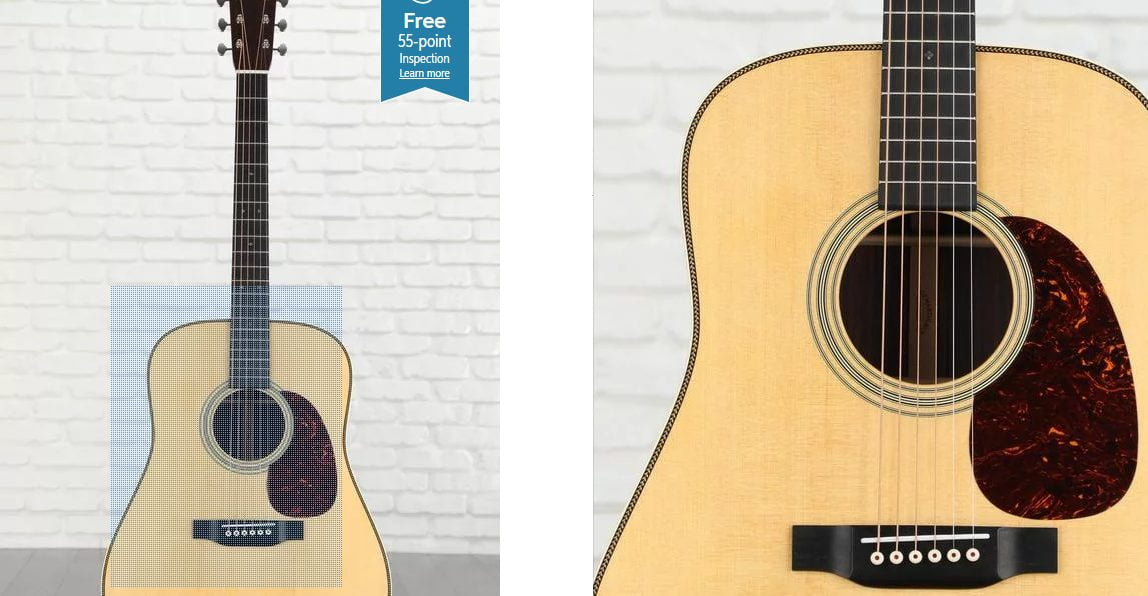 Moving to the neck and fretboard, distinctions are - once again - limited.

Outside of the diamond fretboard inlays in the HD-28, the two guitars are identical in terms of size, shape, and materials. We do like the diamond inlays quite a bit, as it gives some noticeable aesthetic distinction between the two.

Again, we can use the magnified view in Sweetwater, which gives us a nice closeup look at the fretboard inlays. While the diamond design isn't really a deal breaker one way or the other, I have to admit that it adds a uniqueness and appeal that is lost in the familiarity of the pearl-dot inlays.

The neck and fretboard on the D-28.

Neck and fretboard on the HD-28.

When we do electric guitar comparisons, there is typically more here to draw on with pickups and interior electronics. But with acoustic guitars, there are just a few things we look at. Moreover, with the HD-28 and the D-28, there are zero discernable differences between the two.

Perhaps one of the nicest features here - and one that could easily go under the radar - is the hardshell case that comes with either acoustic (we've included it in the "parts" section since there's really no other place for it).

In this price range, that's not an unusual add-on, but certainly worth mentioning for prospective buyers.

I'd hate to invest this much money into an acoustic guitar to let it go without a case.

Wrapping Up Our Comparison

At the end of this comparison, my subjective take is that the HD-28 isn't a significant upgrade over the D-28. The bracing is little nicer if you want a deeper tone - and I like the diamond inlays - but it seems the HD-28 is a marginal upgrade at best, with out any major improvements.

It's certainly not something I would want to run up the price of an already expensive acoustic guitar for.

After looking at everything, I'd recommend going with the classic in the D-28.

Again, they're both great guitars, but I would need more that separates the new iteration from the original before I break with the original.

Do you have questions about the Martin D-28 or the HD-28?

If so, leave them in the comments section below. I'll jump in and do my best to help out.