Kurt Cobain was one of the most influential musicians of the early '90s, as he paved the way for an entire genre of music. This genre was largely based on the distortion sound used by many of the musicians during that time span. It became known as the "grunge" era.

But which pedal did Kurt Cobain use to create the grungy Nirvana sound?

There were primarily two that he used over the years:

Sometimes he used them on their own while other times he would pair them with the dirty channel on his amplifier. He also had a SansAmp box that he used here and there.

In this section we've built a comparison table with a tool that lets you compare the distortion pedals Cobain used to a couple other similar options.

We use links to our partner Sweetwater to support this site at no extra cost to you. Please consider using these links as a means to help us keep our content going without aggressive advertising.

Thank you for your support.

The softer side of Kurt Cobain, back in the day. Flickr Commons image via Glen Colen

Cobain liked simplicity, though he also had less gear available to him than we do today. As a result, he used the Boss DS-1 distortion pedal, almost exclusively until right before the end of his life, when he upgraded to the DS-2 (more on that later).

Here's a simple look what the Boss DS-1 looks like from a product catalog. It hasn't changed much since Cobain used it: 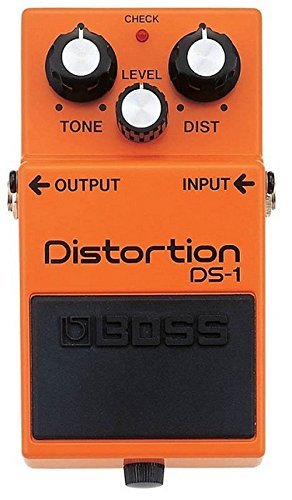 It can look more or less orange depending on the lighting.

The DS-1 distortion is a simple pedal with a digital circuit that produces a smooth, tube-esque overdriven tone. In combination with his Marshall amplifiers, this was his primary distortion source for the most formidable Nirvana years.

You can read our review of the Boss DS-1, or browse it on Sweetwater via the links below:

Near the end of Cobain's career - and unfortunately his life - he switched from the DS-1 to the Boss DS-2 Turbo. This can be seen in a diagram of his rig from the Guitar Geek gear database: 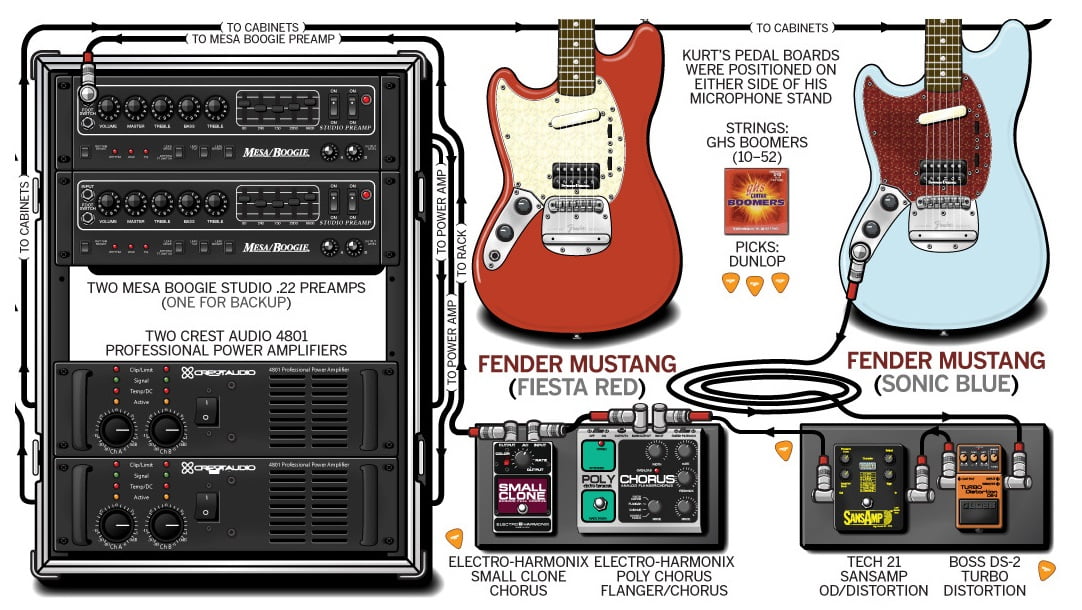 You'll notice from the graphic that Cobain also used a Tech 21 SansAmp OD/Distortion pedal, though this didn't get nearly as much attention as the Boss boxes.

What's weird about his upgrade to the DS-2, is that the DS-2's only difference from the DS-1 is the "Turbo" mode, which Cobain reportedly never used. 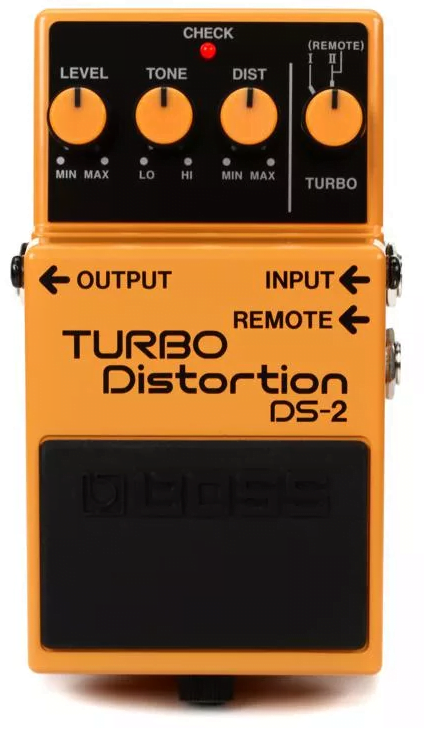 Turbo mode in the DS-2

Perhaps if he had continued his career, he would have made more use of the Turbo mode. But by most accounts - particularly his guitar tech - Cobain just used the DS-2 in the DS-1 mode with the same sound and settings he had before.

Below, you can read our article comparing the DS-1 and DS-2 in a side-by-side analysis.

You can also browse the DS-2 on Sweetwater, as before.

These are the two distortion pedals Cobain used to create Nirvana's sound.

He didn't ever really expand his rig or use anything fancy. In a lot of ways, his tone and distortion were really simple. He just found stuff he liked and played it without a lot of fuss.

For those wanting to re-create the Nirvana sound, the DS-1 or the DS-2 are simple (and affordable) ways to get there.

Do you have questions about Kurt Cobain's distortion pedals?

Or maybe you want to point out something we didn't mention here.

Either way, feel free to drop a note in the comments section below and we'll be in touch.

See you there, friends.