Our pick: The Orange AD30

The TH30 is a good amp, but we'd always prefer to have extra channel flexibility. Since the AD30 provides a more comprehensive list of EQ options for both its channels, we're fine putting up the extra money for it.

The Orange TH30 and AD30 are two extremely similar amp heads. But on this page, we'll look at the two tube amps side by side to see where they differ, and to help you determine which one would be more ideal for you, if you're trying to decide between the two.

Both are tube amps with two channels each, but are there other differences that aren't as easily spotted?

In the spirit of getting to the point quickly, we like the AD30 better.

If you're okay with taking our word for it, refer to the quick comparison and spec tools below. For those wanting more information, continue reading on and we'll expand on the details, and our reasoning for preferring the AD30 over the TH30.

We've added Sweetwater links for both these amplifiers, which also help us support the Guitar Chalk project at no extra cost to you. You can also use the compare buttons to see both amps in a table, side by side. If you have additional questions, drop those in the comments section below and we'll help out as best we can.

The TH30 and AD30 have a lot of similarities, but significantly part ways when it comes to tube type and EQ arrangement.

The Orange AD30 VS the TH30. Which one is the better option? 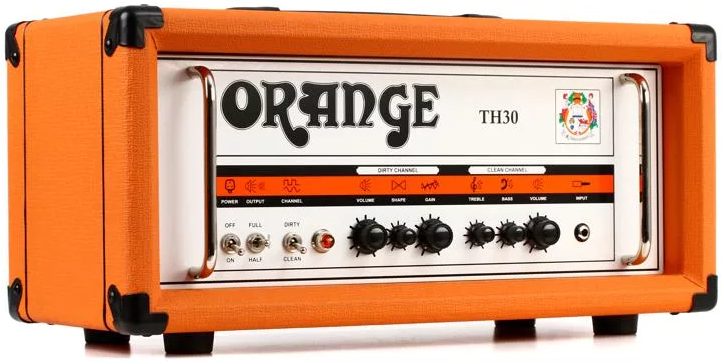 The Orange TH30 has two channels, but a less comprehensive control scheme.

The TH30 uses ECC83 tubes in the preamp and has an effects loop on the back panel. But the biggest difference is on the front control scheme, which is fairly scaled back, with a dirty and clean channel. It looks at though you get a two-band EQ for the clean channel, and then a single-band shape control on the dirty channel.

This likely means the amplifier borrows from the clean channels bass and treble EQ settings to produce the dirty channel's final tone.

Ultimately this makes it less flexible than the AD30.

We'd much prefer to have autonomous EQ controls for both channels, and a gain control for each one, like we see in the AD30.

From a tone quality perspective, there isn't a ton of difference, though it is worth noting that the AD30 has 12AX7 tubes in the preamp, which is the American version, while the ECC83s in the TH30 are the British version. Technically there's not much difference between the two. 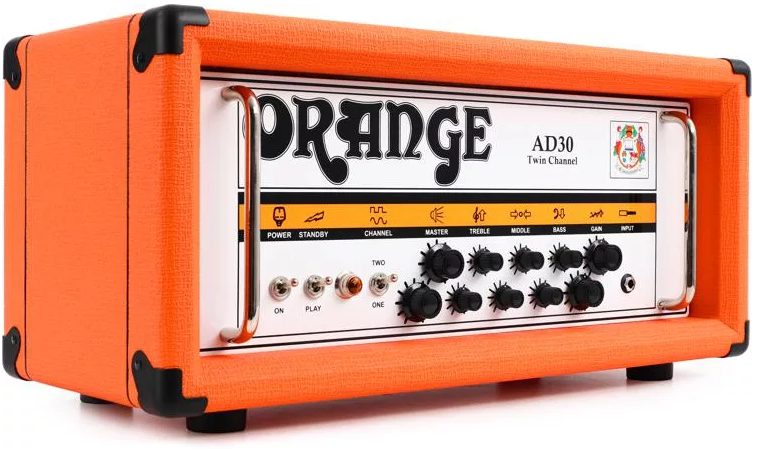 In stark contrast, the AD30 provides two channels that are fully equipped with master volume, gain, and a three-band EQ - one for each channel. This gives you significantly better control over your two channels and is ultimately a more functional setup.

You do lose the effects loop in the back, while there's also a different tube configuration to consider.

The 12AX7 tubes in the preamp sound a little better to us. They seem heavier and more percussive. Again, there's some subjectivity there because the tubes are technically the same. Differences in tone could be related to other factors as well.

Based on the flexibility and improved control scheme, we'd argue the AD30 is worth the extra $300.

The TH30 is a great amplifier and we don't have any complaints about the tone. Orange Amps always do a great job of giving you a nice balance between vintage and modern - heavy and subtle. But we like the AD30 a lot better here, in a direct comparison, because of the improvements made to the control scheme.

Having two completely autonomous channels is always a better arrangement.

We'd recommend paying the extra cost and getting the AD30.

If you have questions about the AD30 or the TH30, or about how we do these comparisons, feel free to drop those in the comments section below and we'll do our best to help out.

Written by GC Editorial on Amps and Comparisons