What's the Difference Between Phaser and Flanger Pedals?

Phaser and flanger pedals have a lot of similarities, particularly in regards to how you would describe their sound. Both create a swirling, plane-flying-overhead effect using a slightly out of phase signal and filters.

They're also both a type of modulation, which is an effects category for waveform manipulation.

They have a lot of notable differences from one another, both in terms of the sound they produce and their technical descriptions.

In this article, we'll cover those differences in depth.

Let's fist look at how we would describe the sound of each pedal. 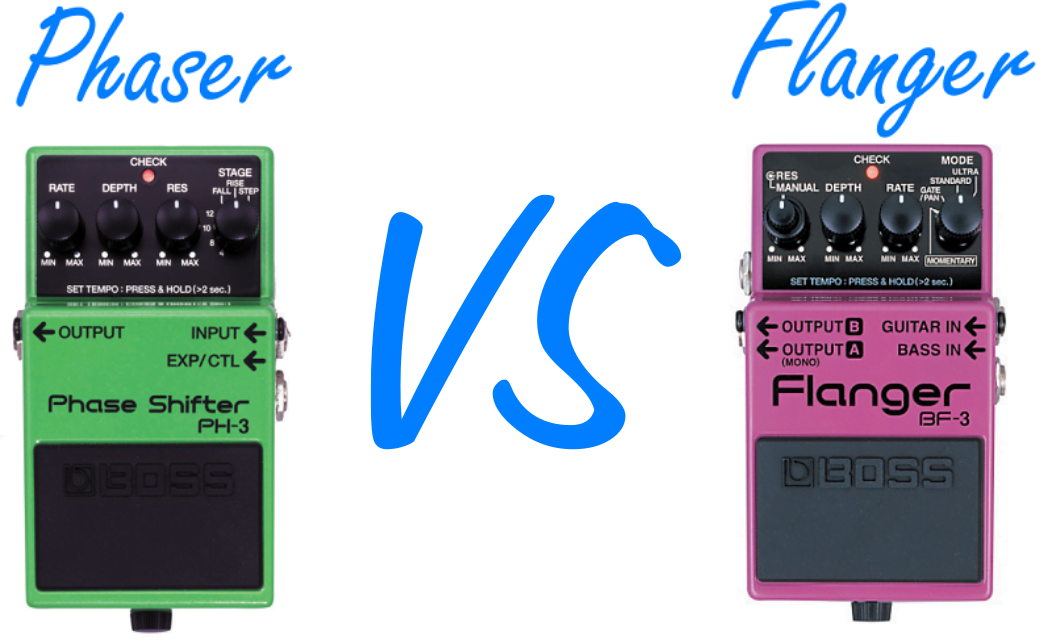 Phaser VS flanger pedals. What are the differences?

Both pedals produce a swirling effect, which can be either sped up or slowed down.

Here's what this sounds like in a flanger pedal:

And here's the phaser:

While the difference is subtle, it's also clear that the flanger has more of a chorus-sounding quality to it. This is because of the way the signal is filtered using delay, which creates harmonic copies of the original signal (more on this in the technical section). The phaser is smoother and gives off less of the de-tuned quality that chorus and flanger pedals share.

The swirl of the flanger is also a little thicker, and feels more like it's taking a chunk out of the signal's clean tone.

This is why having a mix knob on modulation effects can be really helpful.

They allow you to control the ratio of wet to dry signal coming out of the pedal.

The phaser effect is less intrusive, though still easy to hear as it travels between the peaks and troughs of the waveform.

For those that really like geeking out on signal processing and the inner-workings of guitar pedals, the differences between phaser and flanger pedals presents a good opportunity to do so.

We'll use bullet points to summarize the technical differences between the circuits used in each pedal.

Since the all-pass filter is not a delay line, this preserves the phaser pedal's definition from the flanger, which does use a delay line in its filters.

Here's what the phaser circuit looks like in a diagram:

Diagram of all-pass filters in a phaser effect circuit. Image via Wikimedia Commons

You can see in the diagram that the signal is split, runs through the all-pass filters (which usually numbers between two and eight filters total) and is then rejoined, thus creating the out-of-phase output.

We've already mentioned that the flanger uses a delay line which excludes it from a proper phaser definition, but let's look at some of the additional technical characteristics of a flanger's circuit.

Like the phaser, this results in a series of peaks and troughs. Yet with the time-delay aspect, these peaks and troughs occur in a harmonic series, thus giving you the chorus or slightly de-tuned effect.

This is also referred to as a "comb" filter.

Since the flanger has the harmonic aspect to its sound, and a slight variation in pitch, it often gets used more like a chorus pedal than anything else. In contrast, the phaser pedal fits more into the realms of modern rock and country, particularly as a complimentary layer for melodic verse riffs and solos.

Both effects have a wide range of variation based on their speed control, where high speed settings create a pulsating, warbling effect. Lower settings create a more subtle, almost "clear" layer of modulation.

Additionally, both pedals are most commonly employed over top of a clean electric guitar signal.

Phaser pedals can also show up in rhythmic funk styles and even some bass rigs.

If you want to paint in really broad strokes, flanger pedals are often used in a rhythm context while phaser pedals are used in a lead guitar context. However, the crossover between those two categories is quite common.

On the surface, the differences between phaser and flanger pedals are hard to identify clearly.

Yet, when you start to dig into the two effects, you can easily see the distinctions.

If you're trying to decide which one you prefer, pay close attention to the harmonic series in the flanger. Whether or not that appeals to you will say a lot about which effect you might be more likely to like and use.

It's also true that both effects have an extremely wide range of applicable scenarios, covering multiple styles, musical genres, and guitar playing habits.

If you have questions about how phaser pedals work, how flanger pedals work, or how they're different, feel free to leave those in the comments section below.

How to Use a Phaser Pedal (effects order & settings)

Written by GC Editorial on Pedals and Info

How to Use a Phaser Pedal (effects order & settings)