It takes awhile to get the controls figured out, but once you do this is one of the more unique pedals I've used in recent memory. It's even a bit difficult to categorize. Filter? Ambience? It's essentially adding compression to volume swells, with some ambient layering. The Gloamer is a great option for next-gen rock pedalboards, and a must-have for those managing a lot of ethereal sounds from an electric guitar.

It's not often that I get my hands on a pedal that's difficult to categorize. But the Gloamer has a foot in several camps, primarily:

To simplify: The Gloamer is a dedicated volume swell box, with compression that responds to your picking attack. The swells can also have a trail that can be controlled by a decay knob, which you can switch on or off.

I've honestly never used a pedal like this one. It's not quite as diverse as it sounds - as in it's not a multi-effects pedal.

Rather it's a well-thought out combination of a few effects that do a great job of highlighting and expanding on the pedal's main role.

I reviewed the Pigtronix Gloamer first-hand, and I'll share my full take here.

All our reviews, roundups, and recommendations are opinion. However, we only review and recommend products that we can verify are worth your attention. Note that we partner with music retailers to support ourselves, but at no extra cost to you. If you need to buy gear, consider supporting us through our orange button links.

The Gloamer is a unique blend of volume swells, synthesizing, and compression built on an analog circuit.

If you want to skip my rambling, we've put together some pricing tools that will allow you to track the Gloamer's retail from a couple different vendors. Currently the only two places we've been able to find it are Sweetwater and eBay.

This tool lets you use your email to be alerted when and if the Gloamer reaches a particular price. We usually recommend setting these around 15 percent below retail, but you can pick any number.

Price history is plotted on this graph based on the retail cost of the Gloamer, as it changes over time. If you only see one bullet point, it means the graph has not been up long enough to record any changes in price.

I was shocked to see that this pedal is analog. Though I suppose it makes sense, given that the base functionality of volume swells and tremolo sounds are easy to work up in an analog circuit.

This is why you often see these effects on amplifiers - even tube amps.

The same is true of reverb.

The Gloamer focuses on a mix of volume swells, ambience, compression, and modulation. All of this sits on top of an analog circuit.

Here are some of the qualities I would use to describe the volume swells:

Tremolo is basically just a fast in-and-out volume swell, so you can dial in something that I would describe as a flutter effect. But personally, I liked the more ambient side of the pedal, as opposed to the modulation side.

The optical compressor is what made the tone a lot more punchy, and allowed you to really use some pick-trigger technique to manage intensity. It also let you control the sustain, which can either fade out really quickly or hang for a lengthy decay.

I often found myself balancing out the compression, because I didn't want quite so much aggression. I also had trouble calming my pick attack in some cases, which I'm admittedly bad at generally.

But the compression adds a surprising amount of flexibility, which is helpful for an effect that's somewhat out of your control after it starts moving.

To be clear, I don't think this is intended to be an ambient pedal in the classic sense.

But it does produce some elongated trails, like a reverb pedal. This gives it an ambient quality, which can be controlled with the decay knob and by dialing in more sustain. That faux reverb tone also helps to set it apart from something like the Line 6 DL4's volume swell mode which doesn't sound as ambient as the Gloamer.

The Gloamer's ambience does a good job overall of promoting the volume swells, and avoids covering it up.

It's very subtle, but it's definitely a big part of the pedal's appeal.

In a world where the electric guitar is becoming more and more ethereal, the Gloamer has a ton of opportunities to be useful. It's going to be most comfortable in modern rock, next-gen rock, modern pop, and even some metal settings where clean tones are used to contrast with heavier distortion and lower tunings.

But you could even go more broad and say that just about any musical style could benefit from a pedal like this.

Its very versatile while also be very specific. 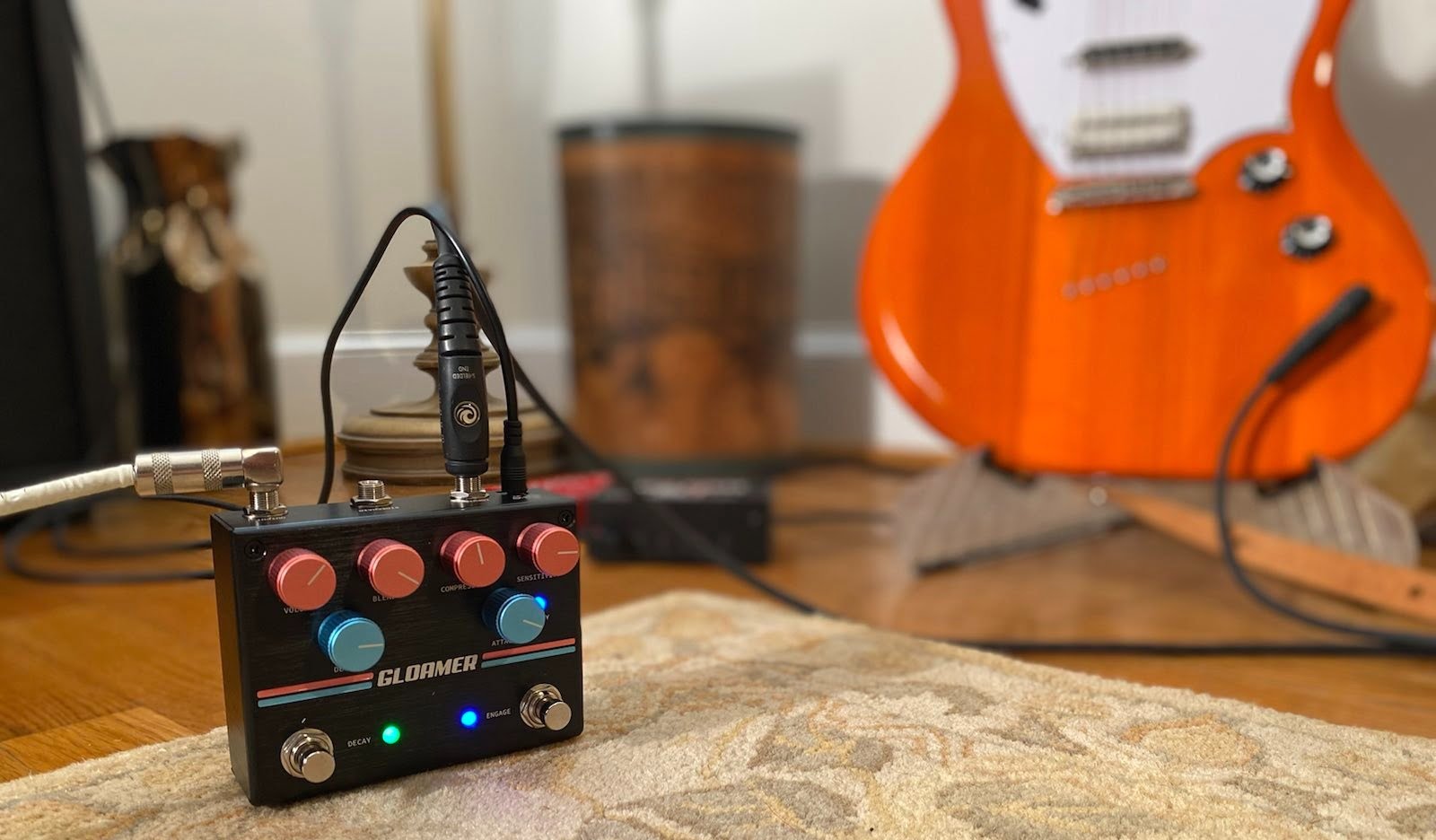 How it Compares to Other Similar Pedals

Since the Gloamer is hard to categorize, it's also really hard to find comparisons.

Delay pedals with volume swells are a good place to start. As I've already pointed out, the Line 6 DL4 MK2, and the original, are the main two that come to mind.

You could also draw some comparisons to the Strymon TimeLine and BigSky, as well as some analog tremolo pedals like the JHS Kodiak.

The Strymon Flint is another good comparison since it combines reverb and tremolo, though it's not a volume swell pedal either.

The main difference between those pedals and the Gloamer is that those pedals are more focused on a single effect, often with multiple modes or algorithms. The Gloamer instead eliminates multiple modes and chooses instead to add a ton of variety by using additional effects that are fitted to benefit the core functionality of volume swells.

Getting a hang of the controls wasn't particularly easy for me, but that's not saying much. I tend to fumble around controls and gravitate towards particular sounds. But for my review, I forced myself to move around and test the controls more thoroughly

Sensitivity, decay, and blend - which is the mix control - are the three controls I found myself using the most, especially the mix.

In my opinion, just about every guitar pedal should have a mix control, letting you balance between dry and wet signals when using the pedal.

Quickly, here's a list of controls on the front panel:

Extensive control is certainly a strength of the Gloamer, which you can gather from a quick look at the front pedal.

In some cases, the changes in settings seemed really subtle, like they didn't have much impact on what was happening.

Other times, the changes were more drastic and I ended up dialing it back. I'm willing to bet I didn't take full advantage of what the pedal can do, since I tend to move back to the middle of each extreme. But there's no question the pedal is flexible.

You might need to take some time to figure out the controls, but once you do you'll have plenty of variety to work with.

Since the Gloamer doesn't really have multiple modes, I'd like to see a modest drop in price, maybe closer to $220-$230. But part of the reason for a lack of modes is the analog circuit, which still gives you a ton of flexibility.

If you play an ethereal style and you're more of a modern guitar player, you'll still get your money's worth with this pedal.

As I've alluded to several times, next-gen players and those dabbling in a more ethereal style - particularly as lead guitarists - are going to benefit most from the Pigtronix Gloamer.

Jazz, blues, and classic rock are going to have far less application for something like the Gloamer pedal.

I would also recommend that those wanting a more traditional volume swell or tremolo effect go with something else, just so you aren't paying for extra features that you won't use.

Pigtronix always does a great job of combining effects without just creating a simple multi-effects pedal. Their combinations are extremely well-thought out, and designed to work together as opposed to separate entities packaged into the same box.

Without hesitation, we'd recommend it to those who would use the volume swell and the added flexibility stemming from the ambience and compression twist.

If you have questions about our Pigtronix Gloamer review, we can chat in the comments section below. You can also share your opinion and perhaps your own experience with the Gloamer.