Our pick: The PreSonus Quantum

These two high-end interfaces are fairly similar in terms of quality and functionality. Though the PreSonus Quantum would be our pick for the Thunderbolt connection, and a few extra I/O options.

These two audio interfaces from PreSonus and Focusrite are extremely similar. Unless you have some measure of brand loyalty to one or the other, there aren't many disadvantages we would identify with either interface.

The Clarett 8Pre is cheaper, though with a few less I/O options and the USB connection instead of the Thunderbolt.

We like having the Thunderbolt connection, especially when the price difference is so small.

For this reason primarily, we'd recommend the PreSonus Quantum.

If you don't need that many inputs, you could downgrade to the Focusrite Clarett 4Pre which is around $650, a far cheaper alternative if you don't need as much firepower as these larger interfaces.

Where PreSonus and Focusrite Differ in Quality

The PreSonus Quantum seems to do a little better with latency handling while the Clarett boasts more strength with noise reduction and quiet recording on their eight preamp inputs.

While the differences aren't what we'd consider stark, we've listed the biggest variations in the list below:

Both devices receive largely positive reviews from where they're sold. We looked at reviews primarily from Sweetwater, Guitar Center, and Reverb.com The Clarett is a little less likely to have negative reviews, though doesn't seem to garner as many reviews as the Quantum.

For pro-level recording, there isn't much to dislike about either unit.

In this section we've listed the Clarett and Quantum along with a couple other interfaces we like, and linked them to our partner, Sweetwater. While this partnership helps support Guitar Chalk, it in no way decreases the objectivity in our reviews or product recommendations. Thank you for your support.

Table of Contents (click to jump)
Where PreSonus and Focusrite Differ in Quality
Compare to Similar Interface Models
PreSonus Quantum VS Focusrite Clarett: The Basics & Comparing Specs
If Your Priority is Speed
If Your Priority is Price and Noise Reduction
Which software package is better?
Are they both compatible with Mac and PC?
Conclusion

In this section we've used a single table to compare the basic specs and a few grading categories for the PreSonus Quantum and the Focusrite Clarett. We should note that this is the Clarett 8Pre, which is how we've counted things like preamps and input/output options. We'll discuss more about the two interfaces below the comparison table.

If Your Priority is Speed

Let's assume you just want the faster of the two and you're concerned with things like recording latency and connection speed. To be sure, both are extremely fast, but the Thunderbolt connection on the Quantum is going to give you the latest technology when it comes to recording speed and is preferable over USB. 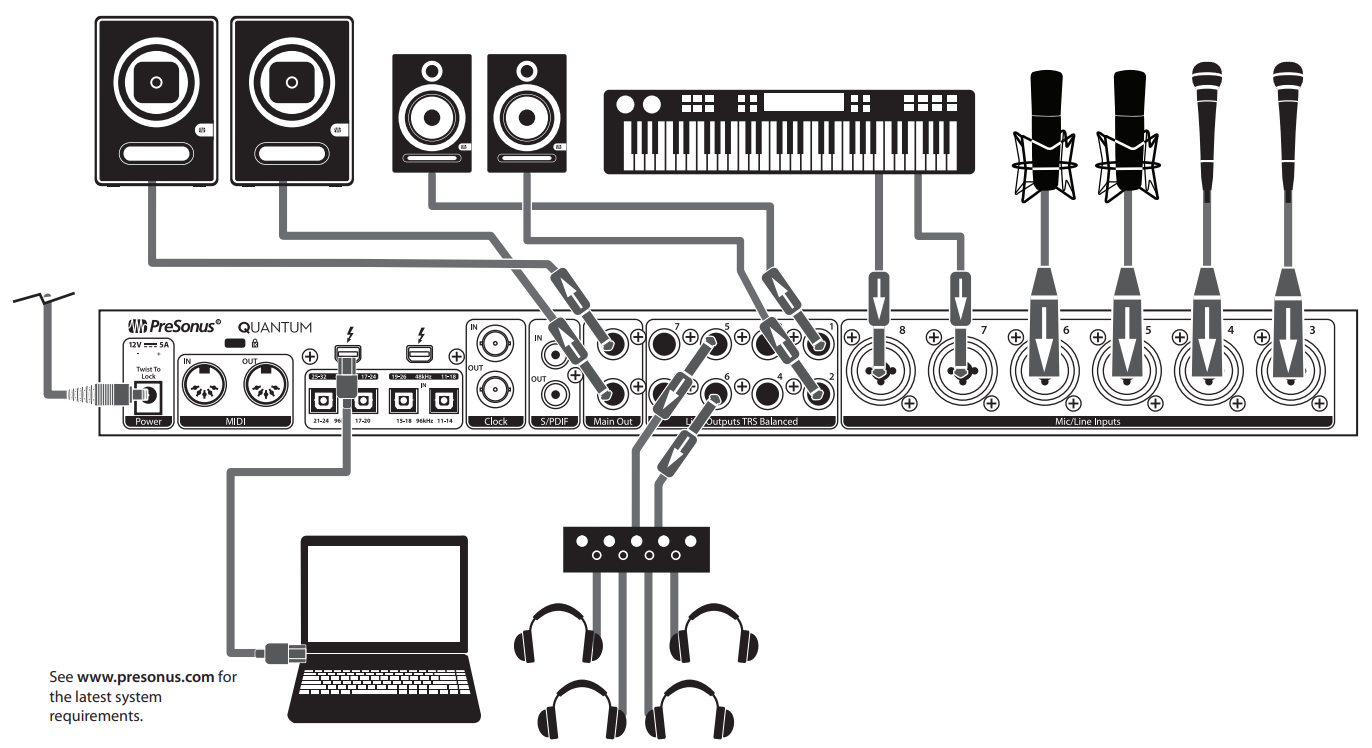 From the user manual, here's one of the ways you could hook up peripherals to the PreSonus Quantum. Image via PreSonus

Make Sure You have a Thunderbolt Connection

Another thing we should note (that might be obvious anyway) is that you should make sure your computer that runs your DAW software has a Thunderbolt port. Most commonly, this would be a Mac, though you can buy PC's and graphics cards with Thunderbolt ports as well.

The most ideal fit for the PreSonus Quantum would be a semi-pro or pro recording studio that runs newer Mac computers and needs a super-fast, reliable connection. If your computer already has a Thunderbolt port, it would be hard for us to advise passing it up for the USB connection.

If Your Priority is Price and Noise Reduction

While the Clarett series is still really fast, they're known more for their noise handling, recording clarity and being a bit cheaper than similar interface designs. While the Clarett 8Pre runs on a USB port, this could be a better fit for those without a Mac and without access to - or interest in - a Thunderbolt connection.

For simpler recording setups, perhaps home or mid-sized studios, we'd recommend the Clarett 8Pre which gives you the same number of preamps and a similar i/o profile

How to Setup the Focusrite Clarett 8Pre 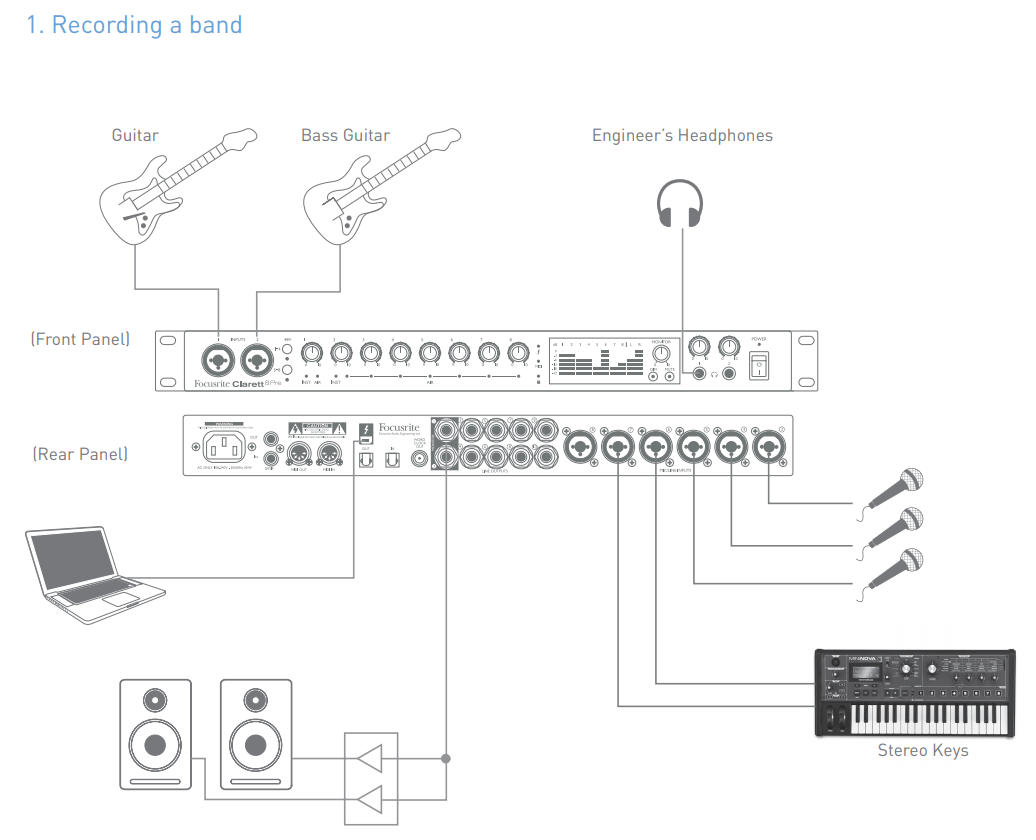 From the user manual, a setup diagram for the Focusrite Clarett 8Pre. Image via Focusrite

A Good fit for PC Recording

Particularly for those who are planning to record through a DAW on a PC, the Clarett will save you a little money in the form of a cheaper unit, and by saving you from forking over more money for the Thunderbolt graphics card upgrade. That doesn't even count the time and headache that you'll have to spend installing the graphics card.

To round out the Clarett's most optimal home, we would recommend it for lower-budget studios or home recording situations running a PC or non-Thunderbolt setup. Noise reduction is also a plus.

Which software package is better? 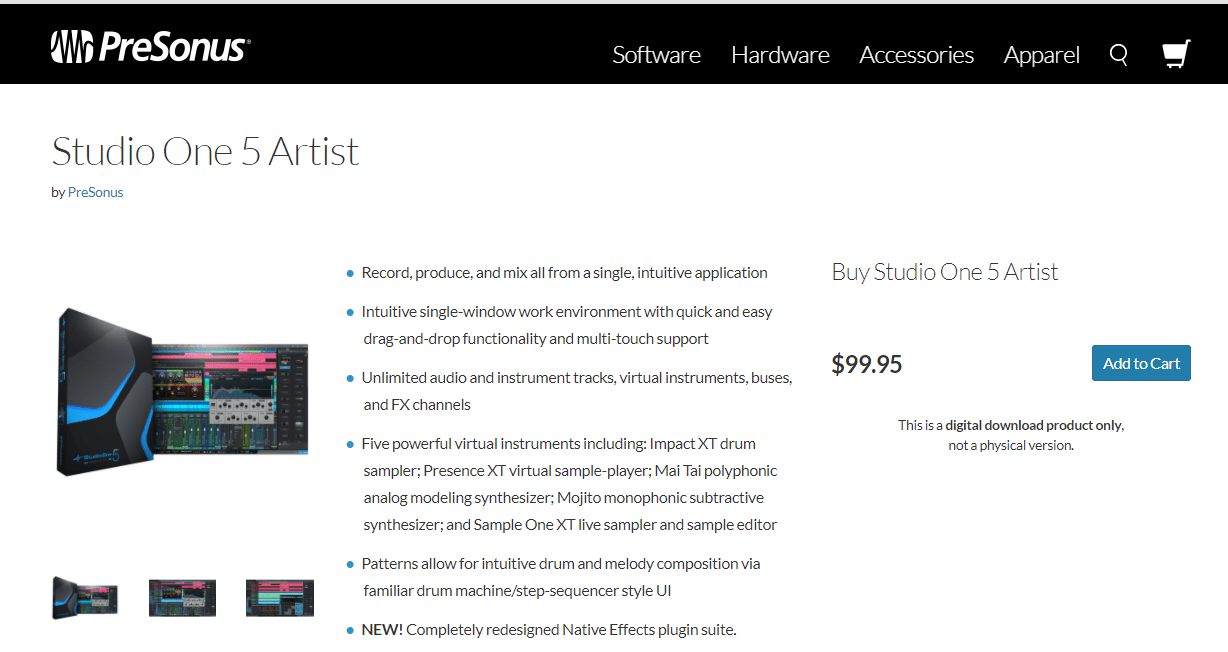 The PreSonus Quantum comes with Studio One Artist, which we'd prefer over the Focusrite software. Image via PreSonus

PreSonus packages the Quantum with Studio One Artist which would be around $100 by itself. While Focusrite includes Ableton Live Lite, they do a software suite that's mostly Focusrite-developed trials and not full DAWs. While their software isn't bad, Ableton Live Lite is free to download anyway, so we'd have to go with the Quantum if we're looking for the more professional-grade software package.

Are they both compatible with Mac and PC?

The latest MacOS and Windows 10 are advisable in either scenario.

At the end of our comparison, there isn't a ton of dramatic difference between the two units. If it came down to brand loyalty for you, it would be hard to go wrong either way as both companies have a reputation for making some of best recording interfaces in the industry.

We'd recommend taking stock of your computer situation and making sure the ports match up.

Otherwise, it's a good deal no matter which direction you go.

If you don't need that many ports, make sure to checkout Clarett and Quantum models with fewer preamps and i/o options for cheaper versions of similar interfaces.

Do you have questions about our Quantum VS Clarett comparison?

If so, feel free to drop those down in the comments section below and we'll do our best to help out.

Written by GC Editorial on Recording and Roundups