While there are subtle differences between these two guitars (primarily the fret count), they are largely similar on the spec sheet. Though since the Custom 22 is now a lot harder to find, we'd recommend going with the Custom 24, if you're going to buy new. If you're scouring the used markets, the Custom 22 can now be had at a decent discount.

But are there other differences?

We'll find out, in this comparison.

Each guitar will get its own column in a table where we'll compare spec sheets, then give some basic grading for a few categories to each guitar. At the end of this comparison, you'll know exactly where the two instruments differ.

Note that this comparison deals primarily with the mainline PRS Custom 24 and 22, and not the cheaper Custom 24 SE and 22 SE. Those guitars have dramatically different specs and are actually made at a different factory than PRS headquarters in Maryland.

We'll be focusing on the far more expensive Custom 24 and 22. If you have questions, feel free to drop them in the comments section below.

To the naked eye there's little to tell these two guitars apart. Even the aforementioned difference in fret count is hard to notice, unless you're sure of what you're looking for. In this table, you can quickly compare the two guitars and look at pricing, as well as some basic specs, which is handy if you don't want to go through the entire article.

Use the compare buttons to see the info.

Also, consider using the orange Sweetwater buttons if you do decide to shop. They help support our site at no extra cost to you.

Either way, enjoy the comparison. 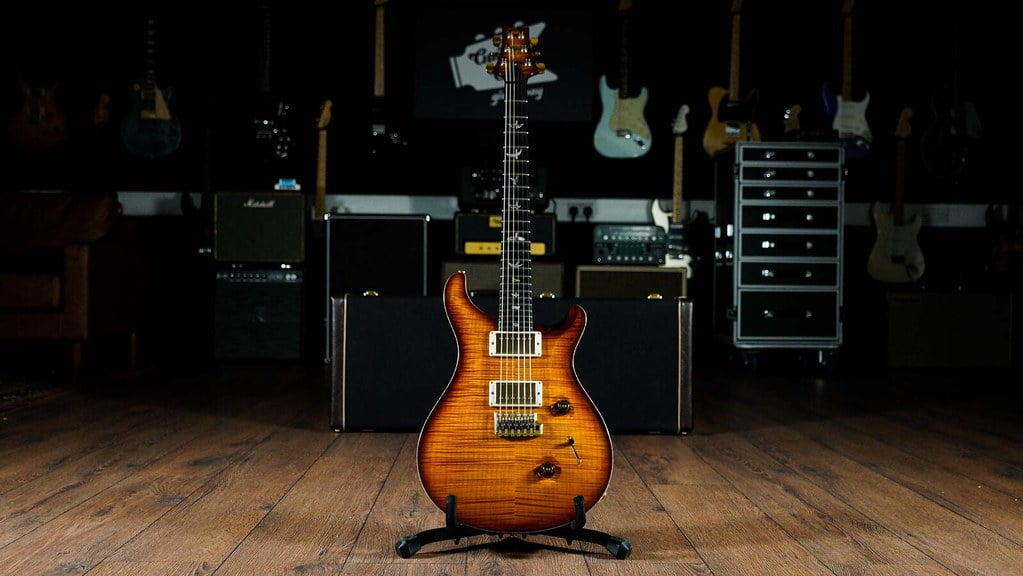 The PRS Custom 24 is simply one of the nicest electric guitars money can buy. Flickr Commons image via Dark Dwarf

In a one-to-one specs comparison there aren't a ton of distinctions. Keep in mind, the red cells indicate that there is a value and/or quality issue at play. For example, the Custom 24 has slightly better pickups than the Custom 22, causing us to highlight that difference in red, meaning there is a difference in quality.

Yellow cells are marking a difference that has no significant value or quality consequence, like the body shape or the number of frets.

When comparing the Custom 24 and Custom 22, we need to keep in mind that they are extremely similar guitars.

While there is a slight difference in price (the Custom 24 is a bit more expensive) the main difference we highlighted with a quality impact is the TCI-tuned humbuckers, which I'll explain more in the paragraph below the table.

What are TCI pickups?

The TCI-tuned 85/15 humbuckers in the Custom 24 are a more particularly tuned pickup that give off a certain "timbre," meant to be specific to the electric guitar it's designed with. In technical terms, it puts the capacitance and inductance of the coils at a vary particular spot, which essentially means the pickup is tailored to that guitar. For this reason, we'd rather have the TCI-tuned pickups in the Custom 24.

If you really want to dig into the difference and hear the TCI-tuned pickups, Paul himself explains it (and demos it) a lot better than I do.

This is likely what accounts for the additional cost in the PRS Custom 24, aside from the added fret space. While PRS doesn't sell these pickups individually, it stands to reason that the non-TCI-tuned pickups are going to be a little bit cheaper.

When considering which one is more ideal for you, this and the extended fretboard are your two main focal points.

Together, they're accounting for the minimal difference in cost.

But as we see in the grading table, there just isn't a lot of difference between these two guitars. This shows in the pricing structure and the spec sheet. Both are fantastic instruments, with little in the way of weak spots or corner cutting. PRS did a great job here so we'd recommend buying confidently regardless of the model you choose.

We graded the Custom 24 down a bit since it costs more, but the pricing difference isn't significant enough to make this a deal breaker. Both guitars are reasonably priced given the typical retail numbers we see from the mainline PRS guitars. They're also in keeping with the historical trends of both the Custom 24 and Custom 22 series.

How much do the TCI-tuned pickups matter to you?

It would be great if PRS sold these pickups as a standalone product. We've yet to see them go in this direction, which is surprising, given how much detail and work they put into their pickup design.

But regardless of the pickup difference, it's hard to find anything worth complaining about in a direct PRS Custom 24 and Custom 22 comparison.

They are essentially the same instrument, with very minor differences separating them on the spec sheet and the resulting tone.

If you don't mind the steep price tag - which is required for either model - you can't go wrong.

Feel free to leave questions about the 24 and 22 in the comments section below, and I'll do my best to help out.

Written by GC Editorial on Electrics and Reviews